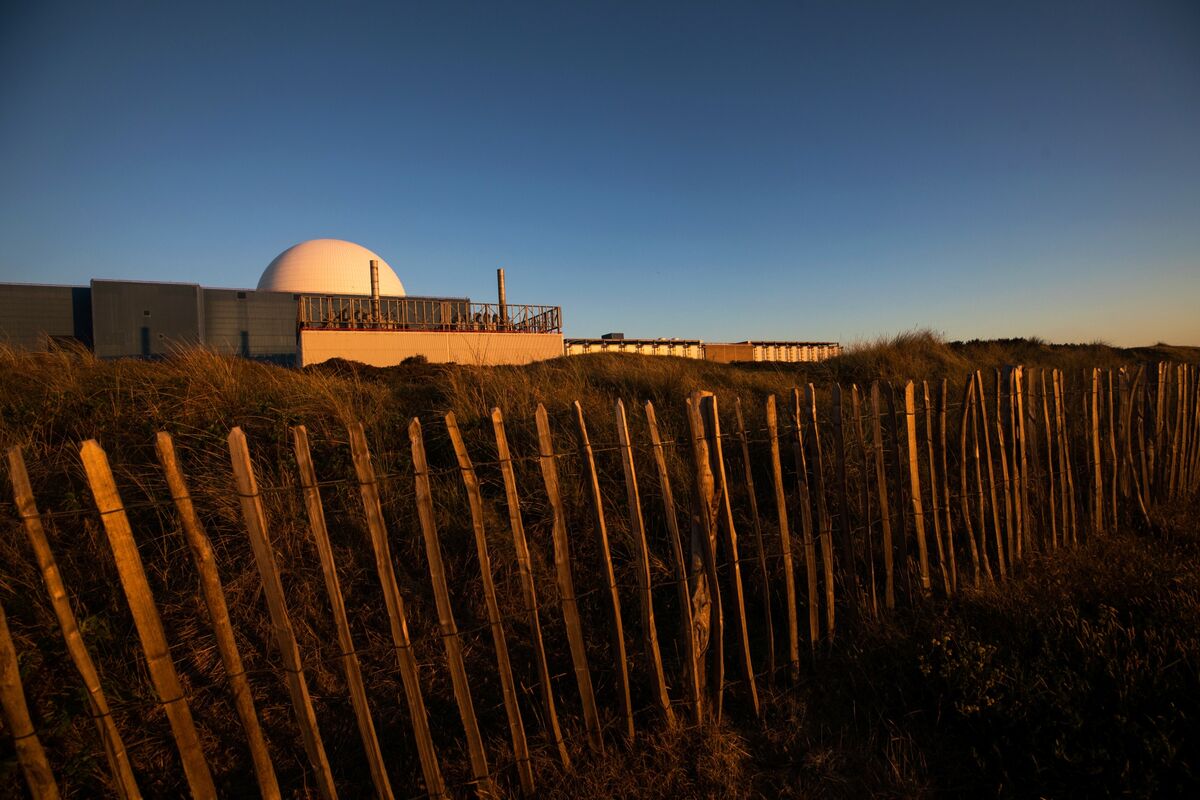 National Grid Plc has agreed a deal with

Electricite de France SA to cut supply at its Sizewell nuclear plant by half for at least six weeks, according to a person familiar with the matter.

EDF posted an outage on its transparency website for its 603 megawatt Sizewell B-1 from April 14 to May 30.

Demand usually starts to drop in spring and is at its lowest in summer. Blackouts can happen when theres too much demand or too little. National Grid needs ways to cope with such low demand on the network especially when its happening at the same time as high wind or solar levels.

second year that the U.K. grid operator has needed to pay Sizewell to turn down to help balance the grid. Last year demand was low due to pandemic-related lockdowns. The initial contract previously cost as much as 23 million pounds in the six weeks to June 19 and was later extended through to September. Bombardier Has Momentum Even After Fourfold Stock Jump, CEO...

Bombardier Inc. Chief Executive Officer Eric Martel has a message for investors who are uneasy about the stocks room to run after a...
Read more

Forecasters Are Running Out of Hurricane Names (Again)

The 2021 hurricane season is on track to run out of names from a list of 21.
Read more

Rory Burns is caught behind off Shardul Thakur for 50 as India make the breakthrough, reducing England to 100-1 as they chase 368 to win the fourth Test at The Oval.
Read more

"We are in a second golden age of space exploration and development," Mike Gold, executive vice president of Redwire Space, said.
Read more

Infrastructure day in the House

China's growth in new home prices slowed in July for the first time in five months, with smaller cities especially weighed down by higher mortgage rates, price caps on resale homes and other steps to cool speculation, a private-sector survey showed on Sunday.
Read more

Cheney: I didn’t invite Trump to GOP retreat in...

House GOP Conference Chair Liz Cheney (R-Wyo.) said Tuesday she did not invite former President Trump to address House Republicans at their policy retreat next week in Florida.Trump, who has b...
Read more

QatarEnergy has signed a deal for a 40% stake in one of ExxonMobil’s (XOM.N) major offshore explorations in Canada, the Qatar state-owned oil and gas firm said on Sunday.
Read more

Containers at the edge: Why the hold-up&quest;

Cloud-native software like Kubernetes is well-positioned to facilitate innovation in IoT and edge hardware.
Read more

Conventional wisdom in Washington is that the party in control of the White House usually loses congressional seats in the midterms.
Read more

Osius said he was optimistic that the Biden administration would soon launch talks with members of ASEAN on a digital trade agreement.
Read more

Intel’s Raptor Lake with 24-core CPU could take on...

Hogwarts Legacy is already too toxic for some gamers

We explore whether Hogwarts Legacy can survive the controversy surrounding it and its creator - and whether it should.
Read more

Two sheriff's deputies are being praised for saving a man from a burning car. As CBSN's Michelle Miller and Elaine Quijano show us, the whole rescue was captured on their body cameras.
Read more

Tiger Woods told responding deputies after crash he ‘did...

Tiger Woods reportedly told Los Angeles sheriff’s deputies after his crash that he could not remember driving and wasn’t sure how the crash happened.
Read more

A Facebook content moderator called on Irish lawmakers to regulate the social media giant's approach to policing its platform during a hearing Wednesday.Isabella Plunkett testified that during her job reviewing con...
Read more

The remaining part of the Surfside, Fla. condo building that suffered a devastating collapse more than a week ago was demolished Sunday night as crews prepare for a tropical storm heading to the area....
Read more

The Time to Buy Your Holiday Presents Is Now

Supply chain problems haven’t improved. If you want to gift something special, here's how to plan ahead.
Read more

The family of Daunte Wright is demanding more severe charges against the former police officer who fatally shot the Black 20-year-old during a traffic stop in the Minneapolis suburb of Brooklyn Center....
Read more

Lionel Messi struggles to make an impact on his first start for Paris St-Germain as they are held to a draw at Club Bruges.
Read more

The consumer price index jumped 6.2% in the last year. Some economists say President Biden’s Build Back Better plan would help stabilize the economy, but others disagree. Christina Ruffini has more.
Read more

England boss Gareth Southgate will announce on Tuesday who has made the final cut as he whittles his provisional 33-man squad for Euro 2020 down to 26.
Read more

The French leader tries to improve links with Africa but his undiplomatic language may get in the way.
Read more

Earlier this year, Peyton Elizabeth Lee took some time off from shooting her Disney+ Original Series, “Doogie Kamealoha, M.D.”, and spent a fun-filled weekend at Aulani, A Disney Resort & Spa! Check out the video below to see how Peyton spent her weekend at A…
Read more

John Boyd Jr., the president of the National Black Farmers Association, called on Sen. Lindsey Graham (R-S.C.) to apologize for comments he made recently ...
Read more

Cladding: ‘We’re paying to live in a dark, dull...

A Birmingham tower block resident, where combustible cladding is being removed, explains his plight.
Read more

Did Joe Biden pack the Supreme Court commission to...

The institution cannot be reinvented in a matter of months.
Read more

What If Clippy Was Your Life Coach?

Immersive theater group Future Proof's new dating sim PSweet is set inside a Microsoft Office-esque world, and it's every bit as odd and amazing as you'd imagine.
Read more

A Texas death row inmate set to be executed for killing a convenience store worker more than 17 years ago in a robbery that garnered $1.25 is asking that his pastor be allowed to lay hands on him as he dies by lethal injection
Read more

David Beckham urged to speak out on Qatar World...

Prime Minister Boris Johnson sought to calm stormy waters over fishing with France on Friday as he flew to Rome for a G-20 summit, where he is due to meet French President Emmanuel Macron
Read more

Multiple women who have accused Bill Cosby of sexual assault and their supporters gathered at Independence Mall in Philadelphia on Saturday night to protest the release of the comic from prison.
Read more

A debate over competing amendments to regulate cryptocurrency is creating a new hurdle for the Senate to complete work on a $1.2 trillion bipartisan infrastructure bill.Am amendment offered by two Republicans and t...
Read more

The family of Saniyya Dennis is pleading for help in any information that can lead to finding the missing college sophomore.
Read more

"Eisenhower's interstate system should be torn up or else the commies will be able to conveniently drive!" the Ilinois Republican congressman quipped.
Read more

The SNP leader denies claims she could seek to hold an "illegal" referendum if her party wins a majority.
Read more

Boss Jonas Eidevall says Arsenal do not fear Barcelona and that starting their Women's Champions League campaign against the holders is exciting.
Read more

Ex-top cop Bratton: Defund the police? We’re at the...

#DefundThePolice was a catchy hashtag driving policy. However, policy needs to be based on facts, figures, and an understanding of the issues.
Read more

A federal court on Thursday nixed a Trump-era rule that limited state and tribal authority to block projects that could impact their waters, including pipelines. California Federal Judge William ...
Read more

Our pick for best budget single-serve coffee maker is...

The Sboly Single-Serve Coffee Brewer, our pick for the best budget single-serve option on the market. And, right now, you can score the Sboly on sale.
Read more

More than 37 million Americans set to travel for...

Airports across the country are gearing up for a busy Memorial Day weekend as millions resume traveling. CBS News transportation correspondent Errol Barnett joins "CBSN AM" to talk more about new, low-cost options for flyers and what airports are doing to pre…
Read more

Kellyn Acosta walked off with his head bandaged, Matt Turner juggled multiple balls that were tossed in during the final few minutes, when security twice chased fans off the field.
Read more

California Attorney General Rob Bonta (D) on Monday announced that he would be opening an investigation into the Southern California oil spill that shut down miles of beaches in Orange County for several days.Accor...
Read more

India pass up the opportunity to press for victory on the final day as the one-off day-night Test against Australia in Carrara ends in a draw.
Read more

Bitcoin hit a six-month high and was within striking distance of a record on Tuesday as traders bet an anticipated listing of a futures-based U.S. exchange traded fund could herald investment flows into bitcoin and cryptocurrency assets.
Read more

Why a hand gesture has South Korean companies on...

Anti-feminists in South Korea are increasingly pushing companies to repent for what they see as a conspiracy within the government and private companies to promote a feminist agenda.
Read more

Falwell invites students to ‘real Liberty graduation’ at his...

Bournemouth enhance their play-off bid and deal a blow to Middlesbrough's own hopes of a top-six finish with a hard-fought win.
Read more

Twenty-time Grand Slam champion Roger Federer pulls out of the Tokyo Olympics because of a knee injury.
Read more

FedEx almost stole Christmas in Denver. A YouTube video posted shows packages falling out of the back of a truck as it drove down a highway. Kelly Worthman of KCNC shows us how one family's good deed saved the holidays for many Coloradans.
Read more

Push for electric cars gets a boost after fuel...

Fuel is flowing once again through the long Colonial Pipeline following a six-day disruption from a cyberattack. But the problems caused by the incident may have more drivers thinking about making a change. CBS News meteorologist and climate specialist Jeff B…
Read more

Lucid Says Air Sedan Will Be First Car in...

Lucid Group Inc. said its debut battery-electric vehicle will be the first production car in the U.S. to include a purpose-built laser sensor,...
Read more

With only minor updates over the original Canon EOS M50, can the M50 Mark II compete against newer entry-level cameras?
Read more

Benjamin Monk was found guilty of killing ex-footballer Dalian Atkinson during a stand-off in 2016.
Read more

The 37-year-old was held after incidents at three stores in west London on Wednesday evening.
Read more

According to a new paper, the company’s own research showed that human activity was a contributor, but public statements suggested otherwise.
Read more

"Look, this is not about red states and blue states. It's literally about life and death," the president said.
Read more

The Latest: China has administered 65M vaccine doses at home