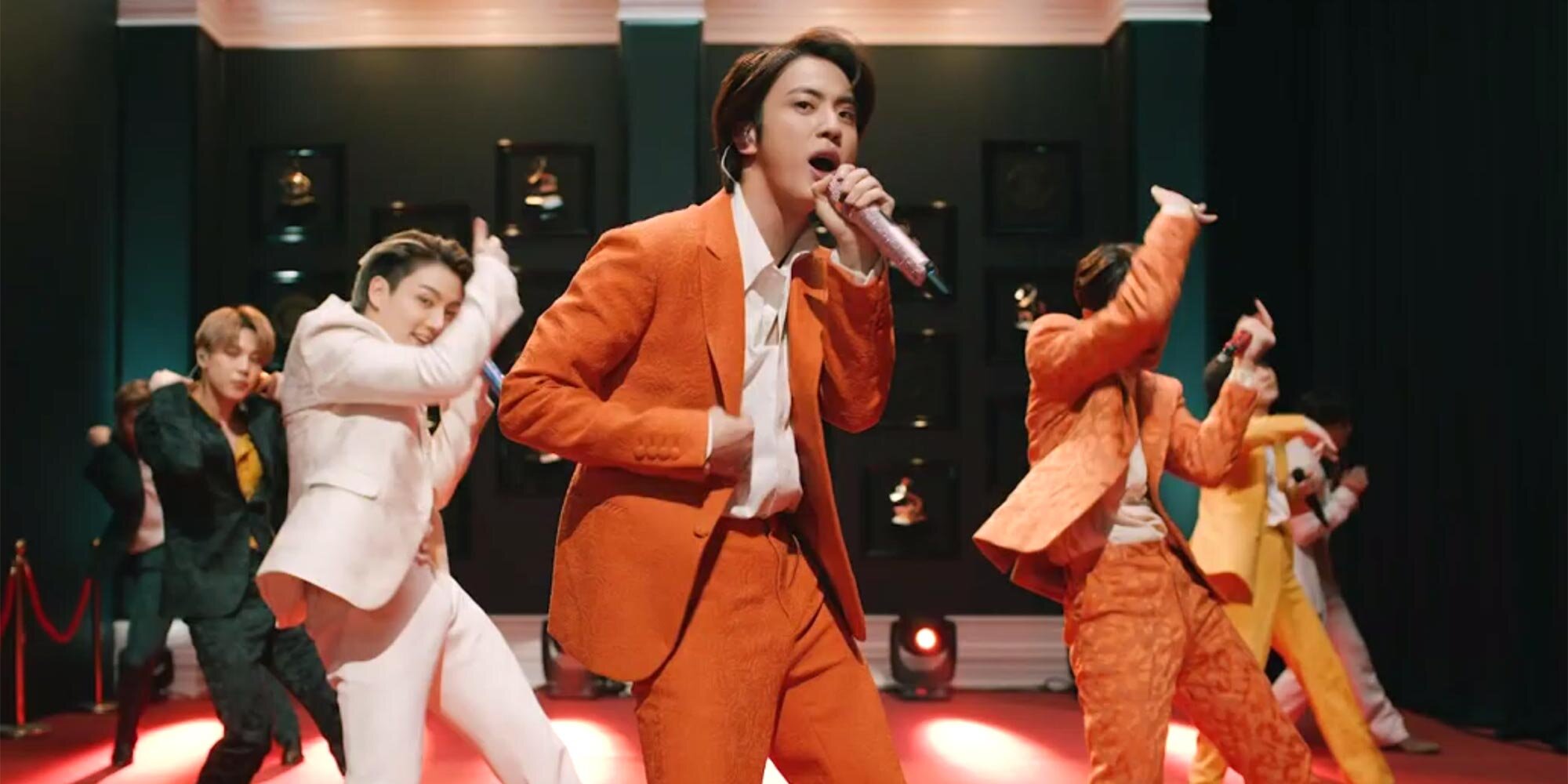 BTS lit it up like dynamite on Sunday — and ticked off another major milestone, putting in their first ever solo performance at the Grammys.

The band had previously appeared during past music’s biggest night ceremonies, having performed their “Old Town Road” remix with Lil Nas X in 2020, and presenting Best R&B Album in 2018. This year, they brought their chart-topping “Dynamite” to the Grammys stage.

Kicking things off from inside a plush velvet plume, the group showed off their razor-sharp dance moves before slickly moving over to a re-creation of the Grammys red carpet (according to host Trevor Noah, BTS did not end up traveling to Los Angeles for the ceremony due to pandemic restrictions, so they recreated as many Grammys set pieces as they could. The group soon moved their way up a steel stairwell and found themselves on top of a giant skyscraper in downtown Seoul. It was a fittingly sky-high send-off for one of the biggest band’s in the world.

In addition to performing, the K-pop superstars also snagged their first ever musical Grammy nomination, for Best Pop Duo/Group Performance (they ended up losing to Lady Gaga and Ariana Grande’s “Rain on Me”). Pistorius sentenced to five years in prison for killing...

Cybercriminals could be watching your home security footage

HAPPY FRIDAY! Welcome to Overnight Energy, your source for the day's energy and environment news. Please send tips and comments to Rachel Frazin at ...
Read more

WSJ editorial board: ‘Purging Liz Cheney for honesty would...

The conservative Wall Street Journal editorial board waded into the debate over Rep. Liz Cheney (R-Wyo.), warning House Republicans that an internal feud over her criticism of former President Trump could jeopardize poten...
Read more

President Biden has met with Jerome Powell and Lael Brainard, who are both regarded as potential choices for the position of Federal Reserve Chair, ...
Read more

President Joe Biden signaled in a town hall-style event Thursday he was open to eliminating the filibuster, as several key pieces of his agenda are held up by the 60-vote threshold needed in the Senate. CBS News senior White House correspondent Weijia Jiang j…
Read more

Thousands of Syrians in the last opposition-held area of the country held a protest Monday, marking 10 years since the start of a popular uprising against President Bashar Assad’s rule that later turned into an insurgency and civil war
Read more

Italy Back in Lockdown as Draghi Vows to Speed...

Most of Italy returned to lockdown Monday amid a resurgence in infections to levels last seen in November. Prime Minister Mario Draghi pledges to triple the pace of vaccinations in April. Bloomberg's Tommaso Ebhardt reports. (Source: Bloomberg)
Read more

NCAA urged to funnel more money into women's basketball because it's a growing sport with a bucket of revenue in the offing.
Read more

Nearly one-third of Singapore’s residents now support living with Covid-19, a poll showed, after a push by its leader to treat the pathogen as endemic.
Read more

Unison, Unite and the Royal College of Nursing have put the offer to their members without recommendation.
Read more

A look at the day ahead from Danilo Masoni.
Read more

In approving the first new Alzheimer's drug in nearly 20 years, the U.S. Food and Drug Administration is taking its biggest risk yet with a strategy that allows new therapies onto the market without strong evidence that they work, regulatory and scientific ex…
Read more

Deadly attacks on Black trans women are going up....

It took Stephanie Houston a while to accept her transgender daughter, who was gunned down in the street two years ago in Dallas. But now she's determined to help other trans women avoid the same fate
Read more

An inquest heard witnesses tried to save the men from their burning car, but the fire was too intense.
Read more

Portugal is tightening its flight restrictions due to COVID-19, introducing stricter limits on arrivals from other European Union countries where the pandemic has worsened
Read more

Analysis: Biden lost faith in the U.S. mission in...

President Joe Biden's frustrations with Afghanistan boiled over more than a decade ago, and they never again eased.
Read more

Fernando Karadima, a Chilean priest who was at the center of a sexual abuse scandal that shook the Catholic Church in Chile and who was eventually defrocked by the pope, has died
Read more

On Tuesday, hundreds of Israeli ultranationalists, some chanting "Death to Arabs," paraded in east Jerusalem in a show of force that threatened to spark renewed violence.
Read more

Not giving up: Afghan relatives in UK reach out...

Biden wants quick action on gun violence, even as...

The president said he’d pursue executive action on day one. It’s day 63. And after two high profile shootings, advocates are wondering when that action will come.
Read more

Turkish President Recep Tayyip Erdoğan said that his country is moving ahead with plans to purchase another Russian air defense system, despite warnings from the U.S. and other NATO allies that the move could have d...
Read more

Through the Lens of Nat Geo: Underwater Photographers Tackle...

Richard Yetsenga on the Markets (Radio)

Leicestershire fight back to claim a thrilling one-run win at home after a spectacular late Surrey collapse.
Read more

British singer songwriter Sir Elton John married David Furnish over the weekend after the U.K legalized same-sex marriage in March 2014. And Amy Adams stars as an unsung artist who helped deceive the art world. Wendy Gillette has that and more in your Eye on …
Read more

Savanna Greywind was eight months pregnant when she disappeared from her neighbor's Fargo apartment Aug. 19. Days after her newborn was found alive with the neighbor, Greywind was found slain. Charges are expected in the death.
Read more

Michelle Stewart's kidneys are failing. She's on the list for a transplant, but her husband is trying to speed up the process of finding a match by putting a sign on his truck that says, "Type O Blood, Wife Needs Kidney." The Colorado couple is getting a mass…
Read more

Nothing Ear 1 set to get a discount during...

Nothing Ear 1 is set to get a Rs 500 discount during the Flipkart Big Billion Days Sale which will bring the price down to Rs 5,499.
Read more

Gov. Mike DeWine's announcement of a weekly $1 million prize to entice Ohioans to get coronavirus vaccines is raising questions and objections
Read more

Roblox Corp. may be close to fixing an outage that has plagued the video game company for at least a second straight day.
Read more

Breakthrough Energy is working with nonprofit CDP to boost the market for clean tech, even before it’s ready
Read more

President Biden on Tuesday praised Carl Nassib and Kumi Yokoyama, two professional athletes who recently came out to the public, saying that their decision means that "countless kids around the world are seeing themselves...
Read more

In 1973, young British couple Tony and Maureen Wheeler published a guidebook entitled "Across Asia on The Cheap." Little did they know that one humble guidebook would lay the foundation for a worldwide travel brand called Lonely Planet.
Read more

Read this guide to know how you can watch a hockey at Olympics 2020 live stream and the streaming options available.
Read more

Fauci looks to boost vaccines as US infections rise

The US daily death toll from Covid-19 has risen above 2,000 for the first time since February.
Read more

Bars, restaurants and gyms can reopen in Auckland from early December but customers will be required to show proof they’ve been fully vaccinated
Read more

Beds full at Kansas City hospitals amid surge in...

The University of Kansas Health System beds are full and are causing transfer patients to be turned away amid a surge in coronavirus cases."I think we're at a tipping point," the sys...
Read more

In the early days of building his email-marketing startup Mailchimp, Ben Chestnut was warned by venture capitalists about the company’s imminent demise should he not take their money and advice.
Read more

The final weekend of campaigning for the primary in Ohio's 11th Congressional District brought to life the divisions that still exist deep inside the Democratic Party, despite broader signs of unity during the first six months of the Biden administration.
Read more

Dr. Jason Valentine, a physician at Mobile’s Diagnostic and Medical Clinic Infirmary Health, recently posted a photo on his Facebook page showing him posed next to a sign that says, “Effective Oct. 1, 2021, Dr. Valentine will no longer see patients that are n…
Read more

Presented by A Healthy Future, LLC Good Friday morning! New Jersey just lost a very dubious distinction. For pretty much all of the pandemic up...
Read more

Japan seeks to end COVID-19 state of emergency this...

The Japanese government will seek advisers' approval to lift the state of emergency in all regions on Oct. 1 as the number of new coronavirus cases falls and the strain on the medical system eases, Economy Minister Yasutoshi Nishimura said on Tuesday.
Read more

Sudan to Develop Gold Mines Once Linked to Warlord’s...

Sudan dispatched a research team to revitalize a network of gold mines in Darfur previously linked to the family of the country’s most powerful militia leader.
Read more

Egypt’s leader meets with Libyan officials to push for...

Rep. Alexandria Ocasio-Cortez (D-N.Y.) on Sunday said she thinks liberal Justice Stephen Breyer should retire at the end of the court's term, which could allow President Biden to nominate his successor and a Democratic Se...
Read more

‘Football must not be complacent’ – survivors respond to...

Survivors of child sexual abuse say football must not be complacent after a review into historical abuse in the sport was published.
Read more

Attorney sues to stop ‘most severe’ vaccine mandate at...

An attorney representing students at Indiana University in Bloomington, Indiana, told Fox News' Tucker Carlson on Monday that it is unconstitutional for it or any institution to mandate a coronavirus jab in order to enroll in classes.
Read more

Former President Trump is teasing that his supporters will be "very happy" with his decision on whether to run in the 2024 White House race."The answer is I'm absolutely enthused. I look forward to doing an announc...
Read more

The Doobie Brothers are celebrating their 50th anniversary in their 51st year, heading out on a delayed tour and hoping they can keep doing what their big hits call for: taking it to the streets and letting audiences listen to the music
Read more

Threats against members of Congress doubled in 2021, Capitol...

Ghislaine Maxwell told a federal judge in New York that sex-trafficking charges against her should be dropped because of the Wednesday ruling by the Pennsylvania Supreme Court overturning Bill Cosby’s sexual assault conviction.
Read more

Facebook has targeted and removed a Russian disinformation campaign that claimed that coronavirus vaccines could turn people into chimpanzees.Facebook took down 65 Facebook accounts and 243 accou...
Read more

Police ruled the deaths suicides; the families say their loved ones were lynched.
Read more

Caris LeVert made his return to NBA action on Saturday night after undergoing surgery to remove a cancerous mass on his kidney almost two months ago.
Read more

Biden’s Judiciary: A Tower of Babel