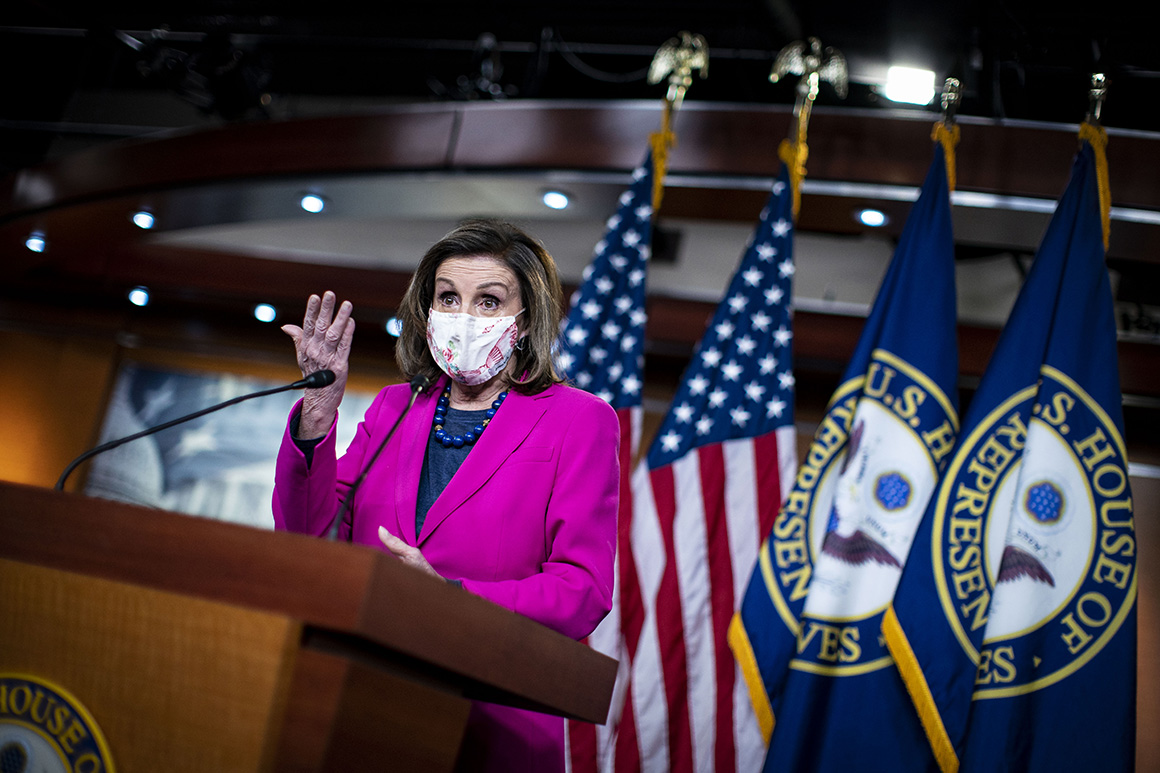 But, nonetheless, hopefully we will have bipartisanship.

The speaker said shed instructed chairs for committees of jurisdiction to begin outreach to their Republican counterparts on upcoming legislation.

Pelosi said whatever package lawmakers end up crafting must be fiscally sound and that Democrats were examining tax credits, the tax code, the appropriations process and bonding authority among other ways to pay for new spending, which Republicans are likely to criticize.

This is job creating, which creates revenue that comes back to the Treasury, unlike what the Republicans did with their tax scam in 2017, which gave 83 percent of the benefits to the top 1 percent, and debted to the tune of nearly $1.9 trillion … added to the national debt, Pelosi said. They should be the last people talking about what is too expensive for the American people as we meet their needs.

In a separate interview on This Week on Sunday, Wyoming Sen. John Barrasso, the No. 3 Senate Republican, said he would really like to see bipartisanship on infrastructure, but added that in the last Congress, House Democrats modified a major Senate highway package in a way that the Republican majority in the Senate couldn’t accept.

They ignored what we have done in a bipartisan way, Barrasso said. If they would take the model we came up with in the committee and the Senate for highway and transportation, I think that’s a very good start. I talked with the secretary of Transportation, Pete Buttigieg about it, and I think that is the model in which we should move forward on transportation and infrastructure. Overnight Defense & National Security — Biden: US troops to Ukraine ‘not on the table’

Swedish lithium-ion battery maker Northvolt said on Wednesday it had raised $2.75 billion in equity to expand its factory in Sweden to 60 GWh from 40GWh to meet increased demand from key customers.
Read more

Did an item found in many medicine cabinets play a role in the death of a millionaire? "48 Hours" correspondent Peter Van Sant reports.
Read more

Google Settles With Employee Who Said He Was Fired...

Google has settled with a software engineer who the U.S. labor board alleged was fired for his workplace activism, one of five employees the government recently accused the company of terminating for exercising their legally protected rights.
Read more

Northern California's Butte County, the site of the state's deadliest and most destructive inferno ever in 2018, is now battling another blaze.
Read more

Snap is being sued by the parents of two men, who allege the filter's "negligent design" caused deaths.
Read more

Florida Republicans have sent a proposal to Gov. Ron DeSantis that would ban transgender girls and women from playing on public school teams intended for student athletes born as girls
Read more

Nearly half of FTSE 100 companies have no net-zero...

Nearly half of the 100 biggest companies listed on Britain's FTSE Index have no net-zero target at all and just 23 have a scientifically approved plan, according to ESG investment research and asset manager Arabesque.
Read more

The Brood X cicadas have already arrived in the Northeastern U.S., causing excitement for many foodies looking to eat the delicacy. Some experts say eating cicadas is not only good for you, but it can also help the environment. Jessica Fanzo is a professor of…
Read more

Prince Harry and Meghan, the Duke and Duchess of Sussex, joined other celebrities at a New York City concert to encourage people to get vaccinated....
Read more

The Ultenic U11 comes packed with add-ons and extras, but lacks the suction power to be your primary vacuum cleaner.
Read more

Two Chicago hospital executives have been reprimanded for COVID-19 vaccine events that improperly gave shots to people far from the West Side facility, including one held for workers at Trump Tower
Read more

No new COVID-19 deaths were recorded in England, Northern Ireland and Scotland on Monday while Wales reported four new deaths, marking an impressive milestone for the U.K. as figures continue to drop following vacci...
Read more

Major and Champ Biden are proving everything in Washington is political, even presidential pets.From starring roles on the official White House Easter eggs to being featured in a fundraising pitch from the Democratic National Committee (DNC),...
Read more

Ofcom lays out new rules for TikTok and Twitch

Video-sharing platforms have a legal duty to enforce strict rules - or be fined or even suspended.
Read more

An argument in downtown Austin turned violent early Sunday when a group of men fired their guns at each other, injuring two people.
Read more

Asked if she will accept Paul Givan as first minister, Michelle O'Neill says deals must be honoured.
Read more

Kyrie Irving added 18 points and Landry Shamet had 15 off the bench.
Read more

The Biden administration and congressional Democrats are working together to dismantle the U.S. oil and gas sector, making it harder to run current energy operations and banning new drilling and pipelines.
Read more

Woman dies after being pulled from water at Helensburgh...

A man has been arrested in connection with the incident which happened in Helensburgh on Friday.
Read more

MSNBC anchor Stephanie Ruhle is taking Dollar Tree to task over its shocking announcement that its merchandise will no longer cost customers a dollar.
Read more

Cuomo fires back at sheriff, AG James over criminal...

The confirmed death toll rose to 79 on Friday after additional victims were recovered.
Read more

Olympics ‘A lot to lose’: SoftBank’s CEO speaks out...

In a series of tweets, SoftBank Group Corp's (9984.T) founder and CEO Masayoshi Son expressed bewilderment and concern about the Tokyo Olympics going ahead amid Japan's slow-going vaccination drive during the COVID-19 pandemic.
Read more

Ethereum is making big changes. Perhaps the most important is the jettisoning of the “miners” who track and validate transactions on the the world’s most-used blockchain network. Miners are the heart of a system known as proof of work. It was pioneered by Bit…
Read more

Happy Monday and welcome to Overnight Defense. I'm Rebecca Kheel, and here's your nightly guide to the latest developments at the Pentagon, on Capitol Hill and beyond. CLICK HERE to subscribe to the newsletter.THE TOPLINE: The Army is...
Read more

A 7-year-old migrant girl was abandoned by a smuggler on Tuesday at the border between the U.S. and Mexico in the latest instance of children being dropped off and abandoned at the border.
Read more

Biden remembers the late Senator John Warner at his...

President Biden and the late Senator John Warner served together for decades in the Senate.
Read more

A free speech advocacy group on Tuesday called on Rep. Thomas Massie (R-Ky.) to restore access to Twitter users whom he blocked from his official account amid a backlash to a controversial family photograph the...
Read more

The Centers for Disease Control and Prevention quietly removed language in its guidance for schools that suggested how administrators could choose to roll back COVID-19 protocols.
Read more

The Pentagon on Friday confirmed it mistook a civilian vehicle for an ISIS-K threat when it launched a drone strike on Aug. 29 in Kabul that killed 10 civilians."I am now convinced that as man...
Read more

Tim Tebow could end up making the Jacksonville Jaguars’ final roster before the start of the 2021 season, and there has been speculation he could be used in different packages like Taysom Hill is used for the New Orleans Saints.
Read more

The meeting comes after White House officials met with a bipartisan group of senators on Tuesday.
Read more

Kinzinger, Gaetz get in back-and-forth on Twitter over Cheney...

Reps. Adam Kinzinger (R-Ill.) and Matt Gaetz (R-Fla.) got into a back-and-forth on Twitter Tuesday evening ahead of the expected vote to oust Rep. Liz Cheney (R-Wyo.) from her perch in House GOP leadership.Gaetz re...
Read more

A teenager tells BBC News NI about the stress and relief of travelling abroad for spinal surgery.
Read more

Singapore will allow people arriving from Australia and Switzerland to enter without having to quarantine from Nov. 8, as the Southeast Asian nation takes another step in reopening borders and reviving its economy and status as an aviation hub.
Read more

A president engulfed by American missteps in a foreign war has to pivot as a major hurricane makes landfall in Louisiana. It’s 2005 all over again.
Read more

Parents Beth and Dan Wankiewicz are looking for answers over the death of their son Clay last year.
Read more

The Prince of Wales was asked about his father during a visit to Finsbury Park Mosque.
Read more

Hamas to be proscribed as terrorist group by UK

The change will cover the entirety of the Palestinian militant group, including its political wings.
Read more

Infowars host in custody to face charges in Jan....

Shroyer is charged with crimes including disorderly conduct and entering a restricted area of Capitol grounds.
Read more

The Capitol’s new Covid divide: Getting back to normal

‘There is no playbook for this’: Education secretary on...

CNN's Jake Tapper speaks to Education Secretary Miguel Cardona, who says his top priority is to open schools safely and quickly to provide relief to millions of families struggling under the weight of the coronavirus pandemic.
Read more

Federal Reserve officials signaled they are moving closer to the moment when they pare their massive support for the U.S. economy as the labor market and inflation strengthen, despite the emergence of the coronavirus’s delta variant.
Read more

Biden bars US investments in Chinese companies involved in...

Sanders: US must bring people together instead of ‘supplying...

Progressive Sen. Bernie Sanders (I-Vt.) on Sunday called for an "even-handed approach" to the conflict between Israel and the Palestinians and said the U.S. must lead the world in bringing people together instead of "supp...
Read more

The OnePlus Nord N20 5G is expected to launch in limited markets before the end of this year as an affordable mid-range Android smartphone.
Read more

Police in Ukraine have opened a murder inquiry into the death of Belarusian opposition activist Vitaly Shishov, after he was found hanged in a park in Kyiv. Bruises and scratches on his face may indicate that he was forced into a noose. Also in the programme…
Read more

The Supreme Court saved Obamacare, but its supporters shouldn’t...

Thursday’s ruling does nothing to protect against the other pending lawsuits challenging the ACA — and may even suggest they could have more traction with SCOTUS.
Read more

A Republican investment analyst who narrowly won a vacant state Senate district in the heart of Connecticut’s wealthy suburbs this week has some Democrats nervous about their party’s standing ahead of crucial off-year and midterm elections.
Read more

Nisra says the virus was mentioned on the death certificates of 48 people, up to Friday 1 October.
Read more

GM to Spend $1 Billion to Recall All Bolt...

General Motors Co. is recalling more than 73,000 of its Bolt electric vehicles at a cost of $1 billion due to the risk of their batteries catching fire.
Read more

In Venezuela's capital, Caracas, and other cities, it is challenging to find a bed at a public hospital because of a spike in coronavirus cases and chronic understaffing
Read more

A group of street dancers in Nairobi, Kenya, struggle against the odds to become celebrities.
Read more

Fauci warns of another COVID-19 surge, urges Trump to tell supporters to...