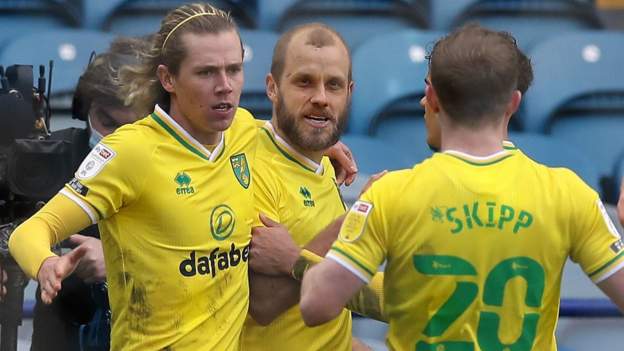 Norwich City came from a goal down to beat struggling Sheffield Wednesday and go 10 points clear at the top of the Championship.

Jordan Rhodes gave Wednesday a surprise early lead from six yards at Hillsborough after Barry Bannan’s free-kick was blocked by the wall and Joey Pelupessy’s follow-up strike was not properly cleared.

Teemu Pukki blasted Norwich level from eight yards after an hour as good build-up play set up the prolific Finn to strike into the top corner.

Todd Cantwell secured an eighth successive win for the Canaries 16 minutes later as he curled in a fine effort from inside the box.

Wednesday have now lost seven successive games and remain second-from-bottom of the Championship, seven points from safety with 11 games left to play. Colin Pitchfork should never have been released, says detective

Newcastle United LGBTQ+ fans group on post-takeover life: ‘Attacking us doesn’t get the results you want’

Ahmaud Arbery: ‘He was wonderful in every way’

Trump testing czar warns lockdowns may be on table...

Former President Trump’s coronavirus testing czar Brett Giroir warned Friday that lockdowns may be on the table again if more people don’t get vaccinated against the coronavirus. Giroir made the comments during a Fox News interview, after...
Read more

A routine door check turned to terror for Jesus Campos, who spoke out Wednesday the first time since the Las Vegas shooting. In an interview with Ellen DeGeneres, Campos -- the first person shot that night -- told his story. Jamie Yuccas reports.
Read more

The female deputies claim they were molested by their intoxicated male commanding officers during undercover operations.
Read more

Thailand preparing to limit exports of its COVID-19 vaccine

Even when you pay to get a decryption key, you may find your files are still locked up by another strain of malware.
Read more

Florida Rep. Stephanie Murphy will not challenge Rubio for...

“We’ve had too many close losses in Florida" Murphy says in a statement.
Read more

An intense manhunt continued across Miami on Memorial Day for three gunmen who opened fire outside a concert, killing two people and wounding more than 20 others. Manuel Bojorquez reports.
Read more

NBA’s Enes Kanter says he is ‘shocked and disgusted’...

Enes Kanter, a center for the NBA's Portland Trail Blazers, called for "normal gun control measures" after he said his brother was robbed in Atlanta over the weekend.
Read more

Covid vaccine mandates are on the rise. Will that...

Vaccination requirements may capture more people who haven't yet been inoculated. "Every little bit helps," a doctor said, but the true impact remains unclear.
Read more

The House is expected to vote Tuesday on a bill that will temporarily raise the debt ceiling by $480 billion through early December.
Read more

The organisation says peat bogs should be left alone as they trap carbon, helping to combat climate change.
Read more

Playbook PM: The world’s two most powerful Joes get...

HAPPENING SHORTLY: President JOE BIDEN speaking about the economy from the East Room. PIPELINE LATEST — AP/Washington: “Major U.S. pipeline company says it hopes to be largely back online by end of the week following cyberattack.” — “Thus far, Colonial has to…
Read more

If you need a new Apple laptop, it's a really good time to buy one. The latest MacBook Air and 13-inch MacBook Pro models use a proprietary chip designed by Apple — the M1— instead of the Intel processors the company has used for several years. In our testing…
Read more

How my kids feel about getting the Covid-19 vaccine

So much has been and will be said about vaccinating kids against Covid-19. Talking to my kids about getting vaccinated and allowing them to share their thoughts is also an important part of the process, writes Syra Madad.
Read more

The monthslong negotiations to resolve a dispute between Washington and Brussels over steel and aluminum tariffs came to an end this weekend.
Read more

Former President George W. Bush celebrated his 75th birthday on Tuesday by shooting a 74 in a game of golf.
Read more

Democrats urge federal agencies to address use of cryptocurrencies...

A group of Democrats on Friday urged the Biden administration to do more to confront the growing use of cryptocurrency markets in ransomware attacks, which have become an increasing national security threat over the past year. Sens. Ed Markey (...
Read more

Afghan man suing US, wants to reunite with sons

An Afghan man living in California is suing the U.S. to reunite with his sons who are still in Afghanistan after American forces withdrew in August.The International Refugee Assistance Project filed a ...
Read more

Failure by the Biden administration to adequately address the crisis at the U.S.-Mexico border could result in far greater numbers of people trying to enter the U.S., an anti-corruption activist in Guatemala is warning, according to a report.
Read more

As floodwaters persist in areas of northern and central Thailand and have started to hit low-lying areas in the capital, officials are looking warily ahead to developing storms later this month
Read more

World Series TV viewers for Braves-Astros up 37% for...

Leicester City manager Brendan Rodgers says he's "proud of his players" and singles out praise for 19-year-old goalscorer Luke Thomas after their 2-1 victory over Manchester United in the Premier League.
Read more

California man who allegedly shot and killed 6-year-old got...

Just days after Marcus Anthony Eriz allegedly shot and killed a 6-year-old boy in a road rage incident on a California freeway, he pulled a gun on a different driver during another altercation, a prosecutor said Wednesday in a court filing ahead of Friday's a…
Read more

Jaren Hall had 211 of his 312 yards passing in the first half, Jakob Robinson picked off two passes in the second half and No. 14 BYU beat Georgia Southern 34-17 on Saturday night.
Read more

The designer of ‘Everybody’s Gone to the Rapture’ has...

If you've had your fill of single player slogs — or tedious multiplayer modes that require you to grind for virtual riches that otherwise cost real money — then The Magnificent Trufflepigs should feel like a breath of fresh air. The new offering...
Read more

Osaka had previously announced she would not participate in media appearances at the tournament, citing a need to protect her mental health.
Read more

When Jon Gruden returned to the Raiders back in 2018 he was greeted with a pep rally news conference, owner Mark Davis calling it a “dream come true” and the “biggest day of his life.”
Read more

Weary Seafarers Come Ashore in the U.S. for J&J...

Ports around the U.S. are rolling out vaccines for seafarers, extending a lifeline to thousands of mostly foreign workers who’ve spent the pandemic isolated aboard ships ensuring goods kept trading across a battered global economy.
Read more

The 2022 Winter Olympic Games in Beijing are not yet upon us, but Team USA and Team Canada are already facing off for style points.
Read more

Vizio’s M-Series Quantum Is Our Favorite TV for Under...

Files on Gmail, Google Drive, and Google Photos add up fast. Here’s how to manage your space in the cloud.
Read more

The Pentagon's inspector general will review whether the department has plans to respond in the event the so-called "nuclear football," the briefcase that holds nuclear launch codes and other sensitive equipment, is compr...
Read more

All too aware of the pain of a penalty miss, England boss Gareth Southgate rallied around the trio who missed theirs in the Euro 2020 final.
Read more

NBA players are some of the most fashionable athletes in the world but Washington Wizards forward Kyle Kuzma may have taken it a little too far.
Read more

All 700,000 Defense Department civilians are required to be fully vaccinated against COVID-19 by Nov. 22, the Pentagon announced late Monday.The mandate - in line with the Biden administration's move last month to...
Read more

Pandemic sparks union activity where it was rare: Bookstores

The rise of labor action during the pandemic includes a business where unions once were rare: bookstores
Read more

A bipartisan group of Senate negotiators is trying to finalize their infrastructure proposal, amid stalemates on key provisions and pressure on Democrats to show progress on President Biden's top legislative priority....
Read more

Allan Saint-Maximin inspires Newcastle to a vital win at Burnley that lifts them six points clear of the relegation zone.
Read more

Japan's lack of a vaccination passport and limited testing capacity is threatening ambitions to reopen the economy at a crucial year-end period when restaurants earn up to a half of their annual revenue and travel agencies are at their busiest.
Read more

Social media users are joking about the Republican senator taking a vacation, following the backlash he faced for flying to Cancun during Texas' winter storm in February.
Read more

After a shooting at a restaurant left 9 dead and injured nearly two dozen others, authorities are on alert for more gun violence between biker gangs. A former biker gang embed talks about the attack and what authorities are doing to prevent another.
Read more

Securing BYOD in the post-pandemic world

With more personal devices in the office, how can companies ensure their networks stay secure?
Read more

Milwaukee Brewers reliever Josh Hader expects to be in a defined ninth-inning assignment in 2021.
Read more

Tory party co-chair Amanda Milling says she is “sorry” to anyone who has suffered discrimination in the party.
Read more

The Taliban inherited a vast American-made arsenal after retaking...

Pentagon officials have told ABC News they don't have a clear idea of just how much U.S.-made equipment is now in the hands of the Taliban.
Read more

The president of the Federal Reserve Bank of Minneapolis said on Sunday that it will "take a few years" before the U.S. can recover the 10 million jobs lost amid the pandemic.During an appearance on CB...
Read more

Fireworks to return to DC’s National Mall for July...

Fireworks are returning to the National Mall for the Fourth of July, in what organizers say will mark "an important step forward as the city emerges from the pandemic."The iconic July 4 light show in the nation's c...
Read more

Taryn Manning has nothing but fond memories of her time spent with her “8 Mile” co-star Brittany Murphy, who died in 2009.
Read more

And VP Kamala Harris plans a warning for the U.N.
Read more

"Because of the Delta variant, our schools are not safe and secure unless everyone wears a mask," said attorney Charles Dodson, a former judge.
Read more

Microsoft Edge is getting a major security upgrade, but...

Microsoft is adding support for Control-Flow Enforcement Technology in Edge to make its private browsing mode even safer.
Read more

‘Holyrood should be a mirror – it’s not’

The women of colour hoping to break the mould of the Scottish parliament's 22-year-history.
Read more

World number one Novak Djokovic said on Monday that he might consider skipping the Tokyo Olympics if the competitions are played without spectators.
Read more

The U.S. Department of Justice has slammed a new West Virginia law that bans transgender athletes from competing in female sports
Read more

Fauci warns of another COVID-19 surge, urges Trump to tell supporters to...