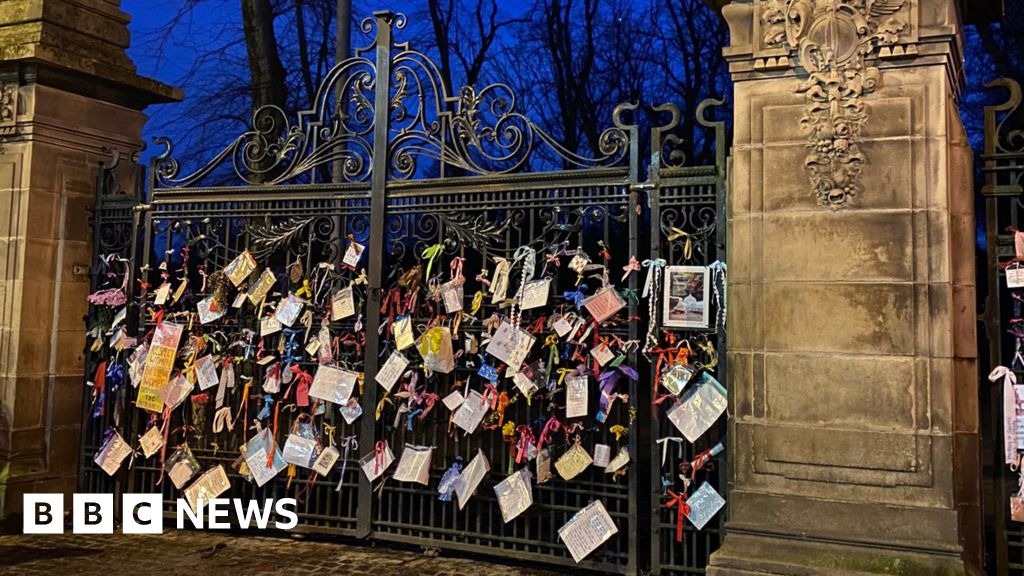 People in Scotland have paid tribute to Sarah Everard, lighting candles at home and tying ribbons to park fences.

After planned vigils by Reclaim These Streets were moved online, event organisers in Glasgow asked people to leave their tributes at locations around the city and go home safely.

A small number of people gathered to light candles at the Scottish Parliament in Edinburgh, but Police Scotland said they left shortly afterwards.

The Scottish government had warned that any vigil in a public place would go against coronavirus restrictions.

image captionRed ribbons were tied to the Mary Barbour statue in Govan. She was a key player in fighting rent increases imposed by Glasgow landlords during World War One.

image captionFirst Minister Nicola Sturgeon said she was “struck” by this tribute left in Glasgow’s Queen’s Park to Moira Jones, who was murdered in 2008. She also tweeted a picture of a candle lit to remember “Sarah, and all the others”

image captionCandles are lit outside the Scottish Parliament in Edinburgh, where a small number of people gathered.

image captionA poignant image from George Square in Glasgow, where floral tributes were left on benches

All images are subject to copyright BlackBerry 5G smartphone is still happening – and there...

A new post on OnwardMobility's website suggests the phone is coming at some stage soon.
Read more

Police remain outside The Clean Plate cafe in Gloucester and could be there "for a number of weeks".
Read more

Retailers say their supply chains have been severely impacted by the container logjam at UK ports.
Read more

Today on "Face the Nation," what will change the minds of the biggest holdouts when it comes to getting vaccinated?
Read more

With the darkest days of pandemic seemingly over, some of the largest publicly-traded businesses are growing more confident about spending the stockpiles of cash they stashed away during the height of the coronavirus lockdowns.
Read more

Britain's Adam Peaty completes the 'quadruple-quadruple' by claiming his fourth title of the week at his fourth consecutive European Championships.
Read more

Seven Hong Kong democracy campaigners, including former lawmakers, were sentenced on Saturday to up to 12 months in jail for their role in a protest last year against a sweeping national security law imposed by China.
Read more

Laura Ingraham blamed the left's anti-Americanism for "demoraliz[ing] young people and encourag[ing] millions of people to simply give up on America."
Read more

Hall of Fame quarterback Brett Favre has repaid the $600,000 that he owed to the state of Mississippi after he improperly received welfare money as part of an extensive fraud scheme, ...
Read more

A flood emergency order is in effect in Houston, as the city is expected to receive a year's worth of rain from Harvey, now downgraded to a tropical storm but bringing torrential rain for the next few days. Mark Strassmann reports.
Read more

Bloodstock's director tweeted she would be "binning" emails where people put their preferred pronouns.
Read more

As parts of western Washington began drying out after an atmospheric river dumped days of rain, waters in some areas continued rising, more people were urged to evacuate and crews worked to restore power and reopen roads
Read more

As US battles delta variant, tens of thousands of...

As COVID-19 cases continue to surge, tens of thousands of vaccines are set to expire in the coming weeks, with some states already reporting thousands of "wasted" doses.
Read more

A number of Twitter users and fellow news reporters across the country gave kudos to the reporter for such a unique segment.
Read more

The U.S. death toll from COVID-19 is approaching 600,000, with the virus taking advantage of inequalities across the country
Read more

Breaking Down The Bitcoin Drop (Podcast)

Myanmar’s junta has released more than 23,000 prisoners to mark the traditional new year holiday, including at least three political detainees, and the military leader behind the February coup confirmed he would attend a regional summit later this month
Read more

Germany on Tuesday lowered its coronavirus risk level from "very high" to "high" for the first time this year as the number of new infections continues to fall.The country's risk level had been "...
Read more

Eric Trump to speak at conference organized by leading...

Eric Trump will be a keynote speaker next month at a conference organized by a couple who have called the COVID-19 vaccine "abominable" and a "COVID kill shot," ...
Read more

Democrats plan to drop two policy priorities from President Biden's multi-trillion-dollar social spending package as negotiations continue ahead of a looming deadline to pass the legislation, said a lawmaker who spoke to NBC News on condition of anonymity on …
Read more

South Sudan: How to deliver Covid vaccines in a...

Delivering vaccines around South Sudan is more expensive than the cost of the jab itself.
Read more

Covid in Scotland: Raigmore Hospital at capacity amid rising...

Raigmore - the largest hospital in the Highlands - is at "code black status" due to pressure on staff and services.
Read more

US Open: Novak Djokovic going ‘back to basics’ against...

Novak Djokovic has "had enough of" talking about his bid for a calendar Grand Slam as he prepares to face Alexander Zverev in the US Open semi-finals.
Read more

Happy Friday and welcome to Overnight Defense. I'm Ellen Mitchell, and here's your nightly guide to the latest developments at the Pentagon, on Capitol Hill and beyond. ...
Read more

Pelosi vows to bring infrastructure to vote on Thursday

Speaker Nancy Pelosi (D-Calif.) told Democrats she will bring a Senate-passed bipartisan infrastructure bill to the floor later Thursday, rolling the dice with progressives who are vowing to vote down the roads-and-bridge...
Read more

Is this Nintendo Switch rival, the Ayn Odin, the...

The entire Portland police crowd control unit resigned from the assignment a day after a grand jury in Oregon indicted an officer for allegedly using unlawful force on a protester.
Read more

"The targets were selected because these facilities are utilized by Iran-backed militias that are engaged ... against U.S. personnel and facilities in Iraq," the Pentagon stated.
Read more

40 years before Surfside, a collapse in Kansas City...

CNN spoke with the first police officer to respond to the scene, the son and stepson of two victims killed, and an architect who has tried to prevent similar tragedies about the lessons learned that are still relevant now.
Read more

The multi-storey building was under construction before being reduced to a pile of rubble.
Read more

A Minnesota Merchant Marine has received a medal for his World War II heroism, decades after he helped achieve a masterful rescue under difficult circumstances.
Read more

Footage shows a building in flames and clouds of black smoke billowing into the air in the city of Tetovo.
Read more

Not everyone loves the streaming service’s coverage of the 2020 Games, but its highlight show is perfect just the way it is.
Read more

How to pick for a quality jogging stroller

Fetal tissue research has been used in the development of numerous vaccines and treatments, including for Parkinson’s, HIV and Covid-19.
Read more

Sir Alex Ferguson, Frank Lampard and Ally McCoist are among the big names from British football who attended a memorial in honour of former Rangers, Everton and Scotland manager Walter Smith.
Read more

The Biden administration is planning to aggressively expand offshore wind energy capacity in the United States, potentially holding as many as seven new offshore lease sales by 2025.
Read more

Organizers of a vigil to commemorate the crackdown on pro-democracy protests in China's Tiananmen Square said they had lost an appeal to hold a rally.
Read more

Sandra Garza also revealed that she and the Capitol Police officer had previously been Trump supporters, in an opinion piece for CNN.
Read more

New Zealand weightlifter Laurel Hubbard is set to become the first transgender athlete to compete in the Olympic Games, after she was selected for the national team on Monday.
Read more

A 1,098 carat diamond believed to be the third largest gem-quality stone ever to be mined has been discovered in Botswana.
Read more

A school year lost, and a solution found

One of the great lessons of the pandemic is this: American education does not work as it should.
Read more

Mohammed Al-Araimi was stabbed to death while out with a friend in Knightsbridge.
Read more

“I’m not disappearing. I have a voice, I have a perspective and that’s not gonna change,” Cuomo said.
Read more

Oregon settles with Hispanic business owner who sued over...

The state of Oregon has agreed to settle a lawsuit from a Hispanic business owner who sued over being barred from a COVID-19 relief program exclusively for Black business owners.
Read more

Facebook announced former President Trump will be suspended from the social media platform for two years, after finding that his posts on January 6 stoked violence and posed a risk to public safety. Nancy Cordes has the details.
Read more

Families are starting to move into what is being called America's first solar-powered town. Babcock Ranch, about half an hour northeast of Fort Myers, Florida, is supposed to produce more energy than it consumes once it's finished. Developers are building nea…
Read more

Brave is taking the video conferencing fight to Zoom

Brave has added video calls to its browser to provide users with a privacy-focused video conferencing alternative.
Read more

As the Belarus crisis deepens, volunteers have been offering aid in Poland's forbidden forests.
Read more

Blue Origin, the aerospace company founded by Jeff Bezos, has allegedly fostered a toxic and sexist workplace culture that subjected employees to harassment, according to an essay published Thursday by a group of former a...
Read more

What Does The Crystal Ball Hold For Virginia?

On the latest episode of Hemmer Time, Bill sits down with Managing Editor of Sabato’s Crystal Ball, Kyle Kondik, to talk about their predictions for the 2021 Virginia gubernatorial election on November 2nd.
Read more

U.S. and Canadian officials are set to meet Tuesday to discuss how to eventually lift pandemic-related border restrictions between the two countries, but no immediate action is expected, sources briefed on the matter told Reuters on Monday.
Read more

The Political Economy of Dystopia

The laptop class looks with bewilderment and contempt at two classes it sees as vestigial: small property holders and tangible workers. The post The Political Economy of Dystopia appeared first on The American Conservative.
Read more

The cryptocurrency that started as a joke has shot up in price thanks to memes, hope for a big score, and not much else
Read more

Juan Williams, liberal co-host of Fox News' "The Five," announced on Wednesday that he is leaving the show. Williams, who is also a columnist for The H...
Read more

Voters in Virginia Beach have approved a huge bond measure for a mid-sized city, committing to spend millions in hopes of avoiding billions in losses due to rising seas and intensifying hurricanes
Read more

HSBC (HSBA.L) said on Sunday it is committing $5 billion in lending to "strong" companies in the United Arab Emirates to help drive the Gulf country's growth plans.
Read more

Vestas Shuts Down Some IT Systems After Cyber Security...

Vestas Wind Systems A/S, the worlds largest wind turbine maker, said it has shut down some IT systems across multiple business units and...
Read more