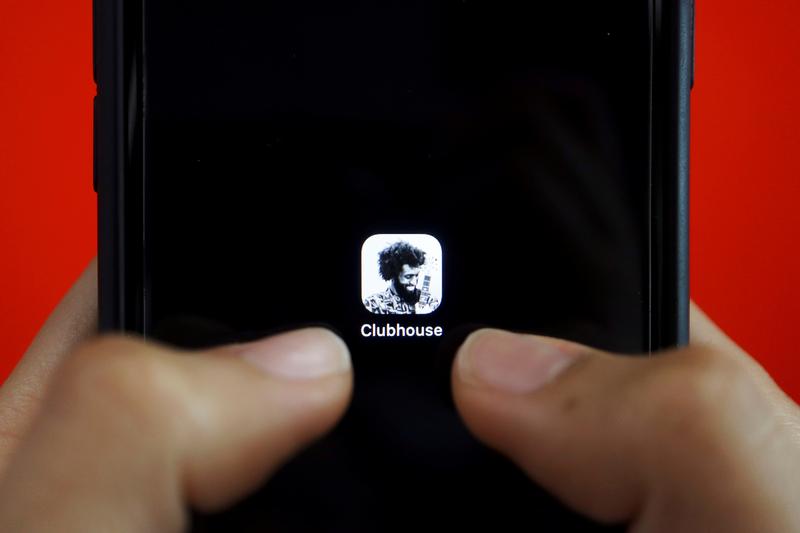 DUBAI (Reuters) – Oman blocked U.S. audio app Clubhouse on Sunday because it did not have the right permit, authorities said, but some activists described the move as a further erosion of freedom of expression in the Gulf state.

The government did not respond immediately to a request for comment, but the telecoms regulator told WAF news website that the application was blocked due to a lack of proper authorisation.

Similar communication applications must obtain a permit from the authority, the Omani Telecommunications Regulatory Authority said.

Oman_blocks_Clubhouse was trending on social media in Oman on Sunday. Many Omanis shared screenshots of the app showing error message.

The government of Oman takes the authoritarian government of China as a role model and bans … Clubhouse which has been used by Omanis as a space to express their opinions freely without government censorship, the Omani Association For Human Rights said in a statement.

Access to Clubhouse was blocked in China last month.

The app has been popular in Arab countries where media is directly controlled by governments and commentators run the risk of being imprisoned for critical opinions.

Clubhouse has faced criticism elsewhere over reports of misogyny, anti-Semitism and COVID-19 misinformation on the platform despite rules against racism, hate speech, abuse and false information.

The app has said it is investing in tools to detect and prevent abuse as well as features for users, who can set rules for their rooms, to moderate conversations.

I hope that the suspension of the Clubhouse app in Oman is a result of technical issues and not a formal ban, tweeted Omani writer Zakaria al-Muharrmi.

Preventing people from speaking and listening to others does not protect societies, but rather increases tensions and pushes them into the abyss of chaos and confrontation. N.Y. to Offer Boosters at Nursing Homes After State of Emergency

Rough sleepers in England to get £203m funding to...

But the number of people helped by the funding "will only scratch the surface", charity Crisis warns.
Read more

Florida Lieutenant Governor Jeanette Nuñez joins “CBS This Morning” to discuss the latest developments on the deadly high-rise building collapse near Miami, and the investigation into what caused it.
Read more

What are vaccine ‘passports’ and why are they controversial?

Shang-Chi and the Legend of the Ten Rings has landed in theaters – here’s what the movie’s ending means for the MCU.
Read more

Allyson Felix said surpassing Carl Lewis as the most decorated U.S. track and field athlete was "never a goal" but that it was "amazing" to have achieved the feat after winning her 11th Olympic medal at the Tokyo Games.
Read more

The concept of a dimension seems simple enough, but mathematicians struggled for centuries to precisely define and understand it.
Read more

How to Save Money on Your Digital Subscriptions

You don't have to be tied down to multiple costly services month after month.
Read more

Nigerian president calls on US to relocate Africa Command...

Nigeria on Tuesday urged the United States to move the headquarters of U.S. Africa Command (Africom) from Germany to the African continent to provide more direct responses to ongoing violence and insurg...
Read more

As Darren Campbell emerged as a talented teenage sprinter, he was leading a double life as a gang member. A twist of fate broke him free.
Read more

Congressman calls for Governor of Texas ‘to start disregarding this president’

British and Irish Lions: Kyle Sinckler can play in...

A citing against British and Irish Lions prop Kyle Sinckler for an alleged bite in the second Test against South Africa has been dismissed.
Read more

New Zealand Prime Minister Jacinda Ardern extended a lockdown in Auckland and pushed back plans to reopen schools in the nation’s largest city as its coronavirus outbreak continues to spread.
Read more

The Senate Judiciary Committee approved the nomination of Neil Gorsuch to the Supreme Court in a party-line vote, setting up a Democratic filibuster to block a vote by the full Senate. As Jan Crawford reports, the GOP majority is planning to exercise the so-c…
Read more

Best tool to rein in Big Tech is a...

A whistleblower’s claim that Facebook (FB.O) chased profit rather than rein in hate speech leaves two questions for policymakers to answer: Do the social network’s actions merit a regulatory…
Read more

It comes as Chinese firms face scrutiny by Western nations and as Beijing cracks down on data privacy.
Read more

Dems to White House: The only prescription is more...

The president has been more a facilitator than manager of the legislative process. His party wants more of the latter.
Read more

Europa League: What can Rangers expect from Slavia Prague?

McAuliffe took $100K from billionaire with ties to Harvey...

Former Virginia Gov. Terry McAuliffe took a six-figure donation from Paul Tudor Jones, a billionaire hedge fund owner who was a close ally of Harvey Weinstein's and a board member of the Hollywood convicted rapist’s production company.
Read more

Three separate wildfires spread through the Black Hills in South Dakota this week, leading to the closure of Mount Rushmore and the evacuation of hundreds of homes on Monday.  One of the fires, a...
Read more

US media’s inaccurate reporting on Rittenhouse had real consequences...

After riding the initial wave of the digital-currency revolution half a decade ago, Estonia is cracking down on the ballooning industry in a cautionary tale for would-be crypto hubs.
Read more

NASCAR is developing the temporary quarter-mile track it will build in the L.A. Coliseum for next February's Clash race on the iRacing platform.
Read more

Matt Chapman and Ramon Laureano hit two-run home runs in the first two innings and Cole Irvin earned his second straight win as the Oakland A’s capitalized early on Texas’ unorthodox sequence of pitchers, racing to an early nine-run lead on the way to a 13-6 …
Read more

Because the West Virginia senator is Democrats’ 50th vote, they may have no choice but to listen to him.
Read more

Sen. Chris Murphy (D-Conn.) on Sunday said he thinks Congress has an opportunity to pass a gun reform bill, citing Republican senators who are interested in compromising on legislation in the days ...
Read more

This month, President Biden will convene 40 world leaders to discuss the urgency of climate action and strengthen global cooperation on key climate goals. But before the president takes the global stage at the Leaders Sum...
Read more

“We call on the DPRK to cease these provocations and other destabilizing activities, and instead, engage in dialogue,” Sung Kim said.
Read more

The cost faced by taxpayers in Arizona's most populous county to reform the sheriff's department will have reached at least $202 million by the end of next year, according to an analysis published Monday by ...
Read more

The warning - meaning damage and travel disruption may be expected - comes in on Friday afternoon.
Read more

No one all year has figured out how to beat Novak Djokovic in a Grand Slam match. Now it’s Jenson Brooksby’s turn to try — and the way he, and his coach since age 7, went about things ahead of time were as original as the 20-year-old Californian’s playing sty…
Read more

A Pfizer and BioNTech study to determine how the COVID-19 vaccine affects pregnant women has been delayed due to slow enrollment and new vaccination guidelines."We have stopped enrollment in U.S. because of recomme...
Read more

Instagram Lite reboot squeezes the app into a 2MB...

Facebook is today relaunching Instagram Lite, a stripped-down version of the image-sharing app designed for users in emerging markets. Developed by Facebook’s team in Tel Aviv, the birthplace of Facebook Lite and Messenger Lite, the app’s package size is just…
Read more

Young And Pregnant Sneak Peek: Kiaya Gets An Update...

Kiaya gets an update from X’Zayveon about his release from prison in this week's 'Teen Mom: Young and Pregnant' episode.
Read more

Scientists in the U.S. have successfully repaired a faulty gene in human embryos for the first time. Researchers used the powerful technology known as CRISPR to fix the DNA mutation that causes an inherited form of heart disease. Seventy-two percent of the re…
Read more

Valencia walk off the pitch during their La Liga game at Cadiz in response to an alleged racist comment towards Mouctar Diakhaby.
Read more

The last confirmed sighting of the man named as a person of intertest in the Gabby Petito investigation was on September 14.
Read more

Twitter says it is deactivating an automatic photo-cropping function after an investigation into claims the tool trended toward removing Black faces from photographs.Twitter's director of software engineering Rumma...
Read more

AP torched for claiming they were unaware of Hamas...

The Associated Press came under fire Saturday for claiming to be unaware that they were sharing office space with Hamas militants in Gaza, dismissing the Israeli government's claim that the terror group was operating inside the media building that was destroy…
Read more

Red Sox fan comes up with flying bat while...

A fan at Fenway Park watching the Boston Red Sox take on the Los Angeles Angels got a little more than he bargained for Sunday afternoon while sitting in his seat.
Read more

At the height of Queen Victoria’s reign in 1886, two entrepreneurs started taking commission on English horse races and founded Ladbrokes. They were followed in 1934 by bookmaker William Hill.
Read more

A volcano erupted on the Spanish Canary Island of La Palma on Sunday, sending jets of lava and a plume of smoke and ash into the air from the Cumbre Vieja national park in the south of the island. Read more her…
Read more

“You’ve Reached Sam” by Dustin Thao follows high school senior Julie as she deals with the death of her boyfriend, Sam
Read more

A vast majority of voters say more police are needed on the street amid concerns over a rise in violent crime across the country, according to a new Harvard CAPS-Harris Poll survey.Seventy-five percent of voters sa...
Read more

FAA allows use of drone to help search for...

‘The Lord of the Rings’ director sells most of...

"The Lord of the Rings" director Peter Jackson is selling most of his visual effects studio Weta Digital to Unity, which makes development software for video games, for $1.6 billion.
Read more

A mother’s journey through her child’s deafness

Science writer Lydia Denworth's son was diagnosed with moderate to profound hearing loss around 2 years old. She explores hearing, language and the brain in her new book, "I Can Hear You Whisper: An Intimate Journey through the Science of Sound and Language."…
Read more

Headphones deal: save £110 on these excellent noise-cancelling cans

You can save big on these stellar noise-cancelling headphones from Jabra in Amazon's Spring Sale.
Read more

The U.S. Department of Education will revamp a program that provides loan forgiveness to government and nonprofit workers, the agency announced Wednesday.
Read more

The fast-moving Alisal Fire is threatening dozens of homes in Santa Barbara, California, and shut down a portion of Highway 101. Jamie Yuccas shares the latest.
Read more

It might have once been thought impossible, but times are changing. Three players share their stories of matching maternity with cricket.
Read more

Sequoia Leads $39 Million Round to Back Chile Asset...

Text messages allegedly sent by Karol Chwiesiuk show him bragging about having "knocked out a commie" and telling a friend: "N****, Don't snitch."
Read more

Prosecutors: New trial not merited for ex-cop in Floyd...