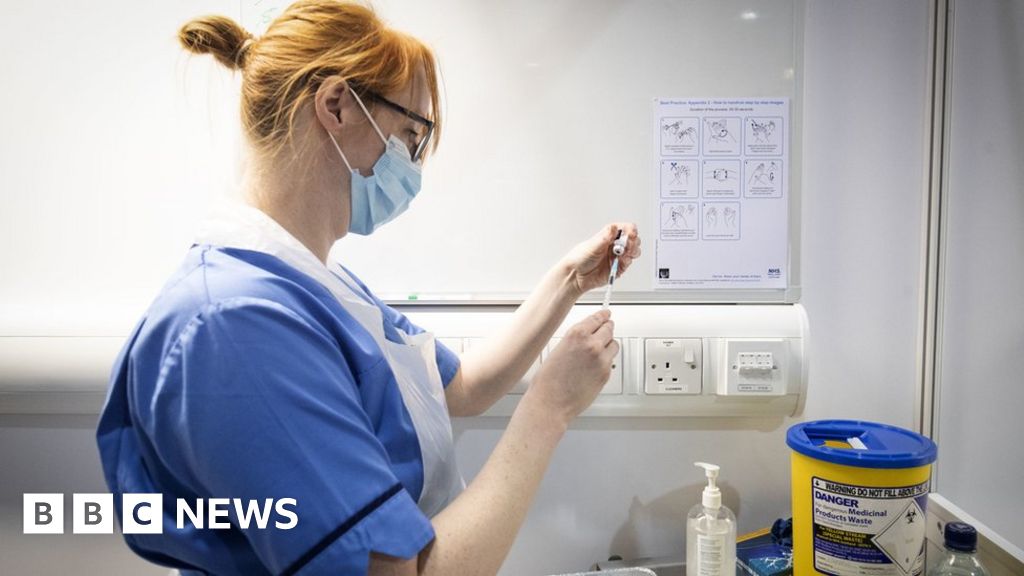 Millions of vulnerable people with underlying health conditions, such as cancer, diabetes and heart disease, are being urged to book their Covid jabs.

Charities including Cancer Research UK, Mencap and the Terrence Higgins Trust have written an open letter to those in priority group six.

They are trying to reassure people that vaccines are safe and effective.

The Department of Health said more than half of the seven million people in that group have had their first dose.

Priority group six includes those aged 16 to 64 with an underlying health condition, their carers, and people with learning disabilities.

People with sickle cell disease, lupus and those on a GP learning disability register, as well as people who have vascular disease or have had a stroke are also included in group six.

Those with learning difficulties have been found to be up to six times more likely to die from Covid-19.

The NHS will send about two million text messages in England over the weekend asking those in group six to book an appointment at a vaccination centre or pharmacy.

The 18 charities said in the letter: “The good news is, even if you have not received your letter yet, you can now get an appointment at a vaccination centre or community pharmacy, quickly and easily, by using the national booking system or calling 119 in England.”

The charities, which also includes the African Caribbean Leukaemia Trust, Carers UK and Diabetes UK, urged anyone with concerns to discuss them over the phone when booking or with a health professional at their appointment.

The backing of the charities was “invaluable”, Health Secretary Matt Hancock said.

Vaccines minister Nadhim Zahawi said the campaign should help “reassure” those with any concerns about the vaccine.

According to latest government figures, more than 23.6 million people have received their first dose of a coronavirus vaccine in the UK. Save on holiday gifts from Amazon, It Cosmetics and more
Read more

Labour shortage: Is Santa Claus coming to town this...

With less Santas donning their suits and more demand for holiday cheer, Santa will be in short supply.
Read more

A total of 58,000 people were unemployed, with the rate in Wales lower than the UK average of 4.3%.
Read more

Looking ahead on Child Tax Credit

What does English votes for English laws mean?

The government wants to scrap "English votes for English laws" - we explain what the procedure means.
Read more

Asian stock markets have declined for a second day after gains for U.S. tech stocks pushed Wall Street to a new high and the World Bank raised its forecast for China's economic growth
Read more

In Praise of the Agnostic

There really is a virtue in knowing what you don’t know. That applies to the experts, too. The post In Praise of the Agnostic appeared first on The American Conservative.
Read more

Tens of thousands of people, including far-right activists and members of France's yellow vest movement, protested Saturday across the country against a bill requiring everyone to have a special virus pass to enter restaurants and mandating COVID-19 vaccinati…
Read more

The toll is three times the number of people killed in traffic accidents around the globe every year.
Read more

Bloomberg Westminster: ‘Up to Their Eyeballs’

UK is not a corrupt country, says Boris Johnson

Florida ‘Teacher of the Year’ charged with child abuse...

A “Teacher of the Year” in Florida was arrested Friday after she allegedly struck a minor in the face--causing a nose bleed--after the student posted a message on Instagram questioning the educator's selection for the top honor, according to a report.
Read more

What blue wave? A close look at Texas today...

The left's generational bid to win America through ethnic change is over, even if they don't know it. It culminated in something so shocking they still haven't quite realized or accepted it.
Read more

Harrison, an American, holds the 100-meter world record but came in second in Tokyo to Camancho-Quinn, who was representing Puerto Rico.
Read more

Presented by Uber Driver Stories GOOD MORNING, MASSACHUSETTS. May the fourth be with you. TO MANDATE OR NOT TO MANDATE A debate is brewing over...
Read more

Protesters on opposing sides of a trans rights dispute at a Korean spa in Los Angeles clashed Saturday, and at least one person was injured.
Read more

A restrictive Florida election law signed by Governor Ron DeSantis has left groups scrambling to re-educate voters on what the changes mean, and calls for Democratic donors to step in and help with growing costs.
Read more

Tempers flare in Colorado House after member calls another...

A Colorado state lawmaker sparked uproar in the legislature this week after calling one of his colleagues "Buckwheat" during a House session.Rep. Richard Holtorf (R) was talking about about milit...
Read more

Kurz to quit as Austrian chancellor amid corruption probe

The deal, if green-lighted by Education Department officials, would represent one of the most dramatic shakeups of how the federal government collects student loans in recent years.
Read more

The former Olympic gymnast settled with USA Gymnastics in December of 2016 for $1.25 million to resolve claims that she was sexually abused by Nassar for seven years.
Read more

China-Taliban ties warming ahead of US withdrawal

China's foreign minister has met with a delegation of high-level Taliban officials as ties between them warm ahead of the U.S. pullout from Afghanistan
Read more

Ida Makes Landfall in Louisiana With Winds Stronger Than...

Envoy: US ready to confront attempts to tear Bosnia...

A senior U.S. official says Washington remains committed to maintaining peace and stability in Bosnia despite recent challenges by some of its Serb nationalist leaders to the U.S.-brokered Dayton peace agreement
Read more

Indonesian musicians Rich Brian and NIKI take the WIRED Autocomplete Interview and answer the internet's most searched questions about themselves. Does Rich Brian actually ice skate? Does he have tattoos? Where is NIKI from? Where does she shop? Where did she…
Read more

Nintendo Switch Online app will lose one of its...

Nintendo has announced that the Nintendo Switch Online app is losing some of its functionality, despite barely having any to begin with.
Read more

2 storms bring snow and tornadoes to the Rockies,...

Job Growth Picks Up in Sign of Progress (Podcast)

Number of people with dementia to rise 40 percent...

The number of people living with dementia worldwide is expected to increase by upward of 40 percent over the next several years, according to new data from the World Health Organization (WHO).The number of dementia...
Read more

The hospitality industry's warning came after Nicola Sturgeon said a move to level zero was likely to be delayed.
Read more

DuckDuckGo is certainly worth checking out if you're looking for a privacy-focused search engine that also prevents online tracking.
Read more

The son of a Boston police captain was arrested and charged with plotting to attack and bomb a college campus; There's criticism clouding the upcoming release of Harper Lee's second novel, "Go Set A Watchman".
Read more

NBA: LA Lakers fall to fifth defeat of the...

The Los Angeles Lakers suffer a fifth defeat of the season as they struggle without LeBron James and Anthony Davis.
Read more

Azeem Rafiq says he is "incredibly disappointed" that England captain Joe Root said he could not recall ever witnessing racism at Yorkshire.
Read more

Harrogate Town's next three fixtures are postponed after positive Covid-19 cases were identified in the club's squad.
Read more

Bristol-Myers Is Said to Have Weighed Offer for Acceleron

Acceleron Pharma Inc. engaged with several companies including Bristol-Myers Squibb Co. to gauge their interest in a potential acquisition before Merck & Co. agreed to buy the company for $11.5 billion in the biggest biotechnology deal of 2021, according to a…
Read more

Fourth seed Alexander Zverev advances to the US Open quarter-finals with a straight-set victory over Jannik Sinner.
Read more

A 3-year-old pianist is going to make her Carnegie Hall debut in the fall of 2021.
Read more

Lawmakers race the clock to avert shutdown ahead of...

Government funding expires at midnight and Congress has not yet passed a stopgap funding bill to avert a shutdown, though Democratic leaders are on track to do so later Thursday.
Read more

Chris Diamantopoulos builds a hot career, on screen and...

If you get a sense of déjà vu when you see actor Chris Diamantopoulos on screen, but can't place his name, he's OK with that
Read more

Two men accused of insider trading told European Union judges that investigators shouldn’t have intruded into their privacy in the same way they’re allowed to in terrorist or spying probes.
Read more

In the two years since Lucy Dacus was last on “Saturday Sessions,” she has released two acclaimed albums, built a devoted following, and even formed an indie supergroup. Her third and latest album, "Home Video," was released yesterday. From Richmond, Virginia…
Read more

Kuwait hasn’t approved a new term for the board of its $600 billion sovereign wealth fund since its tenure expired two months ago, according to two people familiar with the matter.
Read more

Belgium braces for another surge in COVID-19 cases

The Messenger RNA Pioneers Everyone Ignored

Here is the latest news from the pandemic.
Read more

James Beeks, who the federal government says is a successful Michael Jackson impersonator, has been charged in connection with the Jan. 6 riot.
Read more

Obama says US ‘desperately needs’ Biden legislation ahead of...

Former President Barack Obama on Monday urged support for President Biden's economic agenda at the outset of a pivotal week in Congress for key legislation, batting down arguments over the price tag or means of paying for...
Read more

HIGHLIGHTS: Long Three by Josh Richardson in the 3rd Quarter