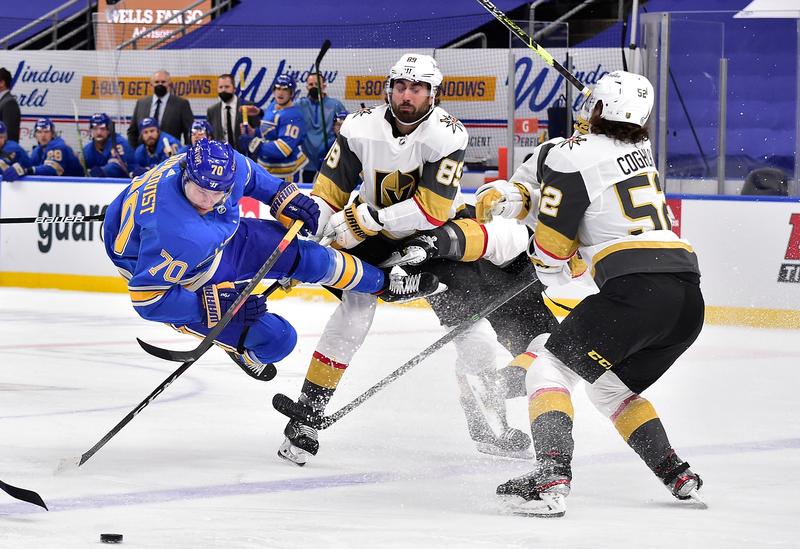 Marc-Andre Fleury made 33 saves to earn the victory in his 15th start since Feb. 5. Alex Tuch also scored for the West Division-leading Golden Knights, who have won eight of their last 10 games.

Sammy Blais scored and Ville Husso made 21 saves for the Blues, who saw their seven-game point streak (4-0-3) snapped.

The Blues are just 4-6-4 at home this season. They have won just one game at Enterprise Center since Feb. 2.

The Golden Knights scored 4:01 into the game by capitalizing on their forecheck. Jonathan Marchessault threw a backhand pass from the right boards to Theodore, who stepped in from the blue line to score from the slot.

That was Theodores first goal in 17 games.

At the end of the scoreless second period, the Blues nearly broke through on a late power play. But Fleury denied Ryan OReilly from point-blank range to keep the Golden Knights ahead 1-0.

Stone doubled that lead to 2-0 just 1:32 into the third period. Theodore kept the puck in the offensive zone at the right point and fed Stone on the left side. Pacioretty took a cross-ice pass from Stone and fired a shot on goal from the right circle. Husso made the save, but the puck rebounded into the left circle and Stone scored into the open net.

Blais scored just over three minutes later to cut the lead in half. Vladimir Tarasenko found him unattended at the right post with a centering pass from behind the net.

But Pacioretty put the Golden Knights up 3-1 with a blast off his rush up the left wing. Stone iced the game with his backhand wraparound goal with 7:51 left to play.

Tuch scored an empty-net goal with Husso pulled for an extra attacker.

This was the Blues first regulation time loss in 12 games in their all-time series against the Golden Knights. Match of the Day 2 analysis: How ‘amazing’ Jamie Vardy keeps scoring goals for Leicester at 34

Members of Scotland's largest health workers union accept the deal to give most NHS staff a 4% pay rise.
Read more

This year’s Cannes Palme d’Or winner, “Titane,” directed by Julia Ducournau, has stunned its way into becoming one of the year’s most notable films.
Read more

Guatemala disappeared: Reuniting families with the remains of loved...

Thousands are still searching for their loved ones 25 years after Guatemala's armed conflict ended.
Read more

Fifteen years after five women were killed in Ipswich, prostitution returns to streets in the town.
Read more

Review: ‘Survive the Night’ is a fast-paced, twisty thriller

In “Survive the Night,” a depressed college student whose best friend has been killed by a serial killer accepts a ride home from a stranger
Read more

A Montana Army National Guard soldier last week became the first woman ever to complete the Army's grueling, seven-week sniper course.The infantry soldier, which the Army did not identify by name, graduated on Nov....
Read more

MLB brings baseball to Iowa’s “field of dreams” for...

From the big screen to the big leagues, the first major league baseball game is played in Iowa right next to the "field of dreams" ballpark. A special temporary stadium was built for some 8,000 lucky fans. Mola Lenghi has the details.
Read more

Army of the Dead on Netflix is Zack Snyder’s...

Austria Speeds Up Vaccine Program With No Spending Cap:...

Just a few months ago, California was the epicenter of the coronavirus pandemic in the U.S.
Read more

Mesa (MESA) Wants to Be First Airline to Tackle...

I stopped drinking – then baking business turned my...

Lesley Smith gave up alcohol for the sake of her children but had "no outlet" until she found a passion for making cakes.
Read more

Covid-19: All countries taken off travel red list and...

An event 50 years in the making is now only 50 days away! That’s right, “The World’s Most Magical Celebration” begins on Oct. 1, honoring the 50th anniversary of Walt Disney World Resort.
Read more

Two men attempted to steal a prized Claude Monet painting from a museum in the Netherlands, though the robbery was foiled and the suspects fled empty-handed, according to Dutch police.
Read more

Finally, a new Apple TV iteration is here, with the Apple TV 4K 2021 arriving in late May of this year. Aside from the remote, though, what else is there to shout about?
Read more

House Republicans' removal this week of Rep. Liz Cheney (R-Wyo.) as their conference chair and an updated Centers for Disease Control and Prevention (CDC) guidance on vaccinated individuals are expected to dominate ...
Read more

Singer Luke Combs pays for funerals of 3 who...

David Braben, BAFTA fellow and head of Frontier Developments, chats to us about the past, present and future of titles set in the outer cosmos.
Read more

AMD has overtaken Intel in Puget System builds, despite the processors being initially dropped in 2015.
Read more

Britain's Dan Evans is outclassed by second seed Daniil Medvedev as the Russian reaches the US Open quarter-finals in style.
Read more

The morning after Diwali, the Hindu festival of lights, residents of New Delhi woke up under a blanket of toxic smog and breathed in the most dangerously polluted air of the year so far, after revellers, as usual, defied a fireworks ban.
Read more

Be ready to start your Zero Trust strategy with these expert tips.
Read more

Brazil regulator to probe hospital chain over use of...

The Brazilian agency that regulates health insurance plans has opened an investigation into allegations that a hospital chain tested unproven drugs on elderly COVID-19 patients without their knowledge, the regulator's director told a Senate inquiry on Wednes…
Read more

The sea turtle washed ashore a riverbank in Massachusetts this week.
Read more

WATCH: Firefighters race to save homes from wildfire in...

Firefighters used aircraft to dump water on a blaze that is threatening residential areas in Turkey.
Read more

For Valorant’s one-year anniversary, Riot Games has announced that a mobile version of the game is in development, but there’s no release date yet.
Read more

After death of Covid-denying president, Tanzania sets roadmap to...

Tanzania's coronavirus response is getting serious, two months after the death of the country's Covid-denying president.
Read more

Police in Dubai have arrested a group of people on charges of public debauchery, over a widely shared video that showed naked women posing on a balcony in the city
Read more

Singer-songwriter Arlo Parks was born in Paris and raised in London. She was discovered after uploading demos online and later released a single that scored 3 million streams on Spotify. This year has been a big one for Parks: She won the Brit Award for Break…
Read more

Biden in NYC: Infrastructure plan needed to deal with...

The president visited neighborhoods in New York and New Jersey damaged by the remnants of Hurricane Ida.
Read more

The focus on the pilots of Malaysia Airlines Flight 370 is raising questions about the screening process for pilots. Jeff Pegues reports on the rigorous screening process airline pilots face in the U.S.
Read more

Watch the best shots as Great Britain's Andy Murray and Joe Salisbury secure victory over Germany's Kevin Krawietz and Tim Puetz to book their place in the quarter-finals.
Read more

"Get vaccinated. Then get a glass of wine with your friends," said the ex-Secretary of State.
Read more

The Food and Drug Administration (FDA) adjusted Moderna's emergency use authorization on Thursday to permit more COVID-19 vaccine doses in each vial - a move expected to speed up deliveries and shipments. ...
Read more

A Downing Street spokesman says the PM apologised but some families reject his remarks.
Read more

The country's vaccination rollout is one of the fastest in the world, so why are Covid cases surging?
Read more

Capitol Police in the coming days will begin scaling back and removing parts of the perimeter fencing erected outside the Capitol after the deadly Jan. 6 insurrection.In a memo to lawmakers and staff on Monday, Act...
Read more

President Biden has nominated the China-linked president of the University of Pennsylvania to be the next U.S. ambassador to Germany.
Read more

Liverpool manager Jurgen Klopp speaks on his delight at his side securing Champions League football on the final day of the Premier League season with a win against Crystal Palace.
Read more

Mr. Obama said for the nation to progress, Black Americans "cannot let up during these next four" years.
Read more

Britain says it will make it easier for Afghans who worked with British troops to settle in the U.K., amid rising fears for their safety as foreign forces leave Afghanistan
Read more

A Michigan State Police K9 dog was killed in the early morning hours on Sunday, when a suspected drunk driver hit the patrol vehicle he was stationed in.
Read more

Virginia's Democratic gubernatorial nominee Terry McAuliffe could face backlash from Virginians at the polls after a prosecutor he endorsed agreed to cut almost in half the prison sentence for a convicted sex predator.
Read more

Gov. Andrew Cuomo says workers in New York City’s airports and public transit system will have to get vaccinations or face weekly testing for the coronavirus, but he stopped short of mandating either masks or inoculations for the general public
Read more

U.K. Truck Company That Works for BP Could Face...

Follow us at @BloombergUK for the latest news and analysis. Some drivers at the U.K. company that handles fuels deliveries for BP Plc will...
Read more

U.S. troops completed their withdrawal from Afghanistan even though a small number of Americans and thousands of Afghan allies were unable to evacuate in time. Stateside, the White House pledged support to states hit by Hurricane Ida. CBS News congressional c…
Read more

Spain, in bid to rally economy, wants tourists within...

Nicaragua's President Daniel Ortega on Wednesday said sanctions would not deter his government and he vowed not to free detained political foes accused of crimes, as international pressure mounted to end a crackdown ahead of a November election.
Read more

A bidding war is breaking out for Kansas City Southern, with Canadian National Railway making a $33.7 billion cash-and-stock offer for the railway
Read more

Senate Republicans charge Schumer’s been ‘silenced’ on Israel due...

The Senate GOP reelection arm is taking aim at Senate Majority Leader Chuck Schumer over his relative silence the past couple of days regarding the fierce fighting between Israel and Hamas.
Read more

85% of flight attendants have dealt with an unruly...

A new survey found that 85% of flight attendants have dealt with an unruly passenger in 2021.
Read more

At least 12 dead as tornadoes rip through two...

Lindsey Graham Says ‘We Shot Ourselves in the Foot’...

The South Carolina senator was reacting to the Senate's vote to temporarily extend the debt limit after 11 Republicans broke rank to overcome a filibuster.
Read more

Petitioners complained he's previously supported Planned Parenthood, saying "his beliefs and core values do not align with those" of the school.
Read more

WhatsApp users can now migrate chats from iOS to...

Citadel to Redeem About $500 Million From Melvin Capital:...

Ken Griffins Citadel LLC and Citadel partners are seeking to redeem around $500 million of the $2 billion they put into Melvin Capital...
Read more

Twitter's timeline algorithm tends to amplify right-leaning politicians and news outlets more than their counterparts on the left, a study conducted by the platform found.The company analyzed mi...
Read more