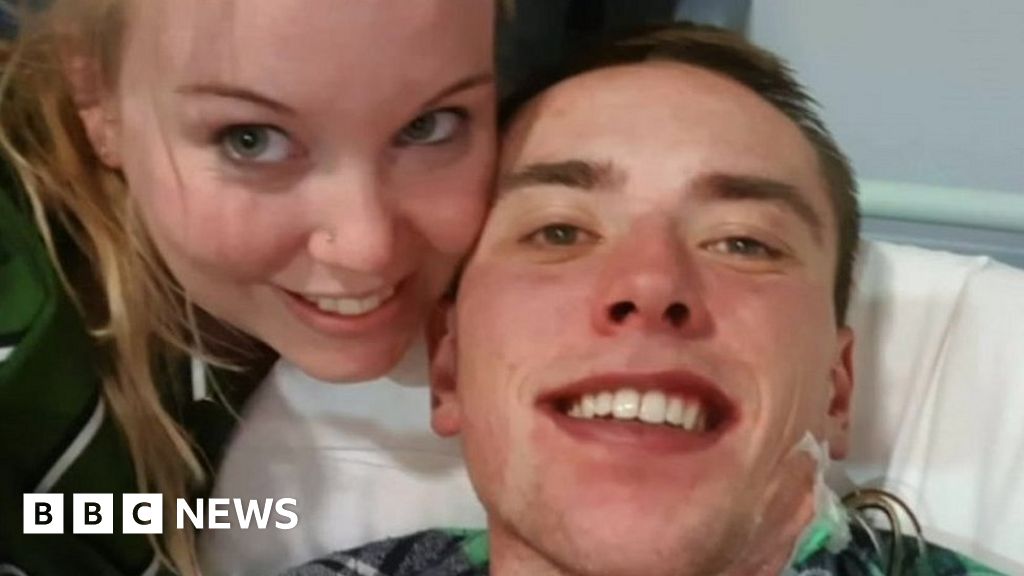 Image caption, The couple, pictured after his successful transplant, were looking forward to a bright future together

A widow whose husband contracted an infection following a pioneering heart-lung transplant said she wanted answers from the hospital that cared for him.

Aaron Green, of Arundel, West Sussex, had the world-first surgery at Royal Papworth Hospital in Cambridge in 2019.

It was a success, but an infection may have led to his body rejecting the organs. He died in July, aged 26.

Royal Papworth said its thoughts were with the family and it had never recorded an outbreak of the bacteria.

Mr Green was the first person to have a heart and lung transplant from a donor whose heart had stopped beating, which the hospital said was a major breakthrough.

After his recovery, he was back playing cricket and riding his bike, and things were “really positive”, his widow said.

The couple married in September 2020, but he then became ill, having contracted the bacterial infection mycobacterium chelonae.

“He just got more ill and more ill, he lost so much weight.

“He reverted back to being in a wheelchair and on oxygen, and eventually we were told he would have two to four months to live.”

She and her husband suspected his decline could be linked to an outbreak of another bacteria at Royal Papworth, which was believed to have been contracted by patients through the hospital’s water supply.

Mycobacterium abscessus was contracted by 32 other hospital patients and led to a serious incident report at the trust.

A joint inquest is to be held to consider whether it contributed to the deaths of two patients,

Image caption, Aaron Green told BBC Inside Out in 2020 he “couldn’t believe” how quickly his new heart and lungs “kicked in”

Image caption, The team at Royal Papworth Hospital had been keeping check on Aaron Green’s new organs following his transplant

“We think it [mycobacterium chelonae] came from the water supply at the hospital,” said Mrs Green.

“There were a few other patients that came in at the same time that had caught similar bacteria and we received a letter one day, when we were in clinic, saying ‘don’t drink the water here’.

She has instructed lawyers to help establish what happened to her husband and five other patients who also became ill following surgery.

“Hopefully the investigation will find out for sure if the two are connected,” she said.

“I have a strong inkling that the two would be; it’s too suspicious and Aaron really wanted to know the answers and he deserves the answers to come to light.”

A review into Mr Green’s death, ahead of an inquest, is due to take place in Cambridgeshire later this month.

A spokesperson for Royal Papworth Hospital NHS Trust said: “Our thoughts are with Aaron’s family at this difficult time.

“There has never been a recorded outbreak of mycobacterium chelonae at Royal Papworth Hospital and we are fully supporting the coroner’s inquiries.

“In 2019, we did identify cases of mycobacterium abscessus, a different organism, and as part of our extensive investigations we have put multiple measures in place to maintain safety, including treatment of the water supply and installing specialist filters on taps and showers.” Microsoft Teams just fixed one of its most annoying...

Facebook is pushing Reels into nearly every part of...

‘I Was Married To The Real Life Wolf Of...

Braxton Berrios on Zach Wilson: ‘This isn’t a fluke....

Facebook turned over chats used in prosecution of 17-year-old...

White House Walks Back Biden Ruling Out Rockets for...

An Oregon rape victim was jailed until she testified...

Renault to Build Electric SUV in France as Part...

Embracer snaps up the rights to ‘The Lord of...

Dear Sophie: Can I start a company or a...

Alcoa Calls On US, Allies to Sanction ‘Cheating’ Russian...

Local Motors, the startup that created the Olli autonomous...

Instacart is the latest service to add a temporary...

Impact of war on LGBTQ community in Ukraine

So Far, The Metaverse Is Only Hurting Meta

India does not plan to restrict low-cost foreign smartphone...

Nunez needs to ‘calm down’ in front of goal,...

Panasonic Is Scouting U.S. Sites for New Battery Factory by 2024

Fleming returns to Met in new opera based on 'The Hours'