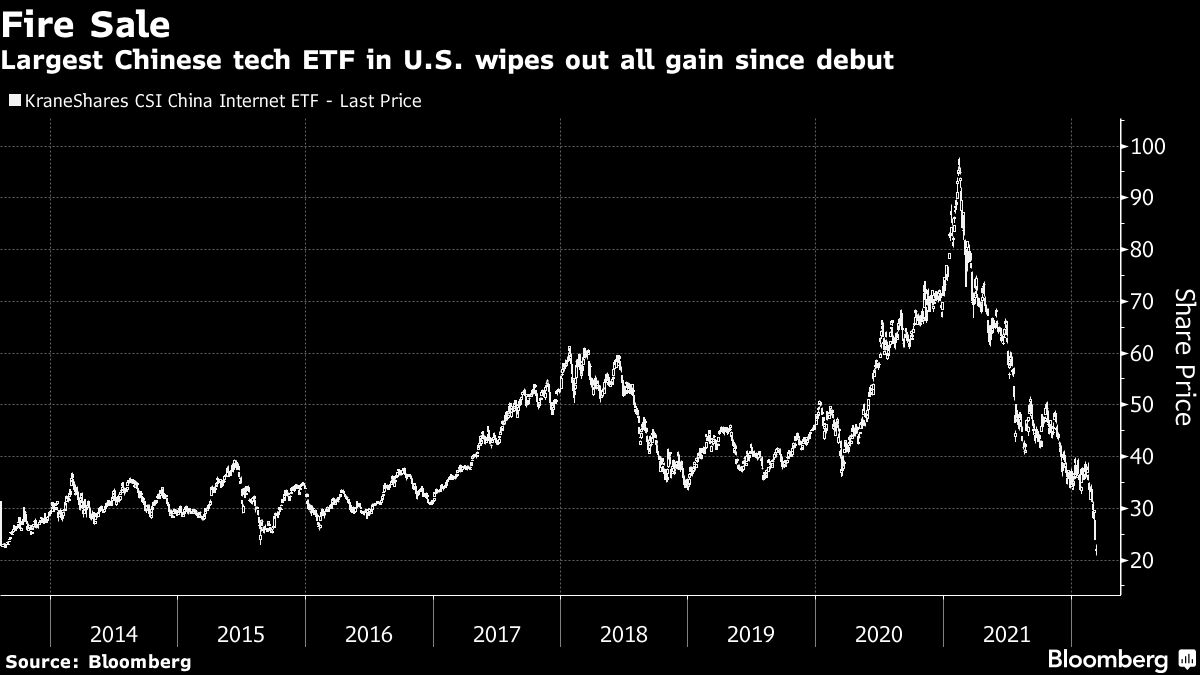 The selloff in Chinese stocks has been so intense that its erased all the gains in the largest China tech exchange-traded fund in the U.S. since the debut in 2013.

KraneShares CSI China Internet Fund (KWEB), a $4.9 billion ETF that invests in Chinese tech companies, slumped more than 11% Monday, bringing its decline over the past three days to 28%. Its loss this year has surpassed 42%, wiping out all the gains, including dividend payouts, since it started trading nine years ago.

Even as the stock tumbled, the ETF posted consistent inflows in January and February before those flows reversed course this month. The buy-the-dip strategy proved no match for a broader selloff as a confluence of factors, including

renewed concerns about the delisting of American Depositary Receipts from U.S. exchanges, Covid outbreaks in China and the geopolitical tension stemming from Beijings position in the Russia-Ukraine war weighed on sentiment. JPMorgan Chase & Co.

downgraded 28 Chinese stocks trading in the U.S. and Hong Kong Monday, saying the companies are uninvestable on a six- to 12-month horizon.

The China internet space needs catalysts, which are currently few and far between, for buyers to come back in, wrote Brendan Ahern, chief investment officer at Krane Funds Advisors LLC, which manages the ETF, wrote in

a blog post titled Sum of All Fears on Monday. Positive news on the Russia/Ukraine conflict, better vaccines in China, buybacks, go private deals, and spinoffs are all potential candidates to revive the sector.

The KWEBs assets has almost halved since peaking at nearly $10 billion in November, despite persistent inflows to the fund. It still ranks as the second-largest China-focused ETF in the U.S., trailing only the $5.5 billion

iShares MSCI China ETF. Its shares outstanding jumped more than 200% between mid-July and February as investors piled on.

Baidu Inc. and Meituan, accounted for 46% of KWEBs holdings. The decline of these companies this year ranges from 25% to 50%.

said that it plans to convert all of its holdings of Chinese ADRs to shares trading in Hong Kong by the end of the year to minimize the de-listing risk. The U.S. passed a law in December 2020 that threatens to expel Chinese companies from American exchanges if they fail to comply with its auditing requirement.

With assistance by Yiqin Shen EXPLAINER: What’s happened and what’s next in Sri Lanka

The TIPS Market And The Fed (Radio)

Met Police: Cressida Dick to stand down as commissioner...

M’s, Angels get in big brawl after inside pitches,...

No, new Lord of the Rings film won’t feature...

Best Ways To Keep Your Home Clear of Mosquitoes,...

What does the CDC’s new mask guidance mean for...

NATO to pledge aid to Baltics and Ukraine, urge...

England: Sarina Wiegman calls on Lionesses to ‘make everyone...

‘I’d Rather Get A Divorce’: Minecraft Dad Dragged for...

N.H. poll: Biden’s favorability in the state is at...

WNBA to pay tribute to Brittney Griner at season’s...

Ukrainian orphans stranded as American families struggle to save...

4 Years On, a New Experiment Sees No Sign of ‘Cosmic Dawn’