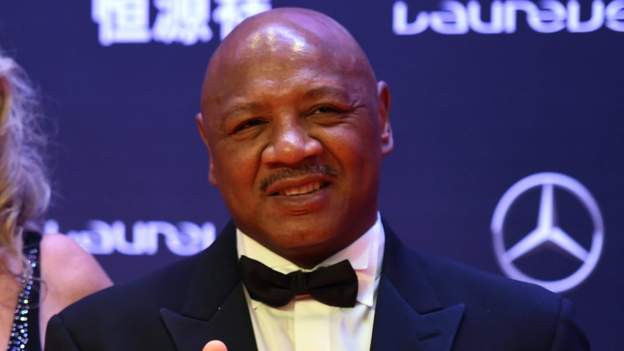 Hagler celebrates after defeating Roberto Duran for the WBA, WBC and IBF Middleweight titles on 10 November, 1983 at Caesars Palace in Las Vegas

The American dominated the middleweight division from 1979 until his controversial defeat by Sugar Ray Leonard in April 1987.

Hagler took part in 67 fights during his 14-year professional career.

He won 62 of those, 52 by knockout, while he drew two and lost three times.

Hagler made 12 successful title defences and famously won the classic fight known as ‘The War’, when he beat Thomas ‘Hit Man’ Hearns in April 1985. ‘America’s Got Talent’ Results: All the Contestants Who Made...

The third and final "America's Got Talent" quarter-final took place last night, with only seven acts making it through to the semis next week.
Read more

US senators promise vaccines for Taiwan amid China row

This week, Bret and the panel discuss President Biden's agenda during his first trip overseas as president.
Read more

Chinese leaders are preparing a political history that would give President Xi Jinping status beside the ruling Communist Party’s most important figures, setting the stage for Xi to extend his rule next year
Read more

The company behind the largest cryptocurrency fund is building out its ETF team, despite dimming odds that U.S. regulators will approve the structure this year.
Read more

Sling TV on Roku: Is it available and how...

Can you get Sling TV on Roku? Our guide answers the question and offers and step-by-step guide on how to install
Read more

A bombshell new study claims to have proof that Chinese scientists created COVID-19 in a lab and then tried to reverse-engineer versions of the virus to make it look like it evolved naturally from bats.
Read more

House votes to hold Bannon in contempt of Congress

The House on Thursday voted to hold Steve Bannon in contempt of Congress after he defied a subpoena from the Jan. 6 committee, a remarkable censure of the former Trump White House strategist that leaves the Dep...
Read more

The hobbyist model drone that crashed on the White House South Lawn Monday was too small to be detected by a radar. Bill Plante reports on new questions being raised about White House security.
Read more

"At that point, I said that whereas I had risked my life to defend my country while in the Air Force, I was not willing to risk my life to teach a class with an unmasked student during this pandemic," said the college professor.
Read more

Residents of the Atlanta area are experiencing the worst inflation among major U.S. cities, with October prices up 7.9% from a year ago -- more than double the rate in San Francisco.
Read more

Two British men are making emotional pleas, fearing their families have joined ISIS. Their wives and children disappeared after leaving for an Islamic pilgrimage to Saudi Arabia. Charlie D'Agata reports on the narrative that has tragically become all too fami…
Read more

Everton manager Carlo Ancelotti predicts the race to qualify for Europe will go down to the final day of the Premier League season, after the Toffees drew 0-0 at Aston Villa.
Read more

TSA changes may mean travelers can’t opt out of...

AAA estimates for the first time that more than 100 million Americans will travel at least 50 miles over Christmas and New Year's. Nearly six million will get on an airplane, and travelers may not have a chance to avoid airport body scanners. Officials tell C…
Read more

Climate change: UK sets out blueprint for $100bn in...

A key pledge on climate funding has still not been met, and the money is not sure to be there before 2023.
Read more

Taylor Swift transforms the Grammys into an enchanted forest

Severely ill – and still made to quarantine in...

The law says some severely ill are exempt from hotel quarantine - but they don't always get a choice.
Read more

Monthly premiums for health coverage through the Affordable Care Act federal marketplace fell an average of 40% because of a boost in subsidies from government stimulus funds, the Biden administration said.
Read more

Abdoulaye Doucoure: Everton midfielder out for up to 10...

Everton midfielder Abdoulaye Doucoure will be out for up to 10 weeks with a small fracture in his foot, says Carlo Ancelotti.
Read more

Her levies would make those with funds want to leave.
Read more

President Biden has a majority positive approval rating over his handling of the coronavirus pandemic, a ...
Read more

A judge on Monday said that Kobe Bryant's widow must turn over her private therapy records dating back to 2010 to Los Angeles County, as prosecutors say the records are necessary for their defense again...
Read more

The iPhone 13 Pro and Pro Max could get autofocus and an extra element for their ultra-wide cameras.
Read more

Broncos vs Jaguars live stream: how to watch NFL...

Here's how to get a Denver Broncos vs Jacksonville Jaguars live stream and watch the NFL week 2 game from anywhere, as Bridgewater looks to catch fire against a team that's in a hole.
Read more

Presented by the Household & Commercial Products Association With Daniel Lippman FARA FRIDAY: The Ethiopian government has hired more help in Washington as the Biden...
Read more

This was a week of remembrance for the six million Jews murdered in the Holocaust. Now, for the first time, the State Department, in conjunction with France, will dole out $60 million in reparations to survivors. Margaret Brennan has the story of one survivor.
Read more

After Broadway’s unprecedented 18-month pandemic shutdown, CBSN Originals’ new documentary looks at how people on stage and behind the scenes pivoted to survive.
Read more

A planned $11 billion tunnel seen as a key to train travel up and down the northeastern U.S. has received a key federal environmental approval
Read more

Even if Congress punts the next deadline into late December, prospects are bleak for a bipartisan government funding deal before year's end.
Read more

The production of the "Mission: Impossible 7" was shut down for at least two weeks after one of the production members tested positive for the coronavirus."We have temporarily halted production o...
Read more

US economy accelerates as recovery continues

The economy grew strongly in the first quarter of 2021 helped by heavy government spending on Covid aid.
Read more

Yellen expects inflation to linger, then ease later in...

The most recent Consumer Price Index showed prices have gone up 5.4 percent in the past 12 months.
Read more

The government does not have a plan to rescue those left behind in Afghanistan says the Labour leader.
Read more

The emotional homecoming of a man imprisoned for nearly 32 years. A judge ruled he was wrongfully convicted of murder, but is he home for good? Questions linger about the witness who blamed him. "48 Hours" correspondent Erin Moriarty reports Saturday, Apri…
Read more

England manager Gareth Southgate tells BBC Sport that his 33-man provisional squad for Euro 2020 is "not at its peak yet".
Read more

Chinese Premier Li Keqiang has vowed to hold officials accountable over mistakes during recent floods that led to the deaths of hundreds of people in a major provincial capital, including 14 who were trapped when the city’s subway system was inundated
Read more

The former chief lawyer for Blizzard Entertainment Inc has joined a Los Angeles-based avatar technology company that is on the verge of a launching an online marketplace for digital goods known as non-fungible tokens.
Read more

As US schools resume testing, large numbers are opting...

Standardized tests are returning to the nation’s schools this spring, but millions of students will face shorter exams that carry lower stakes, and most families are being given the option to forgo testing entirely.
Read more

Analysis: Bipartisan infrastructure bill would add half a million...

Bipartisan infrastructure legislation would create nearly half a million manufacturing jobs before the end of President Biden's first term, according to a new analysis released Tuesday.The report...
Read more

The biotech firm Emergent BioSolutions is facing a congressional inquiry Wednesday over alleged deficiencies in their manufacturing of COVID-19 vaccine ingredients.
Read more

The Alienware m17 is a staple gaming laptop at this point, but the 2021 refresh brings some of the strongest gaming laptop performance we've seen.
Read more

Public prosecutor appears to accept 28-year-old's explanation that he struck Emmanuel Macron "without thinking," to "express his unhappiness."
Read more

Sen. Joe Manchin (D-W.Va.) on Wednesday said he will not guarantee he'll support a fast-track process for a sweeping infrastructure package, rejecting a key demand by progressive senators who want such a pledge...
Read more

China stocks see biggest slump in US since 2008...

The value of New York-listed Chinese companies has plummeted after a series of crackdowns by Beijing.
Read more

It’ll surprise few that after a digital mosaic sold for $69 million in March as an NFT, or non-fungible token, comic-book giants Marvel and DC informed their artists they shouldn’t try the same with the likes of Black Widow or Batman.
Read more

Charleston shooting victim’s family members share how they are...

CBS News weather producer David Parkinson talks about dangerous conditions ahead of the July Fourth holiday weekend for millions of people in the western United States and Canada.
Read more

Return to school filled with uncertainty in Mexico

With bottles of gel, temperature checks and wide-open windows a new school year has begun for millions of children in Mexico
Read more

Officials identified 13 U.S. service members who were killed in an ISIS-K attack outside of Kabul's airport on Friday. Among them was 23-year-old Marine Corps Sergeant Nicole L. Gee who just days before her death was one of several Marines seen cradling and c…
Read more

Locals say the child was killed by security forces in her home, becoming the crackdown's youngest victim.
Read more

Mr Xi is only the third leader to issue a "historical resolution" after Mao Zedong and Deng Xiaoping.
Read more

After months of talks, the White House is pushing for a Senate vote within two weeks.
Read more