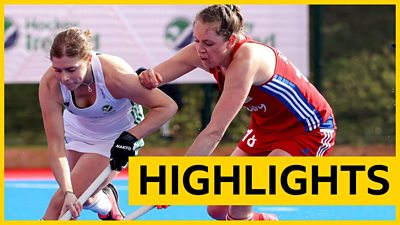 Olympic champions Great Britain fight back from conceding an early goal to beat Ireland 2-1 in the opening game of the three-match series in Belfast.

Roisin Upton put the hosts ahead with a seventh-minute penalty stroke but impressive Lily Owsley levelled just after half-time with Sarah Robertson hitting the winner early in the final quarter.

The sides will meet again at Queen’s University on Sunday before Tuesday’s concluding match in the series. Marcus Smith: Smith starts at 10 for England against...

Marcus Smith will start at 10 for England, with captain Owen Farrell at 12, against Australia on Saturday.
Read more

The ceremony is split over two days for the first time, with more winners to be revealed on Sunday.
Read more

Simone Biles will compete in the beam final as she takes up her final chance of an individual medal at an Olympics where she has withdrawn from four other finals.
Read more

During the 17 years "Don't ask, Don't tell" was in place, nearly 14,000 service members were discharged for being gay, and since the end of WWII some 100,000 members of the military were kicked out simply for being part of the LGBTQ+ community. As Pride month…
Read more

U.K. Home Secretary Priti Patel is set to announce a “wholesale” reform of the nation’s immigration system in the wake of its exit from the European Union.
Read more

Queen Elizabeth attended a private ceremony to celebrate the christenings of two of her great-grandchildren on Sunday.
Read more

A Democratic Georgia state lawmaker was arrested by state troopers and charged on Thursday after she knocked on Gov. Brian Kemp's (R) door multiple times as he signed a controversial voting bill into law. ...
Read more

Dan Bongino blasted President Biden's “hasty departure” from Afghanistan with “no concern” for the people being left behind as “insane” Saturday on “Unfiltered with Dan Bongino.”
Read more

Secretary of Housing and Urban Development Marcia Fudge on Wednesday weighed in on the conversation regarding policing in America, writing on Twitter "I understand every police officer wants to go home safely at nig...
Read more

Martin Odegaard: Arsenal closing in on permanent signing of...

Arsenal are working on a deal to sign Real Madrid and Norway midfielder Martin Odegaard on a permanent transfer.
Read more

NETS VS. BUCKS SERIES PREVIEW: HOW TO BET ON...

Between the injury to Anthony Davis that derailed the Lakers’ playoff hopes and the meniscus tear to Joel Embiid’s knee that has 76ers fans frowning, it feels like we could have the de facto NBA Finals starting Saturday when the Milwaukee Bucks play Game 1 ag…
Read more

Allen West to step down as Texas GOP chairman

Former Rep. Allen West is stepping down from his post as chair of the Texas Republican Party, a move that is likely to fuel speculation that he is preparing to run for statewide office."It has been my distinct hono...
Read more

Yorkshire batsman Dawid Malan recalled to the England squad for the third Test against India, with Dom Sibley and Zak Crawley both dropped from the 15-man squad.
Read more

Jamie Lynn Spears shared photos of herself on Instagram days after asking to be left "alone" regarding Britney Spears' conservatorship drama.
Read more

BBC World News looks back at the last three decades as it celebrates its 30th anniversary.
Read more

The vaccine mandate would have taken effect January 12, but the stay pauses its enforcement until an appeals hearing, scheduled for March.
Read more

England's spirited fightback in the second Test against India is checked by the loss of Rory Burns late on the second day.
Read more

Israel vaccination ‘green pass’ may offer a glimpse of...

While the rest of the world debates how a Covid vaccination passport will work, Israel has introduced one that is already opening restaurants, bars and events and offering a sense of normality that may soon be replicated elsewhere.
Read more

This week's MTV News Bop Shop features a killer cut from Dijon, a disco throwback from Bibi, some new takes on Taylor Swift (from Taylor herself), and so much more.
Read more

Amazon.com (AMZN) Jeff Bezos to Go to Space on...

Jeff Bezos said he will go to space when his company, Blue Origin, launches its first passenger-carrying mission next month.
Read more

One buried Google Maps setting you need to change...

Before you use Google Maps to get somewhere, there’s one simple change you can make to take back at least a piece of your privacy.
Read more

Senators aim to increase oversight of cryptocurrency mining with...

The latest estimate for the number - a measure of the rate of infection - is between 0.7 and 0.9.
Read more

A suspect is at large after after shooting a police officer near the intersection of Riverport Road and West Mallory Avenue in Memphis, Tennessee, according to Fox 13 reporter Siobhan Riley.
Read more

Samsung Galaxy tablet deals can save you over $200...

Washington girl’s lemonade stand shut down by city while...

Residents in Everett, Washington, have reportedly raised concerns about a nearby homeless encampment that some say received little attention from the city, while the city was quick to shut down a lemonade stand operated by a 7-year-old girl.
Read more

‘Neptune’ appears in the waves during storm in Newhaven

The image resembling the Roman god of water was captured as waves crashed over a harbour wall.
Read more

In a victory for landlords, a federal judge in Ohio ruled Thursday that the U.S. Centers for Disease Control and Prevention exceeded its authority when it ordered a moratorium on evictions in connection with the coronavirus pandemic.
Read more

Will Smith is opening up about his mental health journey for his forthcoming YouTube docuseries, even discussing contemplating suicide in the series trailer.
Read more

Twitter will let businesses add a shopping section to...

Twitter's Shop Module feature will allow businesses to showcase their products at the top of their profiles.
Read more

"Sexual assault is an abuse of power and an affront to our shared humanity," the president said in a statement.
Read more

Take RTX gaming on the go for less than...

Enjoy high performance gaming on the go with these RTX 30-series laptops for under $1,000.
Read more

Cuomo ‘eager’ to tell his story, but state AG...

"I can’t tell you how eager I am to tell my side of the story and the time will come," the governor said.
Read more

New York Democratic Gov. Andrew Cuomo has spent the last several months fending off calls for him to resign over a series of allegations of sexual harassment from former female employees.
Read more

A mix of inflation, strong demand and diminished product availability are leading to some of the least-generous Black Friday and Cyber Week deals on record.
Read more

One adult from the last breeding pair died in 1982, but chicks have now been confirmed in Hoy.
Read more

What the hell is Mitch McConnell doing?
Read more

Darrin Porcher: There’s A Lot Of Statements But Not...

On Fox Across America with Jimmy Failla, former NYPD Lt. Dr. Darrin Porcher explains why President Biden’s reported plan to take on crime across the country doesn’t give local police departments what the need to uphold the law. “You need to have a targeted en…
Read more

The pop star's father has been accused of trying to extort his daughter before departing the role.
Read more

Timmy Allen was an all Pac-12 first-team forward at Utah last season. He has not become self-satisfied or complacent at Texas, and wants to expand his range.
Read more

Officials are investigating why a tour bus got off a roadway and subsequently rolled over on its side, leaving all 57 passengers with injuries.The tour bus was on its way to Niagara Falls, when N...
Read more

The 31-year-old from Hartlepool was making a documentary in Africa for a Muslim television network.
Read more

Watch some of the best bits from day four at Wimbledon including an incredible shot by Coco Gauff and a pocket mishap on court two.
Read more

Israeli chipmaker Valens Semiconductor Ltd. is in talks to go public through PTK Acquisition Corp., a blank-check firm, according to people with knowledge of the matter.
Read more

Rita Moreno talks with Lilia Luciano about her new documentary, the obstacles she faced as a Puerto Rican actress in Hollywood and how she's hoping to pave the way for change for other Latina power players like show creator Gloria Calderón Kellett.
Read more

Sarah Buick, 25 and an experienced walker from Dundee, posted the message to social media early on Tuesday.
Read more

Stream your PC games to your Xbox with Nvidia GeForce Now.
Read more

England bowler Ollie Robinson claims the wicket of Rohit Sharma with the first ball of the new ball during the fourth Test against India at The Oval.
Read more

Florida is reporting the lowest amount of coronavirus cases per capita in the nation after Gov. Ron DeSantis was widely criticized by media outlets for his handling of the virus.
Read more

Sam Cane: New Zealand captain out for up to...

All Blacks captain Sam Cane is ruled out for up to six months after suffering a pectoral injury playing for the Chiefs.
Read more

A fishing journey with a goal far greater than...

William Dunn has taken thousands of kids out fishing over the last dozen years. He was inspired by time he spent with a young neighbor whose dad wasn't around and now has a goal far greater than catching fish. Janet Shamlian has the story.
Read more

Funding for victims of ‘Havana Syndrome’ to be included...

Despite its retro looks, the Floatride Energy Grow is a 100% modern neutral shoe, made from 50% plant-based materials.
Read more

A privately designed, unmanned rocket built to carry satellites into orbit exploded in a fireball off the California coast
Read more

How a top-of-the-line U.S. Navy warship could be T-boned by a slower, less maneuverable containership remains inexplicable. But the result is indisputable: seven American sailors dead and the USS Fitzgerald limping into port. David Martin reports.
Read more

Kinzinger: GOP downplaying Capitol riot something ‘out of North...

How has Edinburgh's landscape changed in a year?