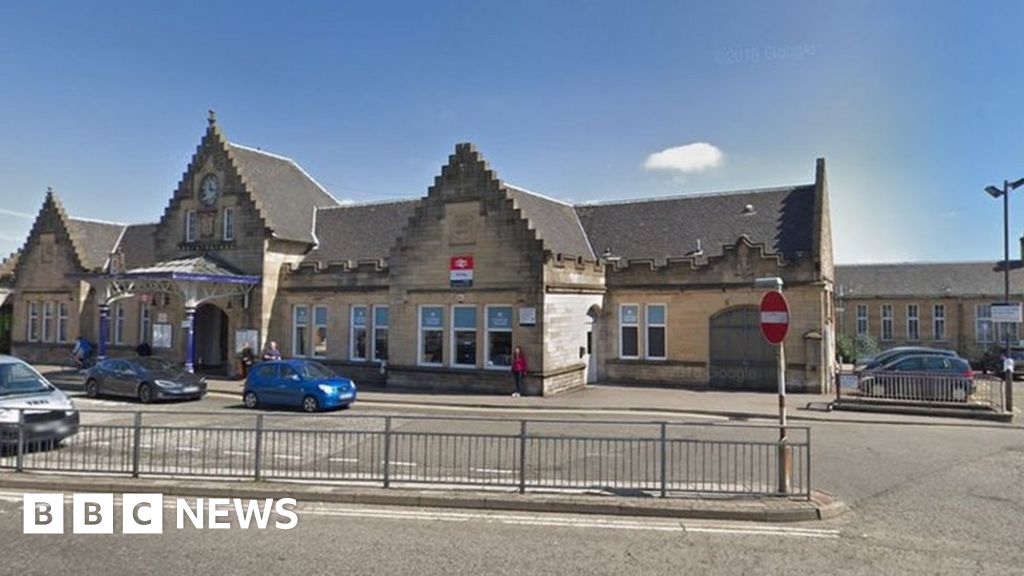 Three police officers have been injured after they were attacked by a group of youths at Stirling railway station.

The officers were treated for minor injuries after they were called to a gathering at the station car park on Friday night.

Five people were arrested in connection with the incident.

British Transport Police said the officers asked the group to leave just before 22:30, before several of them were assaulted.

Police are appealing for anyone with information to come forward. ‘Big Storage’ Is the Next Big Technology in the...

The ability to bank lots of power for when it’s needed most holds the key to making decarbonization cheaper.
Read more

New York City residents are casting their early ballots in a crowded mayoral primary race. According to a new poll from WNBC, Politico and Telemundo 47, Democratic candidates Eric Adams and Kathryn Garcia are leading the pack. Dianne Morales, another Democrat…
Read more

Harris says Mexico, US can work together to improve...

Vice President Harris voiced optimism on Friday that the Biden administration can work with the Mexican government to stem the flow of undocumented migration by improving the quality of life for citizens of Guatemal...
Read more

Police to record crimes motivated by sex or gender...

Ministers agreed to the change on "an experimental basis" after calls for misogyny to be made a hate crime.
Read more

GOP Rep. Liz Cheney is facing a wave of GOP primary challengers at home as the Wyoming congresswoman and avowed Trump critic takes center stage with the start of the Jan. 6 select committee hea...
Read more

Animal rights activists have published a "map" of thousands of gun owners and their addresses.
Read more

Biden vs. The Blob

Inglewood, Calif. (AP) -- Justin Herbert and the Los Angeles Chargers showed early in the season they can rally to win close games on the road.
Read more

Brazilian police say they have burned 131 boats used by gold miners in the heart of the Amazon, raising tensions in an isolated region rife with poverty and crime
Read more

The U.S. House of Representatives failed to pass legislation that would have extended a national moratorium on renter evictions, leaving millions of Americans at risk of losing their homes after the ban lifts on Saturday.
Read more

Want the lowdown on European markets? In your inbox before the open, every day. Sign up here. McDonalds Corp. is set to add 20,000...
Read more

Trump holdovers are denying Social Security benefits to the...

This cruel rule change is in direct opposition to President Biden’s agenda of protecting and expanding Social Security. He needs to reverse it immediately and make sure that the Social Security Administration is working for the American people, not against us.
Read more

Sununu says he’ll decide on Senate bid ‘in the...

New Hampshire Gov. Chris Sununu (R) on Saturday said he will decide on a potential Senate bid in "the next week or so," as many wait to see if the chief executive of the Granite State will make a run for Congress....
Read more

Puerto Rico is pulling the plug on a $70 million project to build a film district in the capital -- complete with sound...
Read more

Swedish investment firms that specialize in snapping up small family-owned businesses are increasingly looking overseas as the race to find suitable targets heats up.
Read more

Fans of Country Music Television fumed on social media after the network tweeted out a call to "wear orange" as part of a coordinated stance against gun violence.
Read more

Yellowstone bear charges at woman who approached with phone,...

The National Park Service has opened an investigation into a woman who was filmed approaching an area near a grizzly bear in Yellowstone National Park to take a photograph earlier this month.
Read more

Denmark assistant manager Morten Wieghorst reflects on their Euros journey, his own battle with illness, and his time as a player in Scotland as his team prepare to face Steve Clarke's side.
Read more

Two deaths shine spotlight on violence against women in...

Cynthia Makokha was a 17-year-old student and volleyball player. Agnes Tirop was a 25-year-old rising athletics star, who finished fourth in the 5,000m race at the Tokyo Olympics and had won two World Championship bronze medals.
Read more

In California’s recall, Democrats would rather not have a...

Party leaders want to keep other Democrats off the ballot, even though it would mean forfeiting the governorship if Gov. Gavin Newsom loses his recall.
Read more

In a 2020 Gallup poll, confidence in police dropped to the lowest reported level in the survey's history.
Read more

A special-purpose acquisition company backed by Martin Blessing, a former chief executive officer of Commerzbank AG, fell as much as 1.5% after raising 415 million euros ($489 million) in the biggest such listing in Europe since a global blank-check boom took…
Read more

Want the lowdown on European markets? In your inbox before the open, every day. Sign up here. Giorgio Armani SpA sees pre-pandemic level sales...
Read more

German coach booted from Olympics after punching horse during...

A German coach has come under serious criticism and was ousted from the Olympics after she was captured on video punching a horse that refused to perform during the modern pentathlon on Friday.
Read more

Star U.S. gymnasts offered stark criticism Wednesday of the FBI's handling of its investigation into sexual assault and harassment in the U.S. gymnastics, prompting criticism from lawmakers of the Department of Justice....
Read more

The suspected gunman in the shooting at a Southern California synagogue on the last day of Passover in 2019 has pleaded guilty to murder and other charges as part of an agreement with prosecutors to avoid the death ...
Read more

President Joe Biden's nominee as U.S. representative to a U.N. aviation body suggested on Wednesday that Belarus should be temporarily barred from voting at the council in response to its May diversion of a Ryanair Read more

The Reconciliation Bill Should Invest in America’s Kids |...

The reconciliation package should prioritize investments in kids, because doing so has huge shared benefits and among the highest rates of return for any social investment.
Read more

A US judge has approved a bankruptcy plan for the maker of OxyContin painkillers.
Read more

A herd of 15 elephants has wreaked havoc in China, trampling crops and causing more than a million dollars' worth of damage, after the animals escaped from a nature reserve last year.
Read more

"That baby is set to become a manager by age 5," one commenter said.
Read more

Videos show dozens of ticketless fans pushing through barriers and gates ahead of the match.
Read more

President Joe Biden will push the case for his $2.3 trillion infrastructure plan in the reliably Republican state of Louisiana
Read more

American tourists who have been fully vaccinated against Covid-19 will be able to visit the European Union over the summer, more than a year after shutting down nonessential travel from most countries to limit the spread of the coronavirus, the New York Times…
Read more

Powerful, beautiful and simply brilliant - Apple's taken the perfect tablet and made it even better.
Read more

Meet Sydney artist Eileen Kramer, who has had some of her most productive years since turning 100.
Read more

The lawsuit says the mask mandate caused her to cancel a trip to Hawaii.
Read more

Presented by Ørsted Good Thursday morning! People are talking about Chris Christie running for president. Did they ever stop? An Axios article yesterday reports that unnamed...
Read more

Singer-turned-photographer Bryan Adams recreated life on tour for the 2022 edition of Pirelli's glamorous annual calendar, which is themed "On the Road."
Read more

Immigration and Customs Enforcement deported some parents between July 2017 and July 2018 without giving them the opportunity to bring their children, contradicting claims made by the agency and the Department of Homeland Security, according to a newly releas…
Read more

No Time to Die’s huge debut shakes and stirs...

No Time to Die has seemingly jumpstarted the theatrical box office after a superb opening weekend performance.
Read more

Scot Kim Avis who went missing in US guilty...

Kim Avis disappeared after reportedly going for a swim before later being arrest and extradited.
Read more

This Day in History: May 24

Four Islamic fundamentalists convicted of bombing New York's World Trade Center in 1993 are each sentenced to 240 years in prison. "Hollywood Madam" Heidi Fleiss is sentenced to three years in prison and fined $1,500 for running a call-girl ring that catered …
Read more

The Democratic National Committee (DNC) on Wednesday announced a massive funding agreement with state parties as it gears up for the 2022 midterms.The DNC said in a statement the four-year deal will provide $23 mil...
Read more

Five questions and answers about the debt ceiling fight

Democrats and Republicans are locked in a high-stakes battle over the federal debt ceiling, with the U.S on track to default as soon as next month.GOP senators say they won’t take any action to keep the U.S. solvent, insisting that Democrats must do...
Read more

Even the president's ambitious calls to transition to clean energy and fight climate change omit any mention of putting a price on carbon dioxide.
Read more

Scotland's Jemma Reekie says "I'm in better shape than that" after finishing fourth in the Olympic 800m final and vows to "getter better".
Read more

Mississippi Gov. Tate Reeves (R) on Friday announced at a press conference that he has no plans of issuing a statewide mask mandate or requiring state employees to get vaccinated as the state experiences a spike in COVID-...
Read more

Family of man killed in police pursuit speaks out

"My brother was the happiest man in the world," his brother said Friday. "He didn't deserve what he got."
Read more

Lawmakers agree NCAA needs NIL help, but how much...

A federal law governing how college athletes can earn money off their fame seems certain to pass — at some point.
Read more

Airplanes and helicopters are using sophisticated surface radar to scan the ocean for any debris of the missing Malaysia Airlines plane. CBS News' Chip Reid reports on why the shallow waters could also be adding to the difficulty.
Read more

This weekend, "48 Hours" looks at the cases of two women that moved to Florida, then vanished. Susan Spencer looks at one detective's search for a killer.
Read more

"I have trouble remembering a convicted defendant that has shown such little remorse for what they've done," the judge said.
Read more

Police are conducting enquiries but say at this stage the death is not being treated as suspicious.
Read more

Medically vulnerable in US put near end of vaccine line