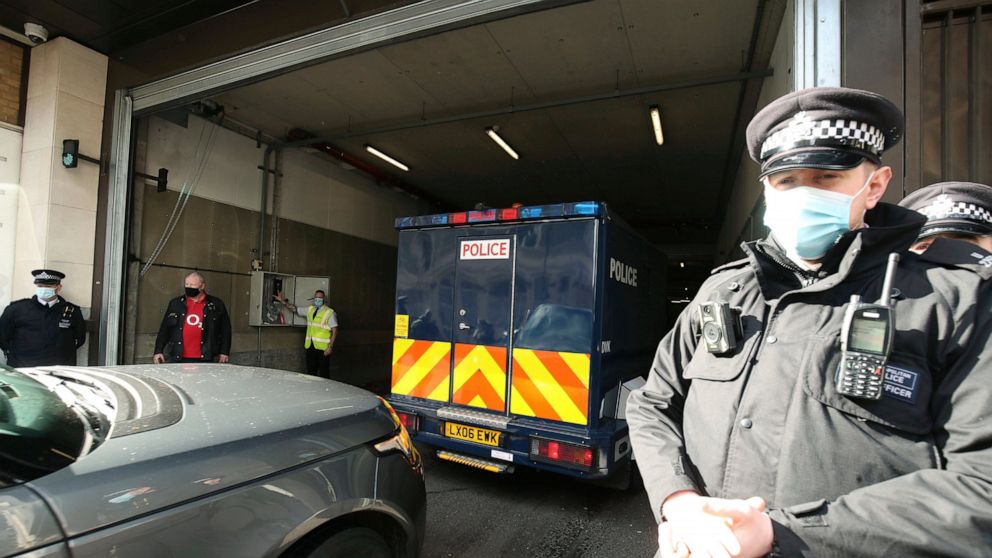 LONDON — A serving British police officer accused of the kidnap and murder of a woman in London appeared in court for the first time Saturday.

Wayne Couzens, 48, is charged with kidnapping and killing 33-year-old Sarah Everard, who went missing while walking home from a friends apartment in south London on the evening of March 3.

The case has sparked a national outcry, and the Metropolitan Police has expressed anger and shock that one of its own was arrested for the crime. The force said Couzens joined its ranks in 2018, and most recently served in the parliamentary and diplomatic protection command, an armed unit responsible for guarding London embassies and Parliament.

Couzens, who wore a gray tracksuit, stood as the charges were read to him during Saturdays brief hearing. He was remanded in custody to appear at Londons Central Criminal Court on Tuesday.

Everards body was found hidden in an area of woodland in Kent, southeast of London, on Wednesday.

In the wake of her disappearance and killing, many women have taken to social media to share their own experiences of being threatened or attacked while walking outside.

Some had planned to organize a vigil in Everards memory on Saturday, but a High Court judge said such a gathering would be unlawful due to coronavirus restrictions.

The Metropolitan Police stressed Saturday it shared the nations outrage at this crime and understood the organizers frustrations that the gathering had to be canceled, but said it was important to remain vigilant against the threat of COVID-19. Actress Rita Moreno on her favorite actor, her prized possession and more

These Five Companies Are Big Enough to Run Hollywood

Gallen vs Huni: how to watch tonight’s fight online...

Paul Gallen has proven his worth in the ring, but young up-and-coming heavyweight Justis Huni could be his toughest challenge yet – here's how to watch the fight in Australia.
Read more

The chancellor vowed to fast-track aid after visiting some of the worst-hit areas in western Germany.
Read more

The video features women dressed as geishas being pulled in a rickshaw to the restaurant.
Read more

President Biden and his one-time boss, former President Obama, haven’t seen each other in person since the Inauguration. And those close to both presidents don’t expect them to meet until Obama’s long-awaited portrait unveiling at the White...
Read more

A Chinese man has been fined 200,000 yuan ($31,000) and given a two-year suspended prison sentence after concealing contact with Covid patients and flouting quarantine, as the country toughens restrictions in an uphill battle to eliminate the virus.
Read more

Loki promised one type of TV show, then delivered...

Loki started out as a weird sci-fi spin on a detective series, but quickly morphed into an incoherent adventure show.
Read more

Why are flowers getting more expensive?

Increased demand, Brexit costs and Covid-related supply issues have all pushed the price of flowers up.
Read more

Israel-Gaza: Why is the region blurry on Google Maps?

High-resolution images of Israel and Gaza are available, so why not via public mapping tools?
Read more

The Myth of the Moderate Democrats | Opinion

What cannot be accomplished in a day will be pushed by Democrats for weeks, months and years.
Read more

A woman who said she was R. Kelly's girlfriend for five years took the stand Monday to testify about how she went to audition for him as a 17-year-old high schooler who dreamed of becoming an R&B recording artist, only to be sexually abused by the singer.
Read more

HSBC Holdings Plc is giving some of its French staff two options to work from home part-time, joining peers in adapting its working week after the Covid-19 pandemic.
Read more

Jalen Brunson scored 26 and Tim Hardaway Jr. added 24 for the Mavericks, who fell to 19-17.
Read more

The U.S. shouldn't worry excessively about high inflation and the rising costs of products because they will settle within a year, the chief economist at Moody's Analytics ...
Read more

Where Hillary Clinton stands on education

The filmmaker known for his exhaustive documentaries on American subjects gives Scott Pelley a glimpse into how his films are made, the message he wants to convey with them and how he became the person he is today.
Read more

In Miami, hundreds of Cubans who fled the Castro regime came out into the streets to celebrate his death. David Begnaud spoke to one woman who said she was "happy that the devil finally went home."
Read more

His political satire spared no side and revolutionised how stand-up comedy is now performed.
Read more

It is the latest such move as soaring prices threaten to destabilise the post-pandemic recovery.
Read more

Critical Role campaign 3 predictions: when will it start...

Jackson students forced to use portable restrooms amid city’s...

People in Jackson, Mississippi, hope federal funding from the recently passed bipartisan spending bill and the Build Back Better bill will lead to access to clean water.
Read more

With Build Back Better, Dems aim to correct messaging...

House Democrats acknowledge they weren't very effective at selling their $1.9 trillion COVID-19 relief plan to the general public. Now, they're hoping to improve on those mistakes with their mammoth climate and social spe...
Read more

Long Covid: Teenager was so ill she thought she...

Liliana Jackson, who's 16 years old, suffered from skin rashes, nerve pain, chest cramps and severe fatigue and at one point thought she might die, but felt let down by doctors.
Read more

What time is Rick and Morty season 5 episode...

Here's when you can watch Rick and Morty season 5 episode 3 where you are this weekend.
Read more

Google's Senior Vice President for Android may have just confirmed this flagship feature for the Pixel 6 lineup.
Read more

Is Jake Paul Actually a Jerk, or Does He...

After getting famous on Vine and YouTube, the 24-year-old says he’s giving up influencing for the boxing ring.
Read more

The 58-year-old is described as a "predatory paedophile" by a judge, who also praised Albert Bremner's victims.
Read more

Six Argentina players and two members of team staff are expelled from the Rugby Championship for breaching tournament health rules by taking an unauthorised trip to Byron Bay.
Read more

Sydney Airport will open its books to a group of suitors after they sweetened their takeover offer to A$23.6 billion ($17.4 billion).
Read more

DNA storage is the most important innovation you’ve never...

DNA storage could solve the looming data crisis, but time is fast running out.
Read more

Petition calls for NJ school board members to resign...

A new petition is calling on New Jersey school board members to resign after they voted to remove holidays from the official school calendar on Thursday.
Read more

Ukraine's ousted president Viktor Yanukovych emerged in Russia for his first public appearance since leaving his country. Margaret Brennan reports from the State Department, where officials are warning the Russians to let the Ukrainians decide their own fate.
Read more

Creating simple narrated videos with Wondershare DemoCreator is one of the best ways to enhance your team’s productivity, your ability to teach effectively, your ability to network and grow your audience, and more.
Read more

Boris Johnson says he is "very concerned" about the deception used to get an interview with the princess.
Read more

New Zealand Member of Parliament Julie Anne Genter got on her bicycle on Sunday while in labor and headed to the hospital.
Read more

Whether etched on tiny trophies or scrawled in crayon and marker, a lot of kids will declare their dad the World's Greatest this Father's Day. But when eight-year-old Logan Rosati makes the claim, you can't help but believe her. Steve Hartman reports.
Read more

Krafton has announced in a recent Anti-Cheat Notice that the company has banned 336,736 BGMI accounts for using illegal programs.
Read more

Paul Donachie, 42, was hit by a silver Skoda Octavia on the A79 Prestwick Loop Road on Friday night
Read more

Green Party candidate Jill Stein did not qualify for the presidential debate. Stein joins CBSN's Josh Elliott to discuss her platform and how she feels about not being included in the debate.
Read more

The amazing vacation homes you can buy for $1...

Property prices are on the rise in many parts of the world. But there are still bargains to be had. Here are a few of the lovely vacation homes on the market in some of the world's most popular travel destinations right now.
Read more

Scenes from Week 2 of the R. Kelly sex-trafficking...

The second week of the R. Kelly sex-trafficking trial in New York City proved to be an exercise by the government in trying to paint the “I Believe I Can Fly” R&B star as a man-child control freak
Read more

Just nine overs are bowled on the third day at Taunton as weather again badly affects the match between Somerset and Surrey.
Read more

Fordham University professor Nicholas Tampio blasted the Biden administration in a new USA Today op-ed, claiming there was no proof of dangerous threats to justify the Justice Department getting involved in monitoring concerned parents at local school board m…
Read more

The Memo: Biden bets ‘big government’ is back

When President Biden delivers a joint address to Congress on Wednesday evening, he won’t just be advocating specific policies. He’ll be making the case that Americans want bigger government.The Biden bet is that the public has warmed to the idea of...
Read more

Loved ones struggle with why New Mexico friends were...

Jennifer Lannon loved her children, though she lost custody of them because of her struggle with prescription drug use
Read more

Schumer in bind over fight to overhaul elections

Senate Majority Leader Charles Schumer (D-N.Y.) faces big headaches in his own party as he tries to get a sweeping elections bill to President Biden's desk.Schumer - who is up for reelection in 2...
Read more

Texas Republicans advanced two elections bills this weekend in a special session, as they work to pass sweeping legislation that would impose a number of restrictions at the ballot box.Members of...
Read more

New York (AP) -- Thanks to the pandemic, the 2020 Met Gala and its fashion parade was pushed from its traditional May berth and morphed this year into a two-part affair that kicks off Monday night with a mini version of the celebrity-splashed fundraiser.
Read more

BUSTOS’ EXIT AND THE REMAP — DUCKWORTH’S DUCKS IN...

Presented by Illini for Affordable Rx Happy Monday, Illinois. That Food and Wine magazine would rank New Jersey's pizza No. 1 is a complete...
Read more

Prince Sultan Air Base, some 70 miles southeast of Riyadh, has hosted several thousand U.S. troops since a 2019 missile-and-drone attack on the heart of the kingdom’s oil production.
Read more

Facebook is seeking Federal Trade Commission (FTC) Chair Lina Khan's recusal from participating in decisions about how the agency proceeds with its antitrust case against the social media giant, according to a petit...
Read more

President Xi Jinping will give a high profile speech Tuesday at the Boao Forum on Asia, an opportunity for him to showcase China’s dramatic recovery from the pandemic and plans to open up the economy further to foreign investors.
Read more

'A tremendous sea change': Democrats see a path to remaking the Senate...

City bracing for over 30,000 Saint Patrick's Day tourists despite pandemic