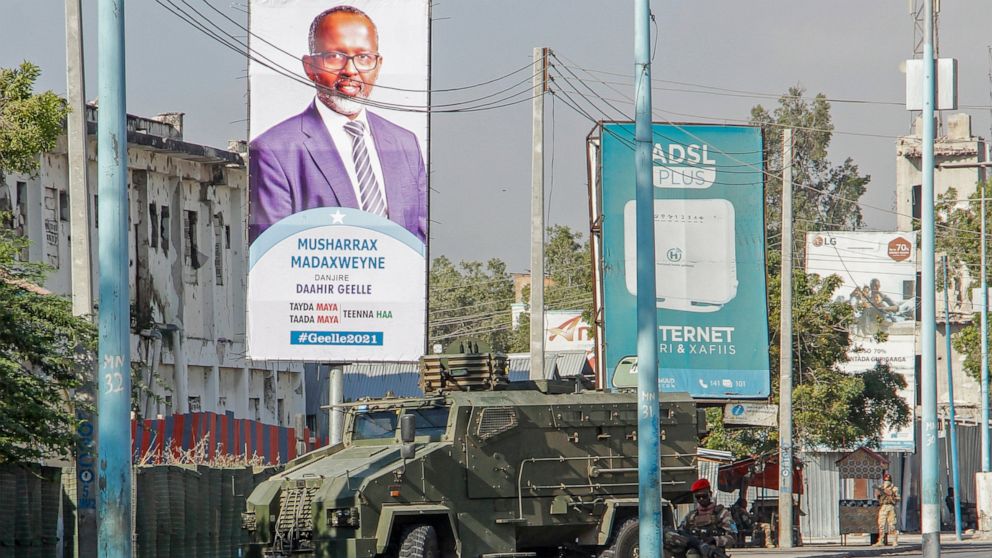 UNITED NATIONS — The U.N. Security Council urged Somalias government on Friday to organize elections without delay in a resolution that stressed the pressing threat to the countrys security from al-Shabab and armed opposition groups.

The resolution, which was adopted unanimously, authorized the African Union to maintain its nearly 20,000-strong force in Somalia until the end of the year with a mandate to reduce the threat from the extremist groups to enable a stable, federal, sovereign and united Somalia.

The U.N.s most powerful body said its objective is to transfer security to Somali authorities, with the aim of Somalia taking the lead in 2021, and achieving full responsibility by the end of 2023.

It emphasizes the importance of building the capacity of Somali forces and institutions so they are able to manage current and future threats, and authorizes the AU force, known as AMISOM, to support the transfer of its security responsibilities to the government.

The resolutions adoption came amid growing pressure on Somalia’s President Mohamed Abdullahi Mohamed after scheduled elections on Feb. 8 failed to take place because of the lack of agreement on how the vote should be carried out. Two regional states have said they would not take part without a deal.

Critics accuse Mohamed, who is seeking a second four-year term, of delaying the election to extend his current mandate. The president has blamed unnamed foreign interventions.

The Security Council expressed concern at the delays in finalizing arrangements for elections this year. It urged the federal government and regional states to organize free, fair, credible and inclusive elections in line with a Sept. 17, 2020, agreement.

Three decades of chaos, from warlords to al-Qaida affiliate al-Shabab to the emergence of an Islamic State-linked group, have ripped apart the country that only in the past few years has begun to find its footing.

The Security Council welcomed progress achieved so far but also stressed the immediate threat from al-Shabab and other extremist groups. It condemned their attacks in Somalia and beyond in the strongest possible terms.

Council members welcomed the governments commitment to conduct joint operations with AMISOM in order to become the primary security provide in Somalia.

But they said Somalia is not yet in a position to take full responsibility for its own security and that degrading al-Shabab and armed opposition groups and building and sustaining peace will therefore require continued regional and international collaboration and support.

While the British-drafted resolution was adopted unanimously, the councils three African members — Niger, Tunisia and Kenya — and Saint Vincent and the Grenadines objected to the way negotiations were conducted, saying they werent properly consulted.

Nigers U.N. Ambassador Abdou Abarry said the African Union must play a leadership role in determining the future of its mission to Somalia throughout the transition.

It is our sincere hope that the implementation of this resolution will be marked by meaningful participation, cooperation and collaboration between the council, the AU and other partners in the common endeavor to stabilize Somalia by systematically degrading terrorist groups to allow peace and security to the people of Somalia, Abarry said.

Grisham: Time in Trump administration ‘will follow me forever’

There has been a dip in vaccine hesitancy among Fox News viewers since leading hosts at the network have begun pushing inoculation in recent weeks, according to a new poll.A Morning Consult poll ...
Read more

U.S. to reduce use of private prisons

The Department of Justice has announced its plans to phase out the use of private prisons in the United States. CBS News justice reporter Paula Reid joins CBSN with more details.
Read more

The actor, who played Gunther in the series, was diagnosed in 2018.
Read more

"Reaching 50% higher carbon dioxide than preindustrial is really setting a new benchmark and not in a good way," one climate scientist said.
Read more

Zoom will start showing ads to users on the video conferencing platforms' free model as part of a new pilot program, the company said Monday.For the initial pilot program, ads will only be shown on the...
Read more

Biden to GOP governors threatening to sue over vaccine...

A fantastic deal, you can get the latest model Apple iPad on sale for a record-low price of $299 at Amazon.
Read more

Is OnlyFans Down? Website Back Up After Previously Not...

Hundred of people reported the site being offline on Monday night.
Read more

The station played the track at breakfast time "when children were particularly likely" to hear it.
Read more

Russia’s dominant Kremlin-backed party appears set to retain the two-thirds majority in the parliament that allows it to change the constitution, according to preliminary results on Monday morning
Read more

England make strides towards a first-Test fightback on an entertaining second day against New Zealand at Lord's.
Read more

Donald Trump is slamming Hillary Clinton over her email controversy, while the Democratic candidate is snapping back, saying the billionaire businessman is "temperamentally unfit" to be president. Democratic strategist Lis Smith and Republican strategist Lesl…
Read more

The White House briefing room is at full capacity for the first time in more than a year.
Read more

Save on holiday gifts from Amazon, It Cosmetics and more
Read more

While some commenters called the woman's complaints "ableist" and "bigoted," others speculated there was more to the story of the kids' behavior.
Read more

England's Ollie Pope misses out on a second career Test century, chopping onto his own stumps from Shardul Thakur on 81 during the fourth Test at the Oval.
Read more

Hello. Today we look at Omicron’s threat to the global recovery, what to watch in the week ahead and how entrepreneurship opportunities are limited to a small group of men.
Read more

How Effective Are Cloth Masks?

The developers of Far Cry 6 are aiming to have the game looking its best on both last and current-gen consoles.
Read more

Rattlesnakes have evolved a clever method of convincing humans that danger is closer than you think.
Read more

Of the 12 children diagnosed with COVID-19 currently in the intensive care unit, 10 are on ventilators, according to Mississippi State Health Officer Dr. Thomas Dobbs.
Read more

Florida has been a national epicenter for the virus's spread this summer.
Read more

The British Prime Minister outlined a 12-point Brexit plan Tuesday. PM Theresa May said the U.K. is leaving the European Union -- will not be leaving Europe. CBS News' Ryan Chilcote joins CBSN with the latest from London.
Read more

Fresh leak hints at how AMD vs Nvidia next-gen...

Who might win the next-gen GPU war? And what basis will that war be fought on, maybe more to the point...
Read more

Citigroup Inc. more than doubled its Asian and European natural gas forecasts for next quarter and said prices could surge to as high as $100 per million British thermal units in the event of a particularly cold winter.
Read more

Samsung Galaxy Buds Pro wireless earbuds are getting some...

The Galaxy Buds Pro are about to get even better thanks to a firmware update.
Read more

Ex-cops face charges in rough arrest of woman with...

The number of fuel stations in London and the Southeast that are dry increased, showing that efforts to end the regions shortages may...
Read more

Israeli Prime Minister Benjamin Netanyahu condemned Hamas on Monday following dozens of rocket attacks into Israel that set off air raids as far away as Jerusalem as violence continues to escalate in and around the holy c...
Read more

Jack Grealish on being in England squad at Euro...

Jack Grealish says "this is what I've wanted my whole life" as he prepares for his first major tournament with England at Euro 2020.
Read more

A union calls a return to normal hours a health risk, but the government says it takes safety seriously.
Read more

The country is responsible for 27% of global greenhouse gas emissions, according to a new report.
Read more

The Imou A1 is a mains-powered home security camera that can be panned and tilted remotely, enabling you to get a view of an entire room, even when you’re not home. How does it compare to rivals from Arlo and Ring?
Read more

The NBA has signed a new deal to bring two preseason games to Abu Dhabi in 2022, marking the first time the league will play in the Persian Gulf, ...
Read more

Fire breaks out near Place de L’Opera in Paris

A large fire broke out in a building on boulevard des Capucines, near the Place de L'Opera square in central Paris on Saturday, sending clouds of smoke rising into the air.
Read more

Cuomo impeachment inquiry: How an investigation and trial would...

How the process to impeach Gov. Andrew Cuomo would unfold in New York.
Read more

Ministers agree with most of England's planned changes, but are undecided on post-arrival tests.
Read more

This Coffee Brewer Uses a Vacuum to Make a...

This innovative brewer uses a vacuum pump to filter your coffee, resulting in a cleaner, less bitter cup.
Read more

A lieutenant colonel in the U.S. Space Force who was relieved of his command told Fox News on Monday he is being "misportrayed" online in regards to the comments about Marxism he made on a podcast earlier this month – and that he has received a private outpou…
Read more

Stephanie Grisham Warns Trump Would Focus on Revenge if...

"I believe if he is elected again, it will be a really scary time," said the former White House press secretary about Donald Trump.
Read more

The United Kingdom’s Defense Ministry apologized on Tuesday after mistakenly releasing the email addresses of 250 Afghan interpreters—some of whom have been in hiding since the Western withdrawal from Afghanistan, according to a report.
Read more

For Whom Should America Fight a Nuclear War?

Revisiting Orwell's work on the anniversary of the barnyard classic. The post ‘Animal Farm’ Turns 75 appeared first on The American Conservative.
Read more

Loki is expected to appear in Doctor Strange in...

Loki could appear in the upcoming MCU film Doctor Strange in the Multiverse of Madness, according to a new report.
Read more

Former Sen. Barbara Boxer (D-Calif.) was attacked in Oakland, Calif. on Monday but not seriously injured, according to a statement on her official Twitter account.Boxer, 80, was allegedly pushed ...
Read more

Israel opens its pavilion with big bash at Dubai’s...

England beat Denmark 2-1 to reach the final of Euro 2020 - and here's how the match unfolded on social media.
Read more

We've got the winners of the Phones, Camera and Retail categories at the TechRadar Choice Awards 2021.
Read more

Former U.S. President Bill Clinton will remain overnight in a Southern California hospital following a urological infection, but he has continued to make "excellent progress" and is expected to be discharged on Sunday, his spokesman said in a statement on Sat…
Read more

Rest and Be Thankful fully opens for 48-hour trial

The stretch of the A83 in Argyll has been closed or partially closed since a landslip last August.
Read more

Welcome to our weekly newsletter — a fresh, global perspective on the stories that matter for Australian business and politics. This week: Why Qantas is flying high even with our international border closed, and finding buried treasure in the unlikeliest of p…
Read more

The Friends reunion has been filmed in Los Angeles:...

The Friends cast reunited after almost 17 years last week. Here's all we know about the one-off show.
Read more

Isabella Kalua has been missing for more than a week, according to Honolulu police.
Read more

Zack Snyder has revealed his plans for two abandoned Justice League sequels, including one where Superman's son becomes the new Batman.
Read more

How Infrastructure as Code can automate and scale security