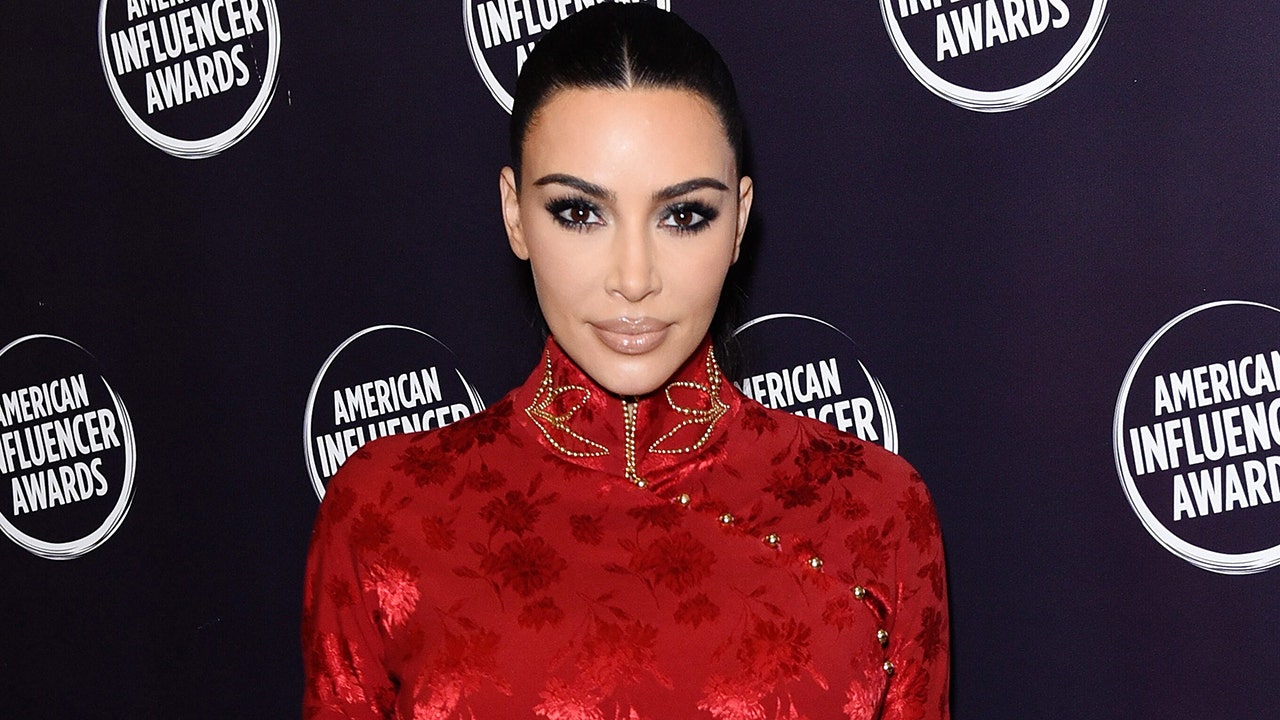 Kim Kardashian is soaking up some sun — and dishing out advice to her 209 million social media followers.

On Friday, the “Keeping Up with the Kardashians” star, 40, took to Instagram to share a carousel of bikini pics.

The series of pictures see a sun-kissed Kardashian posing in a low-cut olive green bikini paired with chic sunglasses and a simple necklace.

“Zone out and focus on you,” Kardashian wrote in the caption.

Kim Kardashian dished out the advice to her 209 million followers on Friday.

The post received nearly 4 million likes in the process.

“Gorgeous as always! [heart emojis],” one fan wrote. “Kimmy you been actin up,” another user said.

Kim Kardashian filed for divorce from Kanye West in February after nearly seven years of marriage.

Kardashian’s advice to her fans comes just one month after the Skims mogul filed for divorce from her husband, Kanye West, after nearly seven years of marriage.

According to legal documents obtained by TMZ, the reality TV queen is asking for joint legal and physical custody of the couple’s four kids: North, 7, Saint, 5, Chicago, 3, and Psalm, 1.

West, 43, is reportedly not objecting.

Reports of reasoning for the divorce have varied, with sources previously claiming that their politics, lifestyle, Calabasas home and even the rapper’s surprisingly brief attendance at her lavish birthday party last year have all been points of contention.

Europe’s IPO market roars back to life but where...

European stock market listings have come back with a bang after the summer lull but blank cheque firms are nowhere to be seen.
Read more

Your Weekend Reading: The Cryptocurrency Craze Gets Even Crazier

What is going on between Israel and the Palestinians?

The BBC's Ros Atkins looks at the reasons behind the increased hostilities in the region.
Read more

“Promising Young Woman” and “Judas and the Black Messiah,” were among the early winners at the Academy Awards, kicking off an Oscars show pared down for a dystopian year marked by pandemic, social unrest and political turmoil.
Read more

PGA Championship 2021: Who Made the Weekend Cut? Saturday...

Phil Mickelson versus Brooks Koepka showdown looming this weekend, and the Masters champion is in the hunt as well.
Read more

Max and Keira's Law presumes all adults in England as potential organ donors unless they opt out.
Read more

Under Armour to Pay $9 Million to Settle SEC...

Under Armour Inc. will pay $9 million to settle a U.S. regulator’s allegations that the sports apparel company booked revenues earlier than it should have because it was at risk of missing analyst estimates.
Read more

Sen. Bill Hagerty (R-Tenn.) and other conservative detractors of the bipartisan deal have no leeway to stop it from passing, only to delay it.
Read more

Biden traveling to Georgia to mark 100 days in...

President Biden and first lady Jill Biden will travel to Atlanta, Ga., on his 100th day in office on April 29.The president will participate in a car rally and highlight his accomplishments within the first 100 day...
Read more

BOE Said to Drop Policy on Staff Returning to...

The Bank of England has reversed a policy encouraging staff to return to the office at least one day a week, a person familiar with the matter said.
Read more

A better recognition for the young woman who filmed the killing of George Floyd would have been inclusion in an existing category, or the creation of or call for a new category honoring citizen journalism, writes Mikki Kendall. The citation does not change th…
Read more

The Siege of Sarajevo lasted for years — now...

In the hills above Sarajevo, thousands of uniform white headstones line the slopes, marking the graves of just some of the victims of the Bosnian War.
Read more

Gunman who killed agent on Amtrak train in Arizona...

Morgan Stanley (MS.N) has become the talk of the town in Mumbai financial circles. The investment bank run by James Gorman decided not to pitch for a role on what is set to be India’s bigges…
Read more

OmniFoods, the Hong Kong startup best known for its fake pork product "OmniPork," said in an announcement on World Oceans Day that it's jumping on what it sees as the next phenomenon: plant-based seafood.
Read more

Volunteers of TOUCH Outreach in Minneapolis take to the streets nightly to stop violence in the city before it starts. Jennifer Mayerle shares their story.
Read more

The situation was made worse when the man with the skateboard "began doing hand gestures as if he was shooting into the crowd" in response to the panic.
Read more

‘It could’ve been worse’: Utah governor wrestles with Covid...

Gov. Spencer Cox didn’t support Donald Trump in 2016. While he backed Trump in the 2020 Republican primary, he didn’t vote for the president or Joe Biden in the general election.
Read more

The new Microsoft Surface Pro X with Windows 11 might be set for a September 22 reveal if new a Energy Star certification is any indication.
Read more

Sunny and windy weather led to a surge in renewable sources of energy, the operator says.
Read more

The President of the US tech giant told the BBC that the shortage could last another two years.
Read more

Eviction ban on firms behind on rent is extended...

All short-term lets in Scotland may need to be licenced by local councils under new legislation.
Read more

Almost everyone on the planet outside of Cleveland's crack marketing and branding executives seems to loathe the new name.
Read more

Just 36% of Americans say the war was worth fighting; 77% support withdrawal.
Read more

Inflation will hurt low-income Americans for years to come

Lower-income families and retirees on fixed incomes will especially feel their buying power erode -- not just in the short-term, but for many years to come, further widening the nation's wealth gap.
Read more

Among the Oscar winners: 2 foundations that serve the...

Two foundations that serve the needy achieved the kind of spotlight at the Academy Awards telecast that any nonprofit yearns for: A shout-out from a famous celebrity to the 10 million or more people estimated to be watching from home
Read more

One of Wales' largest councils face disruption due to the number of drivers and helpers isolating.
Read more

Rick and Morty season 5 episode 7 doesn't hit the mark. Here are our detailed thoughts on the new episode.
Read more

Japan on Thursday marks the 10th anniversary of a massive earthquake, tsunami and nuclear disaster along its northeastern coast
Read more

The Biden administration's first major move on Cuba is the strongest signal yet it has little appetite to reverse Trump-era policies toward the island nation.The State Department this past week l...
Read more

Liz Chicaje, who fought for the creation of Yaguas National Park, has been awarded the Goldman prize.
Read more

Joe Biden Told Putin He Had No ‘Soul’ During...

The then-VP claimed he looked into Putin's eyes and told him, "I don't think you have a soul" during their handshake at the Kremlin in 2011.
Read more

A friend of the former WWE star, who was known as 'Super Genie' in the ring, confirmed her death in a Facebook post on Wednesday.
Read more

Uefa opens disciplinary proceedings into events surrounding the Euro 2020 final, including the actions of England fans inside and around Wembley.
Read more

Pentagon chief to press for Manchin’s support on key...

U.S. Steel says a northwest Indiana plant’s discharge of elevated levels of iron were the cause of an orange plume that entered a Lake Michigan tributary, prompting the closure of several nearby beaches and a water treatment facility
Read more

Can the Chinese manufacturer come up trumps with the successor to the F7?
Read more

Legendary motor racing commentator, who became as famous as the drivers themselves, dies at 97
Read more

Frank Smith, from Nottingham, has not returned from a planned walk up 1,126m Ben Cruachan.
Read more

"Public polls are only as accurate as the people doing them, the methodology they use and all that stuff," said Senator Marco Rubio.
Read more

Delta fears grip economy as cases jump across the...

The delta variant of the coronavirus is sweeping through the United States, raising the average number of cases to 30,000-per-day, crowding hospitals in areas with large number of unvaccinated people and spurring question...
Read more

New infrastructure funding to expand access to transit for...

The provision was spearheaded by Senator Tammy Duckworth, a double amputee who cannot use subway stations that don't have a working elevator.
Read more

Scotland’s papers: ‘How many more?’ and vaccine app ‘farce’

Ukraine's foreign ministry said Saturday that Russia briefly detained one of its diplomats in St Petersburg, marking the latest instance of tension between the two countries.According to ...
Read more

A record-breaking heatwave is surging throughout the Pacific Northwest of the U.S., ...
Read more

A durable 5G smartphone with a difference and a surprising price tag.
Read more

Did Lizzie Borden really hack her parents to death? A surprising answer and an inside look at the haunting crime scene. "48 Hours" correspondent Erin Moriarty reports.
Read more

Virgin Media O2 CEO outlines vision to be the...

Virgin Media O2 merger has come at the 'perfect time' as connectivity is viewed as more than a commodity, says Lutz Schüler.
Read more

One in Eight EU Employees Worked From Home Last...

"Justice would bring our son home to us," Katie Wright said.
Read more

Presented by Uber Driver Stories GOOD MORNING, MASSACHUSETTS. Soak up some sunshine! THE NUMBERS ARE IN Burn rates are rising among Bostons mayoral candidates, but...
Read more

In Israel, Miss Universe says pageant no place for...

Tucker Carlson swats back at 'woke generals' after criticism