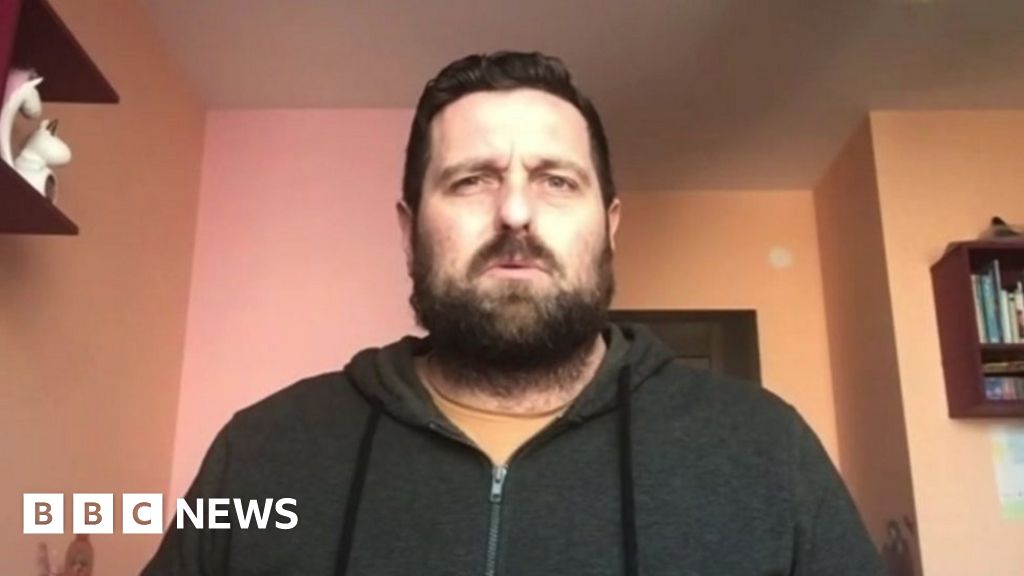 Image caption, Mr Baker said he was relieved to have made it out of Ukraine

A British man who fled Kyiv with his wife and step-daughter amid fears for their safety has spoken of his relief after arriving in Poland.

Dan Baker, a teacher from Brighton, told the BBC he left after hearing stories of attacks on Ukrainian troops’ wives and daughters.

The family joined a 12.5km convoy and spent four days on the road before crossing the border.

“Now we have arrived in the European Union, exhaustion has set in,” he said.

Mr Baker, his Ukrainian wife, Victoria, and their 12-year-old daughter have been living in Kyiv for five years.

They had been determined to stay but fled after he said the “balance of safety” for his family had changed.

After his arrival in Poland, he told BBC South East Today he felt as though the “world has been taken off” his shoulders.

He said there was “a feeling of relief” and that “exhaustion had set in” as the adrenalin was no longer there.

“Now we are trying to do normal daily things, for [our daughter] Veronica, to make it normal,” he said. ‘Outlander”s Christie Family On Their Characters: ‘We Are Not...

Samsung in Talks to Hike Chipmaking Prices by Up...

Dubai airport passenger traffic up in 2021 but still...

Hundreds participate in Granny Basketball League for women over...

Don Young, dean of the House, dies at 88

The new era of American aerospace

Aneera Kabeer: The Indian trans woman whose plea to...

SPACs Emerge as Safety Play for Creditors Wary of...

Police arrive at Canada-US border where truckers are protesting

Will the Nvidia RTX 4080 be a disappointing upgrade?

Tottenham 5-1 Newcastle: Has Harry Kane been given a...

On The Money — Fed puts strict limits on...

Ant and Dec in drag: ‘This will change LGBTQ+...

Economist: Loss of Ukraine’s exports may be felt worldwide...

Dan Bongino: Why the media and the left are...