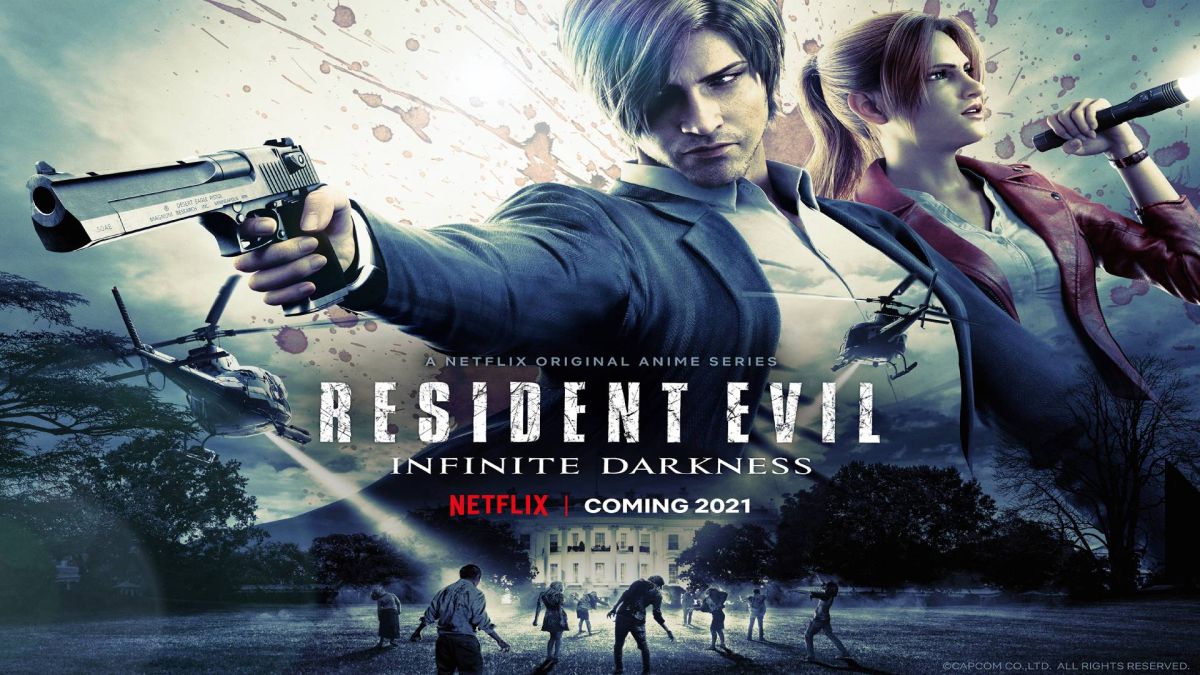 Netflix has revealed in a tweet who will be playing the roles of Leon S. Kennedy and Claire Redfield in Resident Evil: Infinite Darkness, the animated series coming to the streaming platform in 2021, and the casting is sure to make fans of the Resident Evil 2 remake happy.

Nick Apostolides and Stephanie Panisello will be reprising the roles of Leon and Claire respectively, after voicing the characters in 2019s Resident Evil 2 remake. The announcement was accompanied by a new promotional image, in which it looks like a horde of zombies are attacking the White House.

Even in darkness, a familiar voice can make all the difference. pic.twitter.com/86LrMsbskYMarch 12, 2021

Fans arent the only ones excited about the Resident Evil: Infinite Darkness casting, though, as Stephanie Panisello herself tweeted out her excitement at reprising the role of Claire Redfield.

Its definitely nice to see Resident Evil: Infinite Darkness employ this bit of continuity with its new voice actors for Claire and Leon. Over the course of the Resident Evil series, numerous characters have seen their voices cast and recast with very little consistency between entries, so sticking with familiar voices for the Netflix series is a definite plus in our book.

With multiple Resident Evil projects currently in the works, from Infinite Darkness to Resident Evil Village and the upcoming feature film, it certainly looks like Resident Evil fans are going to have a busy 2021 ahead of them. Holding out for the Animal Crossing Nintendo Switch this Black Friday, yes, yes?

Mo Salah might be the best Premier League player...

Still only 29, he's one of the two greatest Premier League players of all-time, yet is Mohamed Salah still undervalued?
Read more

The old foe aiming to help Wilder win against...

From being knocked out by him in 2014, Malik Scott is now helping Deontay Wilder try to regain his WBC world heavyweight title.
Read more

Why flexibility and safety is the future of work

By creating a hybrid work environment, employees are empowered with the flexibility to choose.
Read more

The series is likely to include three models - Vivo X70, Vivo X70 Pro, and Vivo X70 Pro Plus and the company could also be launching smartwatches and a tablet.
Read more

The magic is calling all Foodies to the Walt Disney World Resort 50th anniversary celebration – The World’s Most Magical Celebration! Throughout our four theme parks and beyond, Disney chefs and mixologists have created more than 150 sips and bites full of co…
Read more

Iraqi air base hosting US troops targeted in drone...

An Iraqi air base that hosts U.S. troops was the target of a drone attack early Saturday, though no injuries or deaths were reported. A spokesperson for the U.S.-led coalition in Iraq ...
Read more

An Illinois man died this month in the state's first human case of rabies since the 1950s, according to health officials on Tuesday.
Read more

The wife of the late Robert F
Read more

U.S. Surgeon General Dr. Vivek Murthy joins Major Garret on "The Takeout" podcast to discuss the state of the COVID-19 pandemic, whether children need to wear masks as they return to school, the concerns around misinformation and other health issues facing Am…
Read more

PayPal is raising merchant fees between UK and Europe

The new fee structure will come into effect from November in a move to streamline payment processing options.
Read more

Dave Smith, 72, from Bristol, was sent to hospital seven times over the last 10 months.
Read more

China has punished a slew of officials for failing to curb a Covid-19 outbreak that’s spawned nearly 900 symptomatic infections across the country in less than a month, a resurgence that complicates Beijing’s strategy of keeping the virus out entirely.
Read more

The upcoming House vote on the $1.2 trillion bipartisan infrastructure bill, as well as the Biden administration's handling of thousands of Haitian migrants gathered at the Southern border, are expected to be the fo...
Read more

Biden emphasizes that Afghan refugees will be vetted before...

President Biden emphasized on Sunday that refugees who are being evacuated from Afghanistan will be thoroughly vetted before they are brought to the United States.Biden's comments, which he ma...
Read more

New York Gov. Andrew Cuomo announced Tuesday he had signed an executive order declaring a gun violence emergency and told an audience in New York City he was going to sign legislation that allows for civil lawsuits against gun manufacturers, distributors and …
Read more

Juventus sack Andrea Pirlo as manager after he spent just one season in charge of the Italian club.
Read more

The morning after his country's largest election in history, Mexican President Andrés Manuel López Obrador held his daily press conference, where he usually talks about his policies and answers questions from the media.
Read more

President Biden accused Republicans of offering “fear and lies and broken promises” during remarks at a virtual Democratic National Committee event Monday evening, even as he touted a bipartisan infrastructure deal making its way through the Senate.
Read more

Biden reflects on ‘diminished’ GOP at NATO in wake...

President Biden on Monday said some foreign leaders he's met with in recent days have been "shocked" by the fallout over former President Trump's time in office and, in particular, the Jan. 6 Capitol riots while expressin...
Read more

Jay-Z, Foo Fighters, Tina Turner And More Will Be...

President Joe Biden gave Pope Francis a deeply personal challenge coin during his trip to the Vatican on Friday, marking the gift with a moment of light-heartedness that nods to a long tradition in the US military.
Read more

‘Loki’ makes a new kind of mischief as Marvel’s...

The slow wind-up has characterized all three of Marvel's Disney+ series, but the pacing feels particularly sluggish — and the endgame, pardon the expression, elusive — watching the first two episodes of "Loki."
Read more

Primaries in two Ohio special House elections Tuesday served as stress tests for the state of the Republican and Democratic parties as their respective ideological and establishment flanks clashed.
Read more

Celebrity birthdays for the week of Sept. 19-24

Celebrities with birthdays during the week of Sept. 19-24 include actor and singer Will Smith, actor Catherine Zeta-Jones and singer Julio Iglesias
Read more

Statue of Confederate Robert E. Lee coming down in...

Crews are set to remove one of the largest remaining Confederate monuments.
Read more

There’s a growing number of money managers in green finance turning to markets not usually associated with sustainability.
Read more

Fourth of July Appetizers and Recipes for Easy Desserts

Chicken salad with a spicy kick and homemade peach crisp are some simple dishes that can be prepared for your Fourth of July gathering.
Read more

Rioting has continued in parts of South Africa, in unrest sparked by the imprisonment last week of ex-President Jacob Zuma that has spiraled into days of looting in two of the country’s nine provinces
Read more

Half of U.S. Hospitality Workers Won’t Return in Job...

More than half of U.S. hospitality workers wouldn’t go back to their old jobs and over a third aren’t even considering reentering the industry, according to a survey that underscores hiring challenges for restaurants, bars and hotels.
Read more

Some squatters in Spain demand cash before leaving - so eviction firms have arisen to handle the talks.
Read more

The world’s cheapest 5G smartphone can teach us a...

People who got mixed doses of coronavirus vaccines -- receiving a different vaccine type as a second dose than the first dose -- appear to be more likely to experience mild side effects such as fever, chills, fatigue or headache, researchers in the UK reporte…
Read more

Man Stumbles Upon Prehistoric Sea Turtle Fossil That Could...

The man was walking along a river when he made the amazing discovery, which experts estimate to be around 84 million years old.
Read more

The move follows approval from the Joint Committee on Vaccination and Immunisation (JCVI).
Read more

How to get AI to the edge

Pushing AI to the edge, instead of the reverse, is key for businesses to capitalize on 5G.
Read more

The BBC “fell short of high standards of integrity and transparency which are its hallmark" over journalist Martin Bashir's interview with Diana, Princess of Wales, inquiry says
Read more

Believe it or not, there’s a dog under this...

What IS that creature? A stray Shih Tzu needed a haircut so badly you could barely tell it was a dog. But post-shave, CNN's Jeanne Moos reports, a star is born.
Read more

President Biden took questions from reporters as he wrapped up his appearance at the U.N. climate summit known as COP26 in Glasgow, Scotland. He spoke about U.S. policies to address climate change, the role of Russia and China, and the challenges of getting h…
Read more

The Scottish Conservatives have set out plans to 'rebuild Scotland after the worst year'.
Read more

How bees and drones team up to find landmines

Drones are being used to track bees that have been trained to sense chemicals in landmines.
Read more

Dartmouth Colleges endowment returned 47% in the fiscal year that ended in June, the latest university to post some of the strongest investment...
Read more

Israel and South Korea have agreed to exchange coronavirus vaccine doses in a first-of-its-kind deal.Israel is giving around 700,000 Pfizer vaccine doses that are set to expire soon and might not...
Read more

Glock Inc. will “vigorously” defend itself against a “baseless” lawsuit brought by Mexico that accuses firearm manufacturers of contributing to gang violence, the company said Thursday, in reply to written questions.
Read more

The bill passed 413-12, despite earlier objections from some Republican lawmakers over the wording in the bill.
Read more

With oil market tight, OPEC+ decides how much more...

The U.S. Supreme Court term that starts Monday isn’t entirely about abortion. It only seems that way.
Read more

People are urged to play their part in keeping coronavirus at bay in the run-up to Christmas.
Read more

Minnesota AG says he ‘felt a little bad’ for...

Thousands of protesters on Saturday took to the streets of Sydney and other cities across Australia to push back on continued COVID-19 lockdown orders amid new record case surges in the country.
Read more

A new model of learning centers on blasts of neural activity that act as teaching signals—approximating an algorithm called backpropagation.
Read more

Team Green could have a fight on its hands at the start of 2022, if this leak is to be believed.
Read more

Susan Collins defends Romney, Cheney: ‘We are not a...

What’s with all the White House fence jumpers?

University of Pittsburgh accused of ‘lowering the cone of...

The University of Pittsburgh is facing sharp backlash after it announced a D.C.-based law firm would conduct a purportedly "independent" investigation of its fetal tissue practices.
Read more

Ahead of January 6, allies of then-President Trump had a "command center" at a hotel one block away from the White House where they discussed efforts to reverse his 2020 election defeat. Washington Post investigative reporter Jon Swaine joins CBSN's "Red & Bl…
Read more

Abdoulaye Doucoure: Everton midfielder out for up to 10 weeks