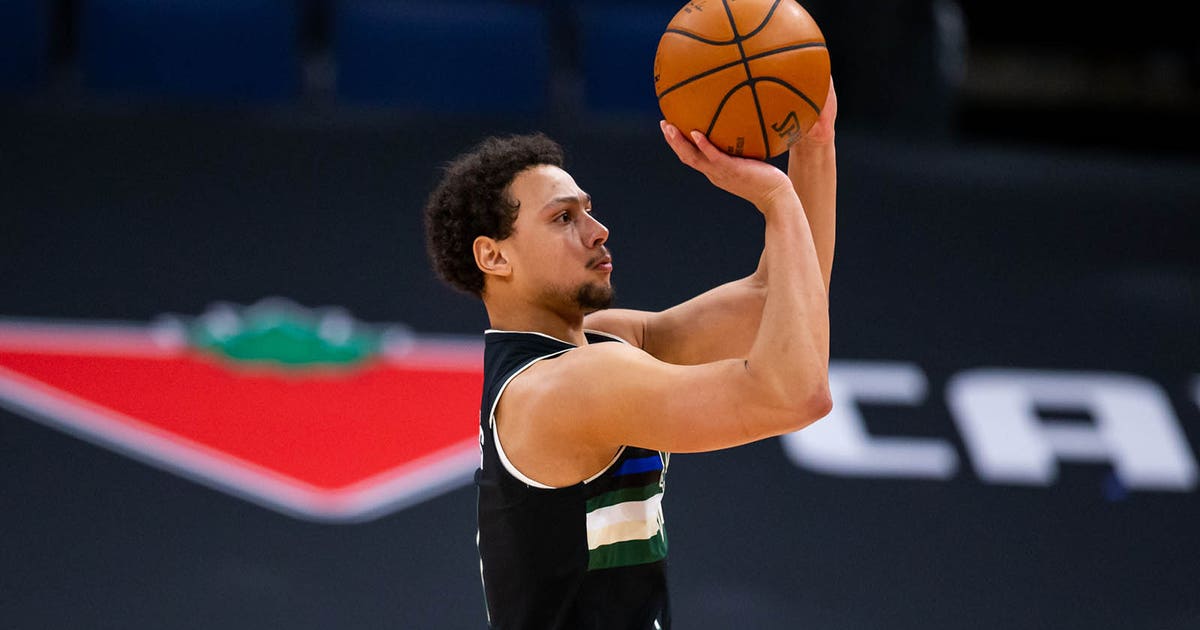 The Milwaukee Bucks knew they were getting a good shooter when they brought in Bryn Forbes.

Even the Bucks would likely admit Forbes has exceeded expectations.

On Thursday night in the Bucks win over the Knicks, Forbes sank 7-of-7 downtown shots. Earlier this year, Forbes made all six of his 3-point attempts in a victory at Cleveland.

Forbes is just the second NBA player to have two games making 6+ 3s with no misses, joining Steve Smith, who did it twice in a 13-day span for San Antonio in November 2001.

Can Forbes make it three in a season? If he does, not only will he be the first to accomplish that feat but also hed tie the most career games with 100% accuracy while making 6+ 3s in a game.

As it stands, Forbes is just one of 11 players with 2+ games being perfect from 3 with 6+ makes, joining the above-mentioned Bell, Perkins and Smith as well as Mike Bibby, Chauncey Billups, Caron Butler, Langston Galloway, Ben Gordon, Kyrie Irving, Chuck Person, Wesley Person and Mickael Pietrus.

The Bucks play next Saturday at Washington (at 6 p.m. on FOX Sports Wisconsin). For what its worth, the Wizards are fourth-to-last in the NBA in opponent 3-point percentage (38.4%).

iFast Corp., an online brokerage that’s been Singapore’s best-performing stock over the past year, is betting on China and a retail-trading frenzy to help it grow assets by more than fivefold by 2028.
Read more

Smart and sophisticated, the Bowers & Wilkins PX7 premium wireless noise-cancelers tussle for top spot with everything they’ve got.
Read more

Treat yourself to the huge Alienware AW3821DW gaming monitor...

A researcher at a Merck facility outside of Philadelphia found several vials that were labeled "smallpox," according to ...
Read more

Chicago (AP) -- The Houston Astros found themselves in familiar territory Monday, brushing aside comments by Chicago White Sox reliever Ryan Tepera after he implied they stole signs while winning the first two games of the AL Division Series in their ballpark.
Read more

The former BBC Breakfast host has said "the road has been a bit bumpy recently".
Read more

A 30-year-old man is due to appear at the city's sheriff court over the death of Lee Small on Wednesday.
Read more

The picture across Scotland with 48 seats declared after the end of the first day of counting.
Read more

A New Jersey woman who received a lung transplant 11 years ago and was recently vaccinated against the coronavirus died last month from a rare breakthrough case, according to a report.
Read more

The extent of the structural damage to the property had hampered a search for the occupant.
Read more

“Corrine Brown was entitled to the unanimous verdict of a jury of ordinary citizens,” the judge wrote.
Read more

Southwest says flights are more full and fares are...

A Colorado man charged in the 2015 deadly shooting of a Planned Parenthood clinic has been ruled incompetent to stand federal trial. U.S. District Judg...
Read more

Israel Argues Tower it Bombed Housing Reporters ‘Not a...

DOJ to review 9/11 records with eye toward making...

The disclosure follows longstanding criticism from relatives of those killed that the U.S. government was withholding crucial details from them in the name of national security.
Read more

Vaccines made in South Africa to stay in Africa,...

Vaccine doses produced by a plant in South Africa will no longer be exported to Europe after the intervention of South Africa’s government, the African Union’s COVID-19 vaccine envoy said Thursday
Read more

Presented by Pre-K Our Way Good Tuesday morning! There will be just one gubernatorial debate: Tonight at 7:00 on NJ 101.5. GOP gubernatorial candidate Hirsh Singh,...
Read more

The baby boy was found wrapped in a blanket by a passer-by in Kings Norton and taken to hospital.
Read more

Lucid Motors Inc., the Saudi-backed electric-vehicle startup waiting to go public via a blank-check company, remains on schedule to start production and deliveries of its debut electric vehicles this year.
Read more

Philippines Bans Non-Essential Travel Into and Out of Capital

Cambodia’s Prime Minister Hun Sen has ordered a strict stay-at-home two-week lockdown in the capital Phnom Penh starting Thursday to slow a surge in coronavirus cases, warning “we will die unless we act responsibly.”
Read more

The European Union is urging the United States and other wealthy countries to expand their vaccine exports as a more immediate solution to curbing new waves of COVID-19 across the globe. European Commi...
Read more

Four former employees of Swedish telecommunications giant Ericsson AB have been charged with bribery in a district court in Stockholm.
Read more

Police tasered a suspect who tried to push past airport security at LAX and the arrest was caught on camera. CBSN's Vladimir Duthiers shows passengers' video of the arrest.
Read more

German elections usher in political change with a small...

While voting patterns are changing, none of the front-running parties can be described as radical.
Read more

Taliban will not be able to access most Afghan...

Most of the country's financial reserves are held in the US where the Taliban will not be able to access them.
Read more

Federal regulators say Berkshire Hathaway’s $1.3 billion deal to buy a natural gas pipeline from Dominion Energy that fell apart this week should have never been attempted because a similar deal drew strong opposition in the past
Read more

US consumer prices surge in June by the most...

Prices for U.S. consumers jumped in June by the most in 13 years, signaling that a swift rebound in spending has run up against widespread supply shortages that have escalated the costs of many goods and services
Read more

Federal judge tells Capitol riot defendant what he did...

A federal judge in Washington, D.C. refuted the idea that a defendant was acting as a "patriot" when he stormed the Capitol on Jan. 6."You called yourself and everyone else patriots, but that's n...
Read more

Crystal Palace manager Roy Hodgson says his decision to leave the club at the end of the season is the right one and that he will leave the game for a while too.
Read more

A promise to his grandma & an unprecedented welcome...

Lukas Podolski is set for his competitive debut for boyhood club Gornik Zabrze and BBC Sport looks at how he is fulfilling a family promise.
Read more

Early menopause: ‘I was grieving that I couldn’t have...

From hot flushes on dates to feelings of grief, being menopausal at university was tough for Éimi.
Read more

A member of staff says the singer struck her, while Ms Spears' lawyer says no-one was injured.
Read more

Aston Martin Is Delivering Something Rare These Days: Good...

The company is on track to beat sales records for the year, and there is a plan to reach profitability.
Read more

Tax on landlords could pay for social care, says...

The Labour leader responds to the PM's plan to raise taxes to pay for the NHS and social care.
Read more

Barcelona boss Ronald Koeman was sent off late on as his side were held 0-0 by lowly Cadiz in La Liga.
Read more

The former president has not confirmed whether he'll run in 2024.
Read more

The man, who has not been named, was found near a picnic area in Dingwall on Sunday morning.
Read more

An "active shooter" has been reported at a King Soopers grocery store in Boulder, Colorado, police said.
Read more

Men are marched out of prison camps. Then corpses...

Witnesses say bodies found on the banks of a river in Sudan tell a dark story of a new phase of ethnic cleansing across the border in Ethiopia's war-torn Tigray region.
Read more

At least four Palestinian gunmen were killed in shootouts with Israeli security forces during a sweeping West Bank arrest operation cracking down on the Islamic militant group Hamas on Sunday, the Israeli military said.
Read more

EXPLAINER: Why US inflation is so high, and when...

How to watch Foundation online on Apple TV Plus...

The FBI warned Rudy Giuliani and Sen. Ron Johnson (R-Wisc.) that they were targets of a Russian attempt to meddle in November’s election, The Washington Post reported.
Read more

Biden asking for ‘9/11 style attack’ by not responding...

Former USS Cole Commander Kirk Lippold told "Your World" Joe Biden will embolden Vladimir Putin if he does not "clearly" respond to the Russian government for "state-sponsored" cyberattacks on American businesses.
Read more

Dylann Roof has lost the next phase of his appeal, with a federal court turning down his request for a new hearing to challenge his death sentence and conviction in the 2015 racist slayings of nine members of a Black South Carolina congregation
Read more

The Legend of Zelda: Skyward Sword HD for Nintendo...

A Wii classic is coming to Nintendo Switch when The Legend of Zelda: Skyward Sword HD arrives on July 16 - here's all we know about the upcoming remaster.
Read more

In August 1991, a group of hard-line Communist Party officials tried to remove Soviet leader Mikhail Gorbachev from power. The move sent shock waves around the world, which feared a rollback of Gorbachev’s reforms and his efforts to end the Cold War. The puts…
Read more

Alicia Keys and Swae Lee will bring the debut performance of their single 'Lala' to the 2021 MTV VMAs.
Read more

Scarlett Johansson Will Receive The Generation Award At The...

Scarlett Johansson will receive the Generation Award at the 2021 MTV Movie & TV Awards on Sunday, May 16.
Read more

The region of Barlovento in northern Venezuela used to be a perfect Caribbean holiday destination.
Read more

‘How the country is going to move’: Harris bids...

Health care rate-setting: too good to be true

Americans are increasingly frustrated by the high cost of health care. The temptation to buy into any snake-oil remedy to address the problem can be nearly overwhelming. In a handful of states, this has led to allowing the government to set the...
Read more