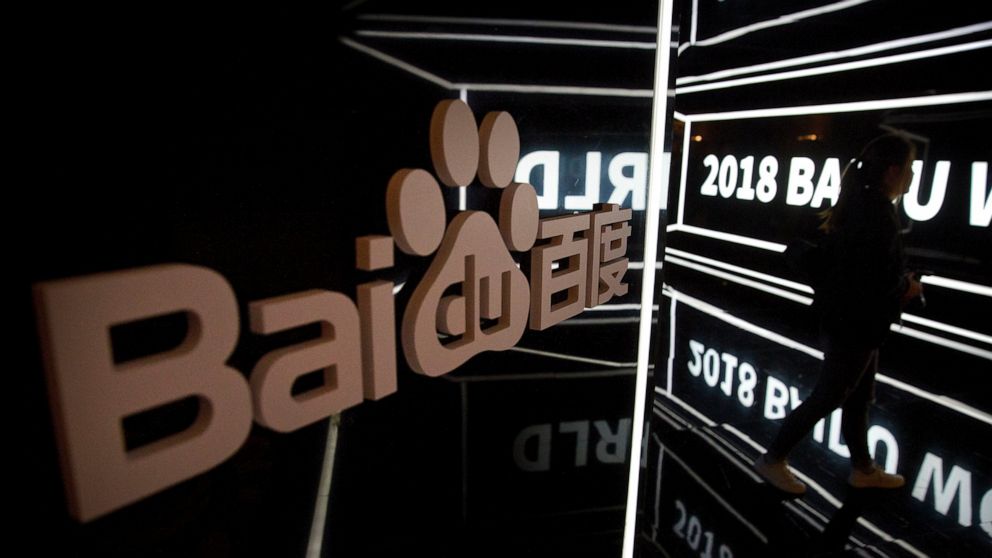 HONG KONG — Chinas market regulator said Friday that it fined a dozen companies, including games company Tencent Holdings and Chinese search engine firm Baidu Inc., for not disclosing past deals as authorities step up anti-monopoly scrutiny in the internet sector.

The companies, which included other firms such as ride-hailing company Didi Mobility and Softbank, were fined 500,000 yuan ($77,000) each for not disclosing previous investments, acquisitions or joint ventures, according to a statement by Chinas State Administration for Market Regulation.

China in February released anti-monopoly guidelines aimed at clamping down on anti-competitive practices in the internet industry, such as signing exclusive agreements with merchants and the use of subsidies to squeeze out competitors.

Tencent Holdings was fined over its investment in online education app Yuanfudao in 2018, while Baidu was fined for taking over consumer electronics firm Ainemo Inc. last year.

The regulator said that neither had sought prior approval for the deals, thereby violating the anti-monopoly laws even though the deals did not restrict competition.

Tencent said in an emailed statement that it would continue to adapt to changes in the regulatory environment, and will seek to ensure full compliance.

Similarly, Didi Mobility, a unit of Didi Chuxing, and Softbank were censured over not seeking approval before setting up a joint venture.

Baidu, Didi Mobility and Softbank did not immediately comment.

Internet companies in the United States face similar scrutiny. Legislators and regulators are looking at whether Facebook, Google and other companies improperly hamper competition in advertising and other areas.

President Joe Biden’s administration drew up a strategy to contain one coronavirus strain, then another showed up that’s much more contagious
Read more

CBS News poll: Will parents get their younger kids...

As Americans look toward winter, many would prefer traveling and going out where vaccination requirements are in place.
Read more

Gloucester's Matt Garvey, Jamie Gibson and Ollie Atkins leave the club at the end of their contracts.
Read more

CNN's Brian Stelter was mocked on Sunday for having conducted a softball interview with White House Press Secretary Jen Psaki, who is a former CNN contributor, in which his first question centered on what the media “get wrong” in their White House coverage.
Read more

The 20th anniversary of the 9/11 terror attacks provides an opportunity to reassess what followed and the Bush  presidency.
Read more

Supt Gerry Richardson was shot at point-blank range as he grappled with an armed robber in 1971.
Read more

MOTD2 pundit Stephen Warnock says Liverpool's 3-0 win over Leeds on Sunday was a reminder of how good they are when they are at their best.
Read more

The Brewers scored eight runs and struck out 36 times in the three-game series.
Read more

San Diego Padres stars Fernando Tatis Jr. and Manny Machado were among players seen helping family members and fans into shelter at Nationals Park as a shooting unfolded outside the ballpark.
Read more

California bans state-funded travel to Florida and 4 other...

Before Bonta's announcement Monday, 12 other states were already on the California ban list.
Read more

A racehorse startled onlookers on Saturday after she bucked her rider and made her way onto an interstate highway.
Read more

A dozen drug manufacturers and distributors accused of fueling the nation's opioid epidemic face a jury for the first time Tuesday.
Read more

A recent memorandum from the New York Police Department (NYPD) advises officers not to stop residents who are smoking marijuana in public. The memo sha...
Read more

A senior ExxonMobil lobbyist unknowingly told a Greenpeace activist that plastic disposal and recycling will be a “big business” for petrochemical firms.Keith McCoy, who was earlier recorded saying energy companies fought against “some of the...
Read more

Starbucks announced that masks will be "optional" for vaccinated customers starting Monday, becoming the latest company to ease face covering requirements following new guidance from the Centers for Disease Control and...
Read more

Britain's main opposition Labour Party said it will push for a vote in parliament on Monday over support for U.S. plans to introduce a global minimum corporation tax rate.
Read more

MLB pitcher Tyler Gilbert throws a no-hitter in his...

The modern-era record in Major League Baseball for most no-hitters thrown in a season was broken on Saturday in a sensational way, as a pitcher achieved the feat in his first career big league start.
Read more

The Department of Justice (DOJ) announced Tuesday it is forming five cross-jurisdictional firearm trafficking strike forces in an effort to reduce violent crime across the country. ...
Read more

The SNP leader was confronted by former deputy leader of Britain First Jayda Fransen outside a polling station.
Read more

3 officers resign after rough arrest of woman with...

Rep. Matt Gaetz (R-Fla.) in 2018 paid an accused sex trafficker who later sent the same amount of cash to teen girls, according to a report from The Daily Beast.
Read more

Spain is welcoming vaccinated Americans to the country starting June 7, not waiting for the European Union to set its own date for reopening borders that were closed for the coronavirus pandemic....
Read more

Big rise in numbers of migrant children on Mexico-US...

The increase from 380 to nearly 3,500 has overwhelmed local facilities in Mexico, the UN warns.
Read more

A defendant in the Jan. 6 riots at the U.S. capitol is the first to face a firearms charge under a riot law making it unlawful to carry a firearm while rioting. ...
Read more

Earlier this month the Japanese carmaker said it was was investing £1bn in the site.
Read more

The founders of the classified site Backpage
Read more

Need help with that dorm room checklist? Here are some devices, gadgets and accessories that will prove a boon to your kids’ quotidien college experience.
Read more

Your Weekend Reading: The Need for a New Approach...

From the air, the illegal gold mines look like wounds in the dense jungle of southern Colombia
Read more

Tennessee Nissan plant to close for 2 weeks due...

Shutdown of factory that employs 6,700 people is among the longest at any big U.S. auto plant since the semiconductor shortage started.
Read more

The prime minister says he will take steps to end “ludicrous barriers” to trade between NI and GB.
Read more

Ken Peng on the Markets (Radio)

The upcoming Nasdaq listing of Coinbase Global Inc. has fueled a frenzy among Korea investors to pile into the nation’s cryptocurrency stocks, making a broker with a minority stake in a local crypto exchange the best-performing large stock year-to-date.
Read more

Linux on Apple M1 silicon is right around the...

Asahi Linux has sent in a pull request to merge its port with the mainline kernel.
Read more

President Biden announced on Tuesday that one million people have enrolled so far in Affordable Care Act coverage during a special sign-up period his administration created.Biden reopened ObamaCare enrollment upon...
Read more

Former U.N. Ambassador Nikki Haley on Tuesday ripped Kamala Harris for her handling of the border, as the Vice President still has yet to set a date to travel there and has gone nearly 100 days without a press conference on the migrant surge.
Read more

Boxing: How to catch Lovlina Borgohain semi-final bout in...

India's woman boxer Lovlina Borgohain is in the semi-finals of 69 kg category, and she will get a bronze even if she loses. Mary Kom and Vijender Singh are the Indian boxers before her who have won an Olympic medal.
Read more

Dubai is building an art collection — without buying...

Dubai is putting together its first institutional art collection, and it will do so by borrowing artworks.
Read more

A former Wells Fargo & Co. top executive at the center of the company’s fake accounts scandal is asserting her constitutional right against self-incrimination to push back against claims by the Securities Exchange Commission that she misled investors.
Read more

Microsoft has come up with a workaround for OneDrive's Android app failing to sync photos and videos.
Read more

The longtime nemesis of the former president made the claims while speaking to the "Sway" podcast.
Read more

A volcano in Spain’s Canary Islands continues to produce explosions and spew out lava, five days after it erupted
Read more

Psychonauts 2 is ‘playable’ and coming to Xbox Series...

Honda workers in Swindon to face ‘reality check’ after...

The G7 Forces Africans to Choose: China or Progressivism

Unlike the West, China avoids exporting its culture to Africa. The post The G7 Forces Africans to Choose: China or Progressivism appeared first on The American Conservative.
Read more

Go-karts, bowling alleys and eateries have taken the place of closed retailers on the High Street.
Read more

The shake-up at the banking giant's London HQ comes as it pursues plans to shrink office space by 40%.
Read more

Greensill row: David Cameron ‘believes he should have sent...

The former PM now thinks he should have written to the Treasury over Greensill Capital, says a friend.
Read more

Half the world is now using mobile Internet

Coverage has increased but adoption is still a challenge, says GSMA
Read more

00:00So Larry in terms of what's next.What does it mean. I just have to ask you to leave and have everything just so...
Read more

For years, algorithms have driven workers to meet punishing quotas. A state bill trying to reinject humans into the workflow has cleared a big hurdle.
Read more

Cisco has a formidable reputation in the business networking space, and it's easy to see why when evaluating these great VoIP devices.
Read more

In an era where every word and action is under the microscope it's important when a major celebrity express a sincere apology, writes Peter Fox. Ruffalo's statement chose to stand up for the dignity of Jews, who are facing a surge in anti-Semitism, and risk b…
Read more