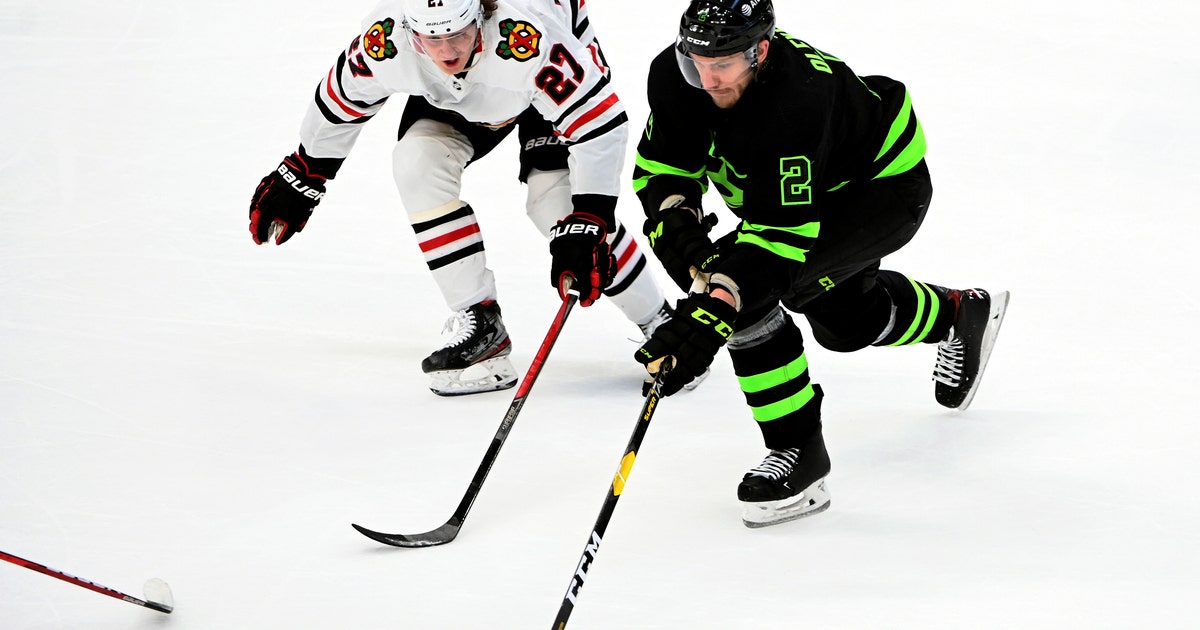 DALLAS (AP) Carl Soderberg and Alex DeBrincat scored power-play goals in the second period and the Chicago Blackhawks scored on four of their first eight shots in a 4-2 victory over the Dallas Stars on Thursday night.

Patrick Kane and Adam Boqvist each had two assists to help the Blackhawks close their four games in Dallas this season at 3-1-0. In the opener of the two-game series Tuesday night, the Stars beat the Blackhawks 6-1.

Roope Hintz and John Klingberg scored for the Stars. They finished a six-game homestand 2-3-1. Anton Khudobin made only four saves, all on penalty kills, before being replaced by rookie Jake Oettinger in the third period.

Kubalik gave the Blackhawks a 1-0 lead at 5:26 of the first period after gathering a loose puck just outside the blue line and slipping a backhander between Khudobins pads. It was Kubaliks 10th of the season and seventh in his last 12 games.

Soderberg doubled the lead by redirecting a shot by Boqvist from the right point for a power-play goal, his fifth goal of the season, at 2:57 of the second period.

DeBrincat drew an interference penalty and scored on that power play from the right dot at 16:10 of the second period for his team-high 15th goal.

Dallas closed the gap with Hintzs seventh goal of the season at 9:43 of the third period followed by Klingbergs low wrister less than two minutes later, his fifth of the year.

Blackhawks: At Florida on Saturday and Monday.

Stars: At Columbus on Saturday and Sunday. "CBS This Morning" talks to Alexis Ohanian, founder of Seven Seven Six and co-founder of Reddit about advocating that Congress create a national paid family and medical leave program. He discusses his own experience with parental leave and being a father.
Read more

Phillip Lühl was told he must take a paternity test before returning home with his new-born twins.
Read more

McConnell's comments are likely to boost calls from progressive judicial groups for Justice Stephen Breyer to retire from the Supreme Court.
Read more

Family poisoned at luxury resort in the U.S. Virgin...

A family vacation became a nightmare for a Delaware couple and their sons, who fell deathly ill due to exposure to a dangerous chemical. Crimesider reporter Michelle Sigona goes over the details.
Read more

Next Africa: Is Nigeria Falling Apart?

Nancy Daoud on the Markets (Audio)

On patrol with a real-life Robocop

Police are using a robot to fight crime in Los Angeles.
Read more

The prime minister is promising to be the savior of the beloved National Health Service and steal another mantle from the opposition Labour Party.
Read more

McAuliffe calls on ‘EVERY Virginia employer’ to mandate vaccines...

Democratic gubernatorial nominee and former Virginia Gov. Terry McAuliffe called on all of the state's employers to require employees to get vaccinated against COVID-19 after the Food and Drug Administration (FDA) granted...
Read more

Sen. Amy Klobuchar (D-Minn.) said Sunday that social media companies "greatly contributed" to misinformation over the coronavirus, adding that liability standards for those companies should be changed....
Read more

Friends reunion to air in UK and Ireland on...

The long-awaited follow-up to the popular US sitcom will feature all six of its original stars.
Read more

The long-awaited Apple AirTag has finally been unveiled, but is Apple’s expensive location-tracking accessory a worthy rival to Tile?
Read more

The following is a transcript of an interview with Fiona Hill that aired Sunday, June 20, 2021, on "Face the Nation."
Read more

A firm is advertising for the dreamy role of "Bath Boss," which will see the lucky applicant staying in top hotels and testing luxury bathtubs for $5,000.
Read more

Louisiana becomes first Democrat-led state to opt out of...

Donald Trump had a surprise meeting with leaders of the Republican party Thursday, following backlash from his controversial abortion comments. As Major Garrett reports, it's not the first time Trump's self-proclaimed "phenomenal" stance on women's issues has…
Read more

The move is expected to align with the recommendation the agency's independent vaccine advisers made last week.
Read more

A Boombox Disguised as an Ice Chest Is Summer’s...

House GOP leaders teed off on Rep. Nancy Pelosi (D-Calif.) Tuesday morning, accusing the Speaker of neglecting her duty to defend the Capitol on Jan. 6 and demanding answers about her role in the violent attack that injur...
Read more

Conserving Freedom in Times of Crisis

Too many Americans are passive subjects of government expertise, and too many officials mistrust the people they represent. The post Conserving Freedom in Times of Crisis appeared first on The American Conservative.
Read more

The Delta variant is responsible for the nation's exponential surge in COVID cases, according to the Centers for Disease Control.
Read more

SpaceX surpasses Apollo with tallest-ever rocket on a launchpad

SpaceX has taken the record for the tallest rocket ever built after stacking the Starship spacecraft onto its main Super Heavy rocket booster.
Read more

If the information was leaked by someone with access to IRS data, it would be one of the biggest breaches in the agency's history.
Read more

Green Beret Killed in Hazing Incident Was Sick of...

Mexican Billionaire Says His Bank Is ‘Working’ to Accept...

Mexican billionaire Ricardo Salinas Pliego endorsed the use of Bitcoin and said his bank is on the way to accepting the cryptocurrency.
Read more

Critical race theory has come under intense scrutiny in 2021, with numerous states taking steps to ban it in public schools.Opponents of the academic theory argue the curriculum can be divisive, ...
Read more

LIVE UPDATES: Biden to meet with Russia’s Putin in...

President Biden is set to meet with Russian President Vladimir Putin on Wednesday for a highly anticipated showdown between the two leaders.
Read more

Myanmar: The small embattled town that stood up to...

Mindat put up tenacious resistance to the Burmese army but is now in desperate need of help.
Read more

The Southern Baptist Convention came under fire in 2019 after a news report documented hundreds of sex abuse cases in its churches.
Read more

A woman who won $2 million in the California Lottery last fall was allegedly killed by her husband in Oklahoma along with her 1-year-old daughter, according to reports.
Read more

Microsoft Edge to offer a new release cycle for...

Microsoft is adding an extended 8-week release cycle option to Edge in addition to its shorter 4-week option.
Read more

On account of the Poco X3 Pro launch, the Poco X3 price in India has been officially reduced by Rs 2,000 across the board, now starting at Rs 14,999.
Read more

Deutsche Bank AG said it will allow its U.S. interns to decide if they want to work from home or be in the office this summer.
Read more

Rachel Dolezal, president of the Spokane chapter of NAACP, has resigned after her parents denied her claims she is African-American. CBS News John Blackstone has more.
Read more

U.S. forces have vacated Bagram Airfield in Afghanistan after nearly 20 years, bringing the U.S. military closer to a final withdrawal that the Pentagon says will be completed by late August
Read more

Sheriff to seek release of body cam video of...

One of the Apple Watch’s slickest features isn’t working...

Apple Watch’s unlock iPhone feature isn’t working for all iPhone 13 users, and there’s no telling when a software fix is incoming.
Read more

Another 21 U.S. citizens evacuated from Afghanistan

The State Department did not say how many Americans remain in Afghanistan.
Read more

Thai leader gets AstraZeneca vaccine: ‘We must believe our...

China Evergrande Groups debt crisis is all manageable even as lenders are hurt by the property developers troubles, Ray Dalio said. Investors will be...
Read more

Pelosi puts her stamp of approval on tech antitrust...

The House speaker's remarks come as an increasing number of her fellow Democratic California lawmakers raise concerns about the bills.
Read more

A watchdog is investigating whether the airlines broke the law in not offering Covid refunds.
Read more

The one-term congresswoman, who lost last November, is mulling a campaign for the seat held by GOP Sen. Chuck Grassley.
Read more

Israel PM’s trial resumes as parties weigh in on...

Uncharted and other Sony movies will come to Netflix

Sony’s movie lineup from 2022 onwards will stream exclusively on Netflix US after their theatrical release, including the upcoming Uncharted movie and a few Spider-Man-related movies.
Read more

The stable OxygenOS 11 update complete with Android 11 is now finally rolling out for the OnePlus 7T and 7T Pro. The update includes a dedicated dark mode toggle and enhanced privacy controls.
Read more

Dershowitz files multimillion-dollar lawsuit against Netflix over portrayal in...

What can Donald Trump do to shore up his...

Christa Ludwig, a renowned interpreter of Wagner, Mozart and Strauss who starred on the world’s great stages for four decades, had died at her home in Klosterneuburg, Austria
Read more

Whether you build speed by lengthening your stride or increasing your cadence, there's a Metaspeed for you.
Read more

Michael Flynn, the former national security adviser in the Trump administration who has repeatedly courted controversy by repeating conspiracy theories, in a new video appears to joke about using a gun on people in ...
Read more

Social media users are joking about the Republican senator taking a vacation, following the backlash he faced for flying to Cancun during Texas' winter storm in February.
Read more

Democrats are clinging onto Nevada's senior Senate seat and governor's mansion heading into the midterms as early signs point to a bare-knuckle brawl in the two marquee contests.Sen. Catherine Cortez Masto (D) and...
Read more

Baystate Business: The 4th of July Special is On...

Upstox ramps up security after breach expose data of...

A major data breach at Upstox seems to have resulted in compromising of personally identifiable details of over 25 lakh users. The company has claimed that funds and share have not been impacted at all.
Read more

Gurbir Grewal will take the helm of SEC enforcement on July 26, after serving as New Jersey's top law enforcement official since 2018.
Read more

A eulogy to my super-cheap running headphones

In a previous column, I sang the praises of my cheap running headphones. Now I just sing in grief, as they slowly fade away.
Read more

Two of the three people killed in a car crash in San Diego Friday have been identified as married detectives Jamie Huntley-Park and Ryan Park, police said.
Read more

The Senate swiftly passed the $2.1B emergency security supplemental bill Thursday in in a rare unanimous vote.
Read more