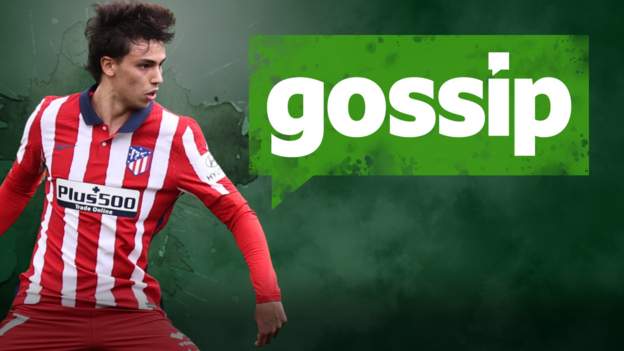 Manchester City are eying a potential move for Atletico Madrid’s 21-year-old Portugal striker Joao Felix as a possible replacement for Sergio Aguero, who is out of contract in the summer. (Eurosport)external-link

Cristiano Ronaldo’s agent Jorge Mendes has spoken to Real Madrid about the possibility of the 36-year-old Portugal forward returning to the Bernabeu from Juventus. (El Chiringuito, via Marca)external-link

Manchester United are uncertain whether to extend Uruguay striker Edinson Cavani’s contract, with staff at the club frustrated over the 34-year-old’s fitness situation. (Manchester Evening News)external-link

Montpellier president Laurent Nicollin is hoping to persuade 29-year-old Algeria striker Andy Delort, who has previously been linked with Newcastle United and Wolves, to remain at the club by promoting him to captain next season. (Midi Libre, via Team Talk)external-link

Brighton have expressed interest in 33-year-old Portuguese striker Eder, who scored the winner in the Euro 2016 final. The former Swansea forward will be a free agent in the summer when his contract with Lokomotiv Moscow expires. (Sports Express, via Sun)external-link

Bayer Leverkusen lead Arsenal in the race to sign Germany midfielder Julian Draxler from Paris St-Germain when the 27-year-old’s contract expires in the summer. (Todofichajes – in Spanish)external-link

Manchester United boss Ole Gunnar Solskjaer says the club have started talks with Ivory Coast centre-back Eric Bailly, 26, over a new contract, with his current deal set to run until the end of next season. (Manchester Evening News)external-link

Bayern Munich boss Hansi Flick, 56, has dismissed speculation that he is being lined up to replace Joachim Low as Germany manager. (Goal)external-link Overnight Defense & National Security — Biden: US troops to Ukraine ‘not on the table’

Manny Pacquiao says he will run for Philippine presidency...

Boxing star Manny Pacquiao said on Sunday he will run for president of the Philippines next year, after railing against corruption in government and what he calls President Rodrigo Duterte's cozy relationship with China.
Read more

A Simple Bug Is Leaving AirTag Users Vulnerable to...

Apple has reportedly known about the exploit for months.
Read more

Scotland flanker Hamish Watson says comments that he would be too small to make an impact for the British and Irish Lions against South Africa are "a tiny bit frustrating".
Read more

We've heard a lot about the Samsung Galaxy Z Fold 3, but there are still some things we're unsure of.
Read more

A whole lot of sound and fury was followed by perpetual paralysis this week on the Hill as Senate Democrats tried for a second time to pass a voting rights bill, not a single Republican voted for it, and it was blocked from getting to the floor.
Read more

Gas jumps 20 cents a gallon in a month

U.S. drivers paid an average of more than $3.36 per gallon Monday, according to one price tracker.
Read more

Amazon pushes back return to office to January due...

Palestinian dad expects no justice for son killed by...

‘Squad’ Rep. Tlaib grilled over bill that would empty...

Rep. Rashida Tlaib, D-Mich., faced a grilling Monday by Axios reporter Jonathan Swan over her endorsement of a bill that is described as a "roadmap for prison abolition."
Read more

Rep. Karen Bass (D-Calif.) on Sunday said the "Black pastors" comment made by a defense attorney representing one of the men charged with murdering Ahmaud Arbery was "despicable."Kevin Gough, a l...
Read more

ByteDance is selling TikTok’s AI platform to other companies

Ecommerce companies queuing up to use TikTok’s recommendation engine into their services.
Read more

Sen. Marco Rubio (R-Fla.) in a Tuesday letter called on President Biden to fire Chairman of the Joint Chiefs of Staff Gen. Mark Milley over what he said was the "contemplation" of a leak of classified information to China...
Read more

‘Do or die’: Democrats plan revisions to sweeping voting...

The Democrats' revisions to the contentious election overhaul bill include extending deadlines, easing some rules and adding flexibility for states to implement it.
Read more

Orlando survivor’s poem: “The guilt of being alive is...

Patience Carter, 20, was in Orlando for a vacation with two friends, Tiara Parker and Akyra Murray. Carter got trapped in a bathroom with the gunman who killed 49 people at a gay nightclub early Sunday morning. Carter and Parker survived, but 18-year-old Murr…
Read more

Twins prized prospect Kirilloff will have to wait for...

Minnesota Twins prospect Alex Kirilloff will not be on the field for opening day.
Read more

Greenland election: Melting ice and mining project on the...

Why melting ice and a key mining project are on the agenda in Greenland's election.
Read more

President Biden is calling on local and state leaders to step up their vaccine requirements after the FDA's full approval of the Pfizer vaccine. Maryland Governor Larry Hogan talks to “CBS This Morning” about his state's plans and why he's ""ready and willing…
Read more

Swiss cast ballots on whether to allow same-sex marriage

Get 20% off Adobe Creative Cloud, including Photoshop, as...

Adobe's 20% price cut for its Creative Cloud All Apps bundle has returned, but it'll be disappearing again soon.
Read more

Energy companies are starting to pitch the idea that planet-warming natural gas can be erased by paying villagers to protect forests. Experts can’t make the math work.
Read more

Kansas Gov. Laura Kelly, a Democrat, came out on Friday against President Biden's COVID-19 vaccine mandate for businesses with 100 or more employees, saying she doesn't think it's the "correct" or "most effective" m...
Read more

It's a good thing Yankee Stadium is open to the public, because 27,807 fans on Sunday got to see the home team tie a record for a rare feat.
Read more

Dr. Sanjay Gupta: Simple steps for coexisting with the...

As we prepare to head into our second fall with the coronavirus, it's admittedly a strange time. On the one hand, the situation is better than last year, primarily because we have vaccines that are doing a terrific job of protecting the roughly 60% of America…
Read more

Atlanta plans to increase its police budget after initially considering steep cuts last summer in the wake of the death of George Floyd. It's among a number of cities across the country that are making similar moves amid rising crime. Local news reporter for …
Read more

‘The Five’ reacts to Fauci’s ‘Clintonian’ fireworks with Sen....

Kavala: The case that set Turkey on collision course...

Osman Kavala has not been convicted but his detention has set Turkey's leader on a collision course.
Read more

Time Out picks the ‘world’s coolest’ neighborhood for 2021

The top 10 includes the foodie hub of Leith in Edinburgh, Scotland and artsy Station District in Vilnius, Lithuania, but which neighborhood is the hippest hangout in Time Out's round-up?
Read more

Madagascar's state of drought and hunger is a "wake up call" to what the world can expect to see in the future because of climate change, according to a United Nations agency's leader.The nation represents "the beg...
Read more

A third jab against COVID is recommended for vulnerable people who did not have an ideal response to the first vaccine shots.
Read more

Should we phone E.T. by beaming messages into space?

Astronomers are debating whether to beam messages into space to try and contact aliens. Dr. Derrick Pitts, Chief Astronomer and Director of the Fels Planitarium at The Franklin Institute, joins CBSN with more on how this will work.
Read more

Euro 2020: Watch all the goals as Denmark’s incredible...

All the action and reaction to Denmark's impressive 4-0 victory over Wales as momentum builds behind the great Danes heading into the quarter-finals of the European Championship.
Read more

Colleges Are Urged to Require That Students Get Vaccinations

Colleges and universities should require all on-campus students to be vaccinated for the Covid-19 virus this fall, the American College Health Association said.
Read more

Surprise second round leader Richard Bland has an ideal game to thrive at the U.S. Open, Lee Westwood said after his fellow Englishman jumped to the top at Torrey Pines on Friday.
Read more

Senior Trump-era Department of Justice officials made a flurry of calls on Jan. 6, including two calls between the acting attorney general and then-Vice President Mike Pence, and late afternoon calls from the White ...
Read more

Instead of sending in social workers, a pioneering Illinois police program designed to aide despondent and suicidal veterans deploys officers who have military backgrounds of their own to 911 calls about vets in crisis.
Read more

A Massachusetts jury has sentenced Dzhokhar Tsarnaev to the death penalty for his role in the 2013 Boston Marathon bombing. CBS Evening News anchor Scott Pelley reports on the long-awaited ruling.
Read more

Newsom swats away Democratic challengers. Will his party live...

For now, Democrats have projected unity behind Newsom.
Read more

The Arizona division of a nonprofit responsible for collecting blood donations for hospitals said it is currently experiencing a blood supply shortage, and urged people to participate in upcoming donation drives. ...
Read more

The vulnerability was patched Monday, but hackers had already used it to spread malware.
Read more

Hezbollah accuses US of meddling in Lebanon’s port probe

Hezbollah has accused the U.S. of interfering in Lebanon’s investigation into last year’s massive explosion at the Beirut port, with the aim of implicating the militant group and its allies
Read more

Virus-Sniffing Dogs to the Rescue?

The Panasonic JZ1000 could be better for sound and upscaling, but when it's good it’s very good indeed
Read more

Loads of AMD PCs are coming with what looks...

AMD might be repurposing PS5 chips to be used in a new kit which 80+ systems will be built around.
Read more

Cybercriminals could be watching your home security footage

Who will win when Anthony Joshua defends his world title against Oleksandr Usyk on Saturday? Plus reaction to Derek Chisora and Dillian Whyte's next fights and more in this week's Fight Talk.
Read more

Senators warn of Chinese technology threats ahead of international...

The leaders of the Senate Intelligence Committee on Monday warned of continuing threats posed by the Chinese government to telecommunications systems and other critical technologies ahead of a major international su...
Read more

South Africa vaccinates some kids in test of Chinese...

School is always out for summer early in one part of England - but could that be about to change?
Read more

Dodgers Stadium reopened its COVID-19 testing site this week amid an increase in demand in the Southern California area, ...
Read more

India in talks to find ‘middle ground’ with Pfizer,...

India's government is in talks with Pfizer (PFE.N) and other vaccine manufacturers for import of their COVID-19 vaccines in accordance with local laws, a senior government official said on Monday.
Read more

Katie Marsden and her team-mates are aiming to do what no Great Britain women's ice hockey team has done before - reach an Olympics.
Read more