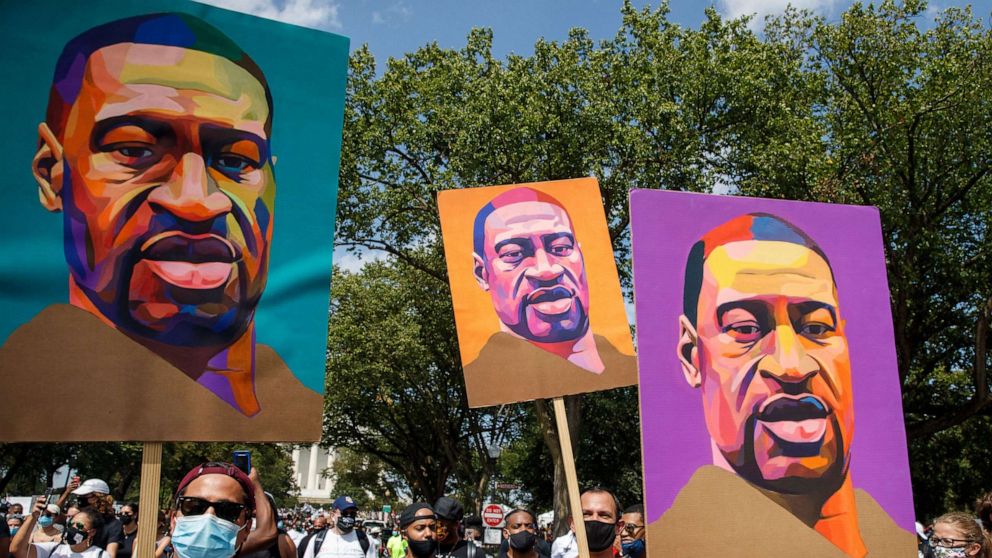 A $27 million settlement to the family of George Floyd has been unanimously approved by Minneapolis’ City Council.

Floyd, a 46-year-old Black man, died after being arrested on May 25, 2020. Video showed white police officer Derek Chauvin kneeling on the back of Floyd’s neck for more than nine minutes while Floyd repeatedly cried out, “I can’t breathe.”

Attorney Ben Crump said in a statement Friday, “George Floyds horrific death, witnessed by millions of people around the world, unleashed a deep longing and undeniable demand for justice and change. That the largest pre-trial settlement in a wrongful death case ever would be for the life of a Black man sends a powerful message that Black lives do matter and police brutality against people of color must end.”

The settlement is for the civil lawsuit brought against the city of Minneapolis and the four officers involved with Floyd’s death.

Floyd’s brother, Rodney Floyd, called the settlement “a necessary step for all of us to begin to get some closure.”

“Georges legacy for those who loved him will always be his spirit of optimism that things can get better, and we hope this agreement does just that — that it makes things a little better in Minneapolis and holds up a light for communities around the country,” Rodney Floyd said.

George Floyd’s death sparked protests in Minneapolis and across the nation.

Chauvin’s trial is now underway. This week, a judge reinstated a third-degree murder charge. Chauvin, 44, also has been charged with second-degree unintentional murder and second-degree manslaughter. He has pleaded not guilty to the charges. Massachusetts Gov. Charlie Baker (R) signed an emergency declaration on Tuesday ordering some hospitals to delay non-essential procedures due to staffing shortages.The governor, along with the st...
Read more

The New York City COVID-19 vaccine mandate for teachers overcame its latest legal challenge on Tuesday after its implementation on Monday.A request by multiple teachers and other employees to tem...
Read more

The framework identifies priorities for that massive bill, including expanded Medicare, free community college and green cards for some immigrants.
Read more

Rep. James Comer (R-Ky.), the ranking member on the House Oversight and Reform Committee, is requesting data, notes and emails from the intelligence community's report on the origins of COVID-19. ...
Read more

‘It’s time for Solskjaer to prove himself’ – Micah...

The Advertising Standards Authority will launch inquiries into false environmental claims made in ads.
Read more

Simone Biles has withdrawn from the vault and uneven bars event finals at the Tokyo Olympics. USA Gymnastics said in a statement Friday evening that th...
Read more

The Senate Is Mad as Hell at Facebook—Again

The latest hearing on Instagram and teen mental health was the depressing work of a legislature that can’t legislate.
Read more

Investors who love emerging markets but are spooked by China’s regulatory crackdown are pouring more money than ever into an ETF seemingly tailor-made for this moment.
Read more

But there was no breakthrough and there will be more talks next week.
Read more

Republican Reps. Dan Crenshaw of Texas and Tom Cotton of Arkansas on Friday launched a whistleblower form for military service members so that the armed forces don't "fall to woke ideology."
Read more

Kim Kardashian West is in the middle of a court battle alleging that she failed to properly compensate cleaning staff at her California home and did not allow them to take breaks.According to a lawsuit filed Monday...
Read more

Hacker is stealing the identities of victims, Surfside mayor...

Surfside Mayor Charles Burkett said Friday that a hacker is stealing the identities of victims who died in the condominium collapse in his city. According to WPLG Local 10, which first reported the news, officials say that the hacker stole the...
Read more

A nonprofit found that 267 Facebook pages and groups spread material glorifying violence ahead of the 2020 presidential election.
Read more

Adding dental and vision benefits to Medicare was one of the most critical aspects of the original Build Back Better plan for 52 percent of voters surveyed.
Read more

Officials announced Wednesday that a decision on whether spectators will be allowed into Olympic and Paralympic venues -- and, if so, how many -- will be made in June.
Read more

Nancy Davis on the Markets (Radio)

Pfizer Inc. said its Covid-19 vaccine was 100% effective in a final-stage trial in kids ages 12 to 15, a finding that could pave the way for shots for teens and pre-teens before the next school year.
Read more

How the WWE Won and Lost its Dominance

The wrestling giant's case provides compelling insights into the nature of economic concentration The post How the WWE Won and Lost its Dominance appeared first on The American Conservative.
Read more

For many U.S. communities, the bleak predictions laid out in a new UN climate change report are more a reflection of the present and not just what's to come.Residents in places like Miami, Utah a...
Read more

In the hours following Japan's devastating attack on U.S. military forces in Hawaii, President Franklin D. Roosevelt was remembered for "not losing his cool." David Martin reports on the timeline of FDR's actions between the attack on Pearl Harbor and his add…
Read more

Some great Xiaomi phones are discounted in Amazon’s early...

Some of the best Xiaomi phones have been discounted in the early Amazon Black Friday deals.
Read more

Two pre-teen girls have been mysteriously found dead along the same Florida canal and police are now working to identify them.
Read more

I Was The First Woman to Negotiate a Nuclear...

Tales from inside the very male world of nuclear diplomacy.
Read more

Transgender women allowed to play rugby in France after...

Transgender women can play rugby in France's domestic competitions from next season after the FFR board votes to go against World Rugby guidelines.
Read more

Chelsea 2-0 Atletico Madrid: Nobody will want to play...

Chelsea manager Thomas Tuchel believes no team would want to be drawn against his side in the Champions League, after advancing to the quarter-finals with a 3-0 aggregate win over Atletico Madrid.
Read more

The move comes after charges were sought against the prime minister over the president's killing.
Read more

US calls on Russia to do more to crack...

The White House called on Russia to do more to crack down on ransomware groups operating from the country but conceded that Moscow has taken "some steps" after President Joe Biden urged his Russian counterpart to tackle the groups in the summer. A senior admi…
Read more

Biden and Harris to meet with Asian American leaders...

While some commenters called the woman's complaints "ableist" and "bigoted," others speculated there was more to the story of the kids' behavior.
Read more

MLB pitcher Tyler Gilbert throws a no-hitter in his...

The modern-era record in Major League Baseball for most no-hitters thrown in a season was broken on Saturday in a sensational way, as a pitcher achieved the feat in his first career big league start.
Read more

Investing to produce more skilled workers must be part...

Our success depends on passing a Build Back Better Act that includes robust funding for workforce development and career and technical education. We might not get this chance again.
Read more

Our top Aussie streaming picks this weekend include Cooking with Paris, Val and the season finale of Physical.
Read more

The New York City Police Department on Monday released video footage showing a brutal stabbing in broad daylight when an assailant, riding a bike, approaches a food delivery driver, who is also on a bike, and stabs him in the back.
Read more

Ten years ago the Christie Report set out a blueprint for Scottish public service reform. Why has it not happened?
Read more

Eleven women filed a lawsuit against the Eastern Michigan University (EMU) Board of Regents, its police department and two fraternities for allegedly mishandling their sexual assault claims.The l...
Read more

Aquaman 2 on set photo may have teased its...

Filming has begun on Aquaman 2, and its director may have already teased a potentially big plot point for the DCEU sequel.
Read more

Jury selection begins Monday in the trial of Kyle Rittenhouse, who was 17 when he shot three people, killing two of them, during an August 2020 protest against police brutality in Kenosha, Wisconsin
Read more

Vermont's Republican Party has scheduled a "Let's go Brandon" rally - to be held in the city of Brandon, Vt.The chant has become popular among Republicans as an alternative to a profane change di...
Read more

Progress toward a bipartisan deal touching the fraught issue of police bias is currently at a standstill.
Read more

Vancouver Whitecaps say three academy players were assaulted on Saturday in what the side believes to be a racially motivated attack.
Read more

The U.S. Senate passed a bill Wednesday that would ban all goods from or made in China’s Xinjiang region unless importers can prove they weren’t made with forced labor, the latest move to punish Beijing for its treatment of its Uyghur ethnic minority.The Uygh…
Read more

"I'll make sure I'll be able to deliver and close every bridge I can to help fix the system because I was affected by that," Meek Mill said Thursday.
Read more

If true, and you’re tempted to grab one of these graphics cards later today, expect the usual battle against scalpers.
Read more

Presented by Uber Driver Stories Albany may have been soaking up all of the crime and corruption attention lately, but New York City is...
Read more

Some seek more boxes to check for ‘other’ Pacific...

The Warning Label Parents Are Slapping On ‘Dangerous’ Social...

“We’re Momming Today” with Marc Berkman, a father and CEO of the Organization for Social Media Safety on how social media can be addictive, even deadly, and how parents can keep their kids safe on it.
Read more

Kobe Bryant formally inducted into Hall of Fame in...

Why Netflix fantasy show Shadow and Bone is more...

Shadow and Bone's author and showrunner reveal how Netflix's adaptation changes the fantasy novel series for the better.
Read more

The fix is scheduled to land in the stable Outlook release by the end of April.
Read more