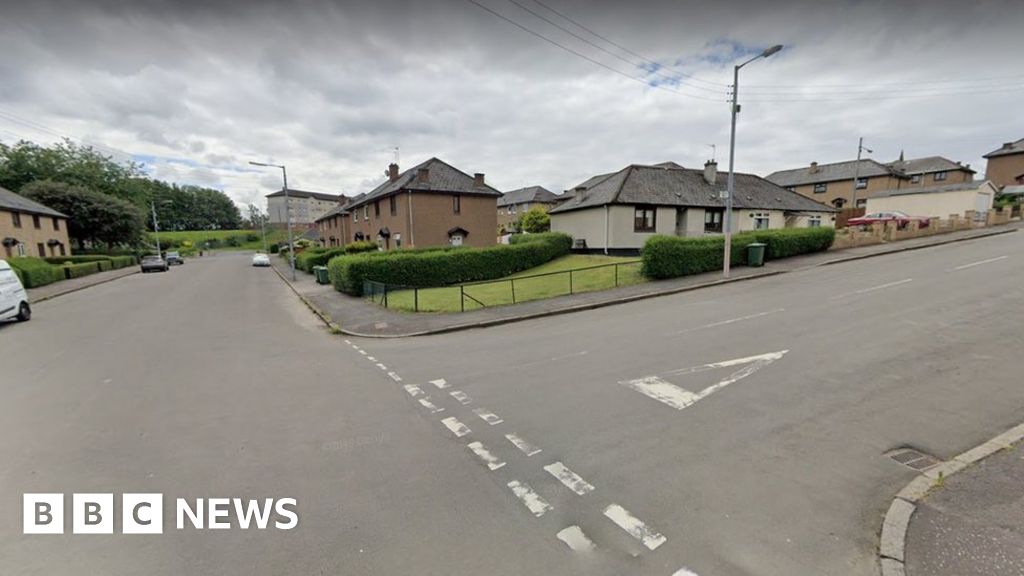 A man is in hospital with serious injuries after being deliberately struck by a car in Glasgow.

The 29-year-old was knocked down at the junction of Hollybank Street and Kintyre Street in the Royston area at about 18:25 on Monday.

Police said they were treating the incident as attempted murder.

Det Sgt Stephen Palmer appealed for witnesses and said he was keen to speak to anyone with dashcam footage or private CCTV from the area. The Papers: Boosters ‘for all adults’ amid ‘fight to save Xmas’

Biden to provide update Monday on US response to omicron variant

Dawid Malan makes 76 as England thrash Sri Lanka by 89 runs in Southampton to complete a 3-0 clean sweep in the Twenty20 series.
Read more

Rohingya refugees pour into Bangladesh after fleeing violence in...

U.N. leaders have called the violence in Myanmar's Rakhine state a clear example of ethnic cleansing. About 400,000 refugees from the Muslim Rohingya community have crossed the border into Bangladesh as the military torches Rohingya villages. BBC News South A…
Read more

Wirathu, dubbed the "Buddhist Bin Laden", is known for his anti-Muslim and pro-military views
Read more

The husband of missing California woman Maya Millete is contesting a gun violence restraining order (GVRO) that was filed against him last month, claiming that his guns were seized illegally by police.
Read more

Those in England will be offered a jab or the chance to book one by 23 August, the government says.
Read more

Senior Swiss diplomat in Iran ‘dies in fall from...

Iranian media report that the 51-year-old woman fell from the high-rise building where she lived.
Read more

Colorado mother files lawsuit over arrest of son with...

The boy was reportedly "aggressively handcuffed" and then left alone for two hours.
Read more

Didi Global Inc. plunged in premarket trading after a Chinese regulator ordered the removal of the company’s platform from app stores, days after a $4.4 billion initial public offering in the U.S.
Read more

‘Acapulco’ brings the storied Mexican resort to a new...

The new bilingual comedy series "Acapulco" on Apple TV+ is set in the Mexican resort with its glamorous past, stars Eugenio Derbez and Enrique Arrizon said.
Read more

The Latest: More than 50% of Japan’s population vaccinated

Zoe Alexander told the suspects in the 2015 Paris attacks trial that they are war with themselves.
Read more

Watch: What a dive from Davidson…

After his side avoided a Scottish Cup final slip-up, St Johnstone manager Callum Davidson takes a celebratory dive across the dressing-room in a moment shared on social media by striker Stevie May.
Read more

A procession of 22 ancient Egyptian royal mummies passed through downtown Cairo on Saturday on their way to a new museum three miles away as part of a lavish ceremony to celebrate Egypt's history....
Read more

Asking OPEC to drill more is ‘lunacy’ after being...

Mike Taylor criticized the Biden administration for energy policies that are making energy prices go up and putting Americans in a 'crunch.'
Read more

Five council areas in southern Scotland and northern England team up to seek the UK title in 2025.
Read more

Bitcoin declined for the sixth time in seven days, extending losses after President Joe Biden was said to propose almost doubling the capital-gains tax for the wealthy.
Read more

A small plane crashed into a home in Hattiesburg, Mississippi, late Tuesday night, according to the Hattiesburg Police Department.
Read more

Conservatives lash out at the military over ‘woke’ policies

For the most part, conservative critics have primarily aimed their fire at Defense Department leadership. But that’s not always the case.
Read more

Killamarsh: Man in crown court charged with murders of...

Damien Bendall is accused of killing Terri Harris and three children at a house in Derbyshire.
Read more

Weeks before the government is due to fully re-open its economy, U.K. businesses are warning that the potential for a fresh wave of restrictions is posing a threat to their ability to reboot as well.
Read more

Igor Danchenko, who worked on a largely unsubstantiated 2016 dossier on Donald Trump, is arrested.
Read more

Biden warns of ‘devastating’ consequences if Navalny dies in...

President Joe Biden said he warned Russian President Vladimir Putin Wednesday of consequences if jailed Russian opposition leader Alexey Navalny were to die in prison, though he declined to specify which actions he would take.
Read more

Covid-19: Hancock to face MPs after Cummings attack and...

Is this the dawn of a vigilante era?

Verdicts in criminal courts should make communities safer and our streets less dangerous. But the acquittal of Kyle Rittenhouse, the teenager accused of killing two people and shooting another during a Black Lives Matter protest in Kenosha, Wisconsin, in Augu…
Read more

Vials found at a vaccine research facility in Pennsylvania that were marked "smallpox" contained virus used to make the vaccine and not the virus that causes the disease, the US CDC reported Thursday.
Read more

Dems can use unprecedented move for an extra filibuster-proof...

His interpretation of a new ruling could give Democrats significantly more opportunities to push their legislative priorities past GOP opposition.
Read more

Retired Brazilian soccer star Pelé remained in intensive care on Friday as he recovered from surgery to remove a tumor on the right side of his colon.
Read more

Will Stephens, head of Asia-Pacific quantitative and systematic strategy at Credit Suisse Group AG, discusses the liberalization of capital markets in China. He also talks about the impending market reform at the Tokyo Stock Exchange. He speaks on the sidelin…
Read more

The upcoming Nintendo Switch 2 is expected to feature 4K resolution, but will it chase this benchmark instead of meaningful upgrades to the console design?
Read more

Although the Tokyo Olympics are almost four years off, the stationmaster at the city's landmark train station already seems to be running his own kind of marathon every day. Seth Doane has sent us a Postcard from Japan.
Read more

The Democratic civil war is the gift that keeps giving to McConnell.
Read more

Feds, Texas square off in court over novel abortion...

Biden administration intends to relocate thousands of Afghans who...

The Biden administration intends to relocate thousands of Afghan nationals who have worked alongside US diplomats and troops in order to protect their safety while they wait for their visa applications to be approved, senior administration officials say.
Read more

Researchers say that women who use birth control pills for five years or more may have an increased risk of brain tumors. Also, many adults do not get the weekly recommendations for physical activity. Eboni Williams reports on the day's top health news.
Read more

Blinken on Afghanistan: ‘This is not Saigon’

Secretary of State Antony Blinken on Sunday asserted that the deteriorating situation in Afghanistan "is not Saigon" as a Taliban takeover of the country now appears to be all but inevitable.While appearing on CNN'...
Read more

Drive to thrive: Netflix’s docu-series a boost for Formula...

Netflix's F1 series has been embraced in the U.S., where TV ratings are up.
Read more

The star brings his three-year-old on stage as he accepts a prize for artist of the decade prize.
Read more

Halima Cisse, 25, gave birth to nonuplets at a clinic in Morocco in an "extremely rare" case.
Read more

‘Fall back’ Sunday: Where and when does daylight saving...

The end of daylight saving time is quickly approaching for much of the United States.
Read more

ER or urgent care? How to know where to...

Urgent care clinics make it easy to get treatment for an injury or illness, but with certain symptoms you should head straight to the hospital instead. CBS News' Marlie Hall reports.
Read more

The Greek island of Crete was hit by a 6.3 magnitude earthquake on Tuesday.The undersea earthquake occurred around mid-day on the island and was followed by aftershock earthquakes of 4.1 and 4.6 ...
Read more

British number one Dan Evans reaches the second round of Queen's with a 6-4 6-4 win over Australia's Alexei Popyrin.
Read more

France's parliament has approved a bill that will mandate vaccine passes for those traveling within the country and will require health care workers to get the vaccine by mid-September, The Associated Press ...
Read more

Obama looks to give new momentum to McAuliffe

Former President Obama is hitting the campaign trail with Virginia Democratic gubernatorial candidate Terry McAuliffe on Saturday in hopes of energizing a relatively unexcited Democratic base ahead of what is expected to be a nail biter of an...
Read more

The BBC extends its contract to broadcast Wimbledon for an additional three years, taking its partnership with the All England Club through to 2027.
Read more

The Kenosha, Wis., Police Department said Friday that 55 additional people have been charged with crimes in connection to protests that became violent last year over the shooting of Jacob Blake.Kenosha Police Chief...
Read more

A leading health expert is swatting down a claim from Texas Gov. Greg Abbott (R) that his state will soon reach herd immunity from the coronavirus."We absolutely are not declaring victory at this time. We remain ve...
Read more

Get to know all five teams in the National League Central before the first pitch is thrown in 2021.
Read more

Nicholas Watt was pursued by demonstrators during an anti-lockdown protest in London in June.
Read more

House Democrats on Monday yanked more than a dozen bills from the floor schedule - including one honoring police officers for defending the Capitol on Jan. 6 - after conservative Republicans threatened to force stand-alon...
Read more

It comes as the health service experienced another weekend of serious pressures.
Read more

A Chinese company is collecting and storing the genetic data of millions of women and their unborn children through its prenatal tests, according to a ...
Read more

Alabama House votes to end ban on yoga in schools