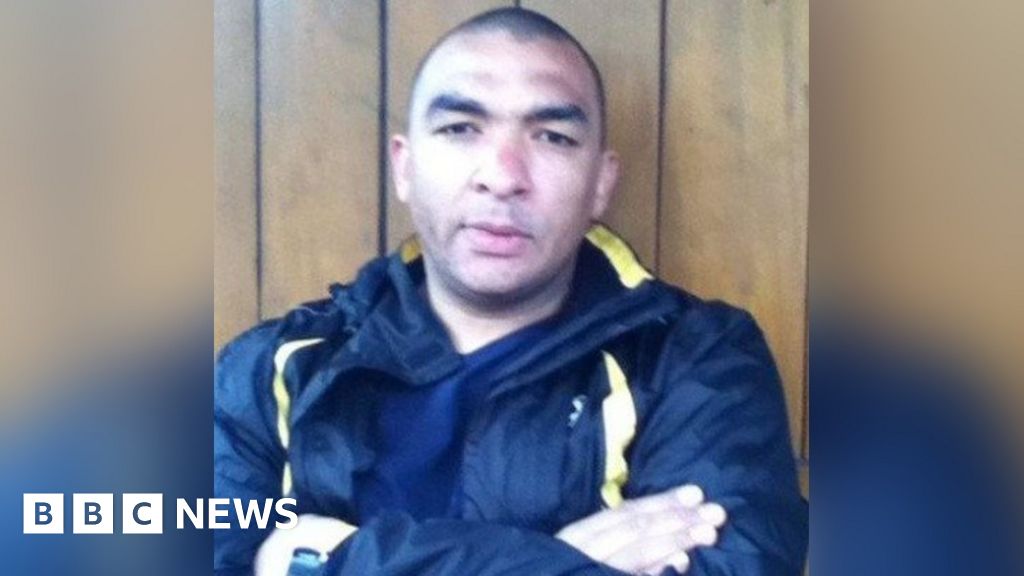 The way in which police officers restrained a father-of-two contributed “more than minimally” to his death, an inquest jury found.

Leon Briggs, 39, died in November 2013 after being detained at Luton police station under the Mental Health Act.

During a “mental health crisis”, Mr Briggs was restrained face-down in the street, the inquest heard.

A jury found police officers and ambulance workers made a number of serious failures.

The inquest, held in Milton Keynes, heard that officers were called to Marsh Road in Luton on 4 November due to concerns about his behaviour.

The lorry driver was detained in a cell at about 14:25 GMT under the Mental Health Act. He became unconscious and was pronounced dead in hospital at about 16:15.

Mr Briggs was face-down on the concrete for more than 13 minutes.

The jury found the use of force in a “dangerous” position “more than minimally contributed to his death”.

It also found that “inappropriate weight” was used against him “at times”, though police officers did “reasonably believe” it was appropriate while he was suffering a psychotic episode and had taken amphetamines.

This is a breaking news story and will be added to. Ahmaud Arbery’s mother fulfills promise: “I will get justice”

Thomas Markle apologized again for the staged photoshoot ahead of the royal wedding that severed his relationship with his daughter, Meghan Markle.
Read more

Judge Sharon Gleason wrote that the exclusion of foreign greenhouse gas emissions in an alternatives analysis was "arbitrary and capricious."
Read more

Microsoft is making it even easier to download PowerToys in Windows 11 by adding the set of utilities to the Microsoft Store.
Read more

One company is trying to persuade small-scale renewable generators to mine crypto currency.
Read more

The UK wants the European Court of Justice removed from oversight of the NI Protocol.
Read more

With Jack Grealish and Harry Kane considering their futures, BBC Sport looks at some players who turned down money-spinning moves to become legends at their clubs.
Read more

Rio: At least 25 deaths during a police operation...

Three German citizens are arrested in Paraguay over the murder of an archaeologist and his daughter.
Read more

This is the first report of this fungus-like pathogen in Europe.
Read more

For Biden and NATO, Turkey is a Headache That’s...

Whatever happens between Biden and Erdogan in Brussels, Turkey has made clear it plans to go its own way.
Read more

Protestors hung a "no Nazis in Nashville" banner over the storefront on Saturday in response to the post, where the yellow "not vaccinated" patches appeared to mimic those worn by Jews in Germany while Adolf Hitler was in power.
Read more

Jurgen Klopp says the "only people who get punished are players and clubs" as Liverpool's Brazil players face a ban this weekend over Covid-19 protocols.
Read more

Volvo Car partners with Northvolt to develop and produce...

Volvo Car Group, owned by China's Geely Holding (GEELY.UL), announced plans on Monday for a joint venture with Swedish battery maker Northvolt to develop sustainable batteries for its electric cars and set up a gigafactory for production.
Read more

Chetham's Library in Manchester had been open continuously since 1653 before the pandemic struck.
Read more

The group of 26 Republicans wants information about who remains in Afghanistan after the frenzied evacuation effort at the end of August.
Read more

Asian share markets slipped on Monday after a raft of Chinese data showed a surprisingly sharp slowdown in the engine of global growth, just as much of the world races to stem the spread of the Delta variant of COVID-19 with vaccinations.
Read more

Peru has tripled its total coronavirus death toll to more than 180,000 after a government review revealed that officials had undercounted COVID-19 fatalities.According to ...
Read more

You Need a Place to Move to Before You...

An OPEC+ ministerial panel recommended a gradual increase in oil output to the end of the year, paving the way for the wider group to reach a deal that would keep a firm grip on supply even as prices trade at two-year highs.
Read more

Leigh Griffiths: Celtic and Dundee in talks with Parkhead...

Celtic and Dundee are in talks over a potential loan move for forgotten Parkhead striker Leigh Griffiths.
Read more

Germany’s top health official has expressed regret that some neighboring countries have paused their use of AstraZeneca’s coronavirus vaccine following reports of blood clots in some people, despite the lack of any evidence the shot was responsible
Read more

Sony Alpha ZV-E10 is a mirrorless camera with an...

Ring Video Doorbells can now take a message for...

Ring is rolling out Quick Replies to compatible doorbells in the UK, but where are the other Smart Responses offered in other territories?
Read more

Hammersmith Bridge: Toll could be imposed to pay for...

Motorists could be charged to use a temporary crossing to fund repairs to the original structure.
Read more

Two people drowned and dozens are missing on Thursday after a boat sank in the Democratic Republic of Congo.Transportation Minister Alimasi Malumbi Mathieu said the boat hit a rock o...
Read more

JoJo Siwa made her "Dancing with the Stars" debut alongside a female partner, marking the first time a same-sex couple has competed together on the show.The Nickelodeon star took to the dance floor with Jenna Johns...
Read more

What to expect from first night of the DNC

CBS News contributor Bob Schieffer and senior editor of the Atlantic Alex Wagner discuss important moments so far in the DNC and what to expect from the convention's first night.
Read more

Sorting out Trump’s comments on the Arizona audit

The former president has overstated what the analysts claimed.
Read more

Support for pupils varies according to which school you attend and where you live, report suggests.
Read more

Thomas comes out fast with questions in new Supreme...

Justice Clarence Thomas came out quickly with the first question of the new Supreme Court term, potentially indicating that he will continue to be a regular participant in oral arguments despite a return to on in-person format.
Read more

The woman killed in Saturday’s mass shooting at a New Jersey house party was a “hardworking” healthcare staffer who came to the U.S. from Jamaica, according to her grieving family and social media.
Read more

Sen. Ben Sasse on “what is coming next in...

The Senate passed sweeping legislation aimed at combating China's competitiveness on Tuesday, after Democrats agreed to punt the bill into June in the face of GOP slow-walking.The 68-32 vote hands a victory to Majo...
Read more

Ethan Nordean of Washington state and Joseph Biggs of Florida are charged with conspiring to stop the certification of the 2020 election.
Read more

Covid in Scotland: Phasing out of furlough scheme ‘threatens...

Business leaders warn that the move could hurt firms in sectors which are not yet allowed to fully reopen.
Read more

Italy’s fashion capital is again alive with the sound of shoppers swarming boutiques and editors filling socially distanced fashion week venues, a sign of a light at the end of the pandemic tunnel
Read more

Japan’s exports in July jumped 37% from a year ago, highlighting an overseas recovery from the coronavirus pandemic
Read more

Sentence next for ex-UAW leader who embezzled, lived large

A welder who rose from the factory floor to become president of a venerable U.S. labor union is facing a prison term
Read more

China used a five-day United Nations biodiversity conference in Kunming to celebrate its achievements in protecting habitats and improving its environmental record. Despite progress, a rift remains between rhetoric and reality.
Read more

Adolis García's infield single scored automatic runner Nick Solak in the 10th inning, giving the Texas Rangers a 3-2 victory over the Houston Astros and a sweep of their Texas rivals Sunday.
Read more

AMD kills off support for some older GPUs –...

Google says it has the ‘industry’s cleanest cloud’

Democratic governors tie themselves to Biden

Tensions after confrontations overnight in Ferguson

Florida Board of Education approves sanctions on eight school...

The Florida Board of Education on Thursday voted unanimously in favor of sanctioning eight school districts with mask mandates that do not allow parents to opt out.The eight districts - Alachua, Brevard, Broward, D...
Read more

Companies are racing to track everything about you. It could be a convenient way to reduce fraud—or seriously creepy and discriminatory.
Read more

Google recommends that all Chrome users update their browser to the latest version to patch several high-severity flaws.
Read more

A plan to address the growing orphaned wells crisis

The REGROW Act will put the skills and training of our energy workers to use reducing environmental hazards and public health risks and making previously unusable land productive again.
Read more

The Asian American and Pacific Islanders community is the least likely to report hates crimes, according to a study done by Survey Monkey and AAPI Data.In the ...
Read more

Australia broke with tradition to hold its swimming trials just six weeks before the start of the 2020 Olympics and former world champion Giaan Rooney said the move could reap rich rewards in Tokyo after disappointments at London and Rio.
Read more

Man says he bought ‘a lot’ of crystal meth...

A man who jumped out of a plane and onto the tarmac at a California airport said he purchased "a lot" of crystal meth before boarding the flight.Luis Antonio Victoria Dominguez, 33, was on board ...
Read more

The Epos H3 headset is a cracking choice for those who want a pair of headphones that sound good, no matter what you throw at them.
Read more

Black History Month: The sporting heroes who changed our...

BBC Sport takes a look at some of the black sporting heroes who simply meant everything to us, changed our lives and made us fall in love with sport.
Read more

His symptoms include extreme fatigue and tiredness, both common traits of long covid.
Read more

The House Ways and Means Committee on Friday turns to measures including an expansion in Medicare coverage and help for workers hurt by international trade as the key panel continues to flesh out major components of a $3.5 trillion tax-and-spending bill.
Read more

California's Death Valley reached 130 degrees on Friday, amid a historic heat wave that is impacting the Pacific Northwest and stretching into parts of the Southwest.  The blistering tempe...
Read more

Lyft Inc. recorded more than 4,000 claims of sexual assault from 2017 to 2019, according to a newly released safety report.  The review is...
Read more

Who should play the next Doctor Who? 10 candidates...