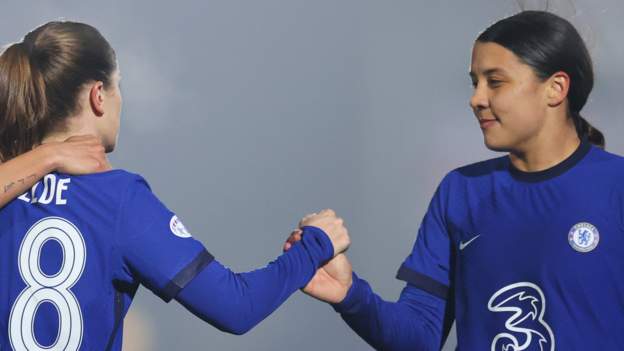 Chelsea will face two-time winners Wolfsburg in the quarter-finals of the Women’s Champions League.

The Blues have been knocked out of Europe by the German side on three previous occasions, including at the semi-final stage in 2017-18.

Bayern Munich will take on Swedish outfit Rosengard in the final quarter-final tie.

The first legs of the last-eight ties will be played on 23-24 March, with the return legs on 31 March and 1 April.

WSL leaders Chelsea have been drawn at home for their first leg while Manchester City are scheduled to travel to Spain first, although venues for the matches are yet to be announced.

Both Chelsea and Manchester City have previously reached the semi-finals of the Women’s Champions League twice.

Should they progress from their respective last-eight ties, Chelsea will face Bayern or Rosengard in the semi-finals, and City will play the winners of Lyon’s tie against PSG or Sparta.

The semi-final ties will be staged on 24-25 April and 1-2 May, with this season’s final set to take place in Gothenburg, Sweden, on 16 May. George Floyd: The wave of protest songs sparked by...

Lyrics of "rage and mourning" were written in the weeks following the African-American's murder.
Read more

White House commission on the Supreme Court to release...

A 36-member commission set up by President Joe Biden to study the US Supreme Court is set to release draft materials on Thursday, the White House announced.
Read more

Eleven correction officers were injured this past week from multiple inmate attacks at Rikers Island Davoeron Complex in New York, the ...
Read more

Hunter Biden on his memoir “Beautiful Things” and his...

The son of President Biden opens up about the loss of his brother, Beau; his abuse of drugs and alcohol; and becoming the center of an election-year firestorm launched by his father's political opponents.
Read more

State Department issues another warning for U.S. citizens to...

CBS News' Charlie D'Agata is in Doha, Qatar, where many of the more than 100,000 evacuees have landed on their way out of Kabul.
Read more

How the famous piece of rock became the key to decoding Egyptian hieroglyphs.
Read more

Tyrrell Hatton brushed off Europe's Ryder Cup defeat to take a share of the lead on the opening day of the Alfred Dunhill Links Championship.
Read more

"When I looked at the information, I said, 'I don't think he did anything wrong,'" Pres. Trump said of Gen. Flynn at a White House press conference on Thursday. "If anything, he did something right... He was just doing his job."
Read more

A bird stars in rare feel-good tale about Afghan...

A small bird rescued from Kabul by a French diplomat is starring in a rare, feel-good tale about evacuations from Afghanistan
Read more

Exams have been cancelled for the second year running due to the impact caused by coronavirus.
Read more

Merriam-Webster says “culture” is Word of the Year

The dictionary publisher says it was one of the most frequently searched words on their website.
Read more

Leg-spinner Adil Rashid says he is not thinking about whether he will play Test cricket again and does not know if he will available for this winter's Ashes tour.
Read more

Wimbledon ‘confident’ more than 25% of fans can attend...

Wimbledon says it is "confident" more than 25% of fans will be allowed to attend when the tournament returns to the All England Club next month.
Read more

Weinstein has pleaded not guilty to the sexual assault charges against him in Los Angeles.
Read more

Reigning Champion Simona Halep Out of Wimbledon With Calf Injury

Southeastern parts of Louisiana could have power restored as...

Southeastern portions of Louisiana could have their power restored as late as Sept. 29, according to utility company Entergy. The news comes in the aftermath of Hurricane Ida, which made landfall...
Read more

The artist as searcher: Cézanne works on paper

More than 250 watercolors and drawings on paper, which reveal the French artist's revolutionary style, are featured in a landmark exhibition at New York's Museum of Modern Art, "Cézanne Drawing."
Read more

Newcastle United defend their lack of spending in the transfer window, saying that claims money has been taken out of the club are "wholly untrue".
Read more

Opinion | The Roots of Democratic Disarray

The party never actually agreed on an agenda, even as Biden moved aggressively with the slimmest of margins in Congress.
Read more

FEMA has funds to cover disasters — for now

The Biden administration is sitting on enough emergency funding to cover the "immediate" aftermath of a recent scourge of natural disasters, including the path of destruction left by Hurricane Ida, sources said Thur...
Read more

Israel's new Prime Minister, Naftali Bennett, has promised to unite a nation frayed by years of political stalemate. He succeeds Benjamin Netanyahu, who was forced out of office after 12 years. Also in the programme: The trial of Aung San Suu Kyi has begun i…
Read more

Capcom has confirmed Resident Evil Village is getting DLC and revealed when we'll finally get our hands on Resident Evil Re:Verse.
Read more

The White House on Thursday announced a number of new incentives from the private sector as it looks to increase Covid-19 vaccination rates among young people, a group it has specifically targeted as a high-priority demographic.
Read more

The House Ethics Committee announced Friday that it is upholding the $500 fines issued to a handful of GOP lawmakers who refused to comply with a requirement last month to wear masks on the House floor during the COVID-19...
Read more

Nearly 30 percent of Republicans say they won’t get...

Nearly 30 percent of Republicans say they are not planning to be vaccinated against COVID-19, ...
Read more

Bregman scores winning run in 10th as Astros down...

Alex Bregman had two hits and an RBI in his first action in more than two months, and he scored the winning run in the 10th inning on a groundout by Jake Meyers to lift the Houston Astros to a 6-5 win over the Kansas City Royals on Wednesday.
Read more

Taliban painting over western murals in Kabul, including George...

The Taliban have started painting over murals depicting western symbols throughout Kabul and other parts of Afghanistan.
Read more

‘Jury Still Out’ on Impact of Stimulus, Snap-on CEO...

The newly redesigned Mack Plant, part of the Stellantis Detroit Assembly Complex, is the first assembly plant built in Detroit in 30 years. Workers there are keeping quality in focus as they build the new generation of the Jeep Grand Cherokee.
Read more

Leicester City manager Brendan Rodgers explains why players James Maddison, Hamza Choudhury and Ayoze Perez were absent from the side in their 3-2 loss at West Ham
Read more

Fab 18 hit by gas contamination, but it’s not expected to have a ‘significant impact’ at this point
Read more

The best movies on Stan: a list of the...

Stan has a huge selection of movies to choose from, so we've taken the liberty of picking out some of the best ones for you.
Read more

Japanese carmaker Nissan and two partners have announced plans to invest 1 billion ($1.4 billion) pounds to produce a new model of an all-electric vehicle, and batteries, in northeast England
Read more

South Korea urges North to restore hotlines for any...

"Truth About Vaccines" channel had about 75,000 subscribers, with some videos getting over 1 million views.
Read more

Bentley’s New Steering Wheel Works in a Car And...

The steering wheel inside Bentley's Pikes Peak GT3 can be used on the hill climb then removed from the car and used for virtual racing video games. It's the first of its kind in the world.
Read more

How a Trillion-Dollar Coin Could Fit With ‘True Spirit’...

When the German chancellor steps down, how will history remember her? Four experts have their say.
Read more

General Motors is recalling more than 331,000 diesel pickup trucks in the U.S. for a second time because the engine block heater cords can short circuit and cause fires
Read more

The nationwide death rate has slowed to a level not seen since the early weeks of the pandemic – but unvaccinated people are still at risk as more contagious variants spread.
Read more

"I think it's a terrible shame. Anybody could have been hurt."
Read more

Hong Kong will shorten mandatory hotel quarantine to 14 days, down from 21, for people coming from low-risk areas including Singapore, Australia and New Zealand, as the city works to reopen its pandemic-battered economy.
Read more

Alibaba Group Holding Ltd. was the victim of a months-long web-scraping operation by a marketing consultant that siphoned up sensitive data including usernames and phone numbers, according to a court case that wrapped in June.
Read more

Democrats are bracing for battle as they try to unify their slim majorities behind a sweeping social spending package at the heart of President Biden's economic and political agenda.Democratic leaders are vowing to...
Read more

A hospital confirms it is investigating "an incident involving a patient in one of our theatres".
Read more

The Los Angeles City Council sent to Mayor Eric Garcetti a proposed law that would require proof of vaccination to enter restaurants, shopping centers and other locations. The Biden administration will announce a $1 billion purchase of rapid at-home tests.
Read more

The best Dragon Quest music, as composed by the...

Koichi Sugiyama, composer of the immensely popular Dragon Quest JRPG series, has passed away at the age of 90.
Read more

Dell XPS deals are slashing prices by up to...

Dell XPS deals are offering massive savings this weekend, with up to $700 off premium configurations.
Read more

The most prominent pharmaceutical executive to be criminally charged in the opioid epidemic is now free on bail. John Kapoor, founder of Insys Therapeutics, is accused of racketeering, conspiracy, fraud and other felonies. Prosecutors say Kapoor helped devise…
Read more

The discovery of exotic arachnids reveals as much about the structure of science as it does about the creatures.
Read more

After 11 bloody days, Israel and Hamas agree to a cease-fire. Also, a wildfire in Santa Barbara is threatening homes and other structures. All that and all that matters in today’s Eye Opener. Your world in 90 seconds.
Read more

Her comments came after Mr Salmond revealed he would be among the new Alba Party's regional list candidates.
Read more

The service has tasked its Office of Special Investigations to review all footage and social media posts pertaining to the episodes.
Read more

John Dickerson sits down with GOP presidential candidate Ben Carson to discuss campaign 2016, policing in America, and his strategy to take on the "loud speech" overpowering the campaign trail.
Read more

This is the first time the Queen has visited Scotland since Prince Philip's death in April.
Read more

They plan to sue Capitol Police for wrongful death. Ashli Babbitt was seen on video trying to climb through a broken window inside the Capitol when she was shot.
Read more

Dissident journalists Maria Ressa and Dmitry Muratov won the Nobel Peace Prize on Friday for their efforts to safeguard freedom of expression in the Philippines and Russia.
Read more

Neeraj Seth on the Markets (Radio)