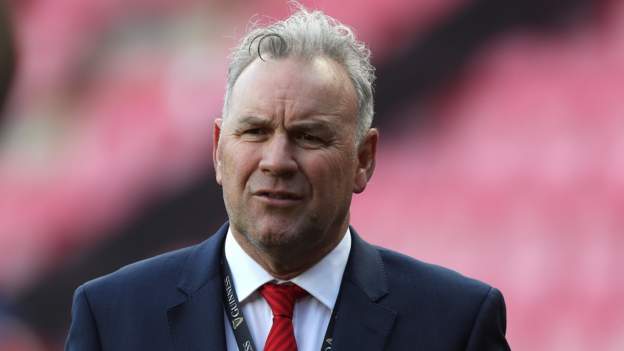 Wales will complete a Six Nations Grand Slam – their second in three years – if they beat Italy on Saturday and France the following weekend.

Victory against England secured Wales their fifth Six Nations Triple Crown – and on each of the previous occasions they have sealed the Grand Slam.

Wayne Pivac’s side have been clinical in attack and resolute in defence and start as overwhelming favourites.

The Azzurri have conceded 139 points and 19 tries in their three games this year.

Wales scrum-half Kieran Hardy injured his hamstring against England, and will be replaced by Scarlets colleague Gareth Davies in Rome.

The other change to the Welsh starting line-up sees lock Cory Hill replace Adam Beard, who is rested.

Lloyd Williams and Jake Ball have been named as replacements, with the latter in contention to win his 50th cap.

Italy welcome back scrum-half Stephen Varney, who was also selected to start against Ireland but withdrew after being injured in the pre-match warm-up.

The only other alteration to the back line sees wing Mattia Bellini replace Luca Sperandio, who is ruled out by a head injury.

There are three changes in the pack, with lock Niccolo Cannone and props Danilo Fischetti and Giosue Zilocchi all starting, meaning Marco Lazzaroni, Andrea Lovotti and Marco Riccioni drop to the bench.

There are also recalls for Oliviero Fabiani, Marcello Violi and Edoardo Padovani, who are named amongst the replacements.

Wales lead the Six Nations standings from France, whose game at home to Scotland was postponed because of a coronavirus outbreak in their camp

Sara Orchard: It is unthinkable Wales will lose to the Italians, who have been convincingly beaten in the first three rounds and continue to fuel the Six Nations relegation debate.

Arguably the result will be best judged by Wales’ defence and discipline, with tries aplenty already assured in the Rome sunshine.

View from both camps

Italy head coach Franco Smith: “We are meeting our goal to improve our performances, to become more and more competitive match after match.

“Every week together, staff and players, we work hard to win.”

Wales head coach Wayne Pivac: “There are two very important games to go, and it is about getting results.

“Don’t expect us to be throwing it around willy-nilly. We have got a job to do, and we have got to get on top of this Italian side before you see any of that sort of razzle-dazzle.” More than 60 years ago, Marion Gerald Hood was rejected from a medical school because of his race. This week, the school apologized.
Read more

Black Man Records Woman Who Allegedly Asked Him Why...

The woman falsely accused Joshua Black fit the description of an individual who was breaking into people's cars.
Read more

Ciattarelli and Christie: Still not cool together

Man shot in chest by police in Londonderry

The PSNI say an officer also sustained knife wounds to his arm and head during the incident.
Read more

Australia Test captain Tim Paine is confident he will be fit for the Ashes despite needing surgery to treat a pinched nerve in his neck.
Read more

Argentina launched  a "Green Mondays" campaign this week in order to cut greenhouse gases that are produced by cattle ranching.In an announcement posted to its website, the Environment Ministry f...
Read more

Trump’s rallies will remind everyone why he lost the...

Trump rallies will spread lies like him being reinstated in August -- but that will hurt the GOP and help Democrats as Americans are repulsed.
Read more

A New York State Assembly committee that is conducting an impeachment investigation into Democratic Gov. Andrew Cuomo publicly met with attorneys for the first time on Tuesday and promised a wide-ranging review of his conduct, with a scope that will go beyond…
Read more

Calls for Alex Jones’ Arrest Grow Louder After His...

Record-setting temperatures were recorded throughout the American Northwest on Monday, in some cases beating previous high temperatures observed only this past weekend, ...
Read more

Israel’s new government gets to work after Netanyahu ouster

Thousands of jobs in cybersecurity are open for the...

Most of the openings are in California, Florida, Texas and Virginia, and typical pay is between $60,000 to $90,000 annually.
Read more

Ben Domenech: Doing nothing is what the federal government...

Ben Domenech spoke out about what he believes is unprecedented incompetence in the federal government on 'Fox News Primetime.'
Read more

These are some of the very best Labor Day computer deals you can find right now, with massive discounts on desktops and laptops.
Read more

Democrats say there’s no time to wait on including...

Democratic lawmakers on Wednesday said it's time to tackle climate change through infrastructure as Congress moves toward action on two different proposals.Speaking at The Hill's "...
Read more

Chris Christie calls out Biden for being ‘wrong’ on...

Google Chrome now warns you if you’re about to...

Presented by Uber Driver Stories TGIF, Illinois. It wasnt tax day but April 15 still turned out to be crummy. Hoping for a peaceful...
Read more

Trump: Washington/Lincoln ticket would have had hard time beating...

Former President Trump said it would have been hard for a presidential ticket with George Washington and Abraham Lincoln running to beat him before the COVID-19 pandemic began."I think it would b...
Read more

DJI has announced three separate launches to take place over the next month, but what will it launch?
Read more

Dundee United have confirmed Thomas Courts as their new head coach, replacing Micky Mellon after his departure at the end of the season.
Read more

"Don't be scared to make an all-Black team representing the United States of America. I'm disappointed by that," Rose said.
Read more

Call for investigation of menstrual changes after Covid jabs

There is no evidence of any impact on fertility - but research will help to counter false claims.
Read more

Minnesota police have released images of a car they suspect has a connection to the deadly road rage shooting of a youth baseball coach who was gunned down on a U.S. highway with his son in the car.
Read more

The DJ says that when she reported the matter to police, officers laughed about what had happened.
Read more

The federal government has found that Americans prefer vaccination at pharmacies over expensive mega-sites.
Read more

The Ford Mustang Mach-E put in a poor performance on a benchmark evasive maneuver evaluation known as the "moose test" in Sweden.
Read more

Hong Kong is looking into making it easier for vaccinated residents to travel to encourage more people to get inoculated, Chief Executive Carrie Lam said in a statement on Saturday.
Read more

The head of the House Intelligence Committee on Tuesday warned that those who refuse to cooperate in Congress's investigation into the Capitol attack of Jan. 6 could face charges of criminal contempt.Rep. Adam Schi...
Read more

President Joe Biden’s Department of Labor officials met with business lobbying groups and leaders on Friday in an effort to gather support for upcoming rules mandating vaccines or tests at places of work.
Read more

The Best Cars We Saw at the IAA Mobility...

In the first big motor show since the pandemic hit, e-bikes, scooters, buses, and pods were so prevalent they almost crowded out the cars. Here’s what you need to know.
Read more

Some researchers are up in arms about a U.S. Census Bureau proposal to add privacy protections by manipulating numbers in the data most widely used for economic and demographic research
Read more

Black farmers facing ‘extinction’ fight for $5B in promised...

Congressional aid for disadvantaged farmers that was authorized earlier this year as part of President Biden's $1.9 trillion coronavirus relief law is being challenged in the courts by white farmers, preventing roug...
Read more

What’s at risk in the murky Capitol attack investigation

The FBI and the Justice Department couldn't be more opaque concerning the progress of the investigation, Joe Lockhart writes, and that lack of information has many concluding that nothing will happen.
Read more

The traditional bake rose to the top, beating a high number of vegan entries.
Read more

Bill Whitaker reports on the largest helicopter to ever fight fires at night, now being used in California as the state faces one of its most intense fire years ever.
Read more

Gas has been temporarily turned off at an apartment complex in Georgia where a building exploded last weekend and partially collapsed, sending four people to a hospital
Read more

Cuomo: New York will end most mask requirements for...

Congress is under new pressure to keep millions of Americans in their homes after the Supreme Court blocked the ...
Read more

Hurricane Henri’s Bearing Down on Long Island and New...

Henri remains a Category 1 hurricane and is expected to make landfall in southern New England or on New York’s Long Island around midday Sunday.
Read more

Hotels and theme parks are providing these activities for free, so the state is throwing in an additional $2,000 in cash for winners to cover the cost of travel.
Read more

The Vermont Independent, often depicted by the media and Republicans as well to the left of his party, is showing a conciliatory side.
Read more

An “anomalous surge” in DNS queries that came from all over the world forced more than a dozen cloud-based apps offline, including Teams.
Read more

The PM's ex-adviser apologises to the families of those who died unnecessarily for mistakes that were made.
Read more

Nick Tompkins: Wales centre back at Saracens after Dragons...

Wales centre Nick Tompkins returns to Championship side Saracens at the end of his loan spell with Pro14 club Dragons.
Read more

At least 11 people were killed Tuesday in a shooting at a school in southwest Russia, according to reports.
Read more

After Covid-19 shuttered galleries across the globe, the art world is staging a cautious reopening -- which includes a host of pandemic-friendly, open-air exhibitions.
Read more

Shawn Mendes brings a “Summer of Love” full of nostalgia in his new single, out today (August 20).
Read more

Louisville, Ky. (AP) -- Medina Spirit fought off three challengers in the stretch to win the Kentucky Derby by a half-length, making Bob Baffert the winningest trainer in the race’s 147-year history with seven.
Read more

California is one of the nation's most liberal states, where a Republican hasn't won a statewide election in 15 years
Read more

Did a young model jump off a mountain cliff or was she pushed? Her fiancé, accused of killing her, reveals the shocking final moments of her life in an interview with "48 Hours" correspondent Peter Van Sant.
Read more

Chrome for Android can now stop you getting Rickrolled - TechRadar

Raptor Lake could be Intel’s 13th-gen CPUs with a nice surprise for...