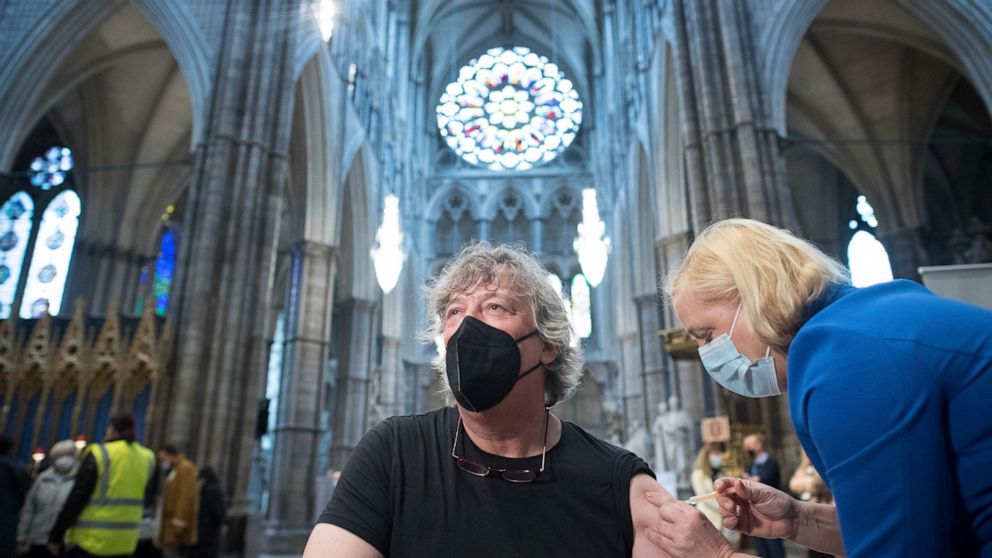 LONDON — The British economy shrank 2.9% in January as the nation was hit by a new round of coronavirus restrictions and Brexit slashed exports to the European Union.

The Office for National Statistics said Friday that the drop in gross domestic product was fueled by declines in retail trade and education as efforts to slow the spread of COVID-19 shut nonessential shops and schools across the U.K. Britains economy is about 9% smaller than it was before the coronavirus pandemic began in February 2020, the ONS said.

Exports of goods to the EU plunged almost 41% in January, while imports from the bloc dropped 28.8%, the ONS reported.

Britains decision to leave the EU ended more than 40 years of free trade with the 27-nation bloc and its 450 million people. Shipments between Britain and the EU are now subject to tariffs, border checks and increased paperwork that have curtailed trade. Alex Wolf on the Markets (Audio)

Rand Paul says he won’t be vaccinated since he...

Paul was the first-known senator to be diagnosed with COVID-19 when he contracted the virus in March 2020.
Read more

Overnight fire at Tesla gigafactory site in Germany under...

An overnight fire at the construction site for the Tesla gigafactory in Germany is under investigation after a letter from far-left activists took credit for it.The fire was started early Wednesd...
Read more

For Eric Greitens and Mo Brooks, Ambitions at Last...

The newest entrants to the Missouri and Alabama Senate races have been plotting this course for years.  The post For Eric Greitens and Mo Brooks, Ambitions at Last Indulged appeared first on The American Conservative.
Read more

How the fall of Kabul stunned the Biden administration and spawned the worst week of his presidency.
Read more

Iowa was in victory formation and the emotion was about to spill over as dusk settled over Kinnick Stadium.
Read more

US hospitals hit with nurse staffing crisis amid COVID

The COVID-19 pandemic has created a nurse staffing crisis that is forcing many U.S. hospitals to pay top dollar to get the help they need to handle the crush of patients this summer
Read more

TechRadar can exclusively confirm that the Realme Buds Q2 will have a label price of Rs 2,499 in India, ahead of its launch.
Read more

The vice president told potential migrants not to come to the U.S. on a visit to Guatemala on Monday.
Read more

A sharp rise in coronavirus cases from new variants in parts of Southeast Asia that had been less affected by the pandemic has prompted new restrictions, factory closures and attempts to rapidly scale up vaccination programmes across the region.
Read more

Federal agency says employers can offer incentives to get...

The U.S. federal agency responsible for overseeing the protection of civil rights and prevention of discrimination in the workplace said in updated guidance Friday that employers may legally offer incentives for wor...
Read more

Tommy Manzo is being accused of hiring someone to beat and rob Dina Manzo and her then-fiancé David Cantin.
Read more

The deadline passes for those wishing to stand in the Scottish Parliament election on 6 May.
Read more

The Prince of Wales was asked about his father during a visit to Finsbury Park Mosque.
Read more

Erin Browne on the Markets (Radio)

Remains of Confederate general and his wife being removed...

Crews have started to remove the remains of Confederate General Nathan Bedford Forrest and his wife from a Memphis park where a monument of him once stood.
Read more

Colbert confirms he was disinvited from Obama’s 60th

Stephen Colbert is confirming that got cut from former President Obama's birthday party guest list, joking that "in the massive 'scaling back,' I got massively scaled."The CBS "Late Show" host detailed the birthday...
Read more

Library devoted to Japan novelist Murakami to open in...

A library devoted to Japanese novelist Haruki Murakami’s writings, scrapbooks and record collection opens next week in Tokyo for research, cultural exchange and a gathering spot for his fans
Read more

The Queen has been visiting the Royal Navy flagship, HMS Queen Elizabeth, in Portsmouth.
Read more

A Florida diner that posted a sign telling Biden supporters to take their business “elsewhere” was forced to temporarily close after not having enough food to meet a surge in demand.
Read more

Air Canada on Wednesday joined other major airlines in implementing a vaccine mandate for its employees, giving workers until the end of October to get fully vaccinated or risk losing their job. ...
Read more

Flags flew at half-staff at the Brooklyn Police Department in Illinois on Wednesday following the death of a police officer who authorities say was trying to stop a driver from eluding capture.
Read more

The United Nations is raising the alarm about a Taliban crackdown on peaceful protests, many of them by women demanding equal rights, and journalists covering such events
Read more

Some Haitians turn to prayer after president’s assassination

Many remote employees aren’t playing safe with their passwords

Employees are failing to take password security seriously despite the increased risk from cyberattacks during the pandemic.
Read more

What will James Comey’s testimony to Congress reveal?

Former FBI Director James Comey is expected to appear before the Senate Intelligence Committee next month. Benjamin Wittes of Brookings Institution offers insights into the Russia investigation and the former FBI Director ahead of his testimony.
Read more

Judith Miller: Is Iran’s Supreme Leader near death? Why...

American and Israeli Intelligence analysts have been debating the state of the Iranian political and spiritual leader’s health since Khamenei posted a tweet Wednesday asking supporters to pray for him.
Read more

TLC released a teaser clip that shows the wives quarantining separately from each other during the coronavirus pandemic while Kody Brown travels back and forth between houses.
Read more

FOX News Rundown Extra: The GOP Case On How...

Republicans on the House Foreign Affairs Committee recently released the latest report from their investigation into the origins of COVID-19, further bolstering the theory that the virus came from a leak at the Wuhan Institute of Virology. The report outlined…
Read more

Mother designs cards for babies of colour due to...

Deborah Ajaja struggled to find milestone cards that matched her child’s heritage, so she created her own.
Read more

US Open male ‘streaker’ takes a swing on course...

The final round of the 2021 U.S. Open at Torrey Pines featured a lot of movement at the top of the leaderboard on Sunday.
Read more

Matthew Quaife on the Markets (Radio)

Sen. Richard Blumenthal (D-Conn.) announced on Thursday that nearly 800 people who had been stranded in Mazar-i-Sharif, Afghanistan have safely arrived in Qatar.The Senate Democrat said that two planes, which...
Read more

Premier League summer signings: Who are this weekend’s potential...

BBC Sport looks at some of the Premier League summer signings who could make their debuts this weekend.
Read more

A Washington D.C., police officer has been indicted for the murder of a man on a moped who was fatally struck by a vehicle during a 2020 chase and conspiring with another officer to hide the circumstances of the collision, federal prosecutors said.
Read more

Dozens of California students, parents stranded in Afghanistan after...

Dozens of California students and parents are stranded in Afghanistan after taking a summer trip to the country.More than 20 students and 16 parents traveling from the Cajon Valley Union School District in El Cajon...
Read more

Are the Memorial Day sales worth it&quest; We analyze...

The U.S. is slowly but surely diverting its focus from the Middle East to the Indo-Pacific. For leaders like Mohammed Bin Salman and Mohammed Bin Zayed who are used to being catered to by the U.S., times are changing.
Read more

Edwin Poots and the DUP facing big questions after...

The DUP's new leader decided against speaking to the media - so here's what we would have asked him.
Read more

How Rosenwald schools transformed African-American education in the rural...

A German privacy regulator banned Facebook on Tuesday from gathering data on WhatsApp users, citing an update to its privacy policy that breaches stringent European data protection rules by allowing access to a lot more information on the chat app’s users
Read more

The New York International Auto Show, which had been scheduled to open to the public in just two weeks, has been canceled due to concerns about the Covid-19 Delta variant and the steps being taken to prevent it.
Read more

Dundee United have confirmed Thomas Courts as their new head coach, replacing Micky Mellon after his departure at the end of the season.
Read more

Facebook oversight board member on Capitol rioters: Trump was...

A member of Facebook's oversight board said Sunday that despite former President Trump's calls for peace during the Jan. 6 riot, he was encouraging a mob of his supporters that overtook the Capitol in statements on social...
Read more

PS Plus free games for June include another brand...

Dogfight in the stars and hack your way to victory with the free PS Plus games in June 2021.
Read more

President Biden is touring the damage caused by Hurricane Ida in New Jersey and New York on Tuesday – a storm which left at least 50 dead in the northeast and caused historic flooding in the region.
Read more

WIN: Get a free Google Stadia controller and Chromecast...

The OnePlus 9 and OnePlus 9 Pro are two of the best phones of the year so far. And buying one just got even more appealing.
Read more

What’s a party caucus chair worth?

So, being a House caucus chair is not the dead-end post some would make it out to be; but neither is it a sure ticket to the next wrung on the leadership ladder.
Read more

O2 has had the same EU data limit on its unlimited plans.
Read more

Chuck Grassley is the octogenarian everyone’s waiting on

If Iowa's incumbent senator runs for reelection in 2022, the seat is safe for Republicans. If he retires, they'll have a battle on their hands.
Read more

How to control your personal info on Google

This program looks at the unique challenges facing male and female veterans as they transition from military to civilian life.
Read more

Half of Wisconsin’s Black Neighborhoods Are Jails

President Biden on Wednesday will outline the American Families Plan, an ambitious package that would call for $1 trillion in new spending and $800 billion in new tax cuts and aim to significantly expand access to prescho...
Read more

EssilorLuxottica SA is pushing ahead with the sale of some optical retail businesses in Italy, the Netherlands and Belgium to meet antitrust requirements for its purchase of GrandVision NV, according to people familiar with the situation.
Read more

Norway has warned Rolls-Royce Holdings Plc that a planned sale of Norwegian assets to a Russian company may pose a national security risk, as it considers halting the deal.
Read more

Three 5G rollout will be affected if mast sale...

CK Hutchison wants to sell its European masts to Cellnex but the CMA has competition concerns.
Read more