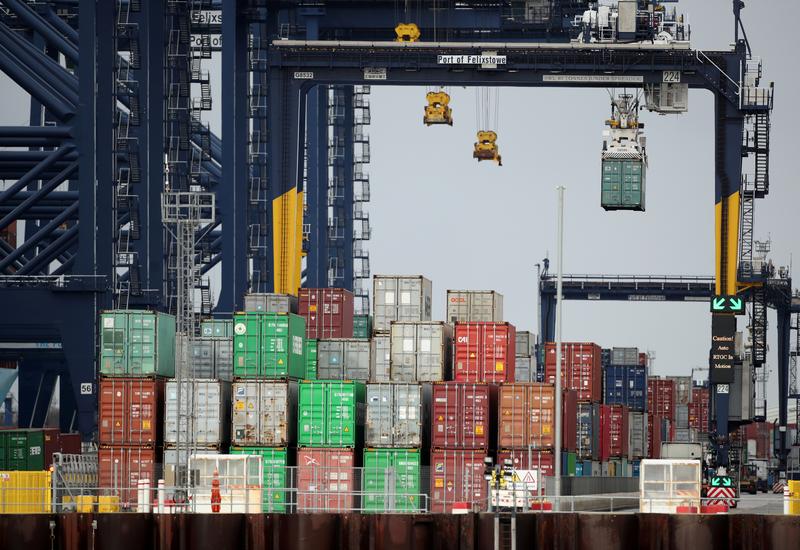 LONDON (Reuters) – Exports and imports from Britain to the European Union plunged during the first month of the countrys new trade relationship with the bloc, according to data published on Friday with some heavy caveats.

Exports of goods to the EU, excluding non-monetary gold and other precious metals, slumped by 40.7% in January, the Office for National Statistics said. Imports fell by 28.8%

The ONS had previously warned that the hit to trade from the COVID-19 pandemic would make it difficult to identify a Brexit impact from new customs arrangements in Januarys data.

But it said there were signs that this hurt trade at the start of the year.

External evidence suggests some of the slower trade for goods in early January 2021 could be attributable to disruption caused by the end of the transition period, the ONS said.

It said the weak figures likely reflected a lull after stockpiling in November and December ahead of the end of the Brexit transition period and it also pointed to a new national coronavirus lockdown in Britain that started in January.

All of these are potential contributing factors to the fall in January trade in goods, the ONS said. Dubai is building an art collection — without buying...

Dubai is putting together its first institutional art collection, and it will do so by borrowing artworks.
Read more

The judge said Bradley Dawes' actions were "motivated by his hostility towards women".
Read more

Fireworks to return to DC’s National Mall for July...

Fireworks are returning to the National Mall for the Fourth of July, in what organizers say will mark "an important step forward as the city emerges from the pandemic."The iconic July 4 light show in the nation's c...
Read more

Organisers show off Olympic village a month before Games...

Organisers of the Tokyo Olympics opened the athletes' village to the media on Sunday, showing off apartments and a timber-laced shopping plaza where 11,000 athletes would stay and mingle during the sporting extravaganza.
Read more

Alexandra Huỳnh steps into Amanda Gorman’s shoes with a...

Multiple content creators on the video platform have been sharing theories and tracking every development in the case in viral videos.
Read more

The Chinese smartphone maker Motorola has teased the launch of the Edge 20 series in India via its official social media handles.
Read more

Inflation at the Ballot Box

Hello. Today we look at the role inflation is playing in various national elections, the upcoming week in central banking and the new paper on debt from Carmen Reinhart and Kenneth Rogoff.
Read more

India’s IT rules: Why the government is gunning for...

Tensions are growing between the government and Twitter over new digital media rules.
Read more

How to help, volunteer and honor 9/11 victims through...

Twenty years ago, terrorists seized control of four airliners, killed 2,977 people and shook the national conscience of the United States. But the attacks of 9/11 also aroused a sense of patriotism, duty and civic resolve not seen in generations. In the two d…
Read more

Wisconsin Gov. Tony Evers slammed state Republicans on Monday over plans to spent $680,000 on an investigation into the 2020 election, saying that Assembly Speaker Robin Vos of "drinking the Kool-Aid" after a recent meeti...
Read more

Match of the Day analysis: How Liverpool sealed Champions...

US innovation and manufacturing is vital for national and...

Indiana is ready to compete, collaborate and lead in addressing this national need. We just need Congress to enact legislation as soon as possible, send it to the president’s desk, and states like Indiana will make you proud.
Read more

Police: Man who killed 3 had history of police...

Francisco Lindor hit a two-run homer in the ninth inning and the New York Mets, after blowing a nine-run lead, extended their winning streak to six by beating the Washington Nationals 11-9 Saturday to open a split doubleheader on Saturday.
Read more

Booker’s triple-double leads Suns to game one win over...

Devin Booker posts his first career triple-double as the Phoenix Suns beat the Los Angeles Clippers 120-114 in game one of the Western Conference finals.
Read more

Vice President Harris on Saturday reflected on the courage and unity of the passengers of Flight 93 that crashed near Shanksville, Pa., on Sept. 11, 2001, calling on Americans to honor the lives lost during the terror att...
Read more

In a disturbing look at hidden dangers on highways across the country, a “CBS This Morning” investigation reveals how bus and truck drivers can hide medical conditions that should keep them off the road. Kris Van Cleave reports on the federal oversight of com…
Read more

A House panel on Tuesday approved amendments to repeal the 2001 and 2002 war authorizations, the latest move in a push to rein in presidential war powers that has been gaining momentum in recent months.The House Ap...
Read more

A man suspected of shooting two people, killing one, inside a Southern California movie theater has been charged with murder and attempted murder
Read more

Taxpayers and patients cannot afford to pay a high price for a treatment not known to be effective.
Read more

Israel's foreign minister landed in the United Arab Emirates on Tuesday in the first official visit by an Israeli minister to the Gulf state since the two countries established diplomatic relations last year.
Read more

Rep. Michael Waltz, R-Fla., lambasted President Biden on "Hannity" Friday for waiving sanctions on Russia’s Nord Stream 2 pipeline after blocking the Keystone Pipeline, and getting nothing in return.
Read more

One of the Apple Watch’s slickest features isn’t working...

Apple Watch’s unlock iPhone feature isn’t working for all iPhone 13 users, and there’s no telling when a software fix is incoming.
Read more

Celtic will host Hearts in the second round of the Scottish League Cup while holders St Johnstone visit Arbroath.
Read more

In her "Ingraham Angle" commentary on Tuesday, Fox News host Laura Ingraham warned viewers of the Biden administration's efforts to use the federal government to intimidate political opponents.
Read more

A Washington State football player was wounded and another person killed in a shooting early Saturday near the school’s campus.
Read more

The Coast Guard says an abandoned oil pipeline has leaked a 4-mile wide slick onto a beach north of Santa Barbara, California. CBSN's Jeff Glor spoke with a KCBS chopper crew about what they were seeing Tuesday evening.
Read more

Jordan Binnington, who sparked the St. Louis Blues in net on their way to their first Stanley Cup, will be around for the long haul.
Read more

Wellington, New Zealand (AP) -- New Zealand authorities imprisoned a man inspired by the Islamic State group for three years after catching him with a hunting knife and extremist videos — but at a certain point, despite grave fears he would attack others, the…
Read more

Will NBA team owners force Sterling to sell the...

A committee of 10 NBA team owners will discuss Donald Sterling's future after his lifetime ban for racist comments. CBS News' Carter Evans reports on the pressure to force the LA Clippers owner to sell the team.
Read more

Oldest U.S. veteran of WWII does it up big...

The Alabama Crimson Tide and LSU Tigers are used to playing for an SEC title in football but the rivalry between the two schools reared its head Sunday as the teams competed for a men’s basketball title.
Read more

Moto G60 leaks suggest it will be another impressive...

We can add another Moto G series phone to the list of handsets that we're eagerly awaiting in 2021.
Read more

The streamer has removed certain movies from kids profiles, including The Aristocats.
Read more

Former House Speaker Paul Ryan is weighing in on the fight for the Republican Party’s future and he's urging conservatives to reject Donald Trump and “second-rate imitations.”
Read more

Five asteroids are zooming past Earth this week

It's not the only one — five asteroids total are expected to zoom past our planet on Tuesday and Wednesday alone.
Read more

Dell XPS deals are slashing prices by up to...

Dell XPS deals are offering massive savings this weekend, with up to $700 off premium configurations.
Read more

Microsoft Corp (MSFT.O) has won U.S. antitrust approval for its deal to buy artificial intelligence and speech technology company Nuance Communications Inc (NUAN.O), according to a filing made by Nuance to the government.
Read more

A Bald Man Loses His Toupee

The Australian submarine deal left France in the dust, but the French may have some wisdom for us about meddling abroad. The post A Bald Man Loses His Toupee appeared first on The American Conservative.
Read more

Congress is no closer to a bipartisan funding deal that would stave off a government shutdown in two months.
Read more

Taliban capture third Afghanistan capital in as many days

The Taliban have seized a third capital in Afghanistan in as many days as the group continues to make aggressive and significant gains in the wake of the U.S. military withdrawal.
Read more

A man who was hospitalized with COVID-19 was released Friday after more than 6 months, ...
Read more

"Evil is a kind of state of mind that, probably, all of us can get into at some point or other," says Dr. Gwen Adshead.
Read more

The Delta Variant Has Warped Our Risk Perception

The top Republican on the Senate Intelligence Committee is calling on the director of national intelligence to investigate allegations that the federal government "unmasked" Fox News host Tucker Carlson.In a letter...
Read more

House Speaker Paul Ryan joins "CBS This Morning" from Washington to discuss how the historic Republican tax reform bill will bring "real relief" to people living paycheck to paycheck, and addresses rumors that he will leave his job.
Read more

Saturday is the brand new ‘unofficial’ start to hurricane...

After a record-breaking Atlantic hurricane season last year, storm forecasting will get off to an earlier start this year thanks to consecutive years of pre-season activity.
Read more

All 57 people aboard a bus traveling to Niagara Falls were injured Saturday when the vehicle crashed near Weedsport in central New York state.
Read more

The British government's plans to build a 200 million pound ($276.3 million) successor to the Royal Yacht Britannia, which was retired in 1997, are a good idea, Business Secretary Kwasi Kwarteng said on Monday.
Read more

A particularly stubborn python hiding inside the wall of a home in Queensland gave this snake catcher some trouble before it was safely removed.
Read more

This week, Jason draws on his experience in Congress to state what he believes the Biden Administration is doing wrong in their negotiations with Congress. He continues to elaborate on his concern with the growing national debt and then brings on the stupid w…
Read more