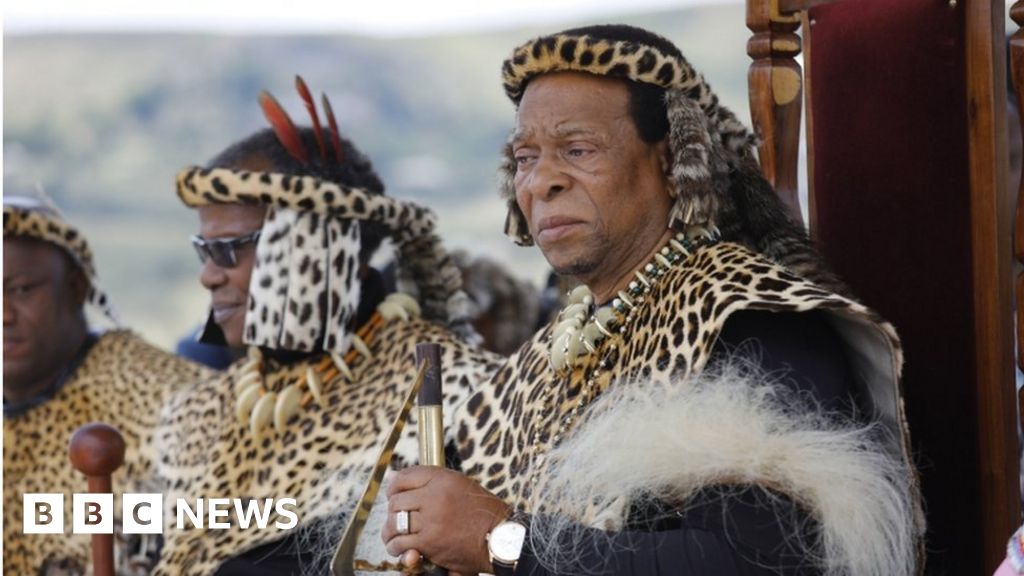 King Goodwill Zwelithini of the Zulu nation in South Africa has died in hospital where he was being treated for diabetes-related issues.

The king, 72, was the leader of South Africa’s largest ethnic group and an influential traditional ruler.

He had been admitted to hospital in KwaZulu-Natal last week to monitor his ongoing diabetes condition.

The king’s prime minister thanked South Africa for its “continued prayers and support in this most difficult time”.

King Goodwill Zwelithini had ruled the Zulu nation under the Traditional Leadership clause of South Africa’s republican constitution since the death of his father in 1968. ‘Tax the rich’ plans at risk as Democrats’ talks drag on

To get a sense of just how quickly corporate America has bounced back from the pandemic, consider this: for the first time since January 2020, U.S. bankruptcy courts saw no large Chapter 11 bankruptcy filings last week.
Read more

Out of sight but center stage, jurors weigh Chauvin’s...

The jurors who sat quietly off-camera through three weeks of draining testimony in Derek Chauvin’s murder trial in George Floyd’s death moved into the spotlight Tuesday, still out of sight but now in control of verdicts awaited by a skittish city
Read more

How to be more aware of your digital trail

The Sony Pictures hack has revealed just how controversial and embarrassing private emails can be once they've been made public. CNET editor Dan Ackerman joins "CBSN" with more why it's important to be more aware of your digital trail from now on.
Read more

Amazon Prime Day has come early for those after the Echo Buds headphones - now available for their lowest ever price.
Read more

Delivery Hero Is Said to Invest in Gorillas at...

Richmond’s Robert E. Lee statue to be removed on...

Richmond's statue of Gen. Robert E. Lee - the largest remaining Confederate statue in the country and a divisive symbol in a city where a number of similar statues have already been removed - will be taken down on Wednesd...
Read more

Kanye West’s $1M Yeezys may be the world’s most...

Valued at over $1 million, the first Yeezys worn in public by Kanye West will be among the most expensive sneakers ever to appear on the market, according to Sotheby's auction house.
Read more

We asked an expert to redesign GoDaddy – here’s...

A design expert from Fiverr has given the GoDaddy interface a makeover.
Read more

Koch Media's announced its new premium gaming label Prime Matter today along with 12 new titles that it will be releasing in the future.
Read more

The country is on track for a record year of IPOs with the success of startups like Zomato.
Read more

Extreme heat in the West could break 200 records...

Dozens of daily record highs were on Monday as highs soared into the triple digits across cities in the Western-third of the country, stretching all the way north to the Canadian border.
Read more

Seven people at a German university had to seek medical attention on Tuesday after exhibiting symptoms of poisoning, according to The ...
Read more

Prime Day sales are offering some excellent gaming deals right now, with big discounts on everything from accessories to titles.
Read more

A mission from the Organization of American States has arrived in Haiti amid concerns about the country’s political, security and human rights situation
Read more

Meet cast members David Smith, a merchandise host at World of Disney and Jr. Martinez, a Guest Relations Host. While they work in different departments, they have one very important thing in common: they both can communicate through American Sign Language. Da…
Read more

Passengers aboard the flight said the man made an announcement over the plane's PA system telling the passengers to take their seats and prepare to put on their oxygen masks.
Read more

Kits were sold to the Department of Defense and at major retailers including Amazon, CVS, Target and Walmart.
Read more

“I couldn’t give up” says sister of wrongfully-convicted man

Roosevelt Glenn's sister, Renitta, and brother-in-law Lorenzo show Glenn all the files they kept throughout the years as they fought for his freedom
Read more

Man jumps through window to stop dangerous car in...

A suspect was arrested after breaking through barriers in Tirana's Skanderbeg Square.
Read more

Police in Colorado Springs, Colo., are searching for a motive in a mass shooting at a birthday party that left seven people dead on Sunday, ...
Read more

Biden to double down on vaccine requirements during visit...

Biden's goal is to show that vaccine mandates, which have sparked outcry among the anti-vaccine factions on the right, are working — from both a public health perspective and an economic one.
Read more

The ‘birth of the racial caste system’ started in...

The Dominican Republic's history of racism against neighboring Haitians and its current impact is the focus of "Stateless," a documentary by Michèle Stephenson.
Read more

GOP to Offer Biden Near $1 Trillion of Spending...

More than 30 U.S. trade groups called on the Biden administration to resume negotiations with China and remove tariffs, which they say are harming the American economy.
Read more

Tensions emerged in Minneapolis on Thursday evening after police fatally shot a suspect while attempting to serve an arrest warrant. Members of a U.S. ...
Read more

Spencer Stone arrived at an air base in northern California Thursday night to a cheering crowd. The U.S. airman and other passengers are credited with subduing the gunman and saving lives. Steve Large of CBS Sacramento station KOVR reports.
Read more

Speaker Nancy Pelosi's office is denying a claim by a former President Trump aide that the California Democrat once accused the White House of bugging her phone following a tense meeting with the then-commander in chief....
Read more

Biden and Harris to meet with Asian American leaders...

Hong Kong’s leader says her government is “highly concerned” about the situation at a nearby nuclear power plant in mainland China, following media reports that the plant could be experiencing a leak
Read more

The Unvaccinated Are a Risk to All of Us

In this week's edition of the Covid Q&A, we look at the impact unvaccinated people are having on the pandemic. In hopes of making this very confusing time just a little less so, each week Bloomberg Prognosis is picking one question sent in by readers and putt…
Read more

Microsoft has warned Insiders that experimental builds will be released into the Dev channel, but some users have found they're unable to switch.
Read more

Workers of Italy Unite Under One Covid Pass: Brussels...

Welcome to the Brussels Edition, Bloomberg’s daily briefing on what matters most in the heart of the European Union.About 18 million workers in Italy will be required to hold a Covid passport, the first such measure in the EU as Prime Minister Mario Draghi mo…
Read more

Student Graduates Without Missing a School Day Since Starting...

Blake Wolfe, from Ohio, has completed an estimated 2,184 days of school since he began kindergarten in 2009.
Read more

A building has partially collapsed in Miami and has prompted Miami-Dade Fire Rescue to send 80 units to respond to the scene.
Read more

Today is a big day for New Yorks Citys new normal. Its the first day of school and the first time in a...
Read more

Officials in New Zealand are preparing to launch a pilot program to allow residents returning from overseas trips to quarantine at home instead of state-operated facilities.Prime Minister Jacinda Ardern on Monday o...
Read more

Season 17 is now streaming on Netflix, and fans who have been waiting to binge the whole thing are about to see some beloved characters return.
Read more

E.U. to Abolish All Country Exemptions for Vaccine Export...

‘Young, black people have to work three times as...

Vice President Kamala Harris issued cautionary remarks directed people who may seek to illegally immigrate to the US through the southern border, which Greg Gutfeld commented that those remarks would be considered racist during the Trump administration on "Th…
Read more

South Africa will be bringing back strict COVID-19 restrictions to combat the most recent surge in cases believed to be driven by the more infectious delta variant....
Read more

JD Logistics will price its shares between $HK39.36 and $HK43.36 each as the company aims to raise up to $3.4 billion, according to the company's filings.
Read more

The federal government will issue cybersecurity regulations in the coming days for U.S. pipeline operators following a ransomware attack that led to fuel shortages across much of the Eastern Seaboard
Read more

India's prime minister is pushing ahead with a $1.8 billion revamp of the parliament building amid record-breaking numbers of coronavirus cases in the country. Prime Minister Narendra Modi's mamm...
Read more

James Corden tells Bill Whitaker what he would have done differently in school, what he's optimistic about, and the thing he thinks more people should know.
Read more

New Jersey Gov. Chris Christie commended the president for his declaration of a public health emergency on opioids Thursday. But is this declaration really what he wanted? GQ magazine political correspondent Jason Zengerle joined "Red and Blue" to break down …
Read more

The Samsung Galaxy Tab S6 drops to a new...

Brazilian President Jair Bolsonaro said on Sunday he was not allowed to attend a league match between Santos and Gremio because the home club did not allow unvaccinated supporters into their stadium.
Read more

Protesters are calling for the prime minister's resignation after the death of Lekso Lashkarava.
Read more

Oliver George West, 31, stole the battery from the scene of the crash and took it home.
Read more

Presented by Pre-K Our Way Good Monday morning! At an event Friday, Gov. Phil Murphy ensured that the mask debate will go on. Despite CDC guidance...
Read more

Making a teacher fear for their safety is "unacceptable", the equality commission chair says.
Read more

Pitbull, the Grammy-winning musician, took to Twitter on Wednesday to urge his 25 million followers to support the historic protests that have broken out in Cuba, which has been under communist rule for decades.
Read more

The share of single people in the U.S. has grown over the past three decades
Read more

Netflix has bought Night School Studio, the developer of games like Oxenfree and Afterparty.
Read more

US decides against plan to use military bases in...

The U.S. has reportedly decided against using its military bases in South Korea and Japan to temporarily house Afghan refugees.One source with close knowledge of the matter told ...
Read more

For nearly a decade, a Japanese hotel has been giving bus tours to show visitors the history of the massive earthquake and tsunami that hit Japan’s northern Pacific coast in 2011. The 9.1 magnitude earthquake and the tsunami it generated on March 11, 2011, k…
Read more