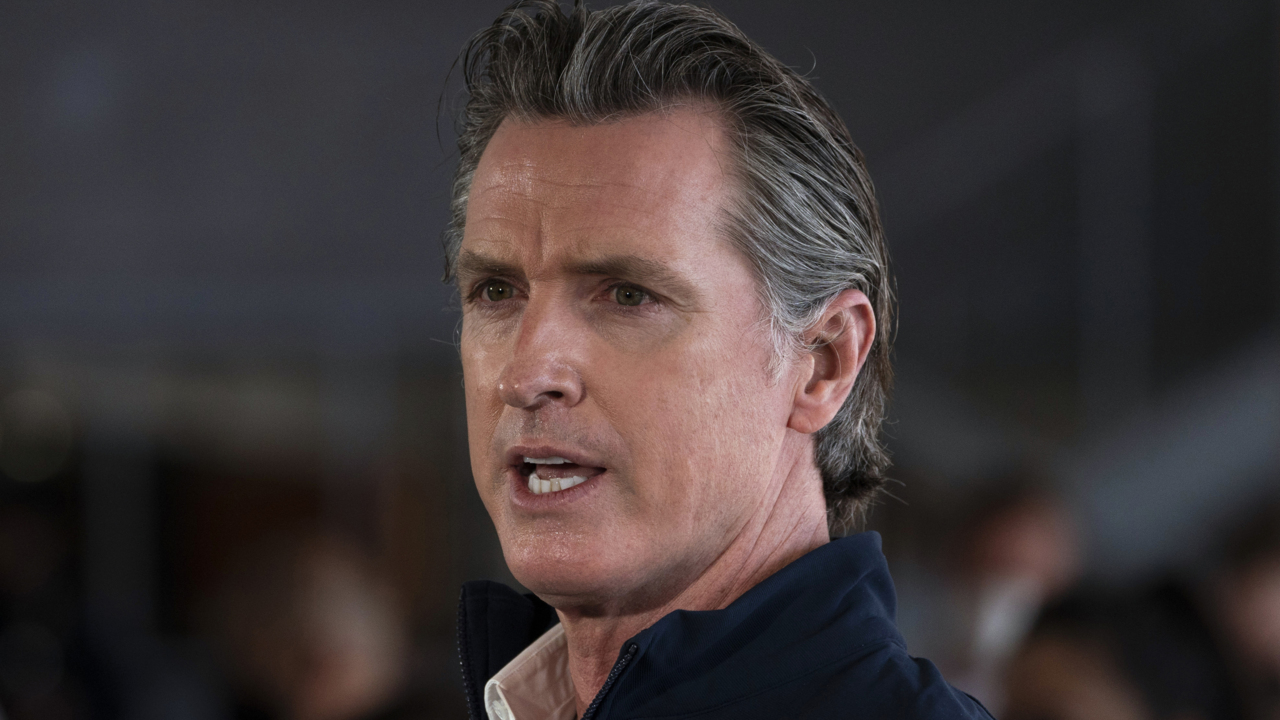 California Gov. Gavin Newsom has added to his staff a proponent of “guaranteed income” as an economic adviser, according to reports.

The new hire is Michael Tubbs, 30, a former mayor of Stockton who drew national media attention for providing $500 a week to some of his citys low-income residents.

“I can think of no one more dedicated or better equipped to make recommendations to my team and help lead outreach efforts to increase opportunity and entrepreneurship to reduce poverty in California,” Newsom said in a news release announcing the hire.

FAULCONER: CALIFORNIA’S NEWSOM IS ‘BOTCHING THE BASICS,’ RECALL WILL ‘CONTINUE TO GROW’

Tubbs, who was raised by a single mother because his father was in prison for much of his childhood, was elected to Stocktons city council at age 22 and became mayor at 26, according to The Associated Press.

He soon enacted a privately financed program through which 125 low-income city residents received $500 a month for two years. Data released last week showed most of the people used the money to pay off their debts and help themselves find full-time employment, the AP reported.

But Tubbs lost his reelection bid last November, defeated by Kevin Lincoln, a Republican who served in the U.S. Marine Corps.

Tubbs will join the Newsom administration as the Democrat fends off a recall effort that will likely send voters to the polls later this year to decide his fate.

Newsom, a former mayor of San Francisco, has drawn ire from many state residents over his handling of the coronavirus, including stay-at-home orders and business shutdowns.

The recall effort has attracted more than 1.5 million signatures, more than enough needed to force a recall election, Politico reported.

In his new unpaid role, Tubbs will assist Newsom in revising the states economic policies, possibly including “guaranteed income” for some residents, the Sacramento Bee reported.

In recent months California policies have prompted both residents and businesses flee to other states, such as Texas, Florida and Arizona, CNBC reported.

The efforts would be intended in part to address inequality and systemic racism issues, the report said.

Tubbs currently heads Mayor for a Guaranteed Income, an alliance of 40 city leaders pushing for guaranteed income programs around the U.S., the Bee reported.

The Associated Press contributed to this story. Aaron Leventhal hopes this will encourage others to seek help, rather than bottle it up.
Read more

State of the Union 2015: The Republican response

Jurgen Klopp calls for people in power to "find solutions" to the problem of international call-ups during the Covid-19 pandemic.
Read more

An extensive Washington Post fact check into the background of Sen. Tim Scott (S.C.), the only Black Republican in the Senate, has drawn fire from critics on the right an...
Read more

Emergency services were alerted to the blaze on Finavon Terrace in Dundee on Sunday morning.
Read more

President Biden’s plan to evacuate tens of thousands of Afghans who assisted U.S. military efforts in the country has left lawmakers and advocates with a number of unanswered questions as time dwindles amid the U.S. withdrawal.The White House...
Read more

Office Workers Don’t Want to Return and Microsoft Has...

Companies that benefitted from remote work now want to connect employees back in the office with those who stay home.
Read more

US, 20 other nations call on Taliban to ‘guarantee’...

The U.S. and 20 other nations are calling for the protection of freedoms for women and girls in Afghanistan who are now under the control of the Taliban."We are deeply worried about Afghan women and girls, their ri...
Read more

Moderna, J&J Make Case for Covid Boosters Ahead of...

Moderna Inc. and Johnson & Johnson said that data theyve gathered supports the need for booster shots for their Covid-19 vaccines, ahead of...
Read more

Russia condemns a decision to avoid Belarusian airspace over the arrest of a dissident journalist.
Read more

Matt Girvan hiked a trail which runs the length of Scotland - then had to walk even further when his ferry was cancelled.
Read more

England Faces Up to 200 Daily Covid Deaths When...

England is facing multiple “major risks” after pandemic restrictions are lifted next week -- including hospitals coming under intense pressure, a new vaccine-resistant variant emerging, and as many as 200 Covid-19 deaths per day.
Read more

Texas will gain the most new seats in the U.S. House of Representatives under new Census numbers released Monday, while states in the Northeast and Midwest will lose seven seats, shifting some political clout to Republican strongholds before the 2022 midterms.
Read more

John Legend reveals how Chrissy Teigen is doing amid...

Chrissy Teigen admitted to being a troll on the internet, writing mean comments, and insisted she's a changed person.
Read more

Nottinghamshire and Derbyshire lose Dan Christian and Ben McDermott respectively for the T20 Blast after call-ups by Australia.
Read more

Republican lawmakers from Pennsylvania are calling for their state to conduct an Arizona-style election audit of the 2020 presidential election, ...
Read more

Get to know all five teams in the National League Central before the first pitch is thrown in 2021.
Read more

Daniel Craig finally got a star on Hollywood's Walk of Fame on Wednesday, days before his last movie as James Bond opens in the United States.
Read more

Lawmakers are eager to return to the joys of everyday life post-pandemic after a year of social distancing and overall uncertainty caused by the coronavirus.Thursday marks the one-year anniversar...
Read more

Parents worried about Covid in schools have an easy...

Fresh air, better ventilaton and even equipment such as air filters can help make schools safer against Covid-19 outbreaks by removing infectioius coronavirus from the air.
Read more

Congress has severed the critical link to democratic accountability. Government keeps going in the same direction, no matter how unresponsive and ineffective.
Read more

Leicester head coach Steve Borthwick has yet to decide whether Julian Montoya, Matias Moroni and Jasper Wiese will play this month.
Read more

Britney Spears’ father to step down from conservatorship

Residents of the Miami area condo complex that collapsed Thursday have filed a class-action lawsuit – the first of possibly many that the Condo Assocation might face.
Read more

Great Britain's men score two late goals to earn a draw with the Netherlands and reach the quarter-finals of the Tokyo Olympics.
Read more

Biden blasted for ‘cheat sheet’ he used in Louisiana...

President Joe Biden traveled on Friday to Louisiana where he appeared to bring along a “cheat sheet” which featured names of photographs of local officials with certain talking points, according to a report on his visit.
Read more

Students, don’t spend more than you have to –...

UNiDAYS can save you money on over 800 top brands.
Read more

No prison time for transgender ex-neo-Nazi in threat case

SeaWorld's most famous and controversial killer whale, Tilikum, has died. The orca that killed its trainer was at was the center of the 2013 documentary "Blackfish." CBSN's Anne-Marie Green has more
Read more

Bill Gross to Get Visitor to Oceanfront Mansion: a...

Bill Gross is getting a visit to his oceanfront mansion from the judge whos been overseeing a longstanding dispute between the billionaire and...
Read more

Cigarette Makers Plunge on News That U.S. May Curb...

Shares of Marlboro producer Altria Group Inc. plunged on Monday following a report that the U.S. government is considering a rule that would lower the nicotine content of cigarettes.
Read more

A tribunal finds Paul Embery was subject to a "witch hunt" after appearing at a Leave Means Leave rally.
Read more

Facebook announced Friday that it is suspending former President Donald Trump until Jan. 7, 2023, a full two years after he was first barred from the platform.After that date, Facebook will evaluate whether the "ri...
Read more

Maxine Waters: Judge in Chauvin trial who criticized her...

Rep. Maxine Waters (D-Calif.) responded to criticism leveled against her by the judge that presided ov...
Read more

President Trump is applauding Senate Republicans for passing a $4 trillion budget blueprint, which he says is the "first step" toward tax reform. Washington Post congressional reporter Sean Sullivan weighs in on the challenges that lie ahead.
Read more

Chrissy Teigen has taken to Instagram to share a picture of a new tattoo just hours after apologizing for her cyberbullying scandal.
Read more

The United Nations chief is urging all nations to help the people of Afghanistan “in their darkest hour of need.”
Read more

This week, we go deep on the photographic and cinematic capabilities of the iPhone 13.
Read more

Rep. Val Demings is planning to challenge Florida Sen. Marco Rubio, giving Democrats a boost in a competitive 2022 race that could decide control of the Senate
Read more

The regulatory environment in China seems to be in constant tumult, but Beijing is trying to convince the world its support for private business and foreign investment remains intact.
Read more

Shooting revives criticism of Israel’s use of deadly force

Celebrity Dutch crime reporter Peter R. de Vries, known for his work in exposing the criminal underworld, is fighting for his life after being shot on an Amsterdam street, officials said on Tuesday.
Read more

Biden says Facebook ‘killing people’ when it comes to...

President Joe Biden, when asked about platforms like Facebook when it comes to COVID-19 misinformation, offered a blunt answer on Friday: "They're killing people."
Read more

Justice Stephen Breyer’s future is the biggest question as the Supreme Court winds down its term in the next week.Close observers of the court are scrutinizing any tea leaves they can find for possible clues on the 82-year-old liberal justice,...
Read more

Handclaps break out during the first song on John Smith’s new album, as if to applaud the sentiments to come
Read more

France Could Retaliate Against the U.K. Over Fishing Next...

France said it could take action against the U.K. at the end of next week if the government in London still refuses to...
Read more

The Washington Football Team appeared to be getting close to deciding on a nickname or just keeping what it has more than a year after deciding to move away from the Redskins moniker.
Read more

AMD’s DLSS rival could arrive in June – and...

Prof Van-Tam: ‘People will have to learn to manage...

Biden’s Climate Summit Shows How Far U.S. Leadership Has to...

The first day of the event produced mostly modest pledges, demonstrating how much catch-up work remains to be done.
Read more

Biden: ‘People will pay” for horseback charge on migrants...

Images of US border agents charging at migrants have sparked outrage among many US lawmakers.
Read more

Senior executives who are fully vaccinated can apply to be exempted from a 21-day hotel quarantine.
Read more

Colonial hack: How did cyber-attackers shut off pipeline?

Daniel Worrall to leave Gloucestershire after agreeing to join...

Harry and Meghan did not ask Queen to use...

It had been reported that Prince Harry had spoken to the Queen about using her nickname for his daughter.
Read more

Taiwan on Tuesday said that China had sent dozens of aircraft into the island's air defense identification zone as world leaders have ramped up warnings against Beijing over its actions across the Taiwan Strait. ...
Read more

Cheetah attacks a keeper at an Ohio zoo