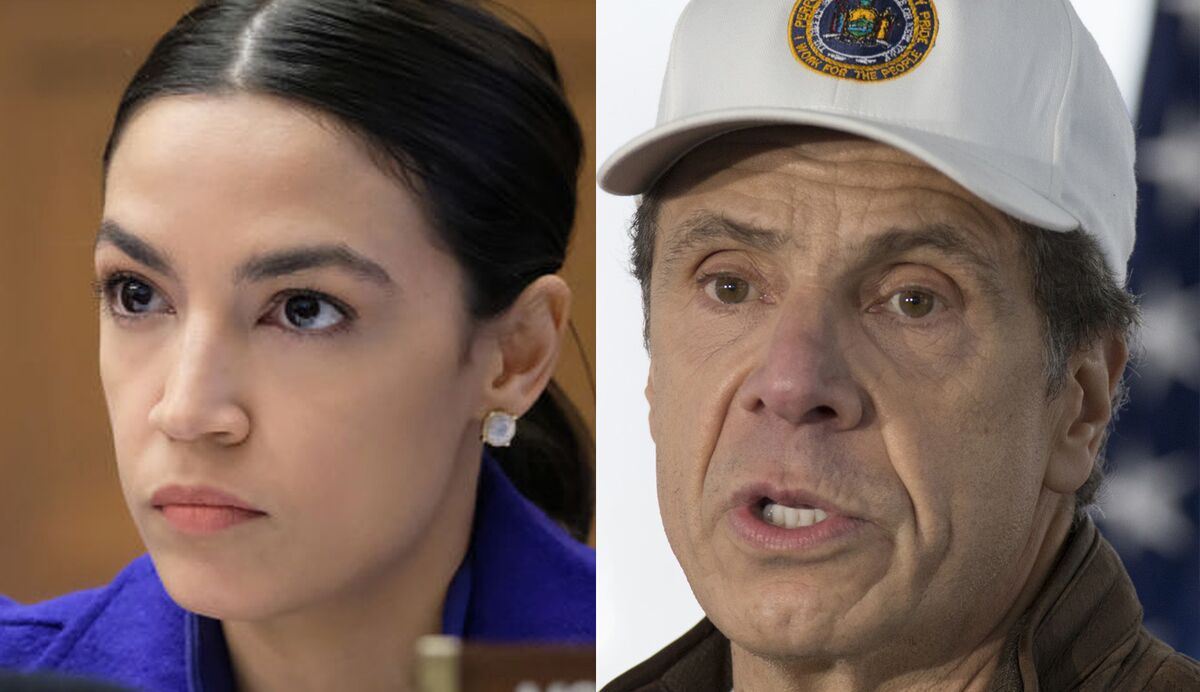 New York Representatives Alexandria Ocasio-Cortez, Jerry Nadler and other members of the states congressional delegation called on Governor Andrew Cuomo to resign, leaving him increasingly isolated as he faces allegations of sexual assault and harassment.

Ocasio-Cortez and Nadler were joined by at least nine of the Democratic House members from New York who represent both the progressive and establishment wings of the party in urging Cuomo to step down. Cuomo also is facing an impeachment inquiry by Democratic lawmakers in the state legislature.

The states two Democratic senators, Majority Leader Chuck Schumer and Kirsten Gillibrand have called for an independent investigation of the allegations against the Democratic governor. Schumer called the latest allegations — that Cuomo reached under a womans blouse and groped her in the Executive Mansion — nauseating, but neither he nor Gillibrand have gone so far as to seek his resignation.

Cuomo has refused to relinquish his seat. On Sunday he said there is no way he would resign from office as the number of Democrats in the state legislature demanding he step down was growing to 59 as of Thursday.

appointed an outside attorney to investigate the claims made against Cuomo by six women, including several former aides.

Read More: Cuomo Clings to Power as He Stares Down Impeachment Inquiry

announced it would launch an impeachment investigation into the misconduct claims that could lead to his removal.

With assistance by Billy House, and Steven T. Dennis A several-day drama brought the government to the brink of collapse.
Read more

Argentina is pivoting from one of the world’s strictest pandemic lockdowns to arguably one of its fastest reopenings.
Read more

Biden’s team tightens grip on state use of Covid...

Yamaha's Fabio Quartararo won the Doha Grand Prix after one sensational lap saw him move from third to first in Qatar.
Read more

No one wants to be told that they have cancer, but the sooner you know, the sooner you can get lifesaving treatment. The Mayo Clinic will roll out a new test that may detect more than 50 cancers by the end of the year. CBS Minnesota's Jennifer Mayerle reports.
Read more

‘Bracing for the worst’ in Florida’s COVID-19 hot zone

Hospitals are overflowing with COVID patients in northeast Florida, the hot zone in the state's latest surge
Read more

A nation exhausted by 18 months of the pandemic is trying to figure out what lies ahead.Frustratingly, there may not be a nationwide answer.The latest figures show a flattenin...
Read more

After flourishing for two decades with little regulation, China’s internet industries face a future of tighter control by the ruling Communist Party and pressure to pay for its tech ambitions, social welfare and propaganda
Read more

The chain says film fans flocked back to its cinemas at the weekend to watch films and eat popcorn.
Read more

NFL International Series 2021: All you need to know...

The NFL returns to London this month with two games on successive weekends, starting on Sunday when the Atlanta Falcons face the New York Jets.
Read more

G’day from Sydney. In this week’s dispatch, we examine the race to vaccinate against Covid-19 and the sticks and carrots wielded to coax hesitant populations.
Read more

Foundation episode 6 increases the series’ death count – and two may have particularly big impacts on its overarching storyline.
Read more

DHS warns of potential for violence surrounding the ‘Justice...

The Department of Homeland Security warned Thursday about the potential for violence from people involved in or opposed to the "Justice for J6" rally planned for Saturday, according to an unclassified intelligence briefing that was shared with state and local…
Read more

Treasury Seen Out of Cash as Late as Nov....

Senate Majority Leader Chuck Schumer plans Wednesday to seek a vote in his chamber whether to take up a measure approved by the...
Read more

Humana customers could be at risk as a database containing health insurance data from the company has been leaked online.
Read more

A California regulator proposed a statewide ban Thursday on oil and gas drilling within 3,200 feet of schools, homes, and hospitals in order to protect public health, ...
Read more

Belarusian authorities detain over 20 in new wave of...

Belarusian authorities have detained over 20 people in the latest wave of arrests, continuing their sweeping crackdown on dissent a year after a disputed presidential election
Read more

Loki episode 6 has finally landed on Disney Plus – and its spoiler-filled ending will have huge ramifications for the MCU.
Read more

Some migrant children in HHS care left in buses...

Some unaccompanied migrant children, waiting to be reunited with family in the United States, were stuck in parked buses -- at least one for more than three days -- with no access to showers or places to sleep, according to an immigrant advocate.
Read more

Biden ‘going to own’ the ‘ugly images’ resulting from...

Rep. Michael McCaul (R-Texas) on Sunday said President Biden is "going to own" the "ugly images" resulting from the withdrawal of U.S. troops from Afghanistan."When we fully withdraw, the devasta...
Read more

Opinion: The memo that saved abortion rights in America

Early this month, the Supreme Court chose to let stand Texas Senate Bill 8, a law that bans abortion after just six weeks of pregnancy and deputizes private citizens to enforce it. This new law is one of a number passed in recent years that flagrantly violate…
Read more

Couple Shun Wedding and Send Out Brilliant ‘Not Engaged’...

A couple sent out "not engaged" cards showing her posing with a bare finger, while he got down on one knee with an empty ring box.
Read more

An Israeli security guard shot and killed a knife-wielding Palestinian woman at a checkpoint in the occupied West Bank on Saturday, police said.
Read more

The FDA has told Johnson & Johnson to discard about 60 million doses of its Covid-19 vaccine that were produced at a troubled plant in Baltimore.
Read more

Letter from Africa: How Zimbabwe is still haunted by...

Long-serving ruler Robert Mugabe, who died in 2019, seems to be causing trouble from beyond the grave.
Read more

Oil giants called to testify by Dems over disinformation...

President Joe Biden has encouraged Prime Minister Benjamin Netanyahu and other top Israeli officials to wind down the Gaza offensive, according to a report Tuesday.
Read more

The impact the House’s infrastructure bill vote delay will...

By early next week, New Zealanders should know if their government’s strict new lockdown is working to stamp out its first coronavirus outbreak in six months
Read more

Leaders of the Senate Intelligence Committee and other bipartisan lawmakers on Wednesday formally introduced legislation requiring federal contractors and critical infrastructure groups to report attempted breaches in the wake of months of...
Read more

Jonas Brothers Want You To ‘Remember This’ Tokyo Olympics...

On Sunday (August 8), the 2020 Tokyo Olympics came to a close. Luckily, the Jonas Brothers couldn’t have brought a more perfect performance for the occasion with their upbeat hit single “Remember This.”
Read more

Dame Rachel de Souza wants help for children after the pandemic to be like post-war reconstruction.
Read more

For years, algorithms have driven workers to meet punishing quotas. A state bill trying to reinject humans into the workflow has cleared a big hurdle.
Read more

How Minting a Trillion-Dollar Platinum Coin Could Avoid a...

More and more politicians are waking up to the fact that in an emergency, the Treasury could mint a trillion-dollar platinum coin in order to stave off a default on U.S. government debt. A default on U.S. Treasuries would likely be catastrophic, and so this …
Read more

Virginia Democrats sue USPS for delays that threaten to...

The Virginia Democratic Party filed a lawsuit against the United States Postal Service (USPS) on Friday for allegedly failing to process and deliver election-related mail on time, contending the delays are "threaten...
Read more

Two women on an electric scooter hit a pedestrian and did not stop to provide help, officials say.
Read more

Ten people have been injured in an explosion at a Kentucky Dippin’ Dots factory Wednesday.
Read more

Jindal Steel Getting Inquiries for Billets, Blooms From China,...

Thousands of people attempting to commute to work in New York City this morning were caught off guard by a sudden deluge of rain; and, a team of U.S. Green Berets were air dropped into the mountains of northern Iraq to assess what it will take to rescue refug…
Read more

CBS News has learned about a potential terror threat. Sources say U.S. intelligence has alerted Joint Terrorism Task Forces that al Qaeda could be planning attacks in three states for Monday, the day before the election. It is believed New York, Texas and Vir…
Read more

The papers: ‘The West flees’ as ‘Taliban rule returns’

Sam Zell Buys Gold With Inflation ‘Reminiscent of the...

Billionaire investor Sam Zell is seeing inflation everywhere, and has bought gold as a hedge -- something he says he used to knock others for doing.
Read more

Who Ordered the Withdrawal From Afghanistan and When Did...

President Joe Biden is the third commander in chief to order the withdrawal of American troops from the country's longest war.
Read more

Gong Lijiao of China has won her first Olympic gold medal in the shot put with a personal best of 20.58 meters
Read more

In Part I of his interview, former Vice President Joe Biden joins "CBS This Morning" to discuss Doug Jones' victory in the Alabama Senate special election, why he wishes President Trump "would be president," his continuing friendship with former President Oba…
Read more

A House panel is scrutinizing a $700 million national security loan given to trucking company Yellow Corp. from pandemic relief funds during the Trump administration.
Read more

A union that represents emergency workers with the New York City Fire Department (FDNY) is speaking out against New York Mayor Bill de Blasio's (D) new rule that requires all city employees to either get vaccinated agains...
Read more

Watch the highlights as Tunisia's Ons Jabeur defeats Spain's Gabine Muguruza by two sets to one in the third round at Wimbledon.
Read more

Volvo-owned Polestar has reveled the look of the production Polestar 5 electric sedan set to go on sale in 2024. The model had been previewed with a prototype called the Precept.
Read more

Security forces opened fire in the Yangon area of Hlaing Tharyar as protesters used sticks and knives. The junta declared martial law in the area after Chinese businesses were attacked. Protesters believe China is giving support to the Burmese military. Also…
Read more

Kris Bowers opens up about his journey to becoming...

Blockbuster movies, hit TV shows, documentaries and even video games. Kris Bowers has composed and scored it all at just 32 years old. CBS News' Michelle Miller spoke with him about his journey scoring films and how he was influence by the Colburn School in d…
Read more

One nurse says the offer is "pitiful" and that people are leaving the profession "in droves".
Read more

California on Thursday announced it will be designating $536 million towards combatting wildfires in the state, ...
Read more

Virginia Governor Ralph Northam joined Major Garrett to talk about the future of COVID-19 regulations in the state, critical race theory as well as the investigation into New York Governor Andrew Cuomo on this week's episode of "The Takeout."
Read more

AOC, Nadler, other NY leaders call for Cuomo resignation in wake of...