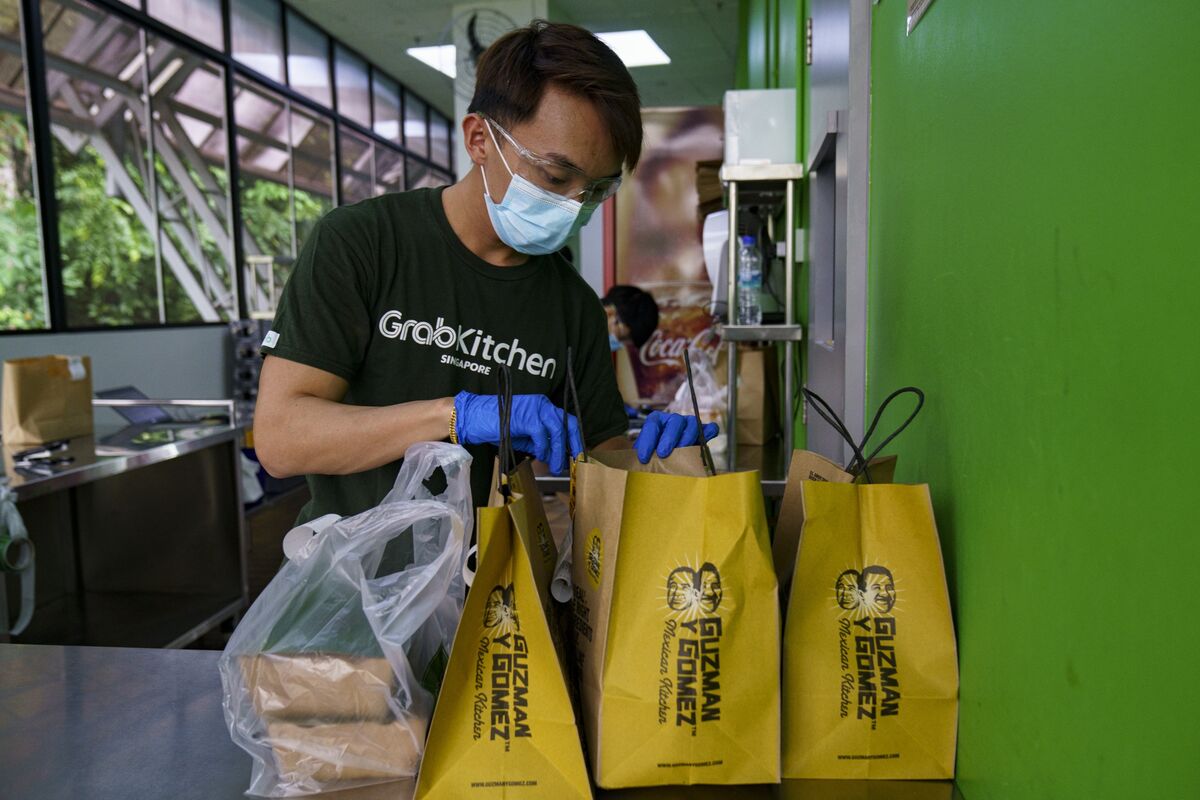 Grab Holdings Inc. is in advanced talks to go public through

Altimeter Capitals first blank-check company, in a deal that could value the Southeast Asian ride-hailing giant at about $40 billion, people familiar with the matter said.

The potential transaction with

Altimeter Growth Corp. could involve raising $2.5 billion to $3 billion through a private investment in public equity, or PIPE, according to one of the people. Formal talks with prospective PIPE investors could start as soon as next week, the people said, asking not to be identified as the discussions are confidential.

A deal announcement could come as early as April, one of the people said. Evercore Inc., JPMorgan Chase & Co. and Morgan Stanley are advising on the SPAC discussions, and more banks could be added later, according to the people.

The Wall Street Journal reported Thursday that Grab is in negotiations with one of Altimeters SPACs, without identifying the specific vehicle. Deliberations are ongoing, and details of the potential transaction could change, the people said. A representative for Grab declined to comment, while representatives for Altimeter Growth and Evercore didnt immediately comment.

Altimeter Growth Corp., sponsored by Silicon Valley investment firm Altimeter Capital, raised $500 million in an initial public offering in September. The SPAC had said in its

prospectus that it intends to acquire a business in the technology sector that will compound growth over the long-term for exponential value creation. The firms second SPAC, Altimeter Growth Corp. 2, started trading in January.

SoftBank Group Corp., grew net revenue by about 70% in 2020 after bouncing back from a Covid-19 trough. The startup, which was last valued at more than $14 billion, is now angling to delve deeper into

Merging with a SPAC, a shell company whose sponsors raise money from investors in order to buy a private company and give it a berth on a public exchange, would allow Grab to speed up its listing process. Several of the regions tech unicorns including Traveloka are considering going public through blank-check companies to ride on the red-hot sentiment.

With assistance by Yoolim Lee Joe Root is bowled for 36 by Shardul Thakur as India reduce England to 182-7, just three wickets from victory with a lead of 186 in the fourth Test at The Oval.
Read more

Poco is following the example set by other companies and has announced that keeping in mind the growing Covid numbers in India it will not hold any launches in the month of May.
Read more

Due to an eating disorder, a specific type of crisp is one of the few things Ava, four, will eat.
Read more

Dollar General Corp. discount stores in Michigan will host Covid-19 vaccine clinics to bring shots to hard-to-reach communities, according to a news release from the state health department.
Read more

Producer Jerry Bruckheimer on the magic of Hollywood’s special...

Jerry Bruckheimer is one of Hollywood's most successful and influential movie and television producers with hits such as "Beverly Hills Cop," "Top Gun," "Armageddon," and the "Pirate of the Caribbean" series. In this "CBS This Morning" extra, he talks about h…
Read more

The Freewrite Traveler Is a Distracted Writer’s Friend

This portable digital typewriter lets you scribe without being constantly pinged by the internet.
Read more

Three professors at the University of South Alabama have been placed on leave after photos surfaced of them wearing and holding racist symbols at a campus event in 2014, according to a statement from the school.
Read more

An Amazon.com Inc. employee reported receiving a “veiled threat” from a defendant accused of involvement in an international bribery scheme targeting the online retailer, according to court records.
Read more

President Biden on Wednesday will outline his accomplishments in his first 100 days in office, touting that his administration is working to restore faith in democracy amid an economic and public health crisis and in the...
Read more

Biden’s team punts on trade relief as it prepares...

Chinese officials and many American exporters are eager for Biden to roll back Trump’s tariffs. His team is using the leverage to focus on human rights, security and climate change first.
Read more

N.Ireland protocol not a territorial threat to UK, Ireland...

Post-Brexit trading arrangements for Northern Ireland are not a threat to the territorial integrity of the United Kingdom but simply a means of managing disruption from its exit from the European Union, Ireland's foreign minister said on Tuesday.
Read more

Two people have reportedly been arrested after President Macron was slapped as he toured France.
Read more

The bear was first located in Traverse City, Michigan back in April, the Michigan Department of Natural Resources said.
Read more

President Trump broke his silence Friday on Rob Porter, the staff secretary who resigned Wednesday amid reports that he had abused two former wives. CBS News’ Chip Reid is at the White House with the latest.
Read more

The fragile alliance between former President Trump and the GOP campaign organizations showed signs of fraying this week amid turf disputes over fundraising and the use of Trump’s name and image in advertising.Trump over the past week has taken...
Read more

Covid: Can the arts lead the green recovery from...

The pandemic has devastated the arts, but green shoots of recovery may be forming - in every sense.
Read more

Vietnam’s largest metropolis, Ho Chi Minh City, has began a strict lockdown in an attempt to curb its worst coronavirus outbreak, a day before U
Read more

FBI held onto REvil decryptor for weeks before sharing...

Reports suggest FBI sat on REvil’s universal decryptor for three weeks as it prepared to take action against the gang.
Read more

The West Virginia senator wants a "human" infrastructure bill separate from a "traditional" one.
Read more

Arizona Senate president Karen Fann, who was instrumental in arranging the state's so-called election "audit," announced Monday evening that she won't seek reelection and will retire from the legislature in January 2023.
Read more

The rail firm failed to engage properly with a member of the public who had to sell their home, a report says.
Read more

U.N. secretary-general Antonio Guterres is “realistic” about chances of resuming formal talks to reunify ethnically split Cyprus amid low expectations that a fresh bid to reinvigorate dormant negotiations will lead to a breakthrough
Read more

Jenner said one problem is that it's too difficult to build enough affordable housing in California.
Read more

US, Russia at odds over military activity in the...

As authorities continue to search the crime scene in San Bernardino, California, new details are emerging about Tashfeen Malik; fourteen people were killed when a pair of armed attackers stormed a holiday party inside a state office building in San Bernardino…
Read more

US exit from Afghanistan leaves progress, anxiety in its...

After nearly 20 years, the U.S. is leaving behind uncertainty in Afghanistan.
Read more

ORLANDO, Fla. – Some national Democratic donors are waiting on the sidelines in Florida, stirring concerns among Democrats in the Sunshine State who are preparing to take on Gov. Ron DeSantis (R) and Sen. Marco Rubio (R-Fla.) in next year's midterms...
Read more

"There could be worse out there. And that's what keeps me awake at night." Thousands of #Covid19-like cases raise the risk of future pandemics, according to a study by @dukenus and @EcoHealthNYC. @PeterDaszak explains how https://bloom.bg/2YZUBRD (Source: Qu…
Read more

Poco M2 Reloaded is coming to India and will...

Poco M2 is being re-launched as Poco M2 Reloaded in India on April 21 and will be available from the same day for purchase.
Read more

We talked a couple of times last week about the plucky and successful activist campaign that hedge fund Engine No. 1 LLC waged against Exxon Mobil Corp. I wrote on Thursday:
Read more

Seacor Power oil boat to be pulled from sea...

An unidentified inspector who failed to discover a crack in the Hernando de Soto Bridge linking Arkansas and Tennessee that prompted the span’s closure was fired Monday morning and may face charges, according to reports.
Read more

The U.S. saw more than 600,000 adolescents ages 12 to 15 roll up their sleeves to receive the Pfizer-BioNTech COVID-19 vaccine following the recently expanded FDA emergency use authorization.
Read more

All 16 and 17-year-olds in the UK will be offered Covid jabs within weeks, it has been announced.
Read more

The Centers for Disease Control and Prevention (CDC) updated its travel guidance for several countries as vaccinations increase in the U.S. and in some countries across the globe.The updated ...
Read more

Country star Morgan Wallen addresses his use of racial...

In an interview with the BBC, her sister questions why the killer is still at large.
Read more

Ancient Gilgamesh tablet taken from Iraq and bought by...

A rare ancient tablet bearing part of the Epic of Gilgamesh, which was sold to Hobby Lobby for display in a Bible museum under false pretenses, was returned to Iraq.
Read more

From Phoebe Bridgers To Megan Thee Stallion, Get To...

More K-12 parents support mask mandates in schools than oppose them, but support for mask mandates fails to reach a majority level, according to a ...
Read more

The cases are "not necessarily attributable" to transmission at the festival, Public Health Wales says.
Read more

eBay is the latest retailer to offer up its Black Friday deals early, but you’ll need to be a Plus member to take advantage.
Read more

Your old Samsung Galaxy phone can be an eyecare...

Samsung is bringing its Galaxy Upcycling program to India in a bid to offer affordable eye-care solution to the masses. In this, used Galaxy smartphones are being attached to handheld fundus cameras for use as an eye care device.
Read more

Pumpkin spice products are inescapable. We tested a few...

The World Health Organization (WHO) on Tuesday reported a global decline in new COVID-19 cases and deaths.It said there had been an estimated 3.3 million new infections and roughly 55,000 deaths in the past week, w...
Read more

"Pick up the phone and tell Joe Manchin, 'Hey, we should do a carveout.' I don't care whether he does it in a microphone or on the telephone — just do it," the House Majority Whip said.
Read more

Opinion | The Supreme Court Has a Branding Problem....

The SCOTUS building’s symbolic anonymity is no longer the source of strength it once was. The building needs a name.
Read more

Malmo beat HJK Helsinki to set up tie with...

Swedish league leaders Malmo will meet Rangers in the Champions League third qualifying round after coming through 4-3 on aggregate against HJK Helsinki.
Read more

Should sex offenders’ voices ever be heard?

Audio clips from child sex offenders are released by police to deter others following in their path.
Read more

Elsa became the first hurricane of the Atlantic season as it moved through the Caribbean on Friday.Elsa strengthened to a Category 1 hurricane in Barbados and will continue to move through the Ca...
Read more