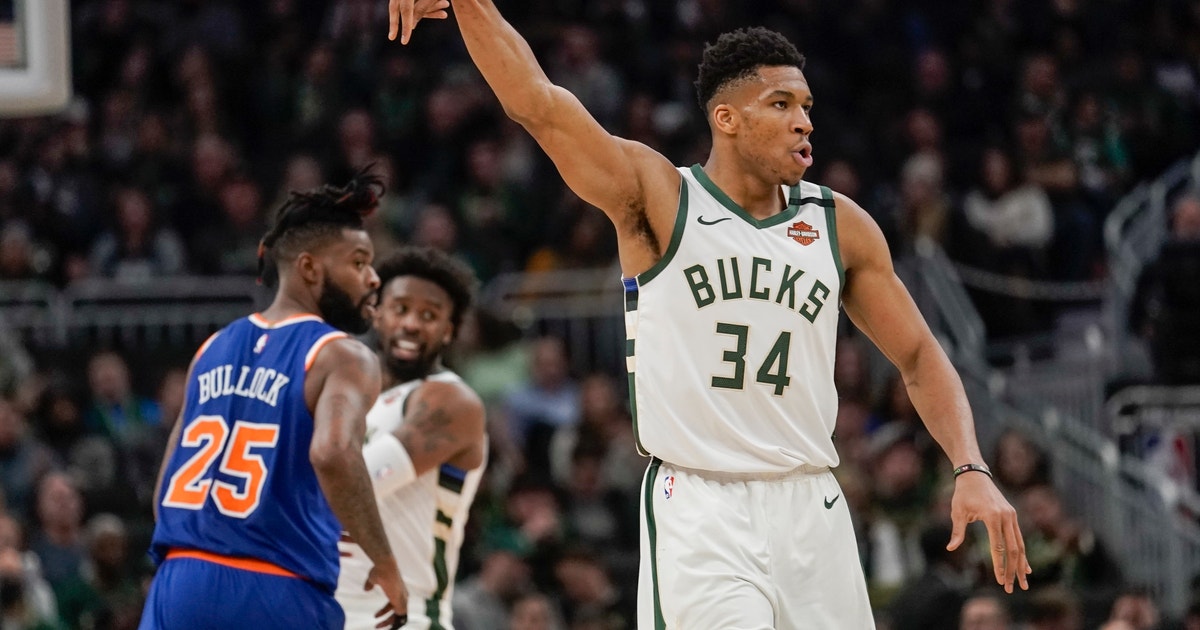 The Milwaukee Bucks start the second half of the season on Thursday night at home against the New York Knicks.

Milwaukee has won its past seven home games against the Knicks in predominately blowout fashion, outscoring New York by an average of 116.0-99.1 in those matchups.

If the Bucks want to make it eight in a row at home against the Knicks, then they might need some scoring outbursts to combat New Yorks highly ranked defense.

Milwaukee is uniquely equipped to score in bunches since it has already recorded 79 quarters in which it scored 30 or more points this season. The Bucks can really get hot and one scorching quarter could be the difference against the Knickerbockers.

One reason why Milwaukee can consistently light up the scoreboard is because it has so many capable shooters.  So far this year, the Bucks have played 24 games in which at least seven of their players have made at least one 3-pointer.

That is second in the NBA behind only the Los Angeles Clippers, who have reached that mark 25 times.

A catalyst for Milwaukees 3-point barrage has been Giannis Antetokounmpo. He has played 15 games this season where he led the Bucks in points, rebounds and assists, and has reached 20+ points, 10+ rebounds and 5+ assists in a game 19 times in 2020-21.

Antetokounmpo leads the NBA in both of those categories.

The Greek Freak and his teammate Khris Middleton have played 100 games since the start of the 2017-18 season in which they have both scored at least 20 points. The only duo with more of those games in that span is Damian Lillard and C.J. McCollum of the Portland Trail Blazers, who have done so in 104 games. ‘We shouldn’t just follow money, we should worry about...

China’s Xi protection of the Wuhan lab was potentially...

Vaccine hesitancy among nursing home staff may be contributing...

The partial closure of the world’s third-busiest container port is worsening congestion at other major Chinese ports, as ships divert away from Ningbo amid uncertainty over how long virus control measures in the city will last.
Read more

A federal judge on Tuesday issued a preliminary injunction blocking a recently passed Arkansas law that would have barred nearly all abortions in the state.U.S. District Judge Kristine Baker wrote the ban was "cate...
Read more

In defiance of a new law, Fighters for Free North Korea claims to have sent 10 balloons at the border.
Read more

Biden readies ambitious pitch to make the U.S. the...

A pledge to cut U.S. carbon pollution by roughly half of its 2005 levels would be hard to meet — but falling short would bring "consequences."
Read more

Ant Group Co. Chief Executive Officer Simon Hu resigned from the company, according to a person with knowledge of the matter, as the company overhauls its business.
Read more

The British actor and director has been accused of sexual harassment and bullying, which he denies.
Read more

Blinken says Russia must decide if it wants better...

'Ultimately it's up to Russia to decide,' he said.
Read more

Prime Day deals over $100 that are actually worth...

Some things are worth the money, including the best deals this Prime Day on items over $100.
Read more

After escaping his death during Avengers: Endgame, the trickster god now has to atone by helping Owen Wilson and the Time Variance Authority fix reality in the upcoming Disney+ series.
Read more

‘I Gave up Sex Three Years Ago’

I had partners who were complex and not ready, and I thought that love would fix everything. I also thought that sex was love and love was sex. I couldn't understand why I was having great sex but the relationship wasn't working.
Read more

The dispute over whether Roman Catholics who facilitate abortions should be permitted to receive the Blessed Sacrament appears to be coming to a head as President Joseph R. Biden Jr., a public Roman Catholic and public abettor of abortion, continues to attend…
Read more

Tiger Woods to return at the Masters

Tiger Woods, who hasn't played since Feb. 5, says he will play in the 2015 Masters. In a statement on his website Woods said, "It's obviously very important to me, and I want to be there."
Read more

Los Angeles is among a number of U.S. cities that are increasing funding for police after initially cutting budgets in the wake of the killing of George Floyd. Kenneth Mejia, a candidate for LA city controller, joins CBSN's "Red & Blue" anchor Elaine Quijano …
Read more

Lions vs South Africa live stream: how to watch...

British and Irish tourists expecting a strong response from the Springboks. Here's how to get Lions vs South Africa live stream and watch the second rugby Test online - wherever you are.
Read more

Colleges Are Urged to Require That Students Get Vaccinations

Colleges and universities should require all on-campus students to be vaccinated for the Covid-19 virus this fall, the American College Health Association said.
Read more

American Simone Biles pulls out of the vault and uneven bars gymnastics finals at the Tokyo 2020 Olympics.
Read more

Virginia is set to remove Richmond’s Lee statue on...

The Union of European Football Associations (UEFA) declined a request from Munich's mayor to allow the display of rainbow lights at their stadium, ...
Read more

The U.S. Air Force has evacuated 2,000 people in the past 24 hours from Kabul as the administration scrambles to get thousands more out of Afghanistan.
Read more

PrintNightmare can be exploited to achieve both remote code execution and local privilege escalation on Windows servers.
Read more

Travel company TUI Group (TUIGn.DE) said it would raise 1.1 billion euros ($1.27 billion) in equity to help pay down its pandemic debt, as it reported a jump in holiday bookings in late …
Read more

Oil prices edged lower on Monday as the recovery of a major U.S. pipeline network eased concerns over supply and a new wave of COVID-19 restrictions in Asia fuelled fears of lower demand.
Read more

Mike Pence and Mitch McConnell have a Donald Trump...

Speaker Nancy Pelosi's (D-Calif.) favorability rating has fallen to less than 40 percent over the last three months, according to Republican pollsters.Pelosi, who in February had a 41 percent "favorable" rating, no...
Read more

How Naomi Campbell surprised this Nigerian designer on the...

After a low-key launch Battlegrounds Mobile India now has 10 million downloads on Google Play Store and is among the 'Top Free Game' list.
Read more

Sarah Hunter returns from an injury lay-off to captain England in the Women's Six Nations, which starts against Scotland on 3 April.
Read more

Tune-In Tomorrow for a Special Disney Edition of ‘Family...

Three-year-old Harrison Louden was found dead alongside his father at their home on Friday.
Read more

Fosun Group and an arm of JD.com Inc. are among suitors considering investing in domestic operations of HNA Group Co. as the indebted Chinese conglomerate is reorganized after being placed under government control, people with knowledge of the matter said.
Read more

Up to 48 million people across Britain were eligible to vote in the bumper set of elections.
Read more

The death toll from Saturday's earthquake in Nepal has reached above 4,000, as searchers continue to look for victims and survivors in smaller towns and villages outside the capital of Kathmandu. Heavy rain is making conditions harder for survivors and rescue…
Read more

House Democrats have introduced legislation that would allow residents of federally subsidized housing to register to vote when they fill out their lease and verify their income.The bill, dubbed Our Homes Our Votes...
Read more

Your Evening Briefing: Fauci Warns of New Threat From...

These are the best series and new releases on Amazon Prime Video, Aha, Disney+ Hotstar and other OTT platforms in India.
Read more

Thousands of NY workers at risk of termination amid...

Thousands of people in New York are at risk of losing their jobs over their vaccination status. Errol Barnett has the latest on vaccine mandates in the state. Then, emergency medicine physician Dr. Owais Durrani joins Ed O'Keefe on CBSN with the latest on the…
Read more

Fox News senior meteorologist Janice Dean has turned into one of New York Gov. Andrew Cuomo's fiercest critics after both of her in-laws died of the coronavirus last spring in elderly care facilities
Read more

Predicting the output of solar panels is tricky—but getting it right could slash carbon emissions.
Read more

Canadian Prime Minister Justin Trudeau turned heads on the internet with the latest iteration of the acronym, which includes LGBT… but doesn't start with it. He spoke about "2SLGBTQQIA+ people." Commentators mocked him for "button mashing," saying, "Headbutti…
Read more

Sian Thomas's mother says her total care hours have been reduced from 39 a week to six.
Read more

Opinion | The One Place Where Republicans Think Covid...

The Memo: Will DeSantis’s star fall as Florida COVID...

President-elect Donald Trump took his "Thank You" tour to Iowa and addressed his supporters in the state for the first time since his victory on Election Day. See his full remarks here.
Read more

HAPPY THURSDAY! Welcome to Overnight Energy, your source for the day's energy and environment news. Please send tips and comments to Rachel Frazin at ...
Read more

E-scooters set for hire trial in parts of London

Scooters with a maximum speed of 12.5mph will soon be available for hire in parts of the capital.
Read more

Gap Inc (GPS.N) raised its forecast for annual sales and profit, expecting an unabated surge in demand for new apparel as more people begin to step out and socialize after a year of hunkering down at home due to the pandemic.
Read more

"I can tell you that this so-called America First Caucus is one of the nuttiest things I've ever seen," he said.
Read more

Prince Harry compares royal life to ‘being in a...

Prince Harry in a new podcast published Thursday likened his life as a member of Britain's royal family "being in a zoo," and expressed his displeasure with the public aspects of the royal family's responsibilities.
Read more

Fukushima disaster: What happened at the nuclear plant?

A tsunami struck the Japanese plant in 2011, leading to the worst nuclear disaster since Chernobyl.
Read more

Traditional exams are a ‘barrier’ for Scottish school curriculum...

A review finds a "misalignment" between the aims of the curriculum and the narrow focus on exams.
Read more

Airlines, financial institutions and other companies around the world on Thursday reported that they were experiencing technical difficulties due to a brief series of internet outages. The Associated Press reported that many of the outages were...
Read more

Montana only state to ban vaccine requirements for employees

While large companies across the U.S. have announced that COVID-19 vaccines will be required for their employees to return to work in-person, there is one state where such requirements are banned
Read more

General Motors Co (GM.N) strengthened relations with its suppliers last year despite the impact of the COVID-19 pandemic and the global semiconductor chip shortage, according to an annual North American survey released on Monday.
Read more