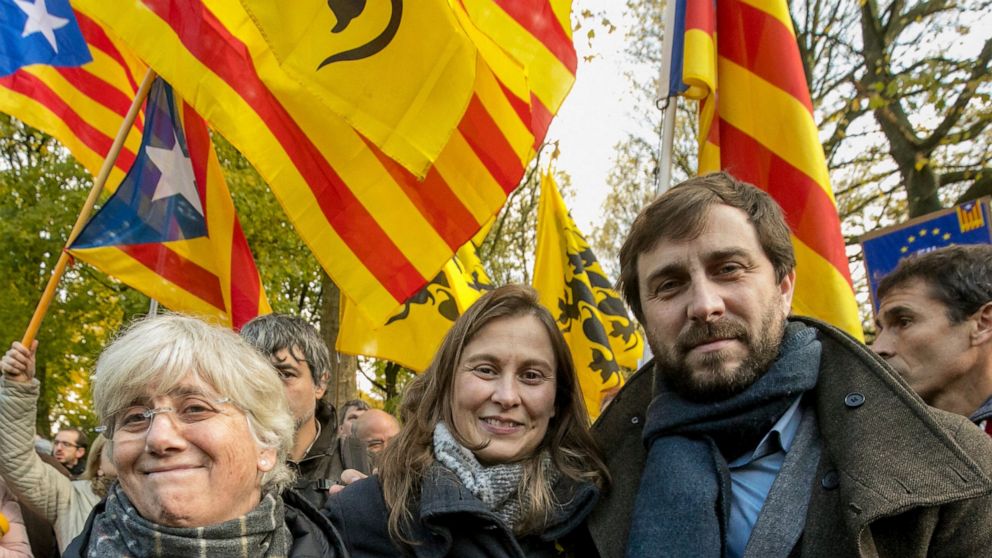 BARCELONA, Spain — Former Catalan government member Meritxell Serret handed herself into Spains Supreme Court on Thursday, three years after she fled to Belgium along with other associates who led Catalonias failed secession attempt.

A statement issued by judge Pablo Llarena said that Serret was released without bail after she turned herself into the Madrid-based court upon coming back to Spain from Brussels where she had resided since October 2017. Llarena set a hearing for Serret to be questioned on April 8.

Serret, 45, fled from Spain to Belgium in 2017 along with other members of the regional government of northeast Catalonia, including regional president Carles Puigdemont following his ineffective declaration of independence.

We thought it was the best moment to take this step and send the message that we are here, looking for political solutions to political conflicts, Serret said on exiting the court.

Serret, the former head of agriculture for Catalonia, faces charges of disobedience and misuse of public funds, although Llarena said that so far investigations haven’t linked Serret to any financial irregularities.

If convicted of disobeying explicit court injunctions to not proceed with the breakaway bid, she would face a fine and being barred from public office for up to two years.

When Puigdemont fled Spain in October 2017 he was accompanied by Serret and six other members of the Catalan regional government, which was disbanded by Spains central authorities when their independence bid collapsed. Three of them returned shortly after to Spain, where they were tried and found guilty in a 2019 trial along with other separatist leaders who had remained in the country.

Serret is the first high-profile separatist to return since then.

She said that she intended to take the seat in the Catalan regional legislature she won in an election earlier this year.

Her return to Spain comes just days after Puigdemont, along with former regional ministers Toni Comín and Clara Ponsatí, were stripped of their immunity as European lawmakers by the European Parliament, where they won seats in 2019.

Puigdemont refused to return to Spain on claims that he could not get a fair trial.

The Catalan separatists have successfully fought extradition requests by Spain. The lifting of their immunity could pave the way for Llarena to try again. Sen. Joe Manchin (D-W.Va.) warned on Tuesday that he wants both a bipartisan infrastructure bill and a separate Democratic-only bill to be fully paid for."I think everything should be paid for. We've put enough fre...
Read more

De Blasio to order all NYC workers to be...

New York City Mayor Bill de Blasio (D) is expected to announce on Monday that all city employees will be required to get vaccinated against COVID-19.City officials told ...
Read more

Mel C says Spice Girls ‘would be fools’ not...

Two years after the Spice Girls performed their sellout reunion tour, Melanie Chisholm -- better known as Mel C or 'Sporty Spice' -- has hinted that the 90s girl group will returning to the stage.
Read more

In “Unthinkable,” the new thriller by Brad Parks, house-husband Nate Lovejoy is presented with an impossible choice
Read more

Stephanie Davis, who also appeared in Hollyoaks from 2010-19, says she's "sick of being in pain".
Read more

Lincoln Financial Group, a provider of annuities and retirement products, named Ellen Cooper president and chief executive officer to succeed Dennis Glass after the 2022 annual meeting in May.
Read more

There are privacy concerns that the system will be expanded to scan phones for political speech.
Read more

Utah’s governor: ‘Politics is becoming religion in our country’

‘We’re Gonna Save the Galaxy’: Check Out the First...

Star Wars: Galactic Starcruiser is set to open in spring 2022 at Walt Disney World Resort, and today with the debut of its first commercial, we get a glimpse of what this first-of-its-kind vacation experience will be like. Check it out!
Read more

NORTH PORT, Fla. – The parents of Gabby Petito described in heartbreaking detail the moments when they heard the news that their 22-year-old daughter’s remains were believed to have been found in Wyoming after she had been missing for weeks, and say they beli…
Read more

Rate the players in the Euro 2020 Group C match between North Macedonia and Netherlands.
Read more

A research study involving 90 participants determined that MDMA, commonly known as Ecstasy or Molly, when paired with talk therapy can help those suffering from post-traumatic stress disorder (PTSD), ...
Read more

The Federal Trade Commission this week is expected to lay out its new legal strategy in an ongoing antitrust battle with Facebook that will also reveal how FTC chief Lina Khan plans to take on the market power of U....
Read more

Singapore Eases Covid Curbs in Shift to Life With...

Democratic lawmakers on Sunday offered numerous options for pathways for the potential to pass the stalled infrastructure bill and reconciliation package after failing to bring either key measures of the Biden administrat...
Read more

Acclaimed songwriter Jason Isbell on what makes a great...

Jason Isbell and The 400 Unit have just released their latest album, "The Nashville Sound," which critics are calling "one of the best of the year." Fronted by 38-year-old Isbell, this album marks a significant change in the way he's writing songs. Anthony Ma…
Read more

A crowded race to succeed Chancellor Angela Merkel after she decided not to extend her 16 years in office has left many Germans uninspired and undecided ahead of the Sept. 26 parliamentary election
Read more

What to expect in President Trump’s address to joint...

President Trump is set to lay out his domestic policy agenda in a Tuesday address to a joint session of Congress. Sabrina Siddiqui of The Guardian and Yamiche Alcindor of The New York Times joined CBSN to discuss.
Read more

Fugitive surrenders after 30 years on the run, blames...

"He slept on the beach on Saturday night and said: 'Stuff it, I'll go back to prison where there's a roof over my head,'" a source told one Australian newspaper.
Read more

The move comes after months of internal debate and external pressure.
Read more

As the rules change in England, Wales and most of Scotland, Boris Johnson urges people to remain cautious.
Read more

The assassination of Haiti’s president is the latest challenge...

Amid their country's national crisis, Haitian CNN Heroes are stepping up to keep the most vulnerable -- children and women -- safe. And they hope this moment points Haiti toward a better future.
Read more

Bob McDonnell, former governor of Virginia and a once-rising star of the Republican party, was convicted Thursday on public corruption charges. His wife was also convicted. The couple was under investigation for dealings with a medical supplement company. Chi…
Read more

The bestselling mystery writer and the former Democratic presidential candidate forged a friendship having experienced loss – and working together on the conspiracy novel "State of Terror" was a form of therapy for both.
Read more

Six cyclists and the suspect are critically injured after the incident at a charity bike ride.
Read more

John Woods on the Markets (Radio)

The sprawling airbase has been the centre of operations against the Taliban and al-Qaeda for almost 20 years.
Read more

Chevrolet Camaro tipped to be reincarnated as fully electric...

General Motors could be cooking up a replacement, but it won't look like the Camaro we've seen over half a century.
Read more

Turkey back on F1 calendar as it replaces cancelled...

The Turkish Grand Prix is reinstated on the Formula 1 calendar this year for the second time.
Read more

Suspected Drunken Driver was Engaged in sex act Before...

A San Jose man on an alcohol and cocaine bender, and engaging in a sex act in his truck, backed into a bar and grill in San Jose, Calif., killing a mother and injuring two other males.
Read more

White House looks to raise taxes on wealthy and...

The White House is looking to fulfill one of President Joe Biden's campaign promises by raising taxes for the wealthy and on corporations, White House press secretary Jen Psaki affirmed on Monday.
Read more

Liverpool's attacking midfielder Harry Wilson leaves the club's training camp in Austria to complete a move to Fulham in a deal worth about £12m.
Read more

Why Bob Saget Has Been Blocking Twitter Users for...

Ida’s path of destruction: New Orleans may be without...

At least one death reported from one of the strongest storms to ever hit the U.S. mainland.
Read more

Detroit Lions coach Dan Campbell appeared to be frustrated with another loss Sunday at the hands of the Cincinnati Bengals and posed a challenge to his quarterback who has been at the helm of all six.
Read more

Victoria station: One dead and two injured in bus...

Two buses were involved in a crash during rush hour outside Victoria train station in London.
Read more

China Has No Post-Vaccine Plan

A-Rod’s MLB career possibly over after last game as...

The career of one of baseball's brightest and most controversial stars remains up in the air. Alex Rodriguez played his final game as a New York Friday night at Yankee Stadium, but there are still questions about whether his playing days are done. Damon Amend…
Read more

President Biden said Saturday that "initial thinking" is that the Russian government is not behind a ransomware attack targeting a tool provided by Miami-based IT software management company Ka...
Read more

And Sen. Rob Portman says IRS enforcement is out of the bipartisan infrastructure proposal.
Read more

Costco said it will limit purchases of toilet paper, cleaning supplies and bottled water amid shortages of container ships, factory workers and truck drivers, as well as a rise in demand because of the Delta variant.
Read more

Welcome to Thursday's Overnight Health Care. Clubbing for a cause? Scientists in Paris are lookin...
Read more

East Timor has recorded its first case of community transmission of the highly contagious Delta variant of the coronavirus, raising concerns by its health ministry about a possible spike.
Read more

A group of Michigan poll challengers filed the lawsuit after receiving cease and desist letters, insisting they were "damaged by Dominion's Lawfare campaign."
Read more

Some California hospitals are running out of ICU beds as the delta variant continues to spur COVID-19 cases in the state, ...
Read more

On The Money: Five takeaways on a surprisingly poor...

Happy Friday and welcome back to On The Money, where we're thinking a lot about the lost ...
Read more

New leaks have come up with the purported specs of the upcoming RedmiBook laptop in India. And if we go by the leaked specs the new laptop would be named RedmiBook 15.
Read more

Scientists are racing to come up with technologies that can solve the world's clean water shortage.
Read more

A Valve developer has clarified that the company's Steam Deck is targeting 30fps as a minimum, as well as revealing manual FPS limiting options to improve battery life and performance.
Read more

The 90-year-old billionaire investor has pledged to give away all of his Berkshire Hathaway shares.
Read more