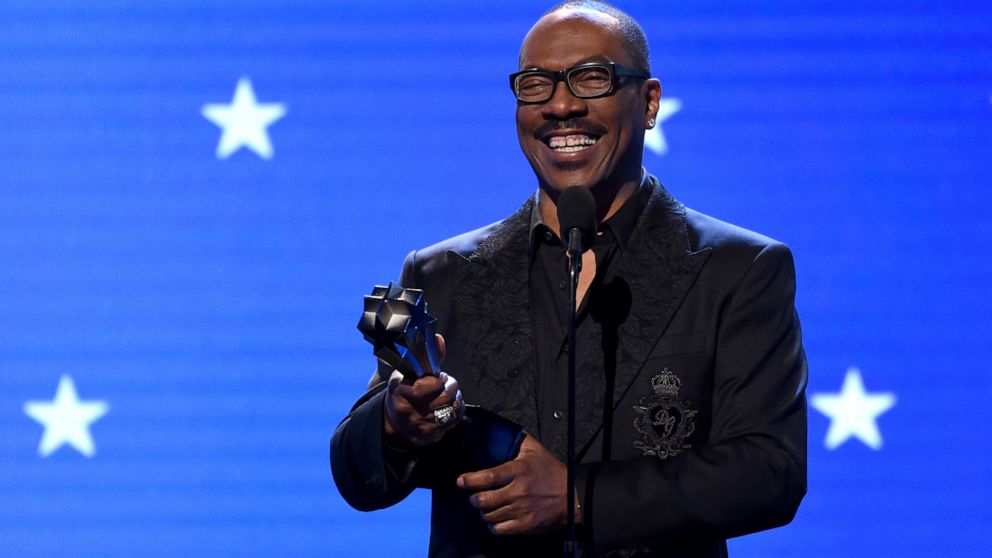 LOS ANGELES — Eddie Murphy will be inducted into the NAACP Image Awards Hall of Fame this month.

The NAACP announced Thursday that Murphy will be inducted during the March 27 ceremony, which will air on CBS. The actor-comedian will be presented the award by his longtime friend and Coming 2 America co-star Arsenio Hall.

The hall of fame induction is bestowed on an individual who is viewed as a pioneer in their respective field and whose influence shaped the profession for generations to come.

Previous inductees include Oprah Winfrey, Stevie Wonder, Spike Lee, Ray Charles and Sidney Poitier. The most recent honorees to be inducted were Cheryl Boone Isaacs and Paris Barclay in 2014.

To this day, Eddie Murphys work continues to bring joy and laughter to individuals around the world, and he is an amazing example of Black excellence, creativity, and artistry, said Derrick Johnson, the president and CEO of the NAACP.

Murphy began his career as a stand-up comic while a teenager and eventually joined the cast of Saturday Night Live. He starred in the box office hit 48 Hours and made his mark in a slew of films such as Beverly Hills Cop, Coming to America, The Nutty Professor, Dr. Dolittle” and Dolemite Is My Name. His latest film Coming 2 America” released on Amazon last week.

The organization announced that singers Maxwell and Jazmine Sullivan are set to perform during the live telecast. The NAACP Image Awards honoring entertainers and writers of color will also simulcast on BET, MTV, VH1, MTV2, BET HER and LOGO. After the 2020 show did not feature any in-person performances, the red carpet returned.
Read more

Retrospec’s Folding Ebike Is Attractive, but Far From Perfect

The Jax Rev electric bike does the job, but a few issues have us worried about reliability.
Read more

Rescue crews continue to search for dozens missing in...

Overnight, crews continued to search through the rubble in hopes of finding survivors after the Champlain Tower South condominium came crashing down. At least four people are confirmed dead and more than 150 are unaccounted for. Mark Strassmann is in Surfside…
Read more

Social Finance Inc. is edging deeper into cryptocurrencies, allowing its customers to redeem rewards earned through the company’s app for Bitcoin or Ethereum.
Read more

Two British nationals and the child of another were among those killed, the foreign secretary says.
Read more

Should Hearts fans be worried about the future after...

Hearts are comfortably heading for promotion but after a Scottish Cup exit to Brora Rangers, should fans be worried about the future?
Read more

A gunman has opened fire in a university in the Russian city of Perm, leaving at least four people wounded, the university’s spokespeople says
Read more

Three German parties agreed a roadmap to form a new German government on Friday that included no tax increases, the minimum wage, and commitments on infrastructure spending. Following are some economists' assessments of the outline. Read more

On Fox Across America with Jimmy Failla, Rep. Kat Cammack (R-FL) explained why she so “fired up” about the way Vice President Harris portrayed rural voters in America when it comes to voting rights in America. “I just don’t know how to even respond to the asi…
Read more

Ralph Puckett, a retired Army colonel, will receive the Medal of Honor for his service during the Korean War.
Read more

Adnoc and Fertiglobe to sell blue ammonia to Japan’s...

The Abu Dhabi National Oil Co (ADNOC) said on Tuesday it has, in partnership with Fertiglobe, agreed to sell blue ammonia to Idemitsu in Japan for use in its refining and petrochemicals operations.
Read more

Business activity aids Vodafone, which says operating and retail environment has not returned to normal just yet.
Read more

This Plastic Phone Case Could Biodegrade Within 2 Years

Most plastics take hundreds of years to decompose. This one, from case maker Pivet, harnesses the power of hungry microbes.
Read more

Israel announced on Sunday it struck a Hamas military compound and tunnel entrance in the Gaza Strip in response to clashes along the border between Palestinian protesters and troops.The Associat...
Read more

Rick Perry: The country that will hold the European...

The Gen Z TikTok accounts capturing the beauty of...

As interest in coronavirus vaccinations dwindles nationwide, providers are ramping up efforts to find and reach millions of people in the U.S. who cannot leave their homes or who need help with transportation.
Read more

Both said that they are following the data.
Read more

The Church says the bill would stifle Catholic freedoms, but advocates say safeguards are in place.
Read more

Cotton heads to Iowa to launch ‘Veterans to Victory’...

Sen. Tom Cotton (R-Ark.) is traveling to Iowa on Tuesday to roll out a new program to help elect Republican military veterans to Congress.Cotton will formally announce the program during a previously scheduled trip...
Read more

A screenless fitness tracker, the Whoop Strap 3.0 is designed to help you perform at your best and prioritize rest.
Read more

Chipmaker Intel Corp's (INTC.O) shareholders did not approve an executive compensation plan of its listed officers, according to a regulatory filing on Wednesday.
Read more

A tornado touched down in the Chicago suburbs of Naperville and Woodridge in the overnight hours causing severe damage to some of the homes in the area.
Read more

Thousands of people attended a memorial service at UC Santa Barbara to honor and remember the victims of the mass killing that left six UCSB students dead and 13 other people injured.
Read more

The US socialite who gave it all up to...

Sister Mary Joseph gave the end of her life to God but her first 60 years were far from traditional.
Read more

Greene tries to confront AOC, asks why she supports...

Rules requiring all lawmakers and staff on the House floor to wear masks will remain in place until they are all fully vaccinated against COVID-19, the Capitol physician said in a memo following new guidance Thursday from...
Read more

Your Evening Briefing: Biden’s Big Vision for America Could...

Federal judges call for more security amid spike in...

Federal judges are warning of a growing trend of threats against those who serve on the bench, with some advocating for legislation that would scrub their personal information from the internet."We need to understa...
Read more

Two of the most coveted items in stamp-collecting and one of the world's rarest coins could break auction records within minutes of one another.
Read more

Mitt Romney Doubles Down on Diplomatic Boycott of 2022...

Romney was president of the 2002 Salt Lake City Winter Olympics, and now he's calling for a diplomatic boycott of the Winter Games 20 years later.
Read more

Adam Schiff calls for investigation after report of his...

The New York Times reported that the department hunted for leakers behind the distribution of classified information early in the Trump administration.
Read more

Some Google Assistant commands might soon work without “hey...

Google is tweaking the way that it handles Assistant requests, though it looks as though the feature will be very much opt in.
Read more

Connor McMath sentenced to a minimum of 15 years for fatally stabbing Sean Ford in the neck in Wishaw.
Read more

The decision by Portland police to use a hands-off strategy to opposing rallies drew criticism this week as violence between the two political groups ended with gunfire Sunday, according to a report.
Read more

The image of Chloe Clem could fetch her tens of thousands of dollars at auction.
Read more

Israel and the United Arab Emirates, which have the world’s fastest inoculation programs, have started talks to establish a quarantine-free travel corridor for people who have been fully vaccinated against the coronavirus.
Read more

Fingerprint from 5,000 years ago found in Orkney

The print was discovered on the fragment of a clay vessel a made by a Neolithic potter.
Read more

A 67-year-old Lyft driver was allegedly attacked and robbed at gunpoint while refueling at a Los Angeles gas station on Monday, according to a report.
Read more

Microsoft’s repository of its Linux packages was down for over 18 hours.
Read more

Many companies are transforming their brands to show support for the LGBTQ+ community. But their political contributions appear to tell a different story. Sheila Krumholz, an administrator for OpenSecrets, joins CBSN's Lana Zak with more.
Read more

Elon Musk Working With Dogecoin Developers On Efficiency After...

Tesla CEO Elon Musk said Thursday that he was working with Dogecoin developers "to improve system transaction efficiency," prompting the price of the cryptocurrency to quickly spike.
Read more

‘I’m living my childhood dream as a theme park...

Huawei is giving both its new and existing customers extra time on their warranties and several perks.
Read more

A bipartisan group of senators reintroduced a bill Thursday aimed at blocking any U.S. president from leaving NATO."NATO has been a critical alliance for nearly 75 years," Sen. Tim Kaine (D-Va.), a member of the Se...
Read more

The report, which has not been released to the public, came just ahead of outgoing Executive Director Mike Brune’s Aug. 13 resignation from the Sierra Club.
Read more

Manchester City: Pep Guardiola will not apologise for asking...

Pep Guardiola has said he will not apologise for calling on more Manchester City fans to attend their Premier League game with Southampton.
Read more

Supermarket groups Carrefour and Tesco will not extend purchasing...

French supermarket group Carrefour (CARR.PA) and its British peer Tesco (TSCO.L) said on Monday they would not extend a purchasing alliance between the two companies.
Read more

Roshun Patel on What Really Happened During the Crypto...

Organisers say it will have to comply with Covid rules after two years of online festivals.
Read more

‘It Was Empowering’: Teen Mom OG‘s Catelynn And Tyler...

Catelynn and Tyler cast their ballots for the Presidential election on 'Teen Mom OG.'
Read more

The Supreme Court has declined to block a deeply divisive Texas law that bans abortions after about six weeks of pregnancy - and effectively outlaws the procedure in most cases.Just after midnight on Thursday, the...
Read more

TCS is SonyLiv’s tech partner – Can it help...

After the Nasdaq whale and GameStop, the implosion at Archegos suggests the balance between freedom and regulation needs further refinement.
Read more

The 2021 BAFTA nominations are in, and this year's list is as diverse as it gets.
Read more

Head of Xbox Phil Spencer has assured Fable fans that Playground Games is the right developer for the long-awaited reboot.
Read more

The Food and Drug Administration (FDA) rescinded its emergency use authorization for the monoclonal antibody bamlanivimab to be used on its own as treatment against COVID-19 due to variants' resistance to the therap...
Read more

Sneak peek: Death of an Olympian

The torso in the Thames: A 20-year mystery

Twenty years ago, a young African boy was murdered and his torso was dumped in the Thames. It's the longest unsolved child murder case in the recent history of the Metropolitan Police.
Read more

New hosts for ‘The Bachelorette’ after racial controversy

ABC Entertainment and Warner Horizon say Chris Harrison will not be hosting the upcoming season of “The Bachelorette.”
Read more

Businesses are losing out due to poor password experiences

U.S. stock index futures rose on Friday as focus turned to a closely watched inflation report after recent worries about a spike in prices put the S&P 500 on course for its smallest monthly gain since February.
Read more

From job cuts to online commerce, virus reshaped US economy