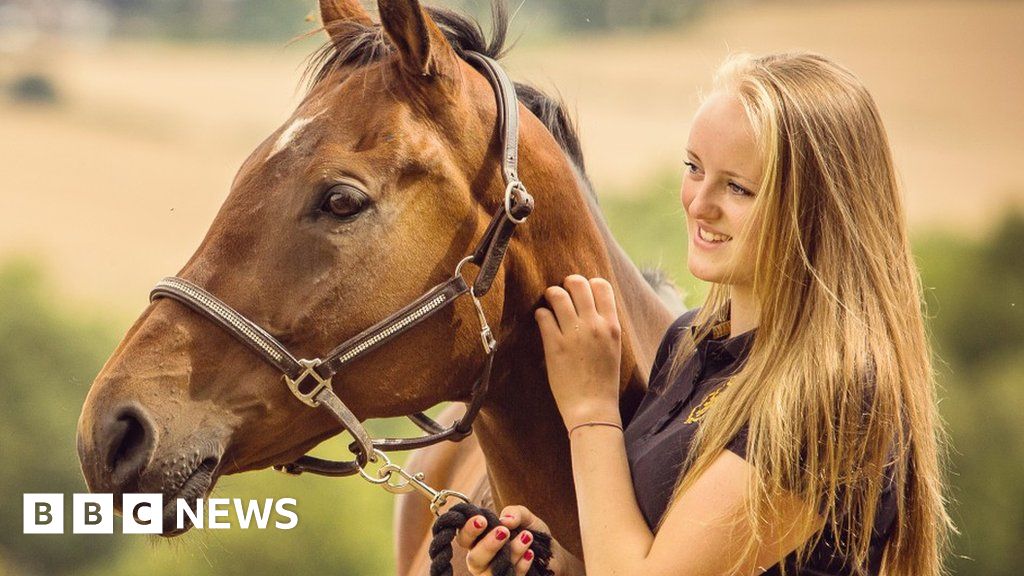 Image caption, Gracie Spinks, 23, was murdered by a former colleague who was “infatuated” with her

The parents of a young woman who was killed by her stalker believe she would still be alive if police had “done their job properly”.

Six weeks before Gracie Spinks was stabbed to death in June 2021, two walkers found a bag of weapons near the scene and gave it to police.

Her parents have now been told the bag contained a shop receipt that linked back to killer Michael Sellers.

Derbyshire Police told the BBC they could not comment on this.

This is due to an ongoing investigation by the Independent Office for Police Conduct (IOPC), which has served a gross misconduct notice on a police sergeant and misconduct notices on two constables in relation to what police did with the bag.

“It was a very, very sinister bag of weapons, including Rambo-style knives, axe, blades, Viagra, a note, and they just logged it as lost property,” said Gracie’s mother Alison Heaton.

“We now know that bag directly led straight back to Michael Sellers. There was a receipt in there that led back to his household.”

Mrs Heaton said they had been told about the receipt – which had card payment details printed on it – by police.

By that point Gracie had already complained to police about Sellers stalking her, after she saw him waiting at the stables in Duckmanton where she kept her horse.

This was the same area where the bag of weapons was found, and where she was killed.

“Surely basic policing and training would show you that is a bag of weapons [belonging to someone] about to commit a murder?” said Gracie’s father, Richard Spinks.

“If they had done their job properly, Gracie would still be alive today.”

Misconduct notices have also been served on a separate police sergeant and constable concerning how the investigation into Gracie’s stalking complaint was handled.

Image caption, Gracie was murdered after going to look after her horse Paddy at stables in Duckmanton

An inquest which opened into Gracie’s death heard she died from a stab wound to the neck on 18 June 2021, after going to look after her horse Paddy in Duckmanton.

Sellers, who was 35, is thought to have killed Gracie before running away and killing himself in another field.

Gracie met Sellers when she started working at Xbite, an e-commerce company in Chesterfield, in April 2020.

She had been working as a lifeguard but was furloughed because of the pandemic.

Sellers was Gracie’s supervisor and became “infatuated” with her, her mother said.

Gracie agreed to go for a meal with Sellers but her mother said she was not interested in a relationship.

“Because he was her supervisor she was a bit anxious and nervous about how to tell him to go away,” said her father.

“He pestered her with messages and phone calls; obviously she blocked him in the end.

“He was constantly asking [work colleagues] ‘what’s Gracie doing, where is she?'”

Image caption, Michael Sellers is thought to have killed Gracie before running away and killing himself

In early 2021 Gracie saw Sellers waiting for her near the Duckmanton stables.

He was waiting in a white VW Scirocco car, which he bought after Gracie told him she liked her brother’s Scirocco.

Gracie’s father said this “spooked her even more”.

“The fact he had bought it and the fact he was there that morning waiting for her,” he said.

“He knew all her movements you see, it was definitely stalking.”

Gracie then reported Sellers to Xbite, who suspended him and advised Gracie to report him to police.

“They left that evening saying they were going to go to his home address and tell him to leave her alone,” she said.

“The police have since told us that they did go to his address and he said he was in a relationship with Gracie, which to us flags alarm bells even more.

“If that’s what he’s telling the police and Gracie’s saying something completely different, there’s clearly a problem.”

Image caption, Richard Spinks believed his daughter would still be alive if she had been warned about the bag of weapons

Gracie’s parents said, following the sighting of Sellers, they did not let her go back to the stables on her own for weeks.

If they had known about the bag of weapons, they said they would not have let her go there on her own again.

The bag was found by Anna White and her partner Wayne Kipling.

“When we took everything out the bag and saw the note that said ‘don’t lie’, it was obvious that it was going to be used to kill someone.

“That’s what I thought, so that’s why I rang the police,” said Ms White.

“I asked what was going to be done with it and they said it would probably just go to lost property. I was just gobsmacked.”

By coincidence, her daughter also works at Xbite.

She said Sellers was known as “creepy Mike”.

“He must have been a certain way with the girls, I think, and that’s what they called him,” she said.

Image caption, Wayne Kipling and Anna White found the bag of weapons near the scene where Gracie was later murdered

Gracie’s parents believe police should have spoken to staff at Xbite, where other women had reportedly made complaints about Sellers.

They are now supporting a campaign for Gracie’s Law, which asks the government to fund stalking advocates for police forces.

“I don’t think they [police] get enough training in stalking or understand it fully, and that’s what needs to be addressed as well,” said Mr Spinks.

“We don’t want this to happen to anybody else.”

Derbyshire Police has announced it is to appoint a stalking coordinator.

In a statement, the force said: “We continue to support and fully cooperate with the IOPC investigation into the circumstances leading up to the tragic death of Gracie.

“We are keeping the IOPC up to date with a number of improvements we have implemented in recent months and we would encourage all victims of stalking and harassment to report incidents to us for investigation.

“We’re unable to comment further at this time due to the ongoing IOPC investigation.”

An IOPC spokesperson said: “We have completed our investigative steps into the actions of Derbyshire Constabulary in the months leading up to the death of Gracie Spinks in Duckmanton in June last year and are now compiling our final investigation report.

“We have kept Gracie’s family, the coroner, and Derbyshire Constabulary updated during the course of our investigation.

“At its conclusion we will decide whether any of the five officers we have served notices on may have a disciplinary case to answer.

“We are also considering whether any learning has arisen for Derbyshire Constabulary from their contact with Gracie prior to her tragic death.” Larry Ellison Bought an Island. Lifelong Locals Are Being...

How destructive AR-15 style rifles can be

Apps that can help families save money amid rising...

5 Ways the Return of Disney’s H2O Glow After...

The mystery of Anthrax Island and the seeds of...

10 dead in mass shooting at supermarket in Buffalo,...

Biden tells Ukraine that U.S. will act “decisively” if...

Beyoncé’s New Single ‘Break My Soul’ Will Soundtrack Your...

How Mike Pence ‘Absurdity’ Made Him Donald Trump’s VP:...

Police respond to call of shots fired at Love...

Woman Backed for Her Bad Review of Tiny Anime...

Ferrari to make 80% hybrid and full-electric range by...

Arizona wildfire triples in size as thousands flee their...

House approves ban on Russian oil to US, bolstering...

Russian mercenaries bombard Bakhmut as Moscow searches for a...