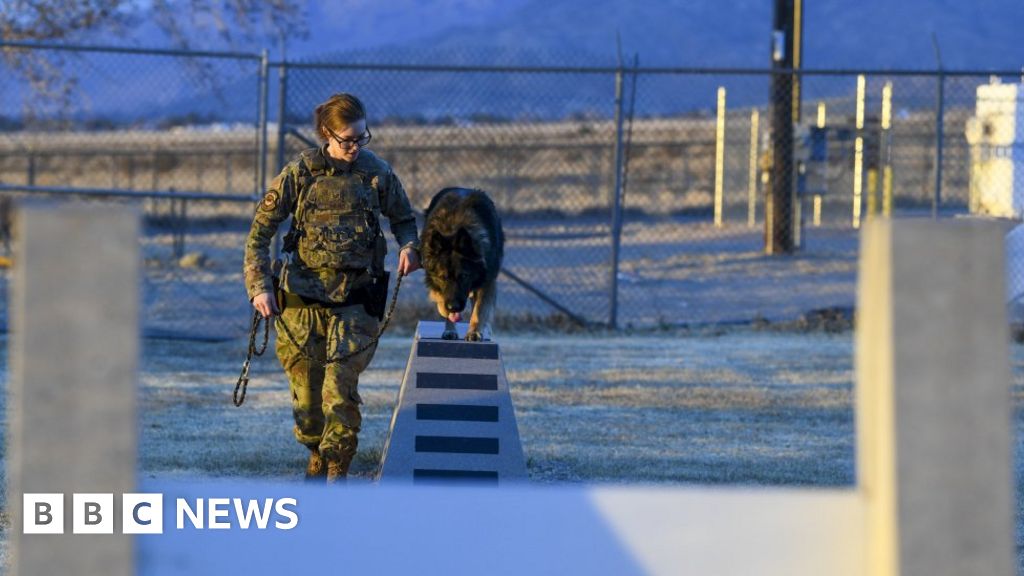 The Pentagon has condemned a Fox News host who called female troops “a mockery of the US military”.

Tucker Carlson, one of the most popular hosts on the network, made the remark on his Tuesday programme.

Other top brass, as well as veterans groups, have also rebuked Mr Carlson.

“Pregnant women are going to fight our wars,” he said. “It’s a mockery of the US military.”

Senior members of the military who use to Twitter as a means to speak directly to their troops, used their accounts to denounce Carlson’s comments.

General Paul Funk, who leads the Army Training and Doctrine Command tweeted that “thousands of women serve honourably every day around the globe”.

“They are beacons of freedom and they prove Carlson wrong through determination and dedication,” he wrote. “We are fortunate they serve with us.”

Major General Patrick Donahoe posted a video of him “conducting a re-enlistment for one of the tens of thousands of women who serve in our Army.”

“Just a reminder that @TuckerCarlson couldn’t be more wrong,” he said.

Mr Kirby said he hoped the commentator would “realise the mistake he made and express some regret about the manner in which he essentially demeaned the entire U.S. military and how we defend and how we serve this country.”

The Pentagon would not be take military advice from Mr Carlson in any case, he said. The leader of Myanmar’s military junta has attended an international conference in Moscow, an appearance that reflects Russia’s eagerness to develop ties with it despite international opprobrium
Read more

Glenn Close on 8 Oscar nods with no wins:...

Though Glenn Close has been nominated for eight Oscars without any wins, the distinguished actor wants to make one thing clear: she is "not a loser.”
Read more

An overwhelming mudslide that took down dozens of houses and buildings in a town southwest of Tokyo on Saturday has left an estimated 19 people missing, with the possibility of dozens of others unaccounted for as of...
Read more

Boulders blocked ambulance from reaching boy who had stroke

Cain, 13, was playing with friends at a reservoir when he collapsed.
Read more

Amanda Gorman became the youngest inaugural poet when she recited The Hill We Climb.
Read more

Former Secretary of State Condoleezza Rice said President Trump was successful as a politician in part because of his ability to conne...
Read more

The U.S. Supreme Court cleared the way for greater compensation for student-athletes in a ruling that may loosen the National Collegiate Athletic Association’s grip over college sports.
Read more

The world’s ‘coolest’ street revealed by Time Out

A tree-lined walkway in Barcelona and a bustling riverside thoroughfare in London all make media company Time Out's hot list, but which street is named the coolest?
Read more

Ireland's Six Nations game against France on Saturday could be in doubt because of new quarantine rules introduced by the Irish government.
Read more

The nation is racing to vaccinate Americans and avoid another variant-fueled surge. But as Omar Villafranca reports, daily shots are still lagging. Dr. Ebony Jade Hilton, the co-founder and medical director of Goodstock Consulting and an associate professor o…
Read more

Time for NEWSOM to call in the BIG GUNS?...

THE BUZZ SHOULD NEWSOM CALL IN THE BIG GUNS?With the Sept. 14 recall election approaching and ballots already in the mail, some Democrats...
Read more

Pats Releasing Gilmore After Failing to Agree on Contract

Michael Gove on vaccine passports at events with big...

People should be “confident” those attending large-scale events are “less likely to be carriers of the virus”, the Cabinet Office Minister says.
Read more

Wild shut out by Avalanche, 6-0

The new drug, Wegovy, has been approved for people who are either obese or overweight and have at least one weight-related medical problem. Dr. Jon LaPook has the details.
Read more

A first-time activist investor with a tiny stake in Exxon Mobil Corp. scored a historic win in its proxy fight with the oil giant, signaling the growing importance of climate change to investors.
Read more

Contrary to Microsoft’s suggestion, CISA advises all Cosmos DB users to err on the side of caution and rotate their keys.
Read more

Some companies have already extended their return policy to accommodate for the early holiday shopping.
Read more

Here’s how one college system kept Covid-19 cases down...

In September, cases in the heavily vaccinated state of Maine, began to rise. State hospitals and ICU units began to fill. More ventilators were needed than ever. And yet, throughout the University of Maine campus cases remained extremely low and seemingly avo…
Read more

This week on "Face the Nation," warning signs about new coronavirus cases, extreme weather affecting tens of millions and a threat to Russia following the latest cyberattack.
Read more

Alex Davies, 26, from Swansea, is alleged to have stayed in National Action despite it being banned.
Read more

Right-wing website Infowars host Owen Shroyer is under police custody, facing misdemeanor charges for his role in the Jan. 6 attack at the Capitol,...
Read more

Next Africa: Tanzania’s New Leader Breaks With the Past

Covid in Scotland: Sturgeon to confirm delay to lockdown...

The first minister is expected to confirm a move to level zero in Scotland will be pushed back until mid-July.
Read more

US politician Nancy Pelosi was among those hearing about how TV show storylines can tackle hate.
Read more

House members plan to introduce two bipartisan bills on Friday that address the origins of the pandemic and China’s culpability.
Read more

As the pandemic in the US slows, the fight...

Dr. Michael Saag normally cares for Covid-19 patients, but early in the pandemic, he became a patient. Now, he has joined the ranks with lingering symptoms from a condition doctors are still trying to understand.
Read more

Leeds United midfielder Kalvin Phillips says life has been "crazy" since his breakout performances with England at Euro 2020, and his niece and nephew now think he's a "superstar".
Read more

A series of major cyber-attacks in recent weeks has underscored the brazenness of the attackers and the challenges of tackling the problem of ransomware, just as the Biden administration announced plans to take on the issue.
Read more

A judge on Tuesday approved the extradition of disgraced Hollywood producer Harvey Weinstein to California for pending sexual assault charges in the state, The Associated Press reports.
Read more

France's decisive, second round of voting in regional elections is being scrutinized as a litmus test of whether the anti-immigration far right is gaining acceptability before the French presidential election next year
Read more

These are the unbelievable Australian PC Awards prize packs...

New book offers window into the Trump presidency from...

In the days before Rep. Adam Schiff became then-President Donald Trump's chief congressional nemesis, Trump praised the man who would go on to epitomize his toxic relationship with Democrats on Capitol Hill.
Read more

Some people who took tests in Berkshire earlier this month may have wrongly been given the all-clear.
Read more

Old problems emerge ahead of the start of 2020 World Cup qualifiers, but will there be any surprises in Steve Clarke's Scotland squad?
Read more

Georgia, Cincinnati and Oklahoma had good wins while Iowa had a bad loss, shaking up the top 5 this week.
Read more

Giancarlo Stanton led off the 11th inning with an RBI single Friday night and the New York Yankees came back to edge the Baltimore Orioles 4-3.
Read more

Microsoft should be bold with Windows 11 and overhaul...

With the new Microsoft Office and Windows 11 in testing, it's time for Ribbon to see a reboot.
Read more

Britain and Singapore will on Monday start negotiations on a new digital trade agreement that could remove barriers, part of London's push to become what it calls a "global tech powerhouse" post-Brexit.
Read more

Tensions continue to rise in Ukraine

These true wireless earbuds are even cheaper than an...

JLab has announced an even cheaper follow-up to their GO Air wireless earbuds.
Read more

Getting the facts right on Operation Warp Speed

The actual history of OWS diverges dramatically from that anticipated by its skeptics.
Read more

Just weeks ago, Dylan Harrison's father tried to persuade him to leave law enforcement to be an electrician. Instead, Harrison redoubled his commitment to policing.
Read more

Pandemic impact ‘yet to be felt’ on high streets

An average of 48 outlets per day closed last year, but there may be worse to come.
Read more

Why is Friday the 13th unlucky? The cultural origins...

When it comes to bad luck, there are few superstitions as pervasive in Western culture as that of Friday the 13th. Here's why.
Read more

A routine check found the drugs with a street value of £140,000 at the ferry port in Cairnryan.
Read more

George Zimmerman lost a defamation lawsuit Monday he filed against NBC in which he claimed the network edited 911 tapes to make him sound racist. Erik Sandoval from Orlando affiliate WKMG reports.
Read more

Pandemic or no pandemic, the world will never stand still
Read more

Covid-19: When will booster jabs be available in the...

US regulators may give approval for a third Pfizer jab at a highly-anticipated meeting on Friday.
Read more

Q&A: Kings of Convenience on new album and key...

The president of the Tokyo 2020 organising committee ruled out a cancellation or further postponement of the Olympics as doubts swirled among host cities and medical professionals whether the event can be held safely amid the pandemic.
Read more

There are fears that Mark Rutte could be the target of an attack or kidnapping.
Read more

The cast of Netflix's 'Outer Banks' answer the web's most searched questions about 'Outer Banks' and themselves. What's Chase Stokes's real name? Does Madelyn Cline have an Instagram? How did Madison Bailey meet Mariah Linney? How did Jonathan Daviss get into…
Read more

The Next New Urbanism

A wrap-up of the past year and a look to the future of New Urbs. The post The Next New Urbanism appeared first on The American Conservative.
Read more

Maverick Carter is the CEO of The SpringHill Company, LeBron James' entertainment and production company. He joined “CBS Mornings” for his first interview about the company's new investors, which include Nike, Fenway Sports Group, Epic Games and RedBird Capit…
Read more

Brooklyn Nets star Kyrie Irving, an NBA champion and seven-time all star, has become the face of a vocal minority of prominent NBA stars voicing their hesitancy toward the COVID-19 vaccine. The All-Star guard, who serves as vice president of...
Read more

The ruling marks the first time Serbian officials are convicted of crimes in Bosnia.
Read more

You could soon be playing PC games from this...

Cooler Master has unveiled the ORB X semi-enclosed workstation, though a price and release date have not been announced.
Read more

Team GB: Caroline Weir hopes Scots will get behind...

Scotland's Caroline Weir hopes her and Kim Little's inclusion in the Great Britain squad for this summer's Olympics will encourage other Scots to support the team.
Read more

Connie Gent was one of three children who were killed at a Derbyshire home.
Read more

Britney Spears spotted behind the wheel after her father...

Britney Spears was spotted behind the wheel of her Mercedes on Saturday, days after her father announced his plans to step down as her conservator. The pop star was recently granted permission to drive under her conservatorship.
Read more

The Grand Tour’s Lochdown special has a release date...

The latest episode of The Grand Tour gets a release date on Amazon Prime Video.
Read more