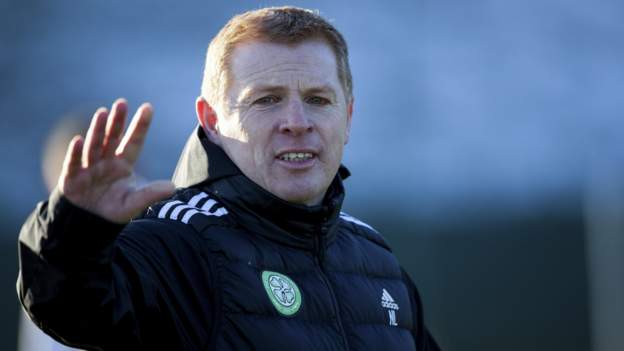 Neil Lennon says he will “get the itch sooner rather than later” to manage again after resigning his Celtic post last month.

The Northern Irishman ended his second spell in charge while 18 points adrift of Rangers, who have since claimed the Scottish Premiership title.

The vacant Aberdeen job has been linked to the former Parkhead captain.

“I’ve had a bit of a break, stayed in the house like everybody else is doing at the minute,” he told Radio 5 live.

“But I’m sure I’ll get the itch sooner rather than later. I’m really enjoying what I’m doing.”

Lennon, who was speaking as a BBC pundit at Manchester United’s Europa League match against AC Milan, had secured Celtic’s quadruple treble in December but an infamous January training camp to Dubai triggered further decline from his side.

The Parkhead club began the season aiming for an unprecedented 10th title in a row, but instead currently sit 20 points behind rivals Rangers with just the Scottish Cup to play for.

“I had 20 years as a player/coach/manager [at Celtic] so it’s a big part of my life,” added Lennon.

“I had a brilliant time at Celtic, I absolutely loved it. It just wasn’t our season, this season. The players have achieved incredible things up there in the last five, six years, it was a real privilege.” Giant floating robots and millennia-old odors make up a...

Artist Anicka Yi has taken over the London gallery's famous Turbine Hall with jellyfish-like "aerobes" that respond to their environments and museum visitors.
Read more

Norton Juster, the celebrated  children’s author who fashioned a world of his own in the classic “The Phantom Tollbooth” and went on to write such favorites as “The Dot and the Line” and “Stark Naked,” has died at 91
Read more

Pandemic made shortage of health care workers even worse,...

The COVID-19 pandemic has exacerbated the ongoing shortage of health workers, leaving many facilities short-staffed even as coronavirus cases plummet nationwide.
Read more

The Supreme Court will review bans on same-sex marriage in four of the 14 states where it remains illegal. As Jan Crawford reports, their eventual ruling will have a nationwide impact; Steve Hartman tells the story of Charles Clark, custodian at Trinity High …
Read more

Shirley-Anne Somerville says she will not blame anyone else if the 2021 awards system is not successful.
Read more

Percentage of Americans who say they won’t get vaccinated...

The percentage of Americans who say they will never get vaccinated against the coronavirus has dropped to a new low, according to a new poll.The Axios-Ipsos poll ...
Read more

Prince Harry on going back to London for Prince...

In the debut oa an Apple TV+ series with Oprah Winfrey, Harry reveals he "was worried" and "afraid" to return to the place that produced so much anxiety for him.
Read more

Interest in cryptocurrencies has surged over the past year, and policymakers are scrambling to catch up. Investors have rushed into major digital currencies such as bitcoin and a growing industry of financial products tie...
Read more

Returning vaccinated Canadians will be exempt from quarantine

Canadians who are fully vaccinated against COVID-19 and test negative for the virus will no longer have to quarantine after returning home to their country.Canada's government ...
Read more

Applications for U.S. jobless benefits unexpectedly rose last week, to the highest since mid-February, underscoring how the labor market is recovering in fits and starts.
Read more

Responding to the remarks, Taiwan's presidential office said its future lay in the hands of its people.
Read more

Frames worth tens of thousands of pounds have been taken across Scotland by what retailers claim is the same thief.
Read more

While a news anchor in Boston was reporting on a dog that was stolen from his owner inside of a parked car, last week, the reporter spotted the identical dog and the suspect....
Read more

Striker Alvaro Morata produces an unstoppable finish from a tight angle to give Spain the lead in the first half of extra time against Croatia.
Read more

Pope Francis presided over a Good Friday torch-lit Way of the Cross ceremony, praying that people don't lose their way amid their difficulties of the pandemic
Read more

The Spanish island of La Palma is still reeling from a volcanic eruption that began one week ago. Spreading ash and lava caused the local airport to shut down and roughly 6,000 people remain displaced.
Read more

Gayle King explores the extraordinary life and reign of...

"The Queen Carries On: A Gayle King Special" looks at Queen Elizabeth II's life through the eyes of people who have grown up with her, been honored by her and reported on her for decades. The CBS News special spans the milestones of her journey from princess …
Read more

The programme examines the impact of Apple's new operating system on the ad industry.
Read more

Intel in talks to acquire RISC-V firm SiFive for...

Could RISC-V do for Intel what Arm might for Nvidia?
Read more

Trump looking at ways to cut off N. Korea’s...

President Trump is in Poland Wednesday night -- the first stop on a trip that will take him to the G20 summit in Germany this week. Margaret Brennan, who is traveling with Mr. Trump, answers questions on how the president is handling the North Korea situation.
Read more

Many DACA applicants waiting for approval as court ruling...

A looming federal court decision threatens the Obama-era program, which offers deportation relief to undocumented immigrants who came to the U.S. as children.
Read more

White House explains why it can’t pinpoint number of...

The Biden administration has struggled to offer a specific number of Americans still in Afghanistan in recent days, prompting criticism from conservatives and others about the administration's preparedness to evacuate U.S...
Read more

In a new take on vaccine diplomacy, a free mobile Covid-19 testing and vaccination station is welcoming world leaders and delegates at this week's UN General Assembly, seeking to avoid a super-spreader event.
Read more

The pop star will be the first woman and the first non-Brit to be given the honour.
Read more

A report suggests Apple won't equip an iPad with an OLED screen until 2023, and that the iPad Pro won't be first in line.
Read more

California Gov. Gavin Newsom (D) attributed the rising number of coronavirus deaths in his state to what he described as misinformation being spread by "right-wing pundits" in politics and media."Time to be a littl...
Read more

Policybazaar IPO stacks up in a price comparison –...

A price comparison exercise just about stacks up for Policybazaar. The online supermarket for insurance and loans is the latest Indian technology company to file to go public in recent weeks. The money-losing SoftBank-backed Read more

‘America is not a racist country’: Sen. Tim Scott...

More than 10 million Australians go under lockdown in...

Online shopping soared, topping £110bn in sales, while adult sites were visited by half of over-18s.
Read more

Covid-19: Potential rise in England infections and Spain to...

Girl puts heart and sole into helping kids in...

Kerry Koranteng has been collecting shoes — but not for herself.
Read more

Protecting the Immune-Compromised Keeps Everyone Safe

It isn’t just about social responsibility. It’s about ending the pandemic and not giving  the coronavirus chances to evolve.
Read more

Cuomo Clings to Power as He Stares Down Impeachment...

New York Governor Andrew Cuomo is facing an impeachment inquiry led by the state’s own Democratic lawmakers as allegations of his misconduct mount, but he still has a number of advantages as he tries to cling to power.
Read more

Facebook announced that it will invest $800 million to build a data center in Mesa, Ariz., the company's first in the state, according to ...
Read more

SoftBank-Backed Ola Says IPO on Horizon in 1 to...

Bhavish Aggarwal, chairman and group chief executive officer of Ola, one of India’s largest startups, discusses his strategy. The ride-hailing service provider is backed by Japanese conglomerate SoftBank Group Corp. If all goes according to plan, his Ola Elec…
Read more

Moderna (MRNA.O) has pushed back its late-July vaccine shipment schedule for South Korea to August due to supply problems that will affect other countries waiting on Moderna shots, a South…
Read more

How North Korea’s ICBM test has “changed the game”

Justin Bieber is due back in court

The pop star has a hearing in Canada today, plus Aaron Paul talks "Need for Speed." Suzanne Marques has those stories and more in today's Eye on Entertainment.
Read more

The Taliban's forced evictions of Hazara families has sparked fears that a minority once targeted by the militant group is facing persecution again.
Read more

Chinese regulators are calling on gaming companies to protect kids’ physical and mental health amid a crackdown on entertainment in the country.The regulators on Wednesday said that companies such as Tencent Holdings and NetEase Inc. needed to...
Read more

Apple bringing Siri to third-party devices is an absolute...

Apple has taken one of the best aspects of Alexa and Google Assistant - third-party support - to give Siri a fighting chance to be the voice assistant for your smart home.
Read more

Indian Premier League 2021: The story of the Knight...

Donald Trump takes on the press

Trump says the media has spread "falsehoods" against him, but journalists don't have the power to "break" him.
Read more

The actress, photographed exclusively for EW by Lauren Dukoff on Sept. 7 in Los Angeles, takes on a role to Di for.

Fauci says it’s recommended to get same vaccine for...

Microsoft is drenching its Azure servers to boost performance

New Port Richey, Fla., bartender Patrica Smith is charged with battery after being caught on surveillance footage dragging an 84-year-old woman out of a bar by her arms. Tammie Fields reports.
Read more

Man who sexually assaulted woman aboard flight from Chicago...

A man convicted of sexually assaulting a 22-year-old woman aboard a flight from Chicago to Myrtle Beach during the summer of 2019 was sentenced late Thursday to two years in federal prison.
Read more

Growth in the current April-June period is expected to be faster still, potentially reaching a 10 percent annual pace or more.
Read more

Walmart: Customers want to get out and shop, says...

The retailer said that like-for-like sales in shops rose by 6% in the three months to 30 April.
Read more

Our Favorite Mattresses Are on Sale for Memorial Day

Whether you want to spend as little as possible or have no budget constraints, you can find a discounted mattress right now.
Read more

A British police chief has resigned after sparking an outcry with comments he made about how women should be more “streetwise” when he spoke about the abduction, rape and murder of a woman by a police officer
Read more

Jay Jacobs on the Markets (Radio)