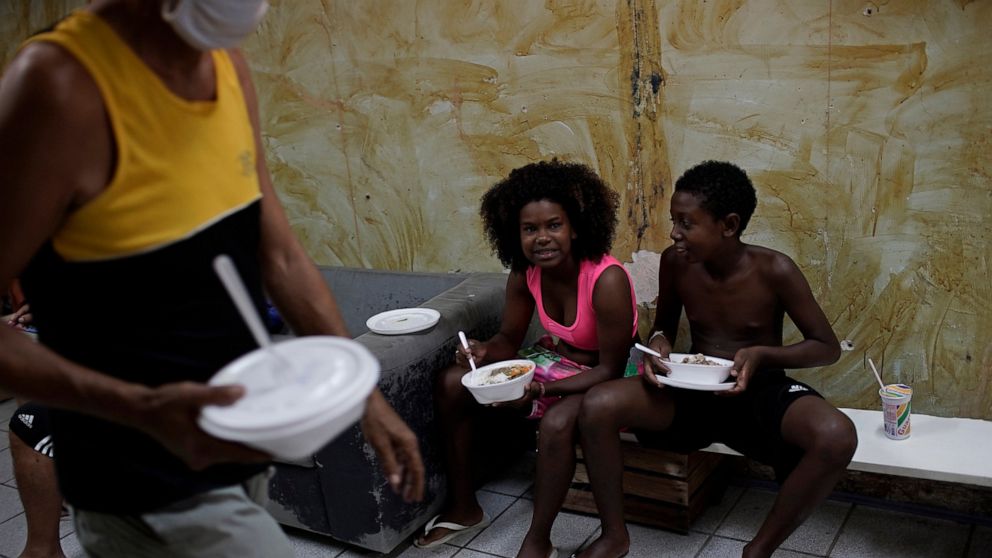 RIO DE JANEIRO — A measure to renew billions of dollars in emergency aid for millions of Brazilians struggling amid the COVID-19 pandemic passed in the lower house of Congress on Thursday, though lawmakers were still working on the details.

The bill, already approved by the Senate, allows for a maximum spending of 44 billion reais $7.9 billion though the initial measure did not specify how much families would receive, or for how long. Economy Minister Paulo Guedes earlier said it should be between $175$375, for up to four months.

A similar cash transfer program last year totaling 330 billion reais helped nearly 70 million Brazilians, nearly a third of the population, and was widely credited with helping to avoid an even worse economic crash. But it was discontinued on Dec. 31.

In Rio de Janeiros long-derelict port neighborhood, 34 year-old Tassiana Nascimento Costa said last years emergency fund had enabled her to feed her two children and that life had become a lot more difficult since it was discontinued.

Costa, who usually makes a living selling bottled water and other drinks in the streets, said her income fell from about 200 reais a day to just 50 or 70 reais. And with the recent resurgence of COVID-19 cases and deaths, shes afraid of catching the virus and is no longer working, relying solely on a family allowance, a separate government aid program.

If the amounts cited by Guedes are approved, the pandemid aid would bring her an additional $18 each month. As I cant work at the moment, this helps, Costa said. But it wont change my situation much.

Last years program boosted Brazilian President Jair Bolsonaros popularity, and his ratings have dropped since it came to an end.

It also helped stave off an even deeper recession in Latin Americas largest nation. Brazils economy contracted 4.1% last year, less than the 5.3% plunge forecast by the International Monetary Fund in April 2020.

Brazil is passing through its worst moment of the pandemic. The number of new COVID-19 cases is still surging, with a new record high 2,286 deaths reported on Wednesday. New measures aimed at limiting activity, or the strengthening of existing ones in some Brazilian states, could also add financial pressure to Brazil’s poorest. UNICEF warns Haiti is “nowhere near safe” as abductions worsen

China’s economy moderated in April from its record expansion in the first quarter as retail sales missed forecasts, suggesting the recovery isn’t yet on a solid footing as consumer spending lags.
Read more

Currently, several Latino young leaders are making their voices heard in the climate movement, but they can't do this alone. Latinos all over the United States, from all ages and occupations, we need to translate our preferences into a common voice.
Read more

An Afghan interpreter who helped rescue then-senator Joe Biden during a congressional delegation visit to Afghanistan in 2008 has been evacuated from the country.
Read more

Jason Crow Says ‘I Share That Question’ on Whether...

The congressman said Sunday it's "frankly very depressing" to recognize the influence that Trump still has over Republicans.
Read more

Cargo ship splits in two after running aground in...

Biden says U.S. “not looking for conflict” with Russia...

Things are getting confusing in the nation’s capital these days. Words that we thought we knew the meaning of are regularly twisted by the Biden administration to mean surprising things.
Read more

New research from Microsoft and LinkedIn highlights the struggle to balance the benefits of remote and office work.
Read more

Windows 11 SE could take cues from the worst...

Microsoft may be sticking with an S mode experience for Windows 11, the rumor mill reckons.
Read more

Michael Sherwin, the federal prosecutor who previously led the criminal investigation into the Capitol riot, said former President Trump could be culpable for his role in the raid.Sherwin told CBS News’s “60 Minutes” in an interview that aired...
Read more

More than a decade after they were arrested and sentenced to life in prison in their newborn daughter's death, Ashley and Albert Debelbot are free and struggling to start over
Read more

The sanction authorized by the White House target three North Korean organization, including the government's intelligence agency and the agency that sells weapons to other countries; and, it's not often a team is recognized for its losses. But in Minnesota, …
Read more

Hall of Fame boxer Oscar De La Hoya has been hospitalized with Covid-19, according to social media posts from the fighter.
Read more

‘Pokémon Go’ trial gives players a peek at what...

Pokémon Go is giving some players the chance to peep the contents of their eggs in a move that could be aimed at preempting legal restrictions on loot boxes in Europe. Germany and Belgium have respectively passed laws limiting games that carry the ga...
Read more

At 34, ‘Mommy Rocket’ Fraser-Pryce sprinter to beat in...

Every time Shelly-Ann Fraser-Pryce steps on the track, some sort of record is in jeopardy.
Read more

Arkansas governor: Veto on trans youth bill was a...

Arkansas Gov. Asa Hutchinson (R) said on Sunday that his decision to veto the transgender youth healthcare ban was a "message of compassion and conservatism," saying it aligned with his conservative belief in limite...
Read more

After losing everything to a tornado, Jake Sansing decided to travel 10,000 miles by foot across America for three years.
Read more

Lourdes: Pilgrims flock to French sanctuary online in their...

With travel limited, millions are joining e-pilgrimages to a cave famed for its miraculous healings.
Read more

Starting Saturday, Washington, D.C. residents ages 12 and older who get their first COVID-19 shot could have a chance to receive a $51 gift card in a new push by Mayor Muriel Bowser (D) to get more people vaccinated against the virus.
Read more

China sticks to goal of having carbon emissions peak...

Konami has confirmed that it’s pulling out of E3 2021, but says it does have projects in development.
Read more

French Church and state at odds over sex abuse...

Officials have extended the state of emergency in several regions until the end of the month.
Read more

Lakshmy Pengelly says her savings are "running out" amid a big fall in residents during the pandemic.
Read more

Weinstein sues his ex-attorney to recover $1M in legal...

Former film producer Harvey Weinstein is suing his former criminal defense attorney to recover $1 million in legal fees, according to a report from ...
Read more

Cybercriminals have found a way to get their malware...

The U.S. continues to make strides in the fight against the coronavirus pandemic. More states are preparing to reopen as vaccinations increase and infections go down. Danya Bacchus has more.
Read more

The best SSD upgrade I ever made is cheaper...

Samsung SSDs are about the best you can get and on Prime Day you get a rare chance at some big discounts. Here’s why they’re one of the best upgrades you can make.
Read more

Singapore will recalibrate its foreign worker policies to balance between remaining accepting of those from overseas, and addressing the economic and social concerns of its citizens, Prime Minister Lee Hsien Loong said.
Read more

Microsoft unveils its most secure laptop yet and it’s...

How A Sisterly Friendship Helped Florence Pugh Through Black...

Zverev comes back from two-sets down to beat qualifier...

Sixth seed Alexander Zverev rallied from two sets down to beat qualifier Oscar Otte 3-6 3-6 6-2 6-2 6-0 in his opening round of the French Open on Sunday.
Read more

Hispi, a ringed seal pup who was rescued hundreds of miles away from his natural habitat, is released into the wild.
Read more

The Queen and Prince Philip: An enduring royal romance

During their 73-year marriage, he was the Queen's public support and the person who knew her best.
Read more

Lizzo And Cardi B Glitter As Golden Muses In...

Grammy-winning singer Lizzo is back, ringing in a new era with her single 'Rumors' featuring Cardi B.
Read more

The year after British novelist Jackie Collins died following a private battle with breast cancer in 2015, a listing went up for her 21,784-square-foot house -- an 8-bedroom Beverly Hills property inspired by the clean lines and Pop Art color blocking of Davi…
Read more

Music legend Cher has apologized for a tweet in which she theorized that she could have prevented George Floyd's death.
Read more

Why Global Supply Chains Have Become So Snarled

There are more than a few reasons, but they all add up to trouble through 2022.
Read more

High winds cut power to thousands of Skye and...

Winds gusting to more than 70mph leave about 16,000 properties across Skye and Uist without electricity.
Read more

Presented by Facebook Eight Democrats will take the stage tonight for their final debate before next week's mayoral primary election, hosted by POLITICO, WNBC...
Read more

TikTok teams up with Shopify to offer in-app purchases

Shopify merchants with TikTok for Business accounts will soon be able to sell their products on the short-form video platform.
Read more

Players from the British and Irish lions squad say their training camp in Jersey is a great way to prepare for their tour to South Africa.
Read more

Judge turns down defense request to sequester jury in...

The judge in the trial of Derek Chauvin turned down the defense's request on Monday to sequester the jury after a police officer ...
Read more

OnePlus Q-Series TVs to get Camera App via update...

OnePlus is all set to introduce a new Webcam for its Q-Series TVs and it has an update incoming which brings with it the Camera App to work with the new device.
Read more

Covid-19: Thousands to get vaccine as SSE Arena set...

Jabs will be delivered at the Belfast venue up to 14 hours a day and seven days a week from Monday.
Read more

Sean Hannity took issue Thursday with the way President Joe Biden conducted his summit with Russian President Vladimir Putin and the way the media chose to cover what the "Hannity" host called a "trainwreck."
Read more

The Latest: Virus rules in Seoul extended another month

A countrywide conversation is building in Chile, where many believe democratic progress has been obstructed by the 1980 constitution crafted under the former dictator, Gen. Augusto Pinochet
Read more

Kinzinger, Gaetz get in back-and-forth on Twitter over Cheney...

Reps. Adam Kinzinger (R-Ill.) and Matt Gaetz (R-Fla.) got into a back-and-forth on Twitter Tuesday evening ahead of the expected vote to oust Rep. Liz Cheney (R-Wyo.) from her perch in House GOP leadership.Gaetz re...
Read more

Eight skydivers and a pilot die in a plane crash close to the runway at Orebro airport.
Read more

An Energy Crisis Is the Latest Threat to Food...

An energy crisis is exposing the vulnerability of food supply chains.
Read more

One of the world's key shipping routes has been blocked after a huge ship ran aground.
Read more

Presented by Facebook  NEWS THIS MORNING OK, but instead of calling it 'The Jan. 6 Commission', what if we called it 'The Commission to Investigate Jan. 6': ...
Read more

Reports in foreign media outlets were creating "hype" around China's next-generation stealth bomber, which has yet to be officially revealed, said Communist Party newspaper the Global Times.
Read more

The suspected gunman accused of killing one person and injuring a dozen others in a series of drive-by shootings allegedly thought people were after him because of an unrelated shooting, police in Arizona said.
Read more

Canoo unveils what might be the world's cutest electric pickup

Stimulus payments will start going out this weekend