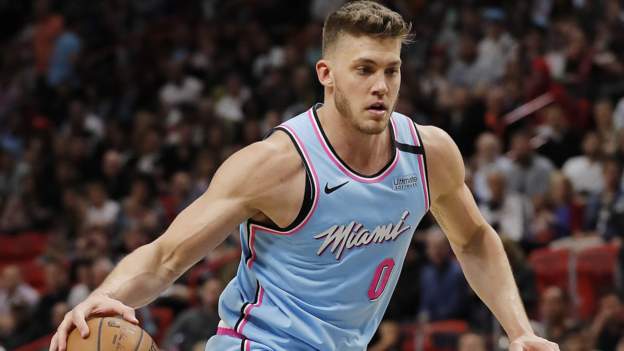 Miami Heat forward Meyers Leonard has been fined $50,000 (£36,000) after using an anti-Semitic slur during an online game stream.

Leonard, 29, has also been banned from all Heat facilities and team activities for a week.

The comment was made during a Call of Duty game on Twitch on Monday.

“He said something that was extremely distasteful and hurtful and we’re left with the aftermath of that,” said Heat coach Erik Spoelstra.

In a statement, NBA commissioner Adam Silver said Leonard’s comments were “inexcusable”, while adding that he will be required to attend a “cultural diversity” programme.

Leonard apologised for using the slur in an Instagram statement on Tuesday and said he had not known what the word meant when he used it.

“It doesn’t matter the intent. It’s not right,” added Spoelstra, who said he spoke to Leonard after reading his apology.

Heat captain Udonis Haslem said: “We can’t tolerate that here. Right is right, and wrong is wrong. And since I’ve been here in this organisation, to the day I leave this organisation and beyond, we’re going to try to be on the right side of everything – especially issues like this.”

The former Portland Trail Blazers player is out for the rest of the season after shoulder surgery last month.

He is known to be an avid online gamer and has tens of thousands of followers on the Twitch platform.

E-sports organisation FaZe Clan said it was “cutting ties” with him on Tuesday and a number of other gaming companies, including Astro Gaming and Origin PC, have also severed their relationships. The Rev. Jesse Jackson and his wife Jacqueline are "responding positively" to their COVID-19 treatment after being hospitalized with the virus, family members said on Sunday.The civil rights lead...
Read more

Latest bipartisan gang tries to save Senate from itself

It’s no accident that 10 GOP senators are in the group: That's the number needed to break a filibuster.
Read more

President Biden had an informal meeting with French President Emmanuel Macron during the first day of a Group of Seven (G7) summit in the United Kingdom on Friday, the first substantial one-on-one interaction between the two leaders since Biden took office.
Read more

Scott Pelley: The impact of terrorism on the human...

CBS News anchor Scott Pelley reflects on how terrorism has affected its victims and the choices we make in dealing with these dramatic, life-changing events.
Read more

Poland's parliament passed legislation on Thursday that human rights advocates say aims to legalize pushbacks of migrants across its borders in breach of the country's commitments under international law.
Read more

The Nobel Peace Prize winner who’s presiding over a...

Chief lawyer for Myanmar’s Suu Kyi says he has...

The head lawyer representing Myanmar's ousted leader Aung San Suu Kyi said on Friday he had been issued a gag order by authorities in the military-ruled country.
Read more

House Intel Chair: May have been “incidental collection” of...

In a surprise announcement Wed., House Intelligence Committee chairman Rep. Devin Nunes said he has seen intelligence that there may have been "incidental collection" of Trump communications. CBSN's Reena Ninan and Vladimir Duthiers have the latest on the sto…
Read more

Tesla has approached the Indian Government to reduce the taxes on imported electric cars to 40% to boost EV adoption.
Read more

Equal Pay Day in the spotlight on Capitol Hill

PAY FOR PLAY? You might have seen one of the viral videos or tweets, where women playing in the NCAA basketball tournament highlighted...
Read more

Taiwan needs to have long-range, accurate weapons in order to properly deter a China that is rapidly developing its systems to attack the island, Defence Minister Chiu Kuo-cheng said on Monday.
Read more

Every jihadist group around the world will be cheering, the former UK prime minister says.
Read more

England seamer Ollie Robinson says he is "embarrassed" by historical racist and sexist tweets that were made public during his Test debut against New Zealand.
Read more

Gas prices have hit a 7-year high and rental cars are selling out across the country. Meanwhile, airports and airlines are short staffed as travelers take off for the holiday weekend. CBS News transportation correspondent Errol Barnett reports and WBZ meteoro…
Read more

Sen. Ted Cruz, R-Texas, said Sunday that President Biden’s vaccine mandate for private businesses is designed to fail and being used only as a distraction from his "catastrophe" in Afghanistan.
Read more

Parents across the U.S. continue to speak out and protest against critical race theory (CRT) being taught in their children’s’ schools. The controversial and complicated theory regarding racism in our country’s institutions has become a political lightning ro…
Read more

CanSino Biologics Inc. said it’s in talks with a number of European countries about orders for its Covid-19 vaccine, which if signed would mark the first recognition of Chinese drugmakers’ inoculations in the developed world amid concerns over their relative …
Read more

Covid: India minister in UK may have been exposed...

Money Stuff: You Have to Get the Right Ticker

WiZ has almost fixed one of the biggest frustrations...

WiZ has expanded its Connected with WiZ program to include a range of Philips Smart LED bulbs, but sadly they’re not the Philips Hue bulbs we know and love.
Read more

When it comes to fending off global inflationary pressures, it seems not even trade protectionism offers much protection.
Read more

Blinken and Lavrov to hold first high-level meeting of...

US Secretary of State Antony Blinken is set to meet Russian Foreign Minister Sergey Lavrov Wednesday, the first high-level encounter between the US and Russia since President Joe Biden took office that comes amid heightened tensions between the former Cold Wa…
Read more

Out of the blue: ‘Captain DPRK’ brightens up North...

A North Korean parachutist has lit up social media with his shiny blue jumpsuit as he posed with ranks of olive-green clad military men and leader Kim Jong Un after taking a jump at the opening ceremony of a defence exhibition.
Read more

Microsoft is finally solving this Windows copy and paste...

Keep track of all your vital files with upcoming OneDrive update.
Read more

Noreen Wredberg and her husband, Michael, weren't really expecting to find anything at Arkansas' Crater of Diamonds State Park, she said, and she wasn't sure what she had found when she picked up a stone.
Read more

From Saigon to Kabul, leaving must not mean giving...

The U.S. must never abdicate or duck the responsibility to use its influence and the leverage it does have to advocate forcefully for prisoners of conscience and to press for human rights reform.
Read more

Doja Cat’s Planet Her Has a Song For Every...

Russia says it is ending military buildup at Ukrainian...

Russia on Thursday said it would be ending its massive military buildup at the Ukrainian border, which has increased tensions with Ukraine, the United States and other western countries. Russia s...
Read more

League 1 and 2 clubs had a delayed start to the season then were suspended, so what's the state of play before Saturday's resumption?
Read more

Top House Republicans on Monday called on President Biden to visit the U.S.-Mexico border amid what both parties are calling a "humanitarian crisis" caused by the surge of migrants and unaccompanied children attempting to...
Read more

Memphis Depay and Denzel Dumfries score in a comfortable 2-0 win for the Netherlands over Austria as the Dutch book their place in the knockout stages of the European Championship.
Read more

Live music is back… behind a New York shop...

Musicians have been able to serenade New Yorkers from the inside of empty shops.
Read more

Ether Rises to Record as Crypto Rally Broadens Beyond...

For many House Republicans who voted to overturn the election results, small donations helped offset the loss of corporate PAC money.
Read more

When suppliers make green energy the default choice, consumers stick with it even if it's costly.
Read more

Families Of The Mafia Is Returning To MTV

Watch a first look of MTV's 'Families of the Mafia,' which is returning on July 15.
Read more

Mondaire Jones Says Manchin Op-Ed Might as Well Be...

The West Virginia Democratic senator has come under fire for refusing to support the For the People Act following an op-ed he wrote for the Charleston Gazette-Mail.
Read more

Powell signals Fed will soon cut back on stimulus

Federal Reserve Chair Jerome Powell said Friday that inflation has risen enough to warrant a reduction in the central bank’s support for the recovering economy, potentially within months.In a Friday virtual speech, Powell said that the...
Read more

Reaction to Biden-Putin summit ranges from ‘positive’ to ‘disturbing’...

A woman who accuses former Fox News host Bill O'Reilly of workplace harassment when he was her boss in the early 2000s is opening up for the first time about her claims, saying she felt bullied...
Read more

U.K. Reports Most New Coronavirus Cases Since Start of...

A surge in cases of the delta variant continued to push the U.K.’s coronavirus infection numbers to levels not seen since the winter, even with most of the adult population now fully vaccinated.
Read more

Hurry and save on the best wireless headphones you...

If you live in the US or UK, there are some great deals for the Sony WH-1000XM3 and Sony WH-1000XM4 wireless headphones available right now.
Read more

Senate Majority Leader Chuck Schumer (D-N.Y.) said on Monday that Congress needs to get a bill raising the debt ceiling to President Biden's desk by the end of the week, an ambitious timeline given an entrenche...
Read more

After seven decades, the remains of a Korean War hero were welcomed home to Kansas. David Martin shares more on his life.
Read more

The Oscar nominations for 2021 were dominated by streaming movies thanks in part to the pandemic, with 'Mank' and 'Ma Rainey's Black Bottom' some of the frontrunners.
Read more

Irish 10-year-old William Woods has been cow-unting his blessings after buying calves with the winnings from a prize draw.
Read more

When Tom Brady left the Patriots to join the Tampa Bay Buccaneers last March, the future Hall of Fame quarterback signed a two-year, $50-million contract. However, reports have surfaced that Brady might want to play in Tampa beyond the 2021 NFL season.
Read more

Berkshire Hathaway vice chairman Charlie Munger praised the Chinese government for silencing Alibaba's Jack Ma in a recent interview, adding that he wishes US financial regulators were more like those in China.
Read more

A year later than planned, due to the pandemic, the Tokyo Olympics are underway. Yet Covid cases in the capital are rising, and a recent poll showed that 55% of people in Japan were opposed to the Games being held in Tokyo with fears that it could become a su…
Read more

Clyburn urges Biden to back filibuster changes for election...

The U.S. intelligence community said Thursday that it is unsure whether the coronavirus was more likely to have come from a lab or through human contact with infected animals.A statement from the Office of the Director of National...
Read more

Top lawmakers to get security briefing ahead of far-right...

The U.S. Capitol Police chief is briefing House and Senate leaders today, ahead of a rally planned for Saturday by far-right groups who say they want "justice" for people charged in connection with the January 6 Capitol riot. CBS News congressional correspond…
Read more

UN Pressure on Ethiopia Ramps Up as Humanitarian Crisis Deepens