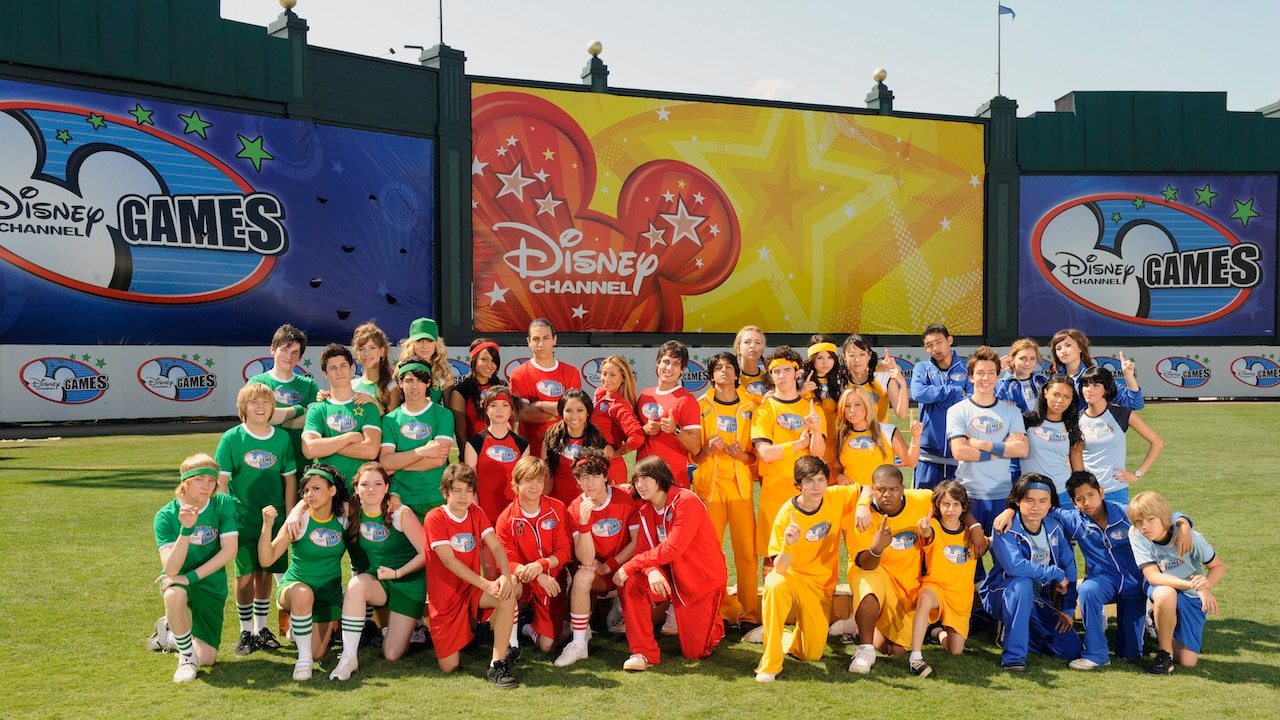 If you wanna know, whos the best. Its the D-I-S-N-E-Y Disney Channel Games!

That was the chant back in the Summer of 2008 when thirty-seven of Disney Channels biggest stars from around the globe (including Selena Gomez, Demi Lovato, and the Jonas Brothers) descended upon the ESPN Wide World of Sports Complex in Walt Disney World Resort to compete in the Disney Channel Games.

Now streaming on Disney+, you can relive all the rough and tumble challenges and re-watch all five episodes of tough competition!

Cheer on the Red Team Inferno, the Green Team Cyclones, the Blue Team Lightning, and the Yellow Team Comet. Each with one goal in mind: emerge victorious to claim the Disney Channel Games Cup and win money for their charity.

With unforgettable challenges that include weaving through an obstacle course while linked together, matching their rival teammates to their baby pictures, a human foosball game, and, of course, the UltraMega Ultimate Obstac-tacular Challenge. Its non-stop Summer fun. Plus, each episode ends with a concert performance from a Disney Channel Star or group including two from Miley Cyrus. Amazon offers bonuses of up to £3,000 in run-up to Christmas

Woman ‘Had Feeling’ of Being Watched in Bed, Security...

Security footage showed the man moving a fan from an open window and climbing into the bedroom of a woman's two children, aged 3 and 4.
Read more

An 86-year-old sugar mill worker in Florida who had been on the job for more than three decades shot and killed his boss Friday morning after he was told his services were no longer needed, authorities said.
Read more

President Joe Biden marked the sixth anniversary on Sunday of his son Beau's death with a visit to his grave site and a speech about grief to military families and veterans, on the eve of the Memorial Day holiday commemorating the country's military dead.
Read more

The surgeon general is warning Americans about the "urgent threat of health misinformation" amid the government's current push to boost stalling vaccination rates.
Read more

Windows 10 update is reportedly breaking the taskbar for...

Some users are complaining that the June update is seriously messing with their PC.
Read more

Chinese ride-hailing firm Didi sued in US as shares...

The lawsuits come after a crackdown by Beijing triggered a slump in its share price of more than 20%.
Read more

Indian tech braces for its second coming of age...

Turn rupture into repair: How to navigate relationship arguments...

You can control how you repair things, using these tried-and-true techniques.
Read more

Three-time Grand Slam champion Angelique Kerber is the latest tennis player to pull out of this summer's Olympic Games in Tokyo.
Read more

Taylor Fritz beat No. 3 seed Alexander Zverev 4-6, 6-3, 7-6 (3) on Friday to reach the semifinals of the BNP Paribas Open in front of a hometown crowd, scoring the biggest win of his young career.
Read more

President Biden on Friday defended his $1.9 trillion American Rescue Plan after a disappointing jobs report, arguing that the new data prove the necessity of the legislation and that it would take more time for the econom...
Read more

PM and chancellor to self-isolate after criticism

Eriksen ‘fine under circumstances’ as he recovers from cardiac...

Denmark midfielder Christian Eriksen says he is "fine under the circumstances" as he continues his recovery from a cardiac arrest.
Read more

Gaetz associate Joel Greenberg scheduled to be sentenced in...

This smart home gadget stopped my fears after leaving...

Smart plugs let you switch appliances on and off from a smartphone. Here's how one stopped me worrying when I leave the house.
Read more

When more than 100 Africans hoping to reach Europe on a rubber boat called repeatedly for help in late April, a rescue never came
Read more

More New Yorkers than Connecticut residents were vaccinated at a Connecticut CVS before state officials went to investigate in early February, ...
Read more

Over the course of 54 days, the sub-adult shark has travelled 1,080 miles from North Carolina to Rhode Island.
Read more

Realme has launched its first set of smart TVs for 2021 and they’re much more affordable than last year’s SLED TV and come in two screen sizes.
Read more

Manatees are dying in droves this year. The die-offs...

Decades of environmental stress culminated this year in one of the worst manatee die-offs in recent history: As of May 21, at least 749 manatees have died in Florida in 2021, in what has been called an unusual mortality event.
Read more

The futures of Medina Spirit, the winner of the Kentucky Derby, and trainer Bob Baffert are in limbo after the horse failed a drug test after its big win. David Begnaud has more.
Read more

The coronavirus outbreak in Michigan, which has emerged as the worst U.S. hotspot, is surging in a critical factory for Stellantis NV’s Ram pickup truck with an estimated 10% of production employees out for Covid-related reasons.
Read more

England coach Chris Silverwood says his side are "battle hardened" having played a lot of Test cricket before the Ashes.
Read more

Moto G10 Power sale in India will start in India today via Flipkart. The device is priced at Rs 9,999.
Read more

PS5 owners can now buy another PS5… thanks to...

Sony is sending out purchase invitations to those who already own a PS5, which might frustrate those still on the hunt for the elusive console.
Read more

Lebanon's currency crashed past a milestone on Sunday reaching a new low against the dollar, as the country's financial meltdown and political deadlock linger.
Read more

Josh Reddick hit a two-run double in the bottom of the 10th inning and the Arizona Diamondbacks rallied to beat the New York Mets 6-5 on Tuesday night.
Read more

Open: This is Face the Nation, October 11

The latest on the 2016 campaign trail, the race for House speaker, and the crisis in Syria, with guests Donald Trump, Ben Carson, Rep. Mick Mulvaney, R-South Carolina, and others
Read more

Glasgow museums and venues to reopen from 26 April

PUBG Mobile and Garena Free Fire might be banned...

PUBG Mobile and Garena Free Fire may be facing a ban in Bangladesh after government bodies call for it, citing gaming addiction a problem among the youth.
Read more

New data from the Department of Homeland Security indicates the number of unaccompanied children in Border Patrol custody has plummeted since late March. That trend can be seen at one of the U.S.'s largest border patrol facilities for minors, in Donna, Texas.…
Read more

Biden: US ‘coming back together,’ but COVID not yet...

President Joe Biden celebrated the second July Fourth holiday of the coronavirus pandemic by declaring that “America is coming back together.”
Read more

Dungannon: Man arrested on suspicion of murder after child’s...

A 32-year-old man is in custody on suspicion of murder after the young girl died in hospital.
Read more

You could soon be playing PC games from this...

Cooler Master has unveiled the ORB X semi-enclosed workstation, though a price and release date have not been announced.
Read more

Environment ministers from seven leading industrialized nations agreed Friday to accelerate efforts to slow global warming, including a commitment to end government support for new coal-fired power plants by the end of this year
Read more

A Virginia county becomes ground zero in the fight against wokeness, complete with lies, blacklists, and creeping authoritarianism. The post Critical Race Theory’s Battle in the Burbs appeared first on The American Conservative.
Read more

The spokesman for resurgent Tigray forces in Ethiopia says if forces from the neighboring Amhara region launch a threatened offensive on Saturday, “we’ll extend a warm welcome.”
Read more

Australia has decided against using the Johnson & Johnson vaccine due to a risk of blood clots."J&J is another viral vector vaccine and we have no advice recommending, at this point, that...
Read more

Move by Catholic bishops against Biden brings howls of...

Catholic bishops who voted to advance an effort that could deny President Biden communion over his stance on abortion are being accused of hypocrisy by critics of the decision.Biden, just the second Catholic U.S. p...
Read more

Watch the best shots from Naomi Osaka's first-round victory over China's Zheng Saisai as she advances to the second round of the women's singles competition in her home country of Japan.
Read more

Paying for Taco Bell With Dogecoin May Be Soon...

How about paying for your Taco Bell order with Dogecoin? Or some of Whole Food’s avocado ice cream with Bitcoin.
Read more

Conspiracy theories thrive on the internet. A frightening incident at a Washington pizzeria last week is ramping up concern of the real-world implications of fake news stories. Joseph Parent, co-author of "American Conspiracy Theories" -- also a political sci…
Read more

Leicestershire captain Callum Parkinson takes the final wicket to beat Sussex after earlier Division Three wins for Kent and Middlesex - and one in Division Two for Gloucestershire.
Read more

Apparently the Google Pixel 6 XL will get a whopping 5x optical zoom, which trumps all other Pixel phones.
Read more

The future of students, relatives and staff of the American University of Afghanistan remains uncertain amid the Taliban takeover of the country, according to the institution's president.Ian Bickford, president of...
Read more

Adventurer’s plan to walk on water to New York...

Extreme athlete Ray "Reza" Baluchi planned to spend the next three or four weeks on the Atlantic Ocean "walking" from Florida to New York in a hamster wheel-like vessel he calls his bubble.
Read more

Nearly all security professionals are struggling to secure IoT...

Nasty Windows 10 Defender bug could clog up your...

Now that the bug has been fixed, here’s how to be rid of the thousands of files this Windows 10 Defender problem had created.
Read more

A cease-fire between Israel and Palestinian militant group Hamas, as well as President Biden's newest offer on infrastructure to Republicans are expected to dominate this week's Sunday talk sho...
Read more

Kenta Maeda was flawless through four, walking one and striking out five.
Read more

For decades, the Czech capital has been swamped by an ever-rising tide of raucous tourists, then the pandemic gave locals a chance to reclaim the city's historic center. Now they're looking for ways to keep the party scene at bay.
Read more

Speaking in court on Monday, the entrepreneur said he prefers spending time on design and engineering.
Read more

Iowa leads the nation in interceptions, and Penn State features one of the most dynamic passing combinations in Sean Clifford and Jahan Dotson.
Read more

Bucks to increase fan attendance to 3,280 per game

HBO Max will show off its streaming library with an interactive SXSW...