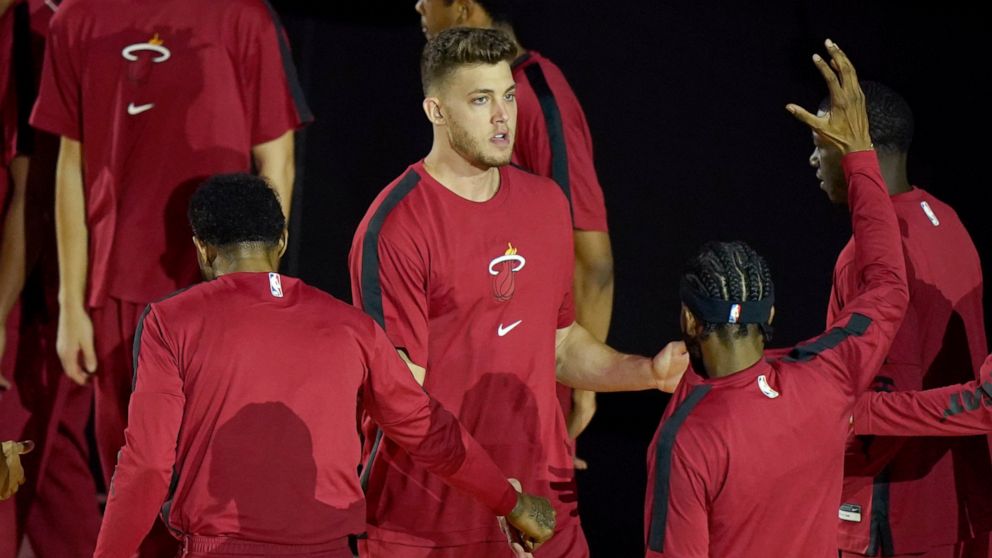 MIAMI — The NBA has fined Meyers Leonard $50,000 and suspended him from all Miami Heat facilities and activities for one week, in response to his use of an anti-Semitic term.

Meyers Leonards comment was inexcusable and hurtful and such an offensive term has no place in the NBA or in our society, Silver said.

Leonard apologized for using the term, insisting he did not know what it meant when he used it Monday. The Heat learned of the matter Tuesday, and Leonards future with the team is now in serious doubt. He will not play again this season because of a shoulder injury.

Silver said Leonard spoke Wednesday to representatives of the Anti-Defamation League to better understand the impact of his words and we accept that he is genuinely remorseful.”

We have further communicated to Meyers that derogatory comments like this will not be tolerated and that he will be expected to uphold the core values of our league equality, tolerance, inclusion and respect at all times moving forward,” Silver said. Gillespie leads No. 7 Villanova in 72-46 rout of La Salle

McConaughey says he won’t seek political office ‘at this moment’

Copyright bots powered by a 1998 law threaten the...

Archaic intellectual-property laws like the Digital Millennium Copyright Act must be amended to ensure that online copyright enforcement is never used to withhold vital government information from the public.
Read more

After Becca Periera lost her job as a receptionist mid-pandemic, she turned to her family's Goan roots and her great-grandmother's handwritten recipe book. Today she's running one of Toronto's most exciting culinary pop-ups. Read more via Businessweek: https:…
Read more

Seizing a once in a lifetime opportunity to end...

Congress must not squander this opportunity. It must fund and target housing investments to end homelessness and put the nation on a path to housing stability and equity for all.
Read more

Mike Lindell Says Donald Trump Will Be Back in...

China Evergrande Group’s unusual silence about a dollar-bond interest payment that was due Thursday has put a focus on what might happen during a 30-day grace period.
Read more

New Orleans officials have lifted the city's curfew a week and a half after Hurricane Ida hit the area.The curfew had been in place since last Tuesday in what officials said was an attempt to pre...
Read more

Tencent, Meituan Dumped by China Traders Who Used to...

Chinese investors are turning against the nation’s technology giants, removing a pillar of support that helped the sector through previous market routs.
Read more

A man from California on Monday was arraigned on one misdemeanor count of violating the Endangered Species Act for allegedly kidnapping a ring-tailed lemur from the San Francisco Zoo's Lipman Family Lemur Forest.Co...
Read more

Terry McAuliffe, the Democrat running for governor in Virginia during an off-year election, was seen in a video teleconference raising concern about President Biden’s popularity in the state amid the closely watched election seen as a bellwether.
Read more

Three is now offering a fantastic 30GB of data...

Looking for a new SIM only deal? This flash sale from Three could be the perfect option right now.
Read more

Israel unleashes strikes after vowing to press on in...

Israel has unleashed a wave of airstrikes across the Gaza Strip, killing at least one person and wounding several others
Read more

England defender Reece James says his house was broken into while he was playing for Chelsea against Zenit St Petersburg in the Champions League on Tuesday.
Read more

A report which contains key details on an IRA cell's activity is set to be omitted from an inquest.
Read more

Wales demonstrated great resolve in their 1-0 defeat against Italy as they clung on with 10 men for a result which was enough to secure their place in the second round of Euro 2020.
Read more

Rep. Elise Stefanik (R-N.Y.) is now a mom - and her newborn son is sporting some "chubby cheeks and charm."The chair of the House Republican Conference and her husband, Matt Manda, welcomed their first child, Samue...
Read more

One in seven bookings failing to show up at...

A report looking into the issue of no-shows says the hospitality sector loses £17bn a year from it.
Read more

Residents in Kongsberg react to the bow and arrow attack in their neighbourhood.
Read more

Boris Johnson, of 10 Downing Street, is named on a court judgement database over an unpaid debt of £535.
Read more

Steven Englander on the Markets (Radio)

Why some say this Nevada town siren is a...

The siren has been called a "piece of historical trauma" over its disputed link to sundown towns.
Read more

Breakthrough in electronic display fabrics could help pave the...

A breakthrough in electronic display fabrics could help pave the way for smart clothing.
Read more

Legal challenges have put the game on hold.
Read more

President Biden's remarks on the progress in the fight against the coronavirus pandemic were "the most disgusting, propagandistic speech" any politician has ever given, Mark Levin told "Hannity" Thursday.
Read more

Battlefield 6 could add robot dogs to your arsenal

Bernie Sanders says he plans to persuade progressives to...

Sen. Bernie Sanders (I-Vt.) suggested he will try to persuade progressives to help pass the $3.5 trillion spending package the Senate approved early Wednesday, as Democrats work to keep their caucus together in the ...
Read more

Ethiopia's military is calling on veterans to rejoin the army as two aligned rebel groups threaten the capital, marking the latest sign the government is marshaling its power to defend Addis Ababa.
Read more

Apple’s WWDC 2021 event is just around the corner and we’re expecting lots of software, with some actual devices too.
Read more

All three officers face up to life in prison without parole if convicted.
Read more

Republicans are divided on just how tough to make the reconciliation off-ramp if Democrats deploy the special budget process to lift the debt ceiling.
Read more

Here is a look at some upcoming events of interest to the bankruptcy law community. Unless otherwise noted, all times are local, and court appearances are virtual due to the COVID-19 pandemic.
Read more

We tell Syria’s human stories so that the ‘victors’...

Sky’s iPhone 13 deals offer some of the cheapest...

Poll: Most in US who remain unvaccinated need convincing

Fewer Americans are reluctant to get a COVID-19 vaccine than just a few months ago, but questions about side effects and how the shots were tested still hold some people back
Read more

Newly-promoted Brentford will host the first game of the Premier League season when thy welcome Arsenal on Friday, 13 August.
Read more

Pakistan's National Security Adviser Moeed Yusuf on Wednesday said the world must engage with Afghanistan, warning that not doing so could lead to a repeat of the Taliban's regime in the 90's.
Read more

Per a TMZ report on Wednesday, law enforcement and emergency responders received a call of a suicidal person at Scott’s home in Michigan on July 30. When they arrived, she allegedly became combative with personnel who were checking her vital signs and reporte…
Read more

Why women may wait decades for an ADHD diagnosis

At least tens of thousands in the UK, it is estimated, are not receiving the help they need.
Read more

Howard Beckett had apologised for posting that Home Secretary Priti Patel "should be deported".
Read more

An 82-year-old Idaho woman said her flag supporting President Biden was torn down and a garbage bag full of feces was left on her front yard this week.
Read more

Teen teen mother shot by school officer to be...

Manuela Rodriguez, an 18-year-old mother who was shot by a school safety officer in Long Beach, California, will be taken off life support, her family said.
Read more

OnlyFans have gone back on their decision to ban pornography from its platform, but have they lost the trust of sex workers as a result?
Read more

Here's everything we know so far about Dying Light 2: Staying Human.
Read more

Just a day after 6-year-old Aiden Leos' funeral, two people have been arrested in connection with his death in an apparent road rage shooting on a California highway. CBS News hears from Aiden's mother who spoke at his funeral and she says her son's existence…
Read more

Marc Allera wins our Person of the Year award for a third time.
Read more

Pope Francis described President Biden as a "good Catholic" during their meeting on Friday, according to Biden, and also said that he should keep receiving communion.Biden told reporters that the issue of abortion...
Read more

The claim is among new allegations about the running of Skye's Home Farm during a fatal Covid outbreak.
Read more

Medicare should be able to negotiate drug prices —...

If my colleagues in Congress decide to put the health and well-being of the American people first before powerful interests, I am confident that we can succeed in lowering prescription drug costs for all families.
Read more

Lara Trump rebuts idea that her father-in-law plans to...

"I think that that is a lot of folks getting a little worked up about something," she said.
Read more

Witness: R. Kelly once compared himself to Jerry Lee...

A witness at the R. Kelly sex-trafficking trial says the R&B star once compared himself to rock legend Jerry Lee Lewis
Read more

President Biden said Thursday he's weighing a diplomatic boycott of the Winter Olympics in Beijing."It's something we are considering," Biden said in the Oval Office when asked by a reporter about the prospects of...
Read more

Prince Harry, Duke of Sussex, and his wife, Meghan Markle, Duchess of Sussex, are the latest to join the boom in sustainable investing as they follow Wall Street in embracing a multitrillion-dollar industry.
Read more

A strong cold front will be the focus of many weather hazards Wednesday and Thursday.
Read more

A 41-year-old woman whom authorities described as a "prolific retail thief," is facing numerous charges for allegedly stealing more than $40,000 worth of items from a Target in San Francisco, which has been plagued by brazen thieves pilfering convenience stor…
Read more

Tropical storm warning in effect as storm barrels toward...

Louisiana Gov. John Bel Edwards declared a state of emergency on Thursday ahead of a potential tropical cyclone that will likely hit his state and parts of Mississippi and Alabama on Friday.
Read more

With Andrew Desiderio, Kyle Cheney and Melanie Zanona. THE YOUNG AND THE CRUSTLESS: The &Pizza in Rayburn was swarmed on its first day open...
Read more