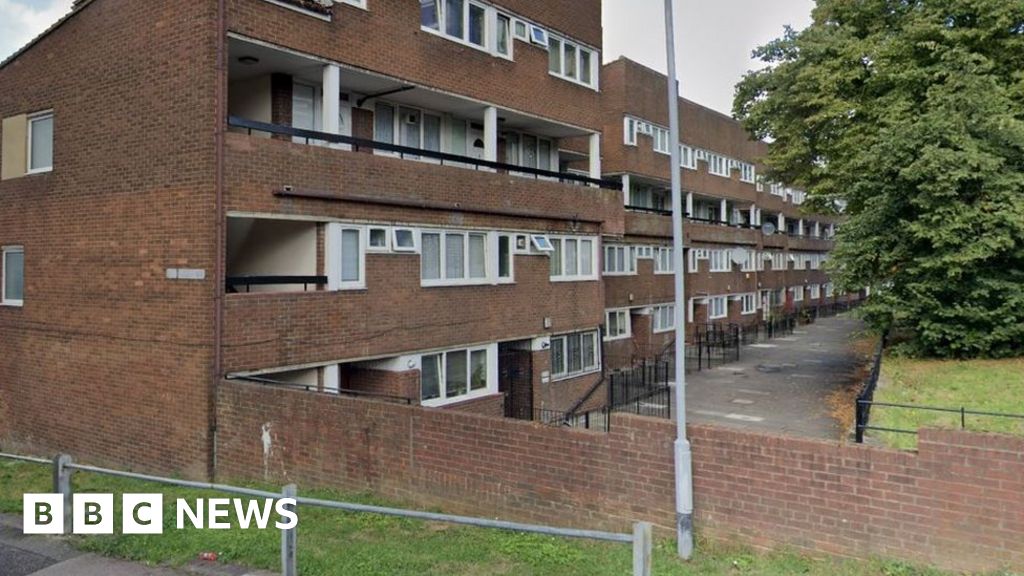 A further two members of the same family have died in hospital following a fire at a block of flats in south-east London.

A 14-year-old boy died from his injuries on Wednesday, while a 34-year-old woman died on Thursday, after the blaze on Russett Way, Greenwich.

A five-year-old boy died on Saturday. His cause of death was recorded as “inhalation of fire fumes”.

The fire is believed to have been started deliberately, police said.

Firefighters had rescued the woman and two children from the top floor of a block of maisonettes early on Saturday morning, with all three taken to hospital.

All three victims were members of the same family and their relatives have been informed and are being supported by specialist officers.

Detectives from the Metropolitan Police’s Specialist Crime Command believe the fire was started deliberately, but they are not looking for anybody else in relation to the investigation.

Det Ch Insp Laurence Smith said: “This was a truly awful incident and we are doing everything we can to support the family’s next of kin.

“We have been working alongside specialist investigators to establish the cause of the fire and it saddens me to say that we believe it was started deliberately, inside the address, by one of those inside.

“While I accept we may never know the circumstances, I am still very keen to hear from anybody who has information that could shed any light of this tragic incident.” CVS Health on Monday announced it will require COVID-19 vaccinations for all corporate employees and certain clinical workers who interact with patients.The two groups of employees must be fully vaccinated by Oct. 31, while pharmacists...
Read more

Poll: only half of frontline health workers have been...

Just over half of all frontline health workers in a new poll said they have received at l...
Read more

Felicia Sanders and Polly Sheppard spoke at the DNC about their experience surviving the Charleston, South Carolina church shooting. They said that shooters who take the lives of Americans are hateful, but that they choose to embrace love. They also endorsed …
Read more

Kelly leads in all potential head-to-heads of Arizona Senate...

Sen. Mark Kelly (D-Ariz.) is leading in head-to-head matchups with all of his potential Republican challengers in the Arizona Senate race, ...
Read more

David Muir: The 9/11 survivor story that stays with...

A United Nations panel says at least 18,000 Yemeni civilians have been killed or wounded by airstrikes since the country’s war escalated in 2015
Read more

USA's Simone Biles returns to competition with a strong performance in the beam final and wins bronze at the Tokyo Olympics.
Read more

There are no official details of the Xiaomi Mi 11 Ultra available at the moment, but leaked information gives us an idea of what the smartphone could be like.
Read more

Watch some of the best action as Serbia's Novak Djokovic advances into the semi-finals after beating Hungary's Marton Fucsovics in straight sets at Wimbledon.
Read more

Airbus ramps up production as it eyes post-Covid recovery

From Saigon to Kabul, leaving must not mean giving...

The U.S. must never abdicate or duck the responsibility to use its influence and the leverage it does have to advocate forcefully for prisoners of conscience and to press for human rights reform.
Read more

Celtic will face Danish runners-up Midtjylland in the second qualifying round of the Champions League.
Read more

Excited for the iPhone 13? Here are the five biggest changes we expect in the 2021 iPhones.
Read more

Walmart has the Apple Watch 3 on sale for...

Vovkovinskiy appeared on "The Dr. Oz Show" and got called out by President Barack Obama during a campaign rally in 2009.
Read more

Plus: A failed takedown in Russia, details on an FBI-sting encrypted phone, and more of the week's top security news.
Read more

As North Korea goes back to its pattern of pressuring South Korea to get what it wants from the United States, the powerful sister of leader Kim Jong Un has emerged as the face of its campaign of mixing weapons demonstrations and peace offers
Read more

11 killed by roadside bomb in Afghanistan

A roadside bomb explosion in Afghanistan has left 11 people dead, including three children, The Associated Press reported on Sunday.Badghis provincial Gov. Hesamuddin Shams told the AP that a minivan fell into a valley after the explosion...
Read more

HSBC Holdings Plc is giving some of its French staff two options to work from home part-time, joining peers in adapting its working week after the Covid-19 pandemic.
Read more

Totally Rated: was Black Widow worth the wait?

Totally Rated Season 2 continues with a look at Marvel's Black Widow, and updates for The Witcher 3 and God of War: Ragnarok
Read more

People across the continental U.S. will soon witness a rare and spectacular celestial event: a total solar eclipse. In this preview of her report for "Sunday Morning" airing August 13, correspondent Martha Teichner finds out how the demand for eclipse-safe vi…
Read more

Israel launched a series of heavy airstrikes early Monday at several locations of Gaza City as the conflict moved into its second week.
Read more

A founder of a nonprofit has launched a 2022 primary bid to replace Rep. Ron Kind (D) in Wisconsin.Rebecca Cooke, a Democrat, announced her candidacy on Wednesday, framing her announcement around...
Read more

Infrastructure timeline: What Congress will do next

A bipartisan deal is clinched, but the marathon of negotiations over how to move not one but two infrastructure packages through Congress is just getting underway, testing Democratic unity, President Joe Biden's leadership and Republicans' resolve.
Read more

Richard Osman: Trying to make the world a better...

Taxpayers and patients cannot afford to pay a high price for a treatment not known to be effective.
Read more

The White House is mounting an all-out effort to sell the bipartisan infrastructure deal President Biden and a group of senators agreed to last week, deploying top administration officials to states and engaging lawmakers...
Read more

Businesses and colleges should consider requiring people to get vaccinated against Covid-19 in light of the surge of U.S. cases driven by the delta variant, Anthony Fauci said Friday.
Read more

Dogs rehomed: ‘She went from a defeated dog, to...

For dogs like June, a new home is a lifesaver - but more animals may need new homes post-lockdown.
Read more

Indoor-Grown Weed Is Spewing Carbon Into the Atmosphere

Most legal marijuana is grown in a controlled environment. A study just quantified how much damage that's doing to the planet.
Read more

A group of more than 150 professors from Stanford University signed an open letter to U.S. Attorney General Merrick Garland last week asking that he get rid of the Department of Justice's (DOJ) "China Initiative" which wa...
Read more

COVID-19 deaths in the U.S. are forecasted to decrease in the upcoming weeks even as some predict a rise in cases associated with more contagious variants.Data from the University of Massachusett...
Read more

Canada is set to ban flights from Pakistan and India for a 30-day period, citing concerns about coronavirus variants from the nations entering the country.Canadian Transport Minister Omar Alghabra announced during...
Read more

Israel’s Prime Minister Naftali Bennet on Sunday warned about the outcome of Iran’s presidential election and said it is further proof that Tehran cannot be allowed to get a hold of nuclear weapons.
Read more

Xi Must Judge Evergrande’s Risk to His Party

“Hopefully our craft beer can be that spark for more people to come visit.” The 2011 Fukushima earthquake and tsunami hit Kesennuma hard. Black Tide Brewing hopes to promote "Made in Kesennuma" to revive the port city in Japan #10yearslater #防災いまできること #あれから1…
Read more

North Las Vegas Mayor John Lee (R) is running for governor in Nevada.Lee, who was first elected mayor in 2013, announced his candidacy in a video on Monday.In it, the two-term...
Read more

Prince Harry and Prince William's relationship was shattered by an internal palace war sparked by Meghan Markle and a Texas-born royal aide, according to biographer Robert Lacey.
Read more

Woman shot nail salon owner because she was unhappy...

Welcome to Friday, Americas. Here’s the latest news and analysis from Bloomberg Economics to help you start the day:
Read more

Royal family missing the star power of Harry and...

Since Prince Harry and Meghan Markle quit as full-time royals, their popularity in the U.K. has plummeted – and Prince William and Kate Middleton have been called upon to fill the vacuum.
Read more

LeBron James and the Los Angeles Lakers were eliminated by the Phoenix Suns in the first round of the NBA playoffs last month. Now, the four-time NBA MVP is spending time at his son’s prep basketball games, where he caused a scene during a game on Saturday.
Read more

The St Andrews University friends all received their first dose in England and their second in Scotland.
Read more

Southwest to Comply With Biden Vaccine Order Over Abbott...

Covid: Clean-up after crowds gather in Cardiff Bay despite...

People who broke Covid rules to gather should be "deeply ashamed of themselves", says council leader.
Read more

Trader gets painted stones instead of $36m of copper

The company says it took delivery of six thousand tonnes of spray-painted rocks instead of the metal.
Read more

Chelsea Handler and boyfriend Jo Koy are all loved...

Chelsea Handler and Jo Koy packed on the PDA during a recent walk around Manhattan's downtown area. The two have recently begun dating.
Read more

Is a departure best for both parties this summer or does long-serving captain Scott Brown still have a part to play in Celtic's future?
Read more

Henri expected to strengthen and head for Northeast

Officials in Massachusetts, Connecticut and New York cautioned that people could lose power for a week or even longer.
Read more

What to Expect From Apple’s Next iPhones, AirPods, Macs...

This week: The next slate of iPhones and other devices are near, Apple turns AppleCare+ for Mac into a subscription service, the company races to temper the outcry over its new iCloud Photos features, and key Apple teams lose engineers.
Read more

‘My heart goes out,’ Biden says on Colorado shooting,...

For the second time in a week, a mass shooting has overshadowed President Joe Biden's COVID relief tour.
Read more

Two crises in the Caribbean are emerging as a difficult test for Florida Democrats ahead of the 2022 elections.For the slate of Democratic candidates hoping to oust Gov. Ron DeSantis (R) and Sen....
Read more

Borrowing shrinks, but was still the second-highest on record for August as Covid support continues.
Read more

Bucs’ Tom Brady was very ‘close’ to signing with...

Tom Brady’s blunt assessment of the mystery team that passed up on the chance to sign him during free agency last year has one NFL insider pointing the finger at the New Orleans Saints.
Read more

El Chapo’s alleged top money launderer has been extradited to the U.S. from Mexico in connection with an investigation into the Sinaloa Cartel’s finances and drug trafficking, according to the Department of Justice.
Read more

Tesla Inc (TSLA.O) will deliver a high-performance version of its Model S on Thursday, aiming to reignite interest in the nearly decade-old sedan and fend off rivals such as Porsche, Mercedes-Benz and Lucid Motors in the luxury electric vehicle market.
Read more