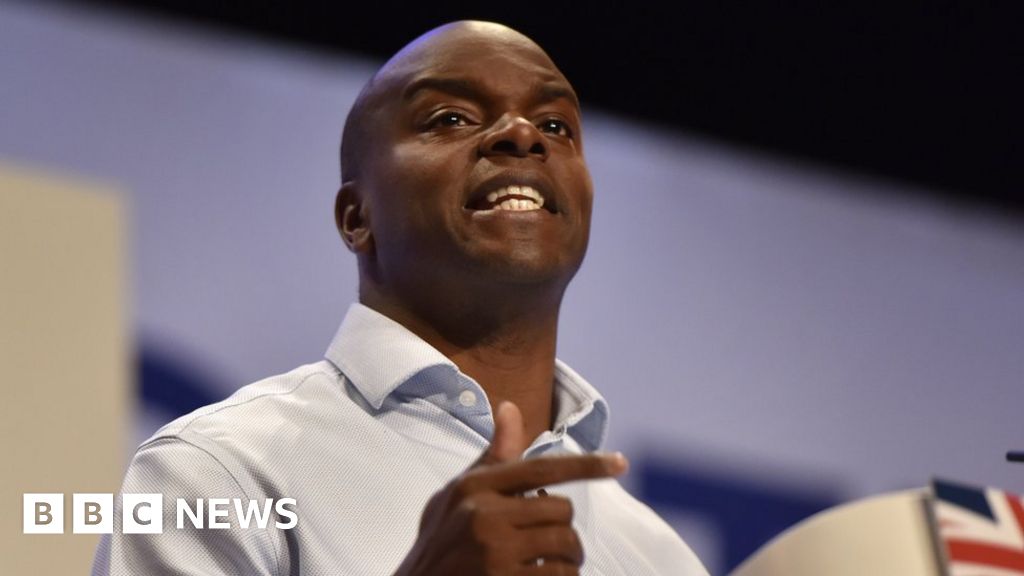 image captionMr Bailey said there are “no-go” areas of London

London mayoral candidate Shaun Bailey has outlined plans to “put pressure on criminals rather than communities” if he were to be elected.

Mr Bailey, a member of the Greater London Authority (GLA) Conservatives, claimed a “crime epidemic” meant there are current “no-go” areas in the city.

The Conservative mayoral candidate was asked during a campaign event, which was held online, how women should alter their behaviour to be safe on the streets.

The question related to the disappearance of Sarah Everard last week as she walked home from Clapham to Brixton.

Mr Bailey said: “What women really need is a safe London, a London where police are around to support them. The streets of London need to be made safe.

“We can’t have parts of London that are no-go for women or anybody else. So, the first step is to make sure we get police on the ground to make the area safer, so women don’t have to do anything different.”

On Wednesday, it was announced that a serving Metropolitan Police officer had been arrested on suspicion of murder in relation to Ms Everard’s disappearance.

image captionJasna Badzak, whose son Sven was stabbed to death, spoke in favour of Mr Bailey

Jasna Badzak, whose son Sven was stabbed to death in Kilburn in February, also spoke at the event.

“We are at the point where one murder each weekend is a good weekend – and we don’t have many of those. Sadiq Khan cannot keep us safe,” she said. “It sounds harsh but it is not as harsh as the sound of family members crying”.

He said “long-term savings in City Hall’s budget” would help fund his scheme for more police.

However, Nick Thomas-Symonds, the shadow home secretary, said Mr Bailey “simply cannot be trusted to keep Londoners safe” and had “stayed silent while the Tory government continues its cuts to our vital public services”.

He added: “The election… is a two-horse race between Sadiq Khan, who is standing up for London, and the Tory candidate who simply doesn’t share London’s values.”

The London mayoral and London Assembly elections take place on 6 May. Scotland 2-1 Hungary: Scots can be ‘best in world’ for spirit after late win

China Steps Up Efforts to Ring-Fence Evergrande, Not to...

As China Evergrande Group edges closer to a massive restructuring, Beijing has stepped up efforts to limit the fallout, signaling it’s willing to prop up healthy developers, homeowners and the real estate market at the expense of global bondholders. In the la…
Read more

"They're trying to whitewash history," Rep. Seth Moulton said of Republicans who pushed the conspiracy theory. "They need to go."
Read more

The fight reportedly began after someone cut the line to enter an attraction—soon enough, several guests and park employees were involved in the violent outbreak.
Read more

Merkel Under Pressure to Speed Up Vaccinations as Curbs...

Chancellor Angela Merkel’s government faces pressure to lay out a path toward more normality after a controversial lockdown law went into effect over the weekend, triggering curfews and tougher restrictions across most of Germany.
Read more

Bayer AG faced probing questions from a judge over its plan to pay as much as $2 billion to resolve future lawsuits over claims that its Roundup weedkiller causes cancer.Bayer and lawyers representing consumers presented the deal Wednesday to U.S. District Ju…
Read more

COVID-19 cases in US could surge during ‘dangerous’ fall,...

A top official at the World Health Organization said Thursday that COVID-19 mutations will likely lead to a surge in cases this fall, prompting the U.S. to bring back health guidelines.
Read more

A small group of Turkish protestors has gathered outside the American consulate in Istanbul to protest U_S_ President Joe Biden’s decision to call the mass deportations and killings of Armenians a century ago a “genocide.”
Read more

The Inside Story of the Biden-Harris Debate Blowup

President Joe Biden and Vice President Kamala Harris have appeared so in lockstep that it’s hard to remember how tense their early campaign days were.
Read more

Leicester, West Ham, Rangers and Celtic discover who they will face in the 2021-22 Europa League group stage.
Read more

If this information is accurate, the S22 models will have the same or smaller battery capacities as their S21 equivalents.
Read more

A leaker suggests Samsung's upcoming foldables will be quite a lot cheaper than their predecessors.
Read more

James Abate on the Markets (Radio)

A small jet crashed into a Tennessee lake on Saturday.
Read more

The House GOP leader also denied being made aware of any red flags about Gaetz in the past.
Read more

Suit to Abolish Libor Will Stay Put in San...

A judge refused to move a lawsuit seeking to terminate Libor from San Francisco federal court to New York, rejecting an argument by big banks that the case belongs in Manhattan due to the decades of litigation there over the benchmark and court decisions it h…
Read more

ER Doctor Overwhelmed by COVID Patients Fears ‘We Are...

Lance VanGundy, ER director at UnityPoint Health in Marshalltown, Iowa, told Newsweek that sceptics need to put their politics aside and get the shot.
Read more

The actor, 34, is carried off a golf course after collapsing during a celebrity match in the US.
Read more

Judge sets bail for some in sex abuse case...

Inflation is rising at its fastest rate since 2008. That's causing pain for everyone from young workers to seniors.
Read more

Sanders sees battle for America’s soul playing out in...

“This really is a test of whether or not American democracy can work,” the Vermont senator said.
Read more

County Championship: Kent replace side against Sussex after Covid-19...

Kent are forced to name an entirely new team for their County Championship match against Sussex after a player tests positive for Covid-19.
Read more

His Royal Highness Prince Philip, Duke of Edinburgh, lived most of his life in the public eye.
Read more

The panel continued to broaden its probe into who is responsible for the deadly attack on the Capitol.
Read more

The government cannot say how many infections are being prevented by sending pupils home.
Read more

Twitch Streamers Rake in Millions With a Shady Crypto...

The company says it is “closely monitoring gambling content” but legal experts told WIRED that some promotions may be illegal.
Read more

There is "still hesitancy" to have the Covid vaccine, Race Council Cymru's chairman says.
Read more

Proms season draws to a close with a tango

Identification requirements are preventing some people in high-risk groups from getting vaccinated against COVID-19 in the U.S. This includes undocumented immigrants, people experiencing homelessness and older Americans. Kat Clavin, the co-founder and CEO of …
Read more

America’s Afghan war is over but the battle for...

America's chaotic, humiliating -- yet, at times, heroic -- final retreat from its defeat in Afghanistan will resonate for years after the last military jet lifted off from Kabul at 11:59 p.m. local time on Monday, ending the country's longest war.
Read more

No, Covid-19 Vaccines Won’t Make You Magnetic. Here’s Why

No matter how many videos you’ve seen of people sticking spoons to their faces, that’s just not how magnets work.
Read more

Former Florida congressman Mark Foley was spotted sitting behind Donald Trump at his Florida rally on Wednesday. Foley resigned from his position in 2006 amid allegations that he had sent sexual messages to teenage boys.
Read more

Israel on Friday lowered to 50 from 60 the minimum age of eligibility for a COVID-19 vaccine booster shot and will also offer them to health workers, hoping to stem a surge in Delta variant infections.
Read more

Three men are arrested in connection with the death of the 31-year-old in Bury, Greater Manchester.
Read more

How Reddit turned its millions of users into a...

Torrential downpours in Italy brought on by flash flooding and landslides in the Lake Como area have damaged roads, vehicles and structures.
Read more

The government wants to lift the limit on how many deliveries a lorry driver from abroad can make in the UK.
Read more

Beats Studio Buds get sized up in new regulatory...

Apple's still-unannounced Beats Studio Buds have been photographed and detailed yet again – this time for Taiwan's NCC.
Read more

There are concerns about non-essential cross-border travel, with restrictions about to ease in Ireland.
Read more

Port was given a life sentence for the murders of four men in London who he met on dating apps, and an inquest into how police handled the case is now underway.
Read more

Biden says he and GOP both ‘sincere about’ seeking...

President Biden said Thursday that both he and congressional Republicans are making "a genuine effort" to compromise on infrastructure.Biden huddled in the Oval Office with Sen. Shelley Moore Capito (R-W.Va.) and a...
Read more

The Papers: ‘Push to scrap free Covid tests’, and...

Taiwan will continue to play its role as a member of the international community and ensure regional peace and stability, President Tsai Ing-wen told a visiting delegation of French senators on Thursday amid escalating tensions with China.
Read more

Wendy Williams under fire for saying ‘death to’ Britney...

Wendy Williams is under fire for wishing death upon Britney Spears' parents in a clip from her show that has since been edited out.
Read more

Brentford: Thomas Frank says his side will ‘attack the...

Brentford boss Thomas Frank says his side will not change the attacking style that got them promoted to the Premier League.
Read more

A group of Senate Republicans plans to present their latest offer to the White House on a major new infrastructure package on Thursday, with one member saying it will weigh in at almost $1 trillion.
Read more

Spyware toolkit used by governments, hackers to break into...

This Workout Mirror Is a More Affordable Pick for...

China launches crew for six-month mission aboard its space...

The mission aims to set a new record for the length of time spent in space by Chinese astronauts.
Read more

Meteorologist Jeff Berardelli from CBS affiliate WPEC in West Palm Beach, Florida joins CBSN to give the forecast for more record-breaking temperatures in the Southwest and as people along the Louisiana and Texas coasts prepare for heavy rain and flooding fr…
Read more

There may be more common ground among Supreme Court liberals and conservatives than many people think.
Read more

The Ghost of Empires Past

Like Spain of old, America is overextended, committed to goals it lacks the power and money to achieve. The post The Ghost of Empires Past  appeared first on The American Conservative.
Read more

How The Ultra-Wealthy Are Investing (Podcast)