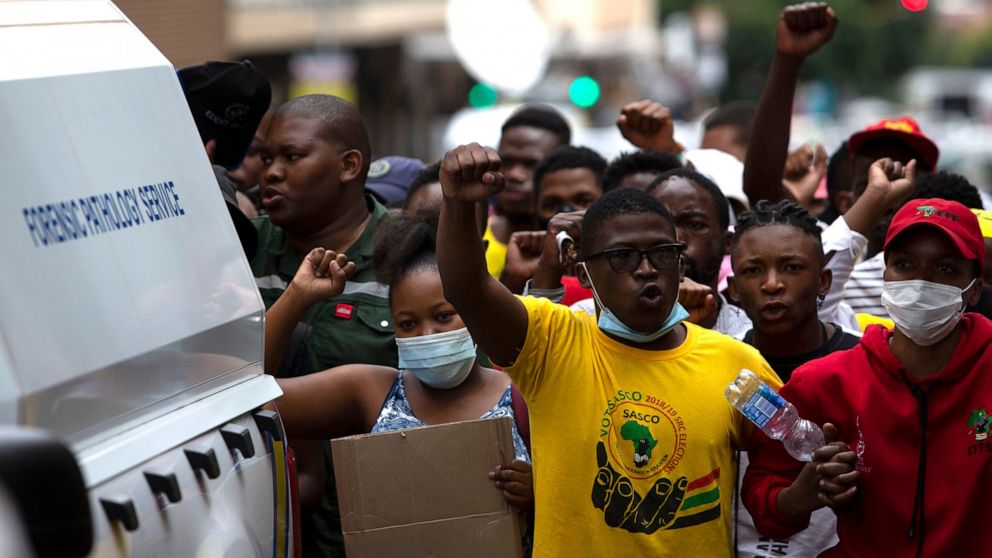 JOHANNESBURG — In an effort to quell violent protests at universities, South Africa’s education minister has vowed to make more money available to enable thousands of students to register for the 2021 academic year.

One man, a bystander, was killed in the protests Wednesday at Johannesburg’s University of the Witwatersrand, adding pressure on the government to resolve the problem.

Education Minister Blade Nzimanede said Thursday that the education budget will reallocate funds to ensure that all qualifying students are allowed to register for their studies.

The government pledge comes after Mthokozisi Ntumba, 35, was allegedly shot and killed by the police when they opened fire on protesting students. Ntumba was apparently returning from a clinic in the area when he was caught in the crossfire, according to reports in the local media.

There is widespread outrage over the shooting death of Ntumba, who had recently obtained his masters degree and was the breadwinner for his wife and three children.

It seems there was overreach by the police. This matter must be investigated and those responsible must be dealt with according to the law, Ramaphosa told parliament.

Amnesty International has called for South Africa’s police to stop using rubber bullets, which the rights group said are also deadly and can cause long-term injuries.

Police minister Bheki Cele on Thursday visited Ntumbas family and promised action against the police officials who were responsible for his death.

It is something that has no inch, no grain of explanation or defence on it. Somebody, for me, just went crazy, Cele told the press outside Ntumbas home.

Police investigators on Thursday confirmed they had gathered evidence from the scene to investigate Ntumbas killing and determine whether police were responsible for his death.

It is unclear how far the recent announcement about funds being made available to allow students to register can quell the spread of further demonstrations. Students from the University of Cape Town are expected to protest on Friday. The University of the Free State has confirmed that at least 20 students were arrested Thursday after clashes with the police outside its campus. Back in power, Israel’s Left finds its influence is limited

Uber makes its first step into the cannabis market

Spurs boss Nuno Espirito Santo praises Harry Kane who returned to their squad for 1-0 win at Wolves as speculation over his future at the club continues.
Read more

A summer like no other: Schools aim to help...

Educators say they are especially concerned about students living in poverty, English-language learners and students with disabilities.
Read more

Step by step — and note by note — London's many musicians are getting back to work and preparing to perform new music under new public guidelines. The return of live music in the city that produced bands from the Rolling Stones to the Spice Girls is reigniti…
Read more

Ramos considering approaches from Man City, PSG and Bayern Munich, Tottenham do not have option to re-sign Bale, Roma close to signing Patricio from Wolves, plus more.
Read more

Germany expects vaccine deliveries to ramp up in 2nd...

The alleged hitman in "Tiger King" was arrested Wednesday night on suspicion of DUI, driving with a suspended license, and having alcohol with a broken seal in his car.
Read more

Church of England ‘regret’ over suicide of falsely accused...

The church admits "unreasonable pressures" were put on Fr Alan Griffin before he killed himself.
Read more

Spinner Shahbaz Ahmed takes three wickets in an over to inspire a dramatic six-run win for Royal Challengers Bangalore against Sunrisers Hyderabad in the Indian Premier League.
Read more

A divided U.N. Security Council is pressing the Taliban to live up to pledges to let people leave Afghanistan after the U.S. withdraws its forces
Read more

A union representing teachers in New York on Monday came out against the state's vaccine mandate for public workers, saying while it does encourage teachers to get vaccinated, it will not support a requirement."We...
Read more

The White House has returned the prisoner-of-war/missing-in-action (POW/MIA) flag to its previous position atop the White House residence, after it was moved to a different location on the White House grounds during the T...
Read more

Breyer Says He Hasn’t Decided When to Retire From...

Justice Stephen Breyer told CNN he hasn’t decided when he will retire from the Supreme Court, a stance certain to disappoint liberals who have been calling for the 82-year-old to step down and let President Joe Biden fill the vacancy.
Read more

Aston Villa boss Dean Smith praises a "confident" Jack Grealish during his side's 2-1 win over Spurs and says Ollie Watkins is the "best pressing centre-forward in the league".
Read more

TechRadar sits down with Dune director Denis Villeneuve to discuss the huge task of making a movie that lives up to the source material.
Read more

Brazil Lashes Out on Climate Funds But Sees Carbon...

Ryan Murphy Says He Lost Backstroke Gold to ‘Not...

"It is a huge mental drain on me to go throughout the year that I'm swimming in a race that's probably not clean," said Murphy, the defending Olympic champion.
Read more

Democratic Wisconsin Gov. Tony Evers says it is “outrageous” that Republicans plan to spend $680,000 on an investigation into the 2020 election in the state
Read more

A woman who claims she bought the winning California Lottery ticket says she put it in the laundry.
Read more

Over 230K people displaced due to conflict in Myanmar:...

The United Nations said over 230,000 people have been displaced due to the ongoing conflict in Myanmar, ...
Read more

California Gov. Gavin Newsom (D) on Wednesday signed legislation aimed at combating Amazon warehouse speed quotas by protecting employees who are unable to meet quotas due to constraints on not being able to take a ...
Read more

A decision to move some results down followed careful consideration, the university says.
Read more

Hathras rape case: Prisoners in their own home, lives...

The BBC revisits the family of a 19-year-old who died in India last year after reporting gang rape.
Read more

Dollar retreats from highs as focus turns to payrolls...

The dollar eased from last week's peaks on Monday as encouraging trial results for a COVID-19 pill supported risk appetite, but investors remained cautious ahead of central bank meetings in Australia and New Zealand as well as U.S. labour data this week.
Read more

Sleet and snow halt Glamorgan's progress against Yorkshire, with the visitors leading by 298 runs going into the final day.
Read more

Software supplier Kaseya was targeted by hackers in a ransomware attack. At least eight companies have been compromised. CBSN's Lana Zak has more.
Read more

A major redevelopment is expected to start in September 2022, with plans to re-open the theatre in 2024.
Read more

South Korean president: Trump ‘beat around the bush’ on...

It's only available now under emergency use.
Read more

Krystsina Tsimanouskaya feared for her safety after criticizing her coaches on social media. The riff has drawn more attention to Belarus' uncompromising authoritarian government.
Read more

The Department of Justice has arrested four more members of the Oath Keepers in connection with the Jan. 6 attack on the Capitol, adding them to a growing group of far right militia members facing serious felony cha...
Read more

Austria’s Kurz May Step Down as Chancellor, APA Reports

Welsh Election: NHS pay – what the parties are...

What are the political parties in Wales offering health workers at next week's Senedd election?
Read more

Coronavirus: More than one million people in NI have...

About 70% of NI adults have had two doses but just 56% of under 30s have come forward, officials say.
Read more

‘No Sweets’: For Syrian refugees in Lebanon, a tough...

President Trump's Twitter followers are puzzled after he tweeted: "Despite the constant negative press covfefe." He later deleted the tweet. The president is dealing with increased pressure as his son-in-law and senior adviser, Jared Kushner, is now part of t…
Read more

The pieces were created in reaction to a spate of homophobic attacks in Liverpool city centre.
Read more

Blinken says of Afghanistan drawdown: ‘The terrorism threat has...

He said: "We achieved the objectives that we set out to achieve."
Read more

Alex Neil: Preston part company with manager after one...

West Ham United's Under-21 side have been docked three points in the EFL Trophy for playing a suspended player.
Read more

The deal comes as the cash-strapped firm faces another interest payment deadline on Wednesday.
Read more

Spain suffer their first World Cup qualifying defeat since 1993 as Sweden come from behind to end a 66-game run.
Read more

Milley: Calls to China were ‘perfectly’ within scope of...

The Joint Chiefs chair has been at the center of a firestorm amid reports of the calls he made.
Read more

New Call of Duty may release on last-gen –...

Call of Duty 2021 could be split into two versions across current and last generation consoles, according to a known leaker.
Read more

How to watch Tudum online: date, start time, and...

It comes as Hong Kong has banned the vigil for the second year running, citing virus restrictions.
Read more

Hurricane Larry hits Category 3 in Atlantic, may cause...

Hurricane Larry, far out in the Atlantic Ocean, strengthened to Category 3 on Friday night as the busy 2021 Atlantic hurricane season continued.
Read more

The change could allow thousands of people whose relatives died early in the pandemic, before reliable testing was commonplace, to access the funeral aid program
Read more

Singapore may need as much as six months to get to a "new normal" in terms of easing restrictions and people resuming their previous routines in the COVID-19 pandemic, Prime Minister Lee Hsien Loong said on Saturday.
Read more

The Department of Labor is investigating Google for gender pay discrimination. The government says Google was randomly selected for an audit, but that the tech giant has refused to hand over pay data despite repeated requests. Paula Reid reports.
Read more

Putin says Biden did not invite him to White...

President Biden did not extend an invitation for Russian President Vladimir Putin to visit the White House during their summit on Wednesday, Putin said at a news conference.The Russian president ...
Read more

Surfshark’s new tool will delete any data third-parties might...

President Biden sells his “Build Back Better” plan in...

President Biden is trying to shift the focus away from the price tag for his domestic agenda and on to what the bills actually seek to do for the American people. Speaking at a trade union training facility in Howell, Mr. Biden said that to oppose the investm…
Read more

How to watch The Batman’s new trailer today

Here's how to watch the new trailer for The Batman as part of today's DC FanDome 2021 event.
Read more

Police Scotland says it is investigating after seven complaints in relation to donations to the SNP.
Read more

Trump’s White House was somehow even more vulnerable than...

Tom Barrack charges suggests Trump's White House was even more vulnerable than we thought — and that's saying something, given Manafort, Cohen, Bannon and Flynn
Read more

The Jazz were leaving Salt Lake City to travel to Memphis.
Read more

Fewer than a dozen Republicans are expected to back the Senate-passed bill. But that number may go much higher in the coming days, depending on circumstances.
Read more