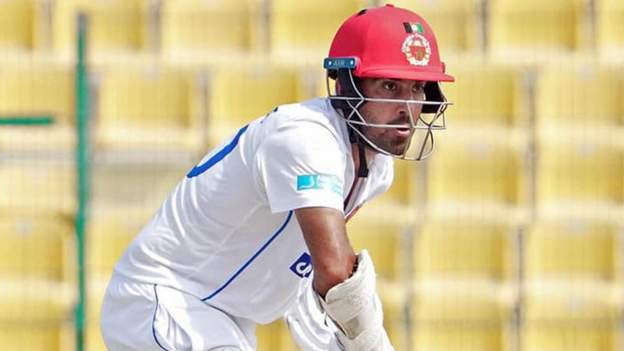 Hashmatullah Shahidi became the first Afghanistan player to score a Test double century on day two of the second Test against Zimbabwe in Abu Dhabi.

Shahidi was not out on 200 as Afghanistan declared on 545-4, their highest total in Test cricket.

In reply, Zimbabwe posted 50-0 in their first innings.

In a record-breaking day for Afghanistan, Shahidi and Afghan shared a 307-run fourth-wicket stand – Afghanistan’s highest partnership in Test cricket.

The duo join Rahmat Shah as the three players to score a Test century for Afghanistan.

Afghan’s innings – which came off 257 balls, including 14 fours and two sixes – came to an end when he was out lbw to spinner Sikandar Raza.

At the time, his knock was his side’s highest individual Test score before he was surpassed by Shahidi.

Afghanistan – who lost the first game of the two-match series by 10 wickets – are playing in their sixth ever Test since being awarded a full member status in 2017.

They lost their debut Test to India the following year, before registering consecutive wins against Ireland and Bangladesh and losing to West Indies in 2019. ‘My god what an idiot’: J.D. Vance gets whacked for past Trump comments

Mike Pence and Mitch McConnell have a Donald Trump...

Nevada brings back mask mandate in line with new...

Georgia Companies Say Voting Law Could Have Been a...

Corporations that had declined to publicly oppose a sweeping Georgia election law claimed some responsibility for pushing to remove some of the most egregious elements from the measure, which critics have said will make it more difficult for people to vote.
Read more

Death toll climbs to over 180 in European flooding

The death toll in Germany and other areas of Europe due to severe flooding climbed to more than 180 on Sunday, with German Chancellor Angela Merkel suggesting the intensity of flooding had ...
Read more

Faced with mandates amid a Covid-19 resurgence, some Americans are making far too much of a simple choice.
Read more

Falwell’s son out as VP at Liberty University

The move is a sign that the evangelical university is trying to distance itself from its former leader, even as he hints at a comeback.
Read more

The Amazon Eero 6 is an affordable and easy-to-use mesh networking system with support for Wi-Fi 6.
Read more

Alcatraz, the historic island prison off San Francisco, has opened up for a limited number of indoor tours
Read more

Presented by Facebook THE BUZZ FIRED UP: Mother Nature could be Gavin Newsoms biggest recall problem. Which is why the California governor took to...
Read more

David Beater worked in churches for 25 years despite a conviction for sexually assaulting a child.
Read more

A Salvadoran woman who had served nearly a third of her 30-year prison sentence on charges of terminating her pregnancy and violating El Salvador's harsh abortion ban was released on Monday, activists said.
Read more

In July 2002 designer Ralph Rucci was the first American in over 60 years to be invited to show his own couture collection in Paris. In a report that aired on "Sunday Morning" October 27, 2002, Rucci talked with correspondent Martha Teichner about his inspira…
Read more

Many of the party's House members want a better plan than a Senate game of chicken. They might not get one.
Read more

Australian Leaders to Meet on Vaccine Plan to Speed...

Nvidia and Pentanet have teamed up to bring cloud gaming service GeForce Now to Australia in October.
Read more

00:00Give us your take on what happened it was rather historic but Inote that neither party really got more than about 26 percent. ...
Read more

Three men are arrested in connection with the death of the 31-year-old in Bury, Greater Manchester.
Read more

ExxonMobil’s climate pitch to Biden: A $100B carbon project...

The oil and gas giant is pushing its carbon capture and sequestration technology to drive the type of speedy emissions reduction the White House is expected to announce this week.
Read more

Real Madrid score twice in the last four minutes to hit back against Valencia and go top of La Liga.
Read more

California Gov. Jerry Brown provided an update on the dangerous wildfires threatening Southern California on Saturday. Brown said climate change played a role in the fire's' intensity, and urged residents near affected areas to enable phone alerts so they can…
Read more

The World Bank and the African Union said on Monday they would work together to accelerate COVID-19 vaccinations for up to 400 million people across Africa, bolstering efforts to vaccinate 60% of the continent's population by 2022.
Read more

Germany will face England in the last 16 of Euro 2020 after twice coming from behind to knock battling Hungary out of the tournament.
Read more

Former Louisiana Gov. Edwin Edwards (D), who was the state's top chief executive for four terms before serving nearly nine years in prison for federal corruption charges, died on Monday at his home. He was 93....
Read more

New Celtic loan signing Filipe Jota will not think of a permanent move until the end of the season as Hearts say they beat Hibs to Barrie McKay's signature.
Read more

Chubb Ltd., the global insurer led by Evan Greenberg, is exploring an acquisition of Hartford Financial Services Group Inc. in what could be one of the industry’s biggest deals in years, people familiar with the matter said.
Read more

As Good As It Gaetz

The biggest scandal yet of the post-Trump landscape reveals a country already boring of Biden. The post As Good As It Gaetz appeared first on The American Conservative.
Read more

Swedens Prime Minister Stefan Lofven shocked the political establishment on Sunday by announcing he will end his seven-year term in November, as well...
Read more

KHOU reporter Brandi Smith was on scene as a truck was overcome with rising floodwater and the driver was rescued by authorities. She joined CBSN to describe the moment.
Read more

As the nominees gear up for the second presidential debate amid a week of scandal, "Face the Nation" brings you the latest from the campaign trail with Trump supporter and former New York City Mayor Rudy Giuliani, Clinton campaign manager Robby Mook, CBS News…
Read more

Founder and CEO Carl Pei took to Twitter to share that the Nothing Ear 1 wireless earphones will not release this June due to a delay.
Read more

NHS Covid thanksgiving service: ‘They did what they could...

A doctor, a patient and a volunteer reflect on Covid-19, as a thanksgiving service is held at St Pauls.
Read more

Jamie Spears filed papers in an LA court to formally end the 13-year arrangement with the singer.
Read more

Kim Jong Un vows to be ready for ‘dialogue...

The U.S. recovery from the latest Covid-19 wave is taking hold across the country, with cases dropping or poised to start falling in the vast majority of states.
Read more

David Gomoh died because he had the misfortune to live in an area frequented by gangs, a jury hears.
Read more

Mozilla's all-new Firefox features a simpler and cleaner design to help users stay productive and focus on the task at hand.
Read more

Tesla Model S Plaid Specs, Price and Where to...

At the reveal event, CEO Elon Musk said Tesla has "really taken it to a whole new level with Plaid."
Read more

On The Money: Key takeaways from May jobs report...

Happy Friday and welcome back to On The Money, where we cannot advise spending ...
Read more

In this week's episode of "The Takeout" podcast, host and CBS News chief Washington correspondent Major Garrett spoke with the author of "How to be an Anti-Racist."
Read more

I’m hell-bent on buying this standing desk on Black...

Standing desks can be pricey, but the health benefits are well documented, so now I just need to find a bargain.
Read more

Twenty riders were trapped Saturday on a rollercoaster that stopped in the middle of a ride at the Six Flags Fiesta Texas theme park in San Antonio.
Read more

One person was killed and five others injured during a shooting that took place at a vigil for a shooting victim on Saturday in Columbus, Ohio....
Read more

New Cybersecurity Regulations for Pipelines Set to Be Released

The Biden administration is poised to issue new regulations for pipeline operators in the aftermath of the April hack that temporarily paralyzed the nation’s biggest fuel conduit, according to three people familiar with the matter.
Read more

COVID-19 vaccination rates appear to have plateaued again in the U.S. Many communities have created incentive programs offering money, free food, beer and other perks to get more shots in arms, but does that really help? Harsha Thirumurthy, associate director…
Read more

Covid: Lorry drivers arriving in England to be tested

Hauliers travelling from outside the UK will need to take a Covid test from 6 April.
Read more

For the survivors and witnesses of mass shootings and other forms of gun violence, longtime comforts and celebrations, like fireworks, have become nightmarish triggers.
Read more

An unobstructed view of window washers

Being gay in Ghana: LGBT community is ‘under attack’

Since the country’s first LGBT safe space was closed down by police, queer Ghanaians are "not safe".
Read more

Euro 2020: Italy go all out for squad announcement

President Biden’s prediction that all U.S. troops will be out of Afghanistan by next year is being met with some skepticism. Past predictions and vows, including from Biden himself, of an end date for America’s longest war have come and gone with...
Read more

Taiwan's foreign minister says China is seeking political gains abroad in return for providing coronavirus vaccines, partly to increase pressure on Taiwan, which it claims as its own territory
Read more

San Francisco could potentially break its record for drug-related deaths, one year after it recorded its deadliest year for overdoses....
Read more

Reds notch their first win of the season after...

With the Reds up 7-2 in the 4th inning, tempers flared and both dugouts and bullpens emptied after Nick Castellanos scored on a wild pitch.
Read more

So far, Earth is having the second-hottest year on...

Mass drug overdose kills as many as four people...

There has been a massive drug overdose in central Georgia, with at least two dozen cases over the past 48 hours and reports still coming in. It is the latest alarming example of the overdose epidemic in the U.S. Mark Strassmann reports.
Read more