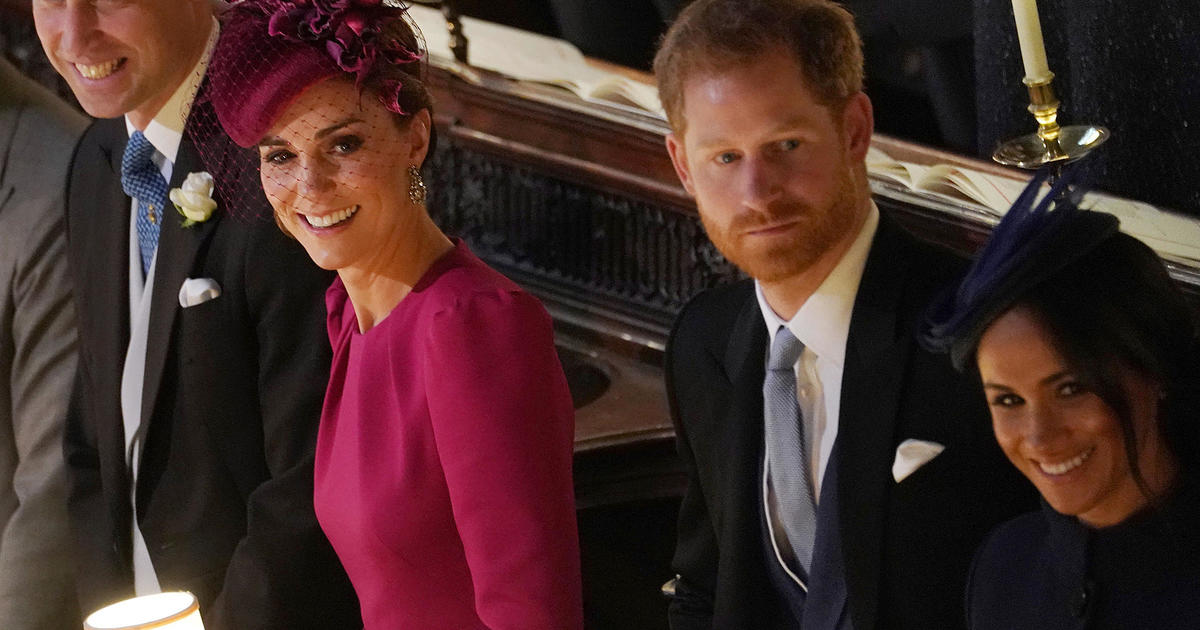 London — Prince William on Thursday became the first British royal to directly defend his family against accusations of racism made by his sister-in-law Meghan, Duchess of Sussex, and her husband Prince Harry in their interview with Oprah Winfrey. William told journalists that the royals are “very much not a racist family.”

Commenting during a visit to a school in east London, Prince William added that he had not spoken to his brother Harry since the interview, but said he would.

Please check back as this story will be updated. Covid-19: All NI pupils return to school after Easter...

It is the first time all pupils in Northern Ireland have been in school since before Christmas.
Read more

Thiem knocked out by Andujar in French Open first...

Two-time runner-up Dominic Thiem was knocked out in the first round of the French Open by Spanish journeyman Pablo Andujar 4-6 5-7 6-3 6-4 6-4 in the first major upset of the claycourt Grand Slam on Sunday.
Read more

"You have all brought me to tears," Skinner said in a tweet. "Thanks for being my biggest cheerleaders!"
Read more

A new generation of companies is homing in on one of the hardest problems in tech: replicating our sense of smell.
Read more

WiZ has almost fixed one of the biggest frustrations...

WiZ has expanded its Connected with WiZ program to include a range of Philips Smart LED bulbs, but sadly they’re not the Philips Hue bulbs we know and love.
Read more

Individuals suffering from Havana Syndrome have reported symptoms including vertigo, ear pain, nausea, and some have been diagnosed with Traumatic Brain Injury.
Read more

Critics accuses the justice secretary of not understanding the definition of violence against women.
Read more

Outdoor clothing brand Patagonia said it will stop supplying Jackson Hole Mountain Resort with inventory after one of the resort's owners held a fundraiser for the conservative House Freedom Caucus.
Read more

White House press secretary Jen Psaki on Thursday defended the Biden administration's decision to oust a handful of Trump appointees from military academy advisory boards, and also took a shot at some of those stripped of...
Read more

Paris Fashion Week is back in person again after 18 months of Covid-19 restrictions. Bloomberg's Angelina Rascouet reports from the runway with more on what's changed. (Source: Bloomberg)
Read more

The medical evacuation of at least two U.S. diplomats in Vietnam ahead of a visit by Vice President Harris has exposed the Biden administration’s struggle to answer questions surrounding so-called Havana Syndrome.  Hundreds of American...
Read more

From the 60 Minutes Archive: Inside the Collapse

In 2010, Steve Kroft spoke with Michael Lewis about his book “The Big Short” which explained how some of Wall Street's finest minds managed to destroy $1.75 trillion dollars of wealth in the subprime mortgage markets.
Read more

Elsa Weakens Yet Prepares to Batter Jamaica and Eastern...

Elsa, the Atlantics first hurricane of 2021, has weakened to a tropical storm and will deteriorate further over eastern Cuba and Jamaica on...
Read more

The couple shared a daughter, Seraphina, along with a granddaughter named Charlotte and their love story is one worthy of its own Hollywood production.
Read more

Watch as Finn Russell edges Scotland into the lead after a try review after Stuart Hogg's charge-down causes havoc in the Irish back line at Murrayfield.
Read more

A 6-year-old girl died Sunday on a ride at the Glenwood Caverns Adventure Park in Glenwood Springs, Colorado. The incident occurred on the Haunted Mine Drop attraction. CBS Denver reports.
Read more

How I met Cobie Smulders

Actress Cobie Smulders has been playing one part for most of her adult life. Now, the costar of “How I Met Your Mother” is turning the page as the hit comedy ends its nine-year run. Anthony Mason sits down with the Canadian actress to talk about the end of th…
Read more

Women will be barred from attending classes or working at Kabul University, the school's chancellor, who was appointed by the Taliban, announced on Monday."Folks! I give you my words as the chancellor of Kabul Univ...
Read more

Authorities confirmed Friday that a 9-year-old girl died in an apparent drowning last week after attempting to cross over the Rio Grande into the United States.
Read more

The Centers for Disease Control and Prevention (CDC) loosened its COVID-19 guidelines for summer camps, saying that vaccinated staffers and adolescents do not need to wear masks.The changes repre...
Read more

NBC anchor Chuck Todd is standing by his firm dismissal of critical race theory, getting into a combative exchange on Sunday's installment of "Meet the Press."
Read more

New Orleans is synonymous with jazz, and if there's one band that's synonymous with both, it would have to be the Preservation Hall Jazz Band. With the sounds of Mardi Gras still echoing in the streets, Lesley Stahl of "60 Minutes" heads to New Orleans to tra…
Read more

Microsoft's cloud storage service will be available as a universal app that runs on Apple's M1 chips later this year.
Read more

Early this morning a massive fire engulfed an apartment building in London. Dozens have been hospitalized and several people have died. Jonathan Vigliotti has more.
Read more

Colleen Hoover’s years as a published — and self-published — fiction writer have been one long, pleasant surprise
Read more

A judge has ruled to keep Connecticut's school mask requirement in place after it was challenged by a lawsuit filed in August, ...
Read more

Officers found a crowbar, hammers, bear spray and firearms after they corralled a group of about 100 protesters, Portland police said Saturday.
Read more

EXPLAINER: Why Poland wants state of emergency near border

Barely a year into Donald Trump’s presidency, Democrats were desperate to show they could reconnect with the white, working-class voters who had turned against them
Read more

A picture of Queen Elizabeth II sitting alone at her late husband Prince Phillip's funeral has drawn attention as COVID-19 restrictions did not alone for anyone to be close to the queen.Queen Eli...
Read more

The Bafta-nominated actress says the driver also refused to drive her to an accessible entrance.
Read more

The U.S. Space Force's newest and most advanced missile-warning satellite is in orbit
Read more

In letters to Virginia voters, Vote Forward tries to appear nonpartisan. It isn't. The post Democrats Want Virginians to Vote by Mail appeared first on The American Conservative.
Read more

Apple Watch is getting new Spotify features including offline...

Liberty Power, an electricity retailer that serves customers in about a dozen states, fired all its employees after suffering deep losses in the Texas freeze.
Read more

Three more U.K. energy companies were pushed out of business by sky-high natural gas prices, bringing to more than 1.7 million the number of customers who have lost their supplier and adding to pressure on the government to step in.
Read more

One-third of parents want to vaccinate 5- to 11-year-olds...

One-third of parents want to vaccinate their 5- to 11-year-olds "right away" when the coronavirus vaccine is approved for their age group, according to a new ...
Read more

First POS make bespoke point of sale systems for food and beverage outlets but is this the solution that's best for your business?
Read more

The women who hope to break the mould of...

There has never been a single woman of colour sitting at the Scottish Parliament in its 22-year history.
Read more

Abu Dhabi Wants To Revolutionize How the Middle East...

Tucked between the Gulf of Oman and a craggy mountain range, the dusty port Fujairah isn’t an obvious base from which to try and revolutionize the Middle East’s oil markets.
Read more

Faster DDR5 RAM should be in majority of PCs...

DDR4 memory has its days numbered, and next-gen DDR5 will start to take off from next year.
Read more

The Instant Pot Duo Crisp and Air Fryer offers a multitude of cooking methods but how does it stack up against rivals from Breville and Crock-Pot?
Read more

America’s film heritage preserved at the Library of Congress

From silent films and Hollywood classics through the Golden Age of television, the curators at the Library of Congress painstakingly maintain its archive of 1.4 million films and video recordings as a time capsule of America as told through moving images. Mar…
Read more

Sen. Ron Johnson (R-Wis.) said in an undercover video taken by a liberal activist that he supported the results of the 2020 election in Wisconsin, where former President Trump lost to President Biden."...
Read more

"I can hardly wait," said Wally Funk, one of the "Mercury 13" female aviators rejected by NASA in the 1960s, who will finally get to fly in space.
Read more

Covid: Macron calls on US to drop vaccine export...

The French president spoke out after the US backed a proposal to waive patents on Covid-19 vaccines.
Read more

Q&A: Marisa Monte on her first solo album in...

Capcom eyes PC as its main gaming platform, and...

Capcom is reportedly looking towards PC as its main platform for future game releases, and that's an extremely good thing.
Read more

After blazing to a European title, Lee McGregor on loss, love, ice cream, and his goal of becoming a multiple-weight world boxing champion.
Read more

8 of the Best ‘Bones Day’ TikToks After Noodle...

In 2021, the fate of your day rests in the paws of 13-year-old pug Noodle, who has gone viral for his "bones day" videos.
Read more

Democrat Carol Alvarado began speaking shortly before 6 p.m. Wednesday even though she acknowledged that the filibuster would not block the legislation.
Read more

An actor who was arrested earlier this year for allegedly defrauding investors of more than $650 million by falsely claiming to have deals with major media companies, agreed to plead guilty to one count of securities frau...
Read more

Chinese officials on Wednesday announced that giant pandas are no longer endangered after their population in the wild has increased to 1,800 following decades of efforts to preserve the species.With its larger pop...
Read more

World faith leaders gather to call for action on...