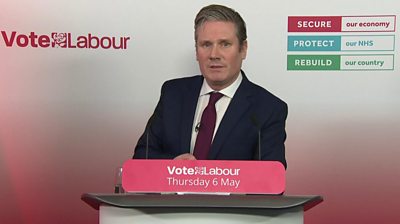 In a speech launching Labour’s local and mayoral elections, Sir Keir Starmer said that the Conservatives missed key opportunities to lockdown and went into the pandemic ‘unprepared.’

Following controversy over the proposed 1% increase to NHS workers’ salaries, the Labour leader pledged to reward healthcare and other key workers.

The Prime minister Boris Johnson recently praised ‘heroic’ NHS workers and defended the proposed pay rise, saying it was as much as ministers could give in the current climate.

We’ll be hearing from other parties about their election plans in the coming days.

Must see video: Piggy pigs out at snack time

We don't know much about this piggy, but he sure is making some interesting squealing noises as he noshes on potato chips.
Read more

The Scottish government provides £26m for the Aberdeen Energy Transition Zone to aid the move away from oil and gas.
Read more

Dan Ariely On How To Win By Betting On...

When is Veterans Day?

Memorial Day is coming up, but some people may be unaware of how it differs from another military holiday, Veterans Day.
Read more

The Category A listed structure in Edinburgh was added to the Buildings at Risk register in 2018.
Read more

More than 85,000 defects, including potholes, were recorded on NI's roads in the past 12 months.
Read more

Official: US to spend $3B for antiviral pills for...

The National Trust for Scotland wants to restore wetlands and woods on a south of Scotland estate.
Read more

How to mess with Texas’ anti-abortion bounty? Apply it...

Trump to be guest on Bongino’s debut episode of...

Former President Trump is slated to appear on the debut episode of Dan Bongino's radio show May 24. Cumulus Media's Westwood One ...
Read more

Operation Varsity: How the rich and famous cheated the...

The Tiger King producer on his new film about the scam involving US stars such as Felicity Huffman.
Read more

FBI to help school employees amid uptick in violence

Greensill did not get special treatment, says Sunak

Carrie Johnson: How much influence does the PM’s wife...

The PM's wife steals the show at a Tory LGBT+ event, but how much influence does she have?
Read more

Unworthy of the Sacrifice

Our leaders are like spoiled rich kids, breaking soldiers—their toys—with impunity. The post Unworthy of the Sacrifice appeared first on The American Conservative.
Read more

Android really wants to get Apple going on RCS...

The US president wants to await the outcome of a misconduct probe into NY Governor Andrew Cuomo.
Read more

Charges against two juvenile suspects who were apprehended following a June 12 shooting in Austin, Texas, have been dropped and a manhunt was underway for a new adult suspect in the case, authorities said Tuesday, according to a report.
Read more

Prof Neil Ferguson says there could be as many as 200,000 cases a day as restrictions ease.
Read more

The Biden administration on Thursday began to reimburse Florida school board members who were financially penalized for requiring masks in districts against Gov. Ron DeSantis's (R) executive order....
Read more

The House Progressive Caucus said Tuesday its members would not vote to pass a bipartisan infrastructure package unless the Senate first approves a $3.5 trillion plan to fund their preferred policies, signaling a potential battle between two wings of the Demo…
Read more

Senators ramp up efforts to create standards for self-driving...

Two key bipartisan senators are ramping up efforts to create standards for testing and deploying autonomous vehicles, with the renewed effort coming after years of roadblocks in the Senate to create a nationwide framework...
Read more

Virgin Media among those forced to share personal information on its customers.
Read more

Discovery CEO signs deal to stay on after WarnerMedia...

Discovery CEO David Zaslav will be named head of the new company being formed by the media giant's recently announced ...
Read more

Fauci says U.S. could get control of pandemic by...

Health officials are urging Americans to get vaccinated as most U.S. counties experience "high" coronavirus transmission. As CBS News' Manuel Bojorquez reports, Dr. Fauci says the nation could get control of the virus by next spring if more people roll up the…
Read more

England will be without pace bowler Anya Shrubsole for the start of the ODI series with an ankle injury.
Read more

A federal judge ruled Thursday that a Proud Boys leader charged in connection with the Capitol Riot will remain in jail. Judge Michael Harvey determined that Charles Donohoe will rem...
Read more

Asked if she will accept Paul Givan as first minister, Michelle O'Neill says deals must be honoured.
Read more

Fire erupts on the roof of the Louisiana Superdome

A fire erupted on the roof of the Caesars Superdome in New Orleans on Tuesday, CBS affiliate WAFB reported. V...
Read more

Su Bingtian has confirmed his strong form by clocking 9.98 seconds to win the 100 metres at China's national athletics trials for the Tokyo Olympics in Shaoxing, local media reported.
Read more

Personal information belonging to officers of the U.S. capital's primary law enforcement agency has been leaked on the dark web by a Russian-speaking ransomware gang.
Read more

Find out how you can benefit from both proactive and reactive security tools in our Heimdal Premium Security review.
Read more

AstraZeneca: US data shows vaccine effective for all ages

‘I smile at racists to silence them’ – Nigeria...

Tyler, The Creator Cruises On A Speedboat In ‘Lemonhead’...

Tyler, the Creator dropped a new video for his song “Lemonhead” on Thursday (July 8) and he doesn’t fail to disappoint with his zany directorial visuals as his alter ego Wolf Haley.
Read more

Genetic editing could change our relationship with the natural...

Neurobiology professor Dr. William Hurlbut tells CBSN's Vladimir Duthiers how genetic manipulation will change how we relate to one another and the natural world.
Read more

Hisense’s latest attempt to combine the big-screen joys of laser projection with the living room convenience of a TV rewrites the home cinema rulebook.
Read more

The COVID-19 death toll in India has passed 300,000 as a devastating surge of new infections shows no signs of easing
Read more

Why the China Evergrande Crisis Is Scaring Investors Around...

In China, a company called Evergrande promised to deliver apartments to some 1.5 million buyers, who are still waiting for their keys.
Read more

When the French Open’s third round gets underway Friday, there will be four men from the United States on the schedule — the largest contingent from the country to get that far in Paris in 25 years.
Read more

Complaints about how pupils will be assessed when they return to school make the front pages.
Read more

More than a dozen people are dead after a cable car line snapped in northern Italy on Sunday, causing a car to fall to the ground....
Read more

Man Tells Court Killing of Transgender Teen Was ‘Self...

A man accused of murdering Nikki Kuhnhausen, a 17-year-old transgender teenager, back in 2019 told the court that it was out of self-defense.
Read more

The delayed ban on TikTok and WeChat will now not happen - instead apps from China will face reviews.
Read more

Social Security will have to cut benefits by 2034 if Congress does nothing to address the program's long-term funding shortfall, according to an annual report released Tuesday by the Social Security and Medicare trustees.
Read more

Climate change: Whisper it cautiously… there’s been progress in...

Pledges made at the UN have lifted hopes for the Glasgow summit, but some major questions remain.
Read more

President Biden to focus on new vaccination milestones as...

President Joe Biden's top coronavirus adviser will focus on new vaccination milestones at the White House Tuesday as the country is expected to fall short of his stated goal of having 70% of US adults receive at least one Covid vaccine shot by July 4.
Read more

He will be campaigning alongside Melanie Stansbury ahead of the upcoming special election in New Mexico.
Read more

Taylor Swift Has A ‘Ruthless Game’ And Fans Are...

Taylor Swift posted a new teaser for her 'Red' re-recording that included a red video of a vault revealing several words that need to be unscrambled. She also included a follow-up tweet, stating, 'Your next clue will be in the spot where you hear red…'
Read more

Biden says no evidence Russian government was involved in...

Biden said that Putin still bears "some responsibility" to respond since DarkSide, a cybercrime gang the FBI says is responsible for the attack on a U.S. gasoline line.
Read more

He is accused of ignoring Welsh Labour ministers' insistence on travellers use higher-cost tests.
Read more

Some of the staff members have already arrived at the airport protected by U.S. troops ahead of a likely onslaught by the militants who have swept across the country in recent days.
Read more

Karen Olick, chief of staff to Secretary of Homeland Security Alejandro Mayorkas, announced on Monday that she would be stepping down from her position at the end of the month....
Read more

Fundraising is due to start in June on the anniversary of the Forces' Sweetheart's death aged 103.
Read more

The NHS initiative, for people in England over the age of 40, could save thousands of lives.
Read more

Zuckerberg's net worth has been plummeting, with his company losing value since mid-September, when leaked internal documents were first published.
Read more

The pop star says she won't endorse the government's legislation, saying it is full of "loopholes".
Read more

Trebek's son, Matt, and daughter, Emily, accepted the trophy from behind the host's podium on the quiz show's set.
Read more

Utah police called on Gabby Petito and boyfriend before...

Utah police responded to a call involving Gabby Petito and her boyfriend Brian Laundrie roughly two weeks before the young woman went missing, according to a police report ...
Read more

Covid outbreak at US Embassy in Afghanistan grows

The Covid-19 outbreak at the US Embassy in Kabul has grown to 159 cases, according to a diplomatic cable sent Tuesday, as a devastating third wave of the deadly disease continues to hit Afghanistan.
Read more

75% of semiconductors are made in Asia. In cars, the microchips power things like brakes, airbags and windshield wipers. General Motors and Ford are among the U.S. automakers that have faced big production cuts because of the parts shortage. Lee Cowan recentl…
Read more