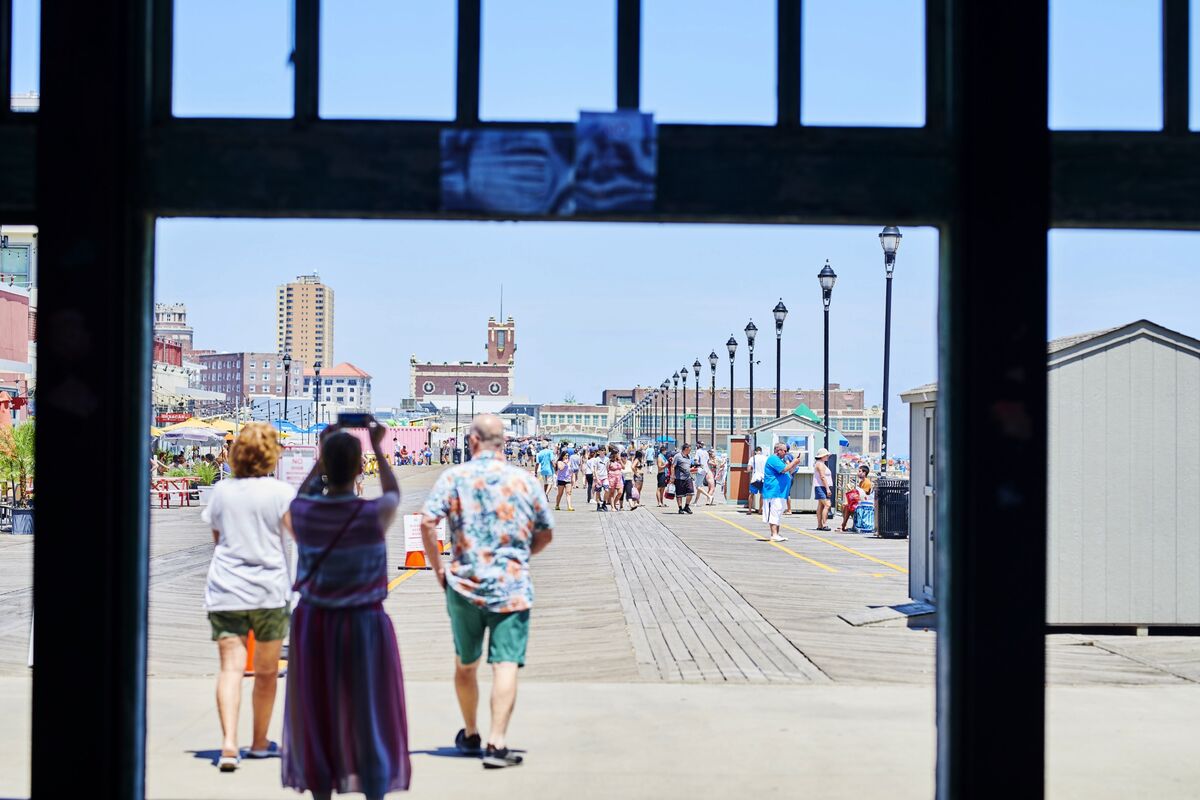 Asbury Park, the New Jersey shore town where Bruce Springsteen rose to fame with songs about hardscrabble blue-collar life, had its credit rating raised one grade by Moodys Investors Service, thanks to new residential and commercial development.

The popular summer destination, where Springsteen gained renown in the late 1960s and early 1970, was upgraded by Moodys to A1, the fifth-highest investment grade, from A2. Tourists and second-home owners are propelling the the local economy, which contrasts with the citys poor full-time residents.

Although the citys resident wealth and income levels are weak, they are improving, Moodys said.

Asbury Park was famous for its rides and arcades through the mid-20th century before beginning a long decline. In recent years, a growing gay and artistic community has helped bring back sections of the city and spawned a craft brewery scene. The citys $1.9 billion tax base has grown 5.6% annually over the past four years as developers built new luxury townhouses and condo and hotels.

Springsteen named his first album Greetings from Asbury Park, N.J. and performed at venues like the Upstage Club and The Stone Pony with Steve Van Zandt and Southside Johnny.

With assistance by Elise Young The town has seen a sharp spike in Covid cases - driven by the emergence of the Indian variant.
Read more

Canadian Prime Minister Justin Trudeau on Thursday nominated Mahmud Jamal to the Supreme Court of Canada, the first person of color to be nominated for the country’s high court.Jamal has been on the Court of Appeal for Ontario since 2019, and he...
Read more

Family of Austin Tice calls on Biden to help...

The family of Austin Tice, the American journalist and former Marine who has been held captive in Syria for nearly nine years, is calling on President Biden to prioritize securing their son's safe release....
Read more

A renewed focus on voting laws by four candidates trying to appeal to convention delegates underscores how much this issue is on the minds of Republican voters.
Read more

A "deep dive" of the 2020 election compiled by House Democrats blames bad polling that underestimated voter turnout by supporters of then-President Trump, as well as effective messaging by House Republicans that focused on the far left’s "defund the police" m…
Read more

NBC anchor Chuck Todd trended on Twitter after a Daily Show producer accused him of being a “Republican plant” on Sunday night.
Read more

Texas’ ban of vaccine mandates puts businesses in a...

Armed Standoff With Police Shuts Down Part of I-95

Wakefield, Mass. (AP) -- A group of heavily-armed men are engaged in an ongoing standoff Saturday with Massachusetts police, prompting shelter-in-place orders in some areas and sparking massive delays on the holiday weekend as a portion of Interstate 95 remai…
Read more

Five people were shot in Shreveport, La. late Sunday evening in the third mass shooting in the U.S. in just 24 hours....
Read more

Las Vegas is bouncing back, but the virus is...

Fifteen months after the pandemic transformed Las Vegas from flamboyant spectacle to ghost town, Sin City is back
Read more

Students in England, Wales and Northern Ireland are told their A-level and BTec results.
Read more

The Duke of Edinburgh's life was filled with contradictions but will be remembered most for his unstinting support of the Queen.
Read more

Whoa, That ETF Got Big

The Powerball jackpot has quietly crept back to nearly $200 million while the country raves over $1,400 stimulus payments.
Read more

Lionel Messi: Paris St-Germain in talks with Argentine after...

Paris St-Germain are in talks with Lionel Messi's representatives about the Argentina forward joining the Ligue 1 club following his Barcelona exit.
Read more

Senators are set for a high-stakes battle over one of Democrats' biggest priorities that could have repercussions not only for the 2022 midterm election but the Senate itself.The Senate Rules Com...
Read more

Covid-19: Close-contact pupils ‘should not be sent home from...

Sara Cox is to make history as the first woman to referee a Premiership game.
Read more

Erykah Badu apologizes for being ‘terrible guest’ at Obama’s...

Two hijackers threatened to blow up a Libyan airliner carrying 118 passengers and crew unless their demands were met. The hijackers later surrendered to police in Malta, after everyone on board was released safely.
Read more

George Floyd’s death was a year ago and traumatizing...

As people remember the anniversary of George Floyd's death, traumatizing details may be triggering for some. Here's expert advice on how to decide if it's best to watch videos and how to cope.
Read more

Ronald Greene, a Black man who died after a pursuit by Louisiana State Police in 2019, can be heard apologizing to officers and telling them he was scared before being tased, dragged and kicked in newly obtained body camera video by the Associated Press.
Read more

Nicaraguan police arrested a half dozen more opposition figures, including the sixth presidential hopeful to have been arrested in a crackdown that started last month
Read more

LGBTQ Rights Around the World

Acceptance of LGBTQ people is growing around the world, but the community is also seeing hard-earned rights being rolled back in some areas. Bloomberg’s Rebecca Greenfield reports on “Quicktake Charge.” (Source: Bloomberg)
Read more

Watch some of the best action as USA beat Japan 90-75 at Tokyo 2020 to win their seventh consecutive women's basketball gold.
Read more

Match of the Day pundits Alan Shearer and Danny Murphy discuss the increasing influence of Liverpool defender Nat Phillips, describing him as the "best player on the pitch" against Burnley as the Reds win 3-0 to improve their chances of finishing in the top f…
Read more

Bill Clinton: Former US president in hospital for ‘non-Covid...

The former US president is said to be "on the mend" and in "good spirits" in hospital in California.
Read more

White supremacists still on the march

Perhaps the "White Lives Matter" marches will amount to little more than a small number of disgruntled people expressing their angst, but the fact that such events have even been planned is cause for concern.
Read more

Microsoft wants to get rid of the office landline...

Microsoft is doubling down on VoIP support in Teams with new capabilities and features for Teams Phone.
Read more

The shadow chancellor is sacked by Sir Keir Starmer as Angela Rayner is moved to shadow Michael Gove.
Read more

Nolan Arenado smacked a go-ahead single in a fifth-inning rally to lift the St. Louis Cardinals to a 4-2 come-from-behind win over the Washington Nationals.
Read more

France is preparing to impose new restrictions on travelers from four countries in an attempt to keep out more infectious COVID-19 variants....
Read more

US seeking to boost electric vehicle material production in...

The U.S. government is in seeking to boost Canadian production of minerals and materials that are critical to make electric vehicles, according to a report from ...
Read more

Top Senate Dem on terrorist investigations: “It isn’t a...

Top Senate Democrat on the Select Committee on Intelligence, Dianne Feinstein, D-California, supports new legislation that stalls gun purchases for any individual who has been on a terror watch list. Less than 1% of names on the terror watch list are American…
Read more

Bandzoogle provides all the tools a band needs to create an online presence to grow its fanbase while selling music, tickets and merch.
Read more

Greg Gutfeld: Almost all the media’s handiwork is a...

Fueled by their own narcissism, the media elevated Avenatti so they could look cool. Overlooking the obvious red flags everyone else could see.
Read more

Falkirk High School will also move to remote learning for a week from Friday as a precautionary measure.
Read more

In a matter of days, Pfizer CEO says they’ll...

Pfizer/BioNTech plans to ask for authorization of a Covid-19 vaccine for children under 12 soon, bringing the US one step closer to offering protection to a population that has grown particularly vulnerable as the fall season gets underway.
Read more

Violence in Brazil's Amazon is increasing, with tens of thousands of illegal miners in protected areas.
Read more

Copa America 2021: Everything you need to know

Everything you need to know about the 2021 Copa America, as Brazil attempt to defend their title.
Read more

A judge in Bolivia has ordered former interim president Jeanine Áñez held for four months in pre-trial detention following her arrest on charges linked to the 2019 ouster of socialist leader Evo Morales, which his supporters consider a coup détat
Read more

Lady Gaga dog-walker Ryan Fischer ‘had to have part...

Ryan Fischer was shot in the chest as he walked the star's three French bulldogs in February.
Read more

Amazon has launched a new technology that the company says will enhance the performance of some of its internet-connected devices. But Amazon Sidewalk also uses the Wi-Fi within millions of American homes, and that has some privacy advocates concerned. CBS Ne…
Read more

Starfield gets a November 2022 release date, and isn’t...

Bethesda Game Studios' next big RPG has a release date - and it isn't coming to PS5.
Read more

The clinic is for central Bristol residents who have been unable to get a jab due to accessibility.
Read more

A man suspected of strangling his wife, Instagram influencer Alexis Sharkey, was found dead on Wednesday in Florida, according to law enforcement.
Read more

El Chapo’s former safe house to be raffled off...

The house was the scene of one of the drug lord's dramatic escapes from Mexican security forces.
Read more

The PM should say who paid for his Downing Street flat refurbishment, says the shadow health secretary.
Read more

USA's Simone Biles returns to competition with a strong performance in the beam final and wins bronze at the Tokyo Olympics.
Read more

“History UnErased” on a mission to bring LGBTQ topics...

"History UnErased" is bringing LGBTQ topics into the mainstream curriculum in U.S. classrooms. Debra Fowler, co-founder and executive director, joined CBSN to discuss the importance of the program.
Read more

Venable on Wednesday said it has picked up online security, privacy and safety pro Hemanshu (Hemu) Nigam, a former prosecutor with years of experience serving in chief security officer and business roles at companies.
Read more

Hulu free trial: is one available and how to...

Want to give a new streaming service a whirl? Check out the Hulu free trial availability and how it works right here with our guide.
Read more

Only one governor has been removed in state history.
Read more

As the country celebrates 241 years of independence, Americans are exercising their right to speak freely -- to their representatives in Congress. Omar Villafranca reports.
Read more

The statue of former President Theodore Roosevelt that sits in from of the the American Museum of Natural History will be taken down after officials voted unanimously to do so on Monday.The New York City Public Des...
Read more